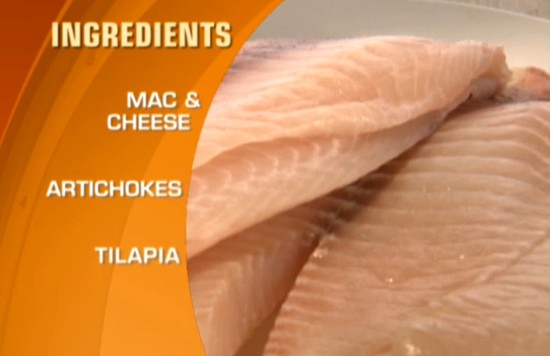 Aphrodisiac or poison? YOU make the call!

Previously on Midlife Crisis Crossover: with weeks to go till vacation and no pressing obligations, my wife Anne and I have been bingeing a few different shows together, while I’ve done some additional grim watching on the side. Certainly not through careful planning on our part, each of the shows has had their own depressing and/or tragic aspects. Veronica Mars season 4 had its mad-bomber mystery and its upsetting finale. Season 2 of Hulu’s Light as a Feather made teen horror out of a slumber party game. The Netflix documelodrama The Last Czars reminded us Russian history is grimmer than many of our TV stories, and trying to cheer your audience up with cult orgies doesn’t help.

This summer we’ve even managed to find oppression and despondency in the things we’ve loved and watched for years. We expected nothing less from Veronica Mars. It paled before the dark side of Chopped.

END_OF_DOCUMENT_TOKEN_TO_BE_REPLACED

Who among us has never looked at a bag of Cheetos and thought, “I bet I could turn this into haute cuisine”?

For years my wife Anne and I have been addicted to the Food Network’s cooking-competition series Chopped, in which four chefs must outcook each other under strictly timed conditions using four specific ingredients. Inside every Chopped basket of goods lurks a surprising combination of the rare, the delicate, the expensive, the complicated, the whimsical, the outlandish, and/or the thoroughly disgusting. Every substance can be used, though not every substance is very good.

Food Network continues gifting us with new episodes every week hosted by the amazing colossal Ted Allen, who presides over this fast-paced showcase for chefs of every conceivable demographic from various American restaurants, caterers, bakeries, or other private businesses, each of whom keeps their eyes on the $10,000 prize to be had if they’re the last entrant remaining after three grueling courses of speed-heating, kitchen-racing, and power-serving.

After watching several dozen episodes, Anne and I began to notice recurring patterns and tried to capture those observations and our fandom back in 2014 with a previous MCC entry called “How Not to Get Chopped from ‘Chopped’: A Starter Guide“. I’ve been meaning to overhaul that entry for a while now that we’re four years and literally 200+ episodes later, which includes every episode of the kids-only spinoff Chopped Junior and a handful of episodes of Chopped Canada, which was an interesting effort with its own angle and demeanor but wasn’t quite the same thing. I’m ashamed to confess it was tough to watch for more than a few minutes before I started poking fun in a goofy faux-Fargo accent.

The following compilation is our revised armchair-chef advice for future would-be competitors on how not to do Chopped from where we sit. This list is doubtlessly far from complete, and we welcome any additions in the comments below, especially from those among you who can truly cook. Though neither of us is a trained gourmet by any stretch, we hope this helps someone out there anyway. If you raise a skeptical eyebrow at any of these, well…it’s positively flabbergasting how many of these downfalls we’ve seen happen in actual episodes at the hands of trained professionals who run fantastic eateries back home but who lose their poise in front of the cameras. Even the best can make mistakes or watch their plans spin out of control.

END_OF_DOCUMENT_TOKEN_TO_BE_REPLACED

True story: Chef Alex is the first person we’ve ever met at a show who mentioned jazz hands in a Q&A before we even had the chance to ask.

Last year my wife Anne and I had the pleasure of attending the inaugural Fantastic Food Fest at the Indiana State Fairgrounds, planned by its creators at Circle City Expos as an annual event bringing together the best and brightest providers from numerous restaurants, markets, farms, caterers, bakeries, and other tremendous sources of locally sourced ingredients and cuisine under one roof for foodies to gather and escape winter doldrums. Year One’s big show brought in a headliner we loved to meet, Chopped host and hometown hero Ted Allen. If the show was successful, we figured we’d return regardless of the guest list.

As Chopped fans, we weren’t disappointed. Year 2 brought in a related special guest all the way from New York City, Iron Chef Alex Guarnaschelli, the Chopped judge most likely to deliver a ruling composed entirely of clever metaphors. Alex summed up the order of the day as she opened her 1:30 cooking demo: “It’s time to eat and cook and forget about a whole lotta other things for a while.”

END_OF_DOCUMENT_TOKEN_TO_BE_REPLACED 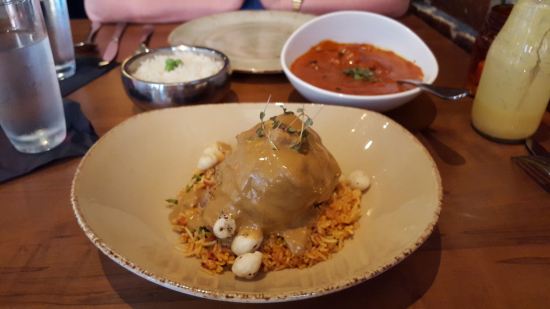 Our feature for the entree round: Kashmiri Spiced Braised Lamb Shank.

Our eleventh wedding anniversary fell on Day Seven, but scheduling needs and fannish impatience dictated that we celebrate on Day Six. Longtime MCC readers know Anne and I are big fans of the Food Network’s fun, addictive cooking competition series Chopped. Most of its judges are restaurateurs and chefs who call NYC their home, but we were surprised during our vacation research to discover one judge owns a restaurant within 500 miles of our house and right along our path. We agreed it was a mandatory dinner stop.

END_OF_DOCUMENT_TOKEN_TO_BE_REPLACED 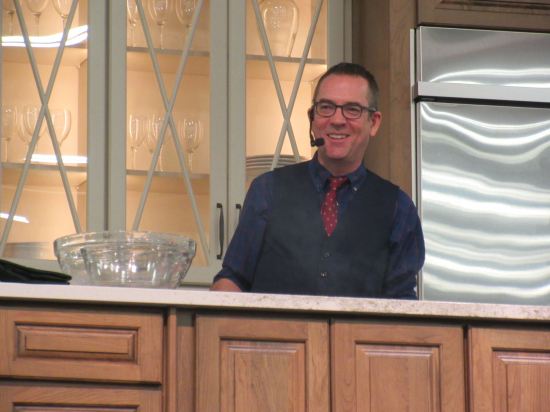 Longtime MCC readers know my wife Anne and I are big fans of Chopped, the fast-paced chef-vs.-chef game show that’s like the lynchpin of the Food Network Cinematic Universe. When we heard host Ted Allen would be appearing here in Indianapolis this weekend, obviously we were in.

Allen was the headliner among several special guests at the inaugural Fantastic Food Fest, hopefully an annual event bringing together the best and brightest providers from numerous restaurants, markets, farms, caterers, bakeries, and other tremendous sources of locally sourced ingredients and cuisine. All things considered, the alliteration of “Fantastic Food Fest” rings better than, say, “Indy Foodie Con”.

END_OF_DOCUMENT_TOKEN_TO_BE_REPLACED

[Due to circumstances entirely under our control, we here at Midlife Crisis Crossover are taking a much-needed getaway for reasons that should be easy for any longtime readers to guess. Trust me when I say we’ll have plenty of new stories to share upon our return. We ask for your prayers and kind hopes that the preceding statement doesn’t turn out to be grim foreshadowing to a brutal cautionary tale.

So! While we’re retreating, recharging, renewing, rejuvenating, and restocking our production stations, please enjoy the next several daily entries’ worth of Fun Moments in Food from our past fifteen months. As a proud “nicheless” blog, MCC skips around from topic to topic depending on where all the whims lead, so if this all-foodie salute isn’t your favorite thing ever, rest assured we’ll get back to geek stuff and/or normal stuff viewed through geek lenses rather shortly. Updates as they occur. Enjoy!]

Dateline: my birthday, May 2014. My mom wanted to take us out to dinner. I picked a Mexican place in Brownsburg called Tequila Sunrise for two reasons: one, I was in the mood for it. Two: their menu items contained words we’ve never heard beyond episodes of Chopped.

END_OF_DOCUMENT_TOKEN_TO_BE_REPLACED 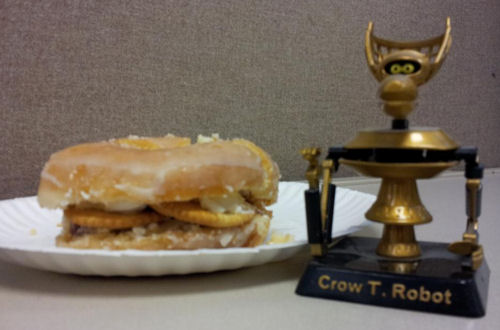 The picture and my plate both looked too plain, so I added Crow for garnish. Maybe it’s not something you would do, but I’m an otherwise reasonable adult and I’m perfectly happy with my garnish choices.

Pictured above is my newest creation, inspired by frustrated circumstances. It’s a stale Marsh donut sliced in half bun-wise, filled with one layer of chipped-beef-‘n’-cream-cheese from the best kind of cheese ball, one layer of Ritz crackers, and one layer of plain cream cheese. I dubbed it the Good Afternoon Burger. It would’ve been even better if someone had thought ahead and brought in some rich, creamery butter to use as dressing. They had veggie dip, but that’s the absolute opposite.

END_OF_DOCUMENT_TOKEN_TO_BE_REPLACED

[Special note for this historic occasion: 70% of the following entry was written by Midlife Crisis Crossover’s very first guest contributor, my wife Anne. She knows I welcome her input anytime — above and beyond her ongoing, invaluable photo contributions — but she’s never taken me up on my standing offer on a writing basis till now. Remember: the more you applaud and embrace this entry, the more leverage I’ll have in wheedling her for more contributions in the future.]

Blame our 2013 road trip for this entry. We discovered the Food Network’s Chopped while flipping channels late Tuesday night in our Boston hotel room. The concept of this cooking-competition series is cerebral and daffy at once: four chefs are given a basket filled with four different ingredients that must be transformed and worked together into a single course, even if they don’t go together, even if they don’t go with the course in question (e.g., meats in the dessert rounds), even if they’re the vilest substance on Earth (durian!), even if mishandling the ingredients might kill put one of the judges in the hospital. (We’ve never thought that last one was a good idea…) The winner selected by three judges earns $10,000.00. The rest are treated to an empty-handed walk down the Hallway of Disappointment, with reactions ranging from excited letdown to disgusted fury to indignant self-hatred to horrific realization that defeat has destroyed their livelihood. The show can be funny and inspiring and tear-jerking and tragic in the space of a single episode.

After vacation we marathoned every Chopped episode available On Demand, caught many of the Tuesday and Thursday reruns, and are now keeping up with new episodes each week. Even though we’re recent converts, we’ve been taking mental notes along the way of the errors and omissions that occur with the most frequency, from the stupefyingly obvious to the obscure-but-fatal. Just in time for the upcoming Chopped five-part “Tournament of Stars” miniseries (yay celebrity contestants!), the following compilation is our armchair-cook advice for future would-be Chopped competitors based on the dozens of episodes we’ve devoured to date. This list is far from complete, and we welcome any additions in the comments below, especially from those among you who can truly cook. Though neither of us is a fancy gourmet chef by any stretch, we hope this helps anyway.