Longtime MCC readers know my wife Anne and I are big fans of Chopped, the fast-paced chef-vs.-chef game show that’s like the lynchpin of the Food Network Cinematic Universe. When we heard host Ted Allen would be appearing here in Indianapolis this weekend, obviously we were in.

Allen was the headliner among several special guests at the inaugural Fantastic Food Fest, hopefully an annual event bringing together the best and brightest providers from numerous restaurants, markets, farms, caterers, bakeries, and other tremendous sources of locally sourced ingredients and cuisine. All things considered, the alliteration of “Fantastic Food Fest” rings better than, say, “Indy Foodie Con”.

Over 200 participating entities were on hand to exhibit their wares, hand out tons of free samples, sell creative groceries, spark new ideas, conduct cooking demos, teach cooking classes (Japanese, Italian, kids’ cooking, etc.), and more more more. A few non-food vendors sneaked in and plied their wares as well and added their coins to the FFF war chest, though it was cool to see FFF is a rare convention not to invite any of those intrusive Sugar Glider peddlers.

First vendor inside the front door was also the only one to bring a food truck. Graeter’s is actually from Ohio, but they brought ice cream and Cincinnati isn’t that far out of bounds. We forgave them.

They brought free cups of two different flavors: vanilla bean, which I’m sure was fine; and their signature Black Raspberry Chocolate Chip. We approved. 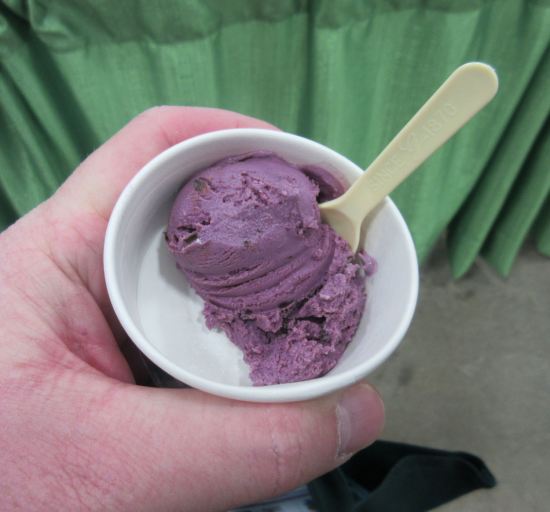 For dairy concerns closer to home, Traders Point Creamery brought a number of cheeses (brie is SO weird to me) and a few kinds of yogurt, of which I can vouch for the Banana Mango flavor. 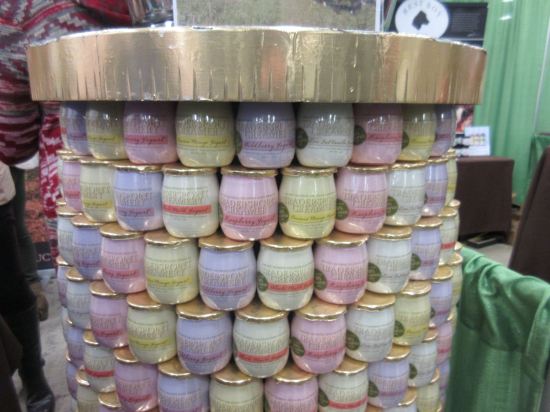 One of my favorites was Market District, which is apparently some kind of foodie paradise up in the upscale suburb-turned-city of Carmel. We live far away from there, but we may have to take advantage of today’s nostalgic mid-1990s gas prices and plan multiple field trips in their direction. They had one booth in the Tasting Pavilion selling thick mini-tenderloins and Cuban pork sandwiches…

…and another double-sized booth with free cups of two kinds of lemonade, plus some kind of bowl filled with what we think were olives the size of jawbreakers. Later in the afternoon, they began carving pieces out of a gargantuan, four-year-old wheel of parmigiano reggiano cheese that would send Wallace and Gromit into convulsions. It nearly did the same for me. I’m not the kind of guy who gets invited to cheese-tasting soirees, but that one bite from this rich, salty, enormously flavorful parmigiano reggiano wheel may have been the closest I’ve ever come to having a truly mystical food experience. Suddenly I knew the pain and longing of every cheese-fiending rodent in every cartoon ever. I wondered if I could trick Frasier and Niles Crane into adopting me and bringing me to their high-society galas that serve these as hors d’oeuvres. Hopefully they’d overlook the part where I wouldn’t touch a single drop of wine.

Our one photo of the cheese wheel is lousy. I don’t care. That wheel demands to be observed. And I doubt there’s a single one of these within five miles of our house.

Near the end of the day, Ted Allen talked about an Iron Chef America episode in which Mario Batali carved a valley into one of these blocks and used it as a de facto pasta-tossing bowl. I nearly cried as I tried to imagine how it would feel to develop the greatest pasta dish in the history of the universe.

If you’re wealthy and need to make this happen in the comfort of your own manor, Williams-Sonoma will sell you an eighty-pound parmigiano reggiano wheel for $2,499.99 plus $100.00 shipping and handling. If you’d mail me a 5% finder’s fee, which works out to four pounds, I’d greatly appreciate it and would totally add you to our Christmas card list.

Other practitioners of the gourmet arts who brightened our day and overwhelmed our palates included but weren’t limited to:

* Barbecue and Bourbon on Main (one of the few businesses actually on our side of town, and purveyors of tasty ribs)
* Chocolate for the Spirit (took me on a tour through the many nuanced levels of dark chocolate)
* The Garden Table (juicers who fascinated me with their Amped Almond juice, which combined almonds with coffee, dates, vanilla beans, and Himalayan pink sea salt)
* Healthy Hoosier Oil (best fried foods on the premises thanks to sunflower oil)
* Master’s Hand BBQ (the competition between sauce makers was tough, but they won me in the end)
* Urban Ladle (artisan soups — thumbs-up to their turkey chili)

…and I dearly wish I could recall which bakery was handing out li’l orange hibiscus cakes. Those were a delight worth remembering, but my memories and our collection of bakery fliers are failing me. We loved the freebies so much that we even spent money on a few parting gifts to augment our home menu in the days ahead.

Beyond the food, there were of course the personalities. Some were chefs from various local four-star establishments. One was a young lady who’s been on Rachael Ray’s Kids Cook-Off. Aficionados of the wide world of basic-cable cooking shows may also recognize Top Chef‘s Hugh Acheson, who’ll be appearing on Sunday, or local star Loreal Wilson, a.k.a. the “Butcher Babe”, who was previously on Food Network Star and won a season of Cutthroat Kitchen. She held a midday demo and stuck around for a while afterward to let the audience ask more questions and try the dish.

She seemed cool. We regret we just haven’t watched the right shows. 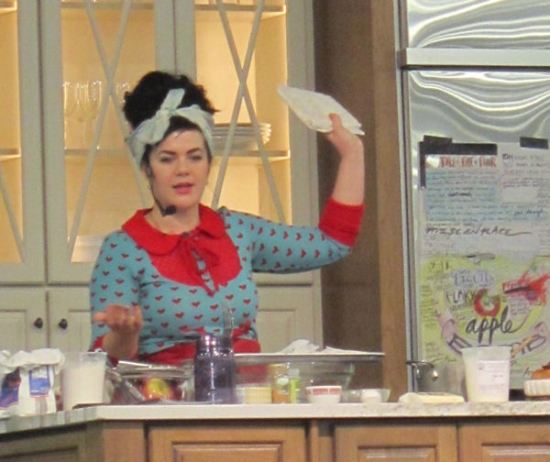 And then there was Ted Allen. The man, the myth, the heartbreaker who’s had the solemn duty to tell over a thousand skilled chefs, “You’ve been chopped.” He held one demo in the morning, took a break for an autograph session, then returned for an encore near the end of the day. Our acting MC was Julia Moffitt, morning news anchor for local NBC affiliate WTHR.

Our seats for the first session weren’t great, but we were happy just to be there. Fun thing we learned this week: Ted’s a native Hoosier. He was born in Ohio (there’s them inching onto our turf again), but moved to Indiana at age 7, grew up in the Carmel school system, and later graduated from Purdue (my son’s school!). He lives in Brooklyn, which is a much easier commute to where Chopped is filmed, but he still has family here.

All of Ted’s works today came from his 2012 cookbook In My Kitchen: 100 Recipes and Discoveries for Passionate Cooks. At the first session he walked us through two recipes, Chicken Palliards with pancetta and sage (page 131, a pic of which he posted on Facebook in advance) and Duck Fat Potatoes with parsley and lemon (page 93). Even from a distance and/or through the overhead camera, everything looked scrumptious.

While he worked (with occasional light assistance from a few chefs repping on behalf of Ivy Tech) Julia moderated audience questions. Among the fun stuff we learned throughout the day:

* Over 100 episodes of Chopped were filmed in 2015 alone (which would explain why Food Network was airing new episodes twice-weekly for a while) in addition to a thirteen-episode debut season of the must-watch Chopped Junior, and the pace isn’t slowing for 2016.
* The show is filmed at such a rapid pace in advance that their Thanksgiving and New Year’s Eve 2016 episodes have already been shot.
* Each episode takes twelve hours to film, and some scenes and seconds may be edited out of order for effect, but the three rounds themselves are run without stopping and kept strictly within the 20- or 30-minute limits as stated on the air.
* He’s a big fan of his mom’s cooking, as well as one local eatery whose identity anyone from Indianapolis should be able to guess.
* He’s a huge fan of mustards.
* His favorite episode to date was “Class Acts” — the first to employ a “lunch-ladies” theme, in which four school chefs competed for charity with hearts as big as the world. It’s his favorite not for the competition itself, but for the kindest acts that occurred as a result during and after filming.

At the second session we made sure we had better seats. Duck Fat Potatoes were still on the menu for anyone who missed the first meal, but our main course this time was Grilled Skirt Steak with Roasted Jalapeno Chimichurri (pg. 108).

Despite the odd moment I clicked the button, I promise Ted wasn’t trying to karate-chop the steak to the right texture.

Nor was he showing us how he’d referee an IU/Purdue football game, though he did ask the current whereabouts of the Old Oaken Bucket. 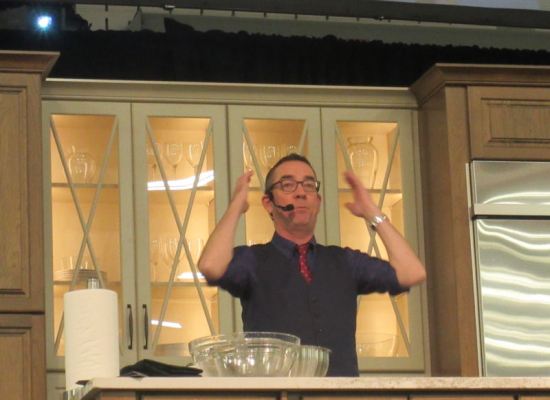 Nor was he doing his best Bond-villain impression. He listened politely to each fan, and was especially kind as kids in the audience weren’t afraid to speak up and ask pretty intelligent questions of their own.

In between was the autograph line. Funny story about that: we went straight from the first demo to the line, 45 minutes before he was scheduled to start. As Wizard World veterans, we’re used to autograph lines and long waits. We turned up third and fourth in line. We bided our time, we said our gracious hellos, I sounded like a dork, they offered to take a photo using Anne’s camera, and we walked away excited about the moment.

Away from the table, we then checked the camera. No photo. At all. Somehow it just didn’t go off.

We walked around for a bit and tried not to punch anything in disappointment. After about 15-20 minutes of blowing off steam and gorging on more samples, we returned to the line about twenty till 3:00, when Ted was supposed to take his leave. The line was shorter than we expected. We got back in line again. A few minutes later, The Powers That Be capped the line behind the couple behind us.

We waited patiently yet again. Right around 3:02 we asked humbly for a retake. By this time Ted had been joined at the table by a very special guest: his mom.

And then we got out of the way so the one last couple behind us could enjoy their moment.

Even setting aside the Ted Allen, the Fantastic Food Fest was a worthy, broadening experience. 2016 will mark Indiana’s statehood bicentennial, and we discussed the idea of trying to find more Indiana activities as our own little way of celebrating where we’ve lived all our lives. Friends of ours can already guess which two geek conventions are most likely to make that list in the months ahead without even trying, but we’re curious to see what else is going on this year ’round these parts, even if it means driving all the way up to Carmel to find it.