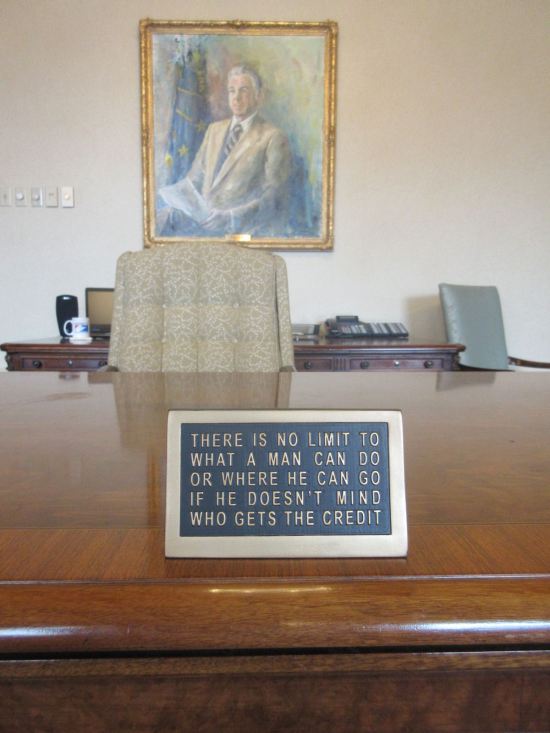 This desktop quote in the Indiana Lieutenant Governor’s office encapsulates the novel ideal of humility in public office.

Previously on Midlife Crisis Crossover, waaaay back in January 2016:

2016 will mark Indiana’s statehood bicentennial, and we discussed the idea of trying to find more Indiana activities as our own little way of celebrating where we’ve lived all our lives. Friends of ours can already guess which two geek conventions are most likely to make that list in the months ahead without even trying, but we’re curious to see what else is going on this year ’round these parts…

On October 15th, downtown Indianapolis hosted a very special convention of sorts to mark the occasion. The “Hoosier Homecoming” was a celebration held at the Indiana State House in honor of Indiana’s 200th birthday, with a host of well-known local faces in attendance, an opportunity for self-guided tours of the State House, and the closing ceremonies to the Indiana Torch Relay, a 37-day event in which a specially lit torch — not unlike the Olympics’ own, but inspired by the torch on our state flag — traveled through all 92 Indiana counties by various transportation methods until its final stop in Marion County at the Homecoming.

We were grateful for the turnout. We were appreciative of the chance to see where our local government conducts its business and works at improving our lives. And we were surprised by the politicians who cared enough to join the festivities.

We expected the State House tours to be fifteen minutes of us walking around the rotunda, glancing at rows of locked doors, and exiting unaffected. Shockingly, the State House was set up to allow access to several important rooms. A few had obviously been straightened and festooned with temporary displays for us looky-loos, while others held just enough day-to-day office decor to add a touch of authenticity to our walkabout.

The Indiana Senate Chambers were largely deserted except a lone volunteer to rerun an intro video and answer questions for the curious. 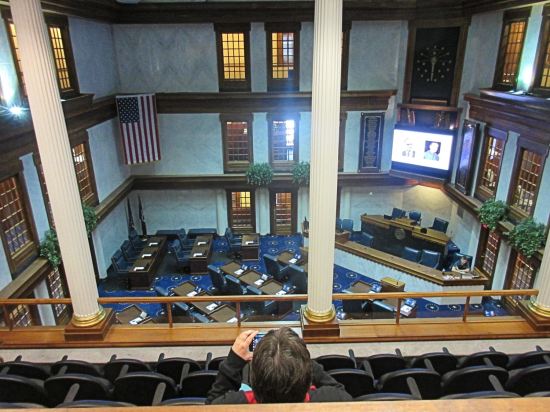 This was clearly Anne’s chance to vote in as many new bills as possible before the real Senators return to office.

The Indiana House Chambers refused to settle for mere museum solitude and hosted live demos teaching citizens what it’s like for Indiana Congresspeople to take turns extolling the virtues of, or condemning the excesses of, each of the various bills that reach their desks over the course of a session. During the role-play that we walked into late, a fake bill was under consideration to increase the state speed limit. Audience members who were interested in participating were handed a script to read at the podium in front of the rest of us as well as special guest Brian Bosma, the actual Speaker of the Indiana House of Representatives multiple times since 2004.

In this exclusive Midlife Crisis Crossover amateur video, we see my wife joining the group performance as Anne Golden, Action Congresswoman, strongly in favor of raising our speed limits so that her dear husband can keep his reflexes sharp and his temper chill:

A few other civilians read before and after her, including one gentleman who admittedly went “off-script”, but he sounded pretty much in line with the disagreeably genteel side of Indiana politics that’s closer to the everyday reality when it’s not election season.

After the vote and the demo came to a close, the esteemed Mr. Bosma was happy to pose with fans. 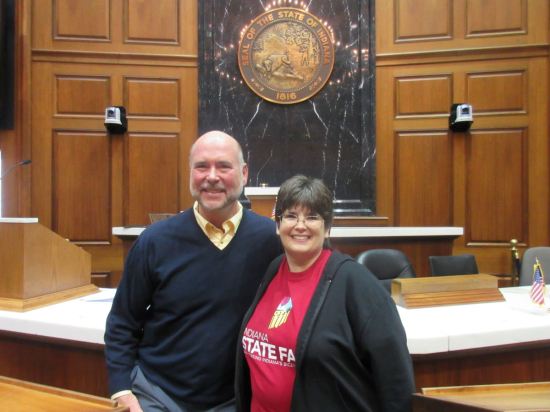 We know Bosma’s name from many, many articles in our hometown’s own Indianapolis Star.

The Indiana Supreme Court Chambers had only a pair of volunteers on hand to explain their setting and practices, none of our current Justices.

Sadly, the judges’ seats were walled off so we couldn’t sit up there and preside over some really expansive mock amendments.

Not to be outdone, the Indiana Office of the Auditor brought in their own colorful displays, multiple cheery volunteers, and actual Indiana State Auditor Suzanne Crouch, previously a Congresswoman, who’s held the elected position since 2014. She’s also our Republican candidate for Lieutenant Governor in the upcoming election.

She generously explained the role of the Auditor’s office in Indiana government, in that they’re in charge of paying the bills and balancing the government’s accounts and big checkbook. If you were hoping for tax form audit fun, that’s another department.

Later in the afternoon, a program was held to salute the Indiana Bicentennial program itself, the volunteers and dealmakers who made it a reality, and the citizens who supported its ongoing efforts and appearances in the news and throughout social media. I thought it would be merely a parade of bureaucrats and strangers thanking other strangers. Mostly it was, until a well-known surprise speaker came in for several minutes to celebrate all things Indiana with us.

MCC’s American readers should be familiar with Indiana Governor Mike Pence. His speech was 100% nonpartisan, left politics at the front steps, and aligned with our own personal beliefs that, at the end of the day, Indiana does not suck.

The grand finale to our day was the long-awaited Indiana Torch Relay arrival. We’ll have more about that in a separate entry, but here’s a few preview photos from that ceremony. 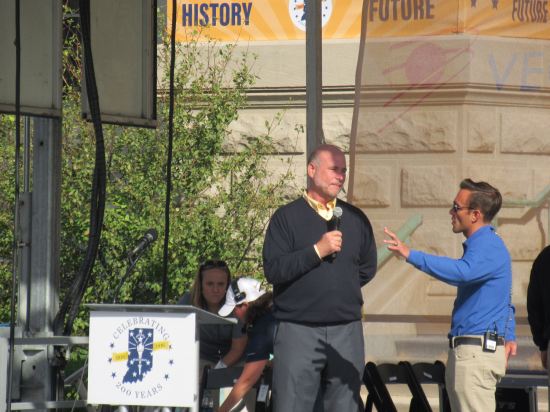 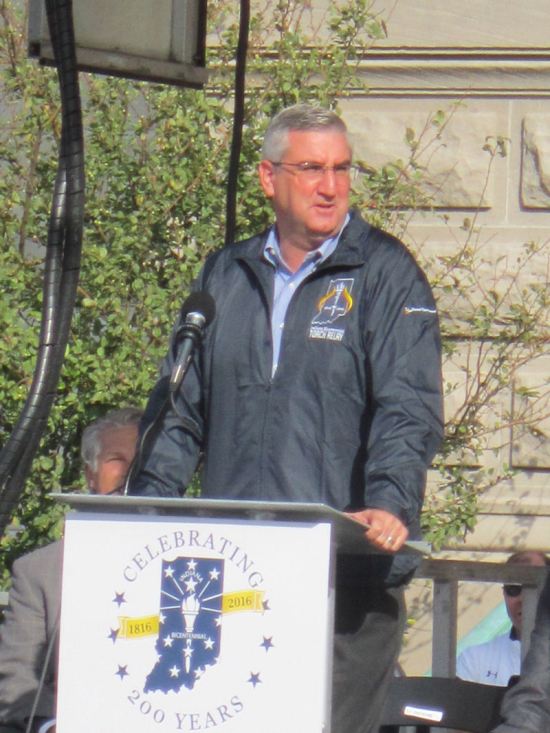 Eric Holcomb’s involvement in the Indiana Bicentennial project predates his appointment as Lieutenant Governor back in March 2016. He’s now hoping to replace Pence as Indiana’s new governor come this Election Day, but is running several thousand points behind Democrat candidate John Gregg. But he helped make the Bicentennial happen, and for the moment that’s what matters to us here.

To be continued! Other chapters in this six-part MCC miniseries: