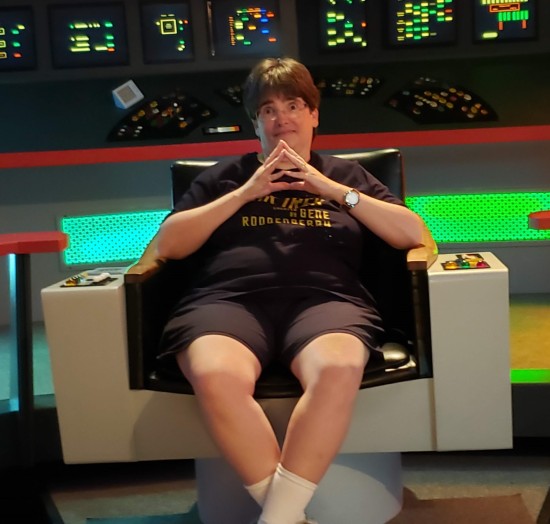 Captain Anne has the bridge.

Sure, Vermont was our target destination, but the Star Trek Original Series Set Tour might’ve been the stop on our itinerary that we were most excited to see. The town of Ticonderoga seemed an odd location choice, as opposed to a large city or squarely in California, land of ten thousand entertainment tourist attractions. But inside those doors and on those resurrected sets, all questions about the outside become irrelevant while you’re exploring this full-scale, familiar TV world.

Of course we couldn’t contain all that space goodness to a single chapter.

END_OF_DOCUMENT_TOKEN_TO_BE_REPLACED

Scotty, two to beam down!

MCC’s amazing colossal Star Trek year continues! So far in 2022 we’ve attended Star Trek: Mission Chicago (where we met cast members from multiple series) as well as two other conventions with Trek stars (another Chicago show, plus one here in Indy); we’ve shared and overshared our impressions of Picard; loved both Lower Decks and Strange New Worlds without writing about them; read a few Trek-related books, some of which I’ve discussed as well as others I’ll eventually cover when I get back to writing about my reading; and checked out the Captain Janeway birthplace statue in Bloomington, IN. After taking several years off from the universe Gene Roddenberry built, we’ve fallen back into it hard.

We even worked a heaping helping of Trek into this year’s vacation. It wouldn’t be the first time we’ve detoured for Trek’s sake (cf. that one time in 2014 when a traveling Trek exhibition stopped at the Mall of America), but some extra mileage was necessary to reach this one. One does not merely swerve off-road on an impulse for this particular spectacle.

END_OF_DOCUMENT_TOKEN_TO_BE_REPLACED

I was in high school when The Sandman #1 hit comic shop shelves in the fall of 1988. Springing forth from the mind of Neil Gaiman, whom I chiefly knew from Miracleman and Black Orchid, it was unlike anything I’d read before in comics or other media, and was a must-buy over the next seven years — through its transition to DC Comics’ subsequently inaugurated Vertigo line, in its rise to alt-culture superstardom, and even during some of the least favorite parts of my life. The Sandman lasted longer in my life than I lasted in college. I still have all 75 issues, the special with Orpheus’ story, the two Death miniseries, the lovely hardcover edition of my favorite arc (Season of Mists), and some (not all) of the other ensuing spinoffs. (Of most recent vintage, I loved the Gaiman-approved two-issue crossover with Locke and Key, which may have meant more to fans of the latter but contained key prequel scenes to the world of Dream, including front row seats to the fall of Lucifer.)

I rarely allow myself high expectations for anything anymore, but The Sandman left a deep enough mark on my psyche that I insisted the all-new Netflix adaptation — closely supervised by Gaiman — simply had to be The Greatest Netflix Show of All Time. Nothing less would do. The jury’s out on that for now, but after having watched all ten episodes within a 21-hour span (with wasteful intermissions for sleep and life, not necessarily in that order), I can enthusiastically say for now it’ll do. It’ll very much do.

END_OF_DOCUMENT_TOKEN_TO_BE_REPLACED

Today we were saddened to hear of the passing of Nichelle Nichols, a.k.a. Lieutenant Nyota Uhura from Star Trek, life-changing inspiration and role model of millions. Millions of actors, creators, celebrities, fans, and news sites are online to explain who she is or what she meant to so, so many. For me as a youngster who caught the OG Enterprise crew in reruns, she was an integral part of a stellar interstellar ensemble who showed us, despite innumerable obstacles in their path, that theirs was a potential future for humankind, in which everyone works, lives, and succeeds side-by-side in forging new paths together.

END_OF_DOCUMENT_TOKEN_TO_BE_REPLACED

“See you out there.”

EDITOR’S NOTE: My wife Anne has contributed to our past ten years’ entries in a variety of ways — photography, ideas, punchlines, caper-partnering, next-day proofreading, encouraging, fact-checking, nitpicking, and so on. She otherwise generally prefers to enjoy the site as a reader rather than as a separately credited blogger. This entry is a special case: she’s MCC’s very first Guest Blogger, though “guest” feels a tad off the mark. Except for light editing and two jokes, these paragraphs are all hers.

Her essay is aimed at fellow Star Trek viewers, whether they love or loathe Patrick Stewart’s further adventures so far, and presumes familiarity with common fan abbreviations for the various shows. And, relevant fun trivia noted previously on Midlife Crisis Crossover, Q is one of her Top 3 Favorite Fictional Characters of All Time. Suffice it to say the season finale struck a nerve. This entry is a rumination attempting to make sense of a tale that frequently didn’t make sense and in some ways still doesn’t. It’s a contemplation. It’s a eulogy. It’s a catharsis.

(Courtesy spoiler warning if you haven’t seen season 2 in general or the finale in particular.)

END_OF_DOCUMENT_TOKEN_TO_BE_REPLACED

If they were a couple we could call them “Q-Card”.

My wife Anne has been a Star Trek fan since at least high school, which is how long I’ve known her. I’ve tagged alongside her for the past few decades and watched a few hundred episodes myself. I’ve never 100% caught up to her but have seen Deep Space Nine in its entirety and can confirm it reigns above all. We attended multiple local Trek conventions and bought the occasional toys, comics, and other merchandise, but up until six months ago we had no investment in the new Trek works on Paramount+ (formerly CBS All Access) because we weren’t in the mood to collect ALL the streaming services. And to us, CBS All Access at launch sounded like a non-starter. We regretted the Trek universe leaving us behind, but our longtime favorite geek universes have broken our hearts before. We planned to cope and move on.

END_OF_DOCUMENT_TOKEN_TO_BE_REPLACED 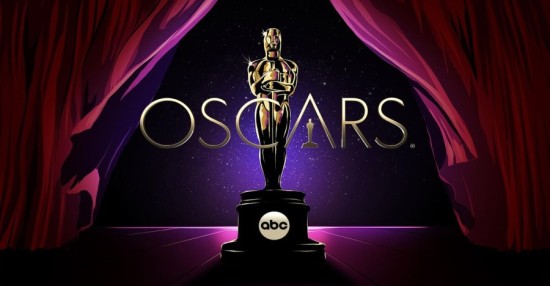 Purple, the color of bruises.

If you count the one-hour unaired portion of the 94th Academy Awards that began at 7 p.m. EDT, this year’s return to the Dolby Theatre technically came in at a staggering 272 minutes when the usual legal disclaimers rolled at 11:42 p.m., beating the year A Beautiful Mind won by nine minutes. We already knew going into this evening that it couldn’t possibly beat the Shortest Oscars Ever record of 100 minutes, achieved in 1959 when an angry Jerry Lewis gave all the Oscars to The Geisha Boy, read his 90-minute doctoral thesis about muscular dystrophy, and called it a night. Just the same, these Oscars were a lot, even before the cruel insult and the on-stage assault.

END_OF_DOCUMENT_TOKEN_TO_BE_REPLACED

Vanessa Hudgens and Andrew Garfield in Lin-Manuel Miranda’s tick, tick…BOOM! on Netflix. To those who swear Garfield’s best performance of 2021 was in No Way Home, I am BEGGING you to watch a second movie.

It’s that time again! Longtime MCC readers know this time of year is my annual Oscar Quest, during which I venture out to see all Academy Award nominees for Best Picture, regardless of whether I think I’ll like them or not, whether their politics and beliefs agree with mine or not, whether they’re good or bad for me, and whether or not my friends and family have ever heard of them. I’ve watched every Best Picture winner ever (some more closely than others) and as of this writing I’ve seen every Best Picture nominee released since 1987 (some in better-quality formats than others). Nobody I know cares, but it’s been my thing for years.

Thanks to pandemic restlessness and our current streaming media bonanza, starting last year I expanded the boundaries of Oscar Quest to see how many nominees I could watch in any category whatsoever, period. This is equally unimpressive to everyone I know, but now it’s like a game for me, and a far livelier one than solitaire.

END_OF_DOCUMENT_TOKEN_TO_BE_REPLACED

Who among us hasn’t felt as stressed out as Laurie Strode lately?

Previously on Midlife Crisis Crossover: in 2021 I made 22 trips to the theater to see films made that same year. The year before, the pandemic thoroughly quashed the moviegoing experience and shrank my annual year-in-review entry to a mere four entrants, which barely counted as a “list” and convinced me to start a new, separate annual MCC tradition: a ranking of all the brand new films I saw on comfy, convenient home video in their year of release.

END_OF_DOCUMENT_TOKEN_TO_BE_REPLACED

At least not all the awards went to white folks this year, so there’s that.

At a cozy and snappy 217 minutes (two minutes longer than last year’s), the 93rd Academy Awards went hostless for its third straight year in its very special pandemic edition co-produced by director Steven Soderbergh. A maximum of 170 guests were allowed into an auditorium furnished like a company Christmas party inside L.A.’s Union Station, while all the European nominees who cared to participate holed up in a rented UK theater, and someone let Bryan Cranston have the Kodak Theater all to himself. In pre-show interviews Soderbergh insisted strict COVID-19 protocols were in place, same as they’re using for current Hollywood productions, and AMPAS president David Rubin swore from the red carpet that everyone was “100% safe”. Here’s hoping all the scaled-down glitz and glamour wasn’t for the sake of an awkward super-spreader event.

(Occasionally a mask could be seen in the crowd. At one point the camera lingered on a seated, masked Frances McDormand glowering in repose. She was among the few celebs I spotted taking measures for the public to see. In that one moment, at least.)