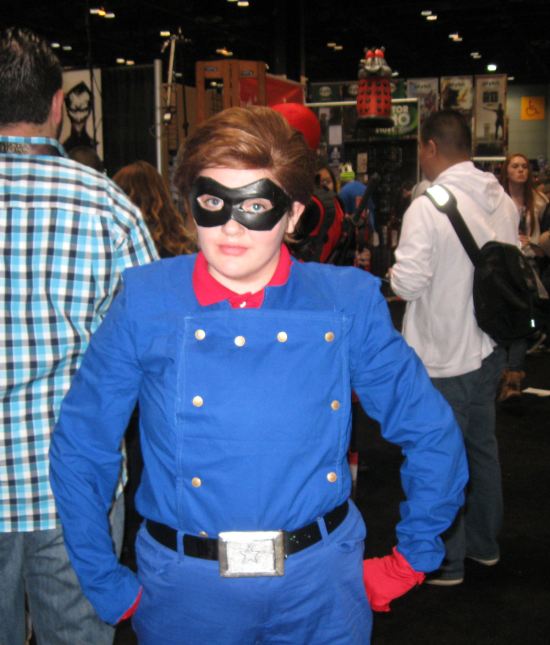 As of last weekend my wife and I officially finished our 2014 convention schedule. We attended seven cons this year, our new all-time record. In addition to our annual Chicago trips, Indianapolis itself became the epicenter of a Midwest convention explosion and offered us more opportunities than ever to meet comics creators, greet actors old and young, buy cool stuff, and see lovingly crafted costumes drawn from across several decades and all available media. Some cons fared better than others; some will return in 2015 with lessons learned and bigger plans than ever; and at least one will be a mere footnote in local geek history. At least two more newcomers, Wizard World Indianapolis and Culture Shock, are also inviting themselves to the dance for 2015. Somehow our convention bubble is bursting and expanding at the same time.

We here at Midlife Crisis Crossover would like to thank the crew and guests of all the cons we attended this year, throw a shout-out to those people we met whose names we didn’t catch (and vice versa), and salute the scores of cosplayers we saw, photographed, and appreciated for their presence, their fandom, their inspired creativity, and their fortitude in the face of the physical rigors, the construction costs, the naysayers, the gatekeepers, and the gawkers like us who stop you every three feet because either (a) we don’t get you but we love what you did, or (b) we do get you and your brilliant character choice just made our day.

In particular, this entry goes out to fifteen of the standouts we captured from among that vast, maddeningly talented crowd. Thanks for helping make our 2014 an unprecedented, wondrous, far-out year of geekiness.

And now, on with the countdown! 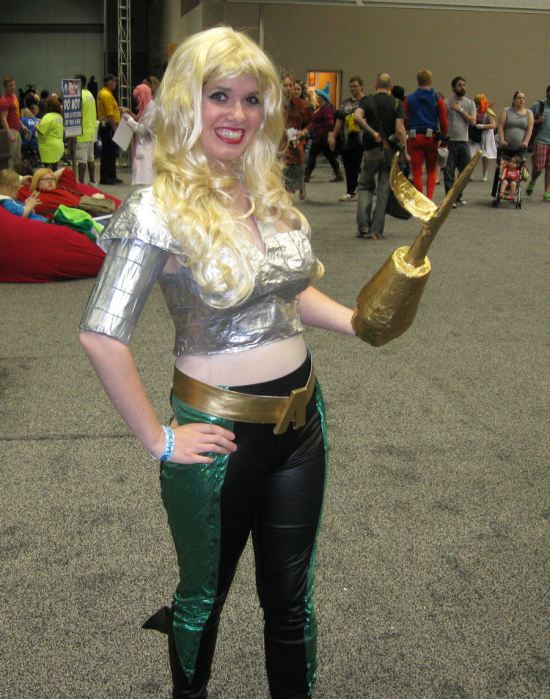 The grim-‘n’-gritty, harpoon-handed version of the Atlantean ruler may have been deleted from DC’s history books, but some of us appreciated that era when we didn’t have to look at that orange fish-skin shirt for a while.

Gender-swapping is such a not-new concept in the cosplay arena that I’ve stopped using the term in more recent entries. This one, I think, discovered a new level of bravery. I had to burrow through several layers of denial before I could accept exactly who this was.

How to Train Your Dragon is my favorite DreamWorks Animated film to date, so I’m pretty tickled whenever someone brings more attention to it. 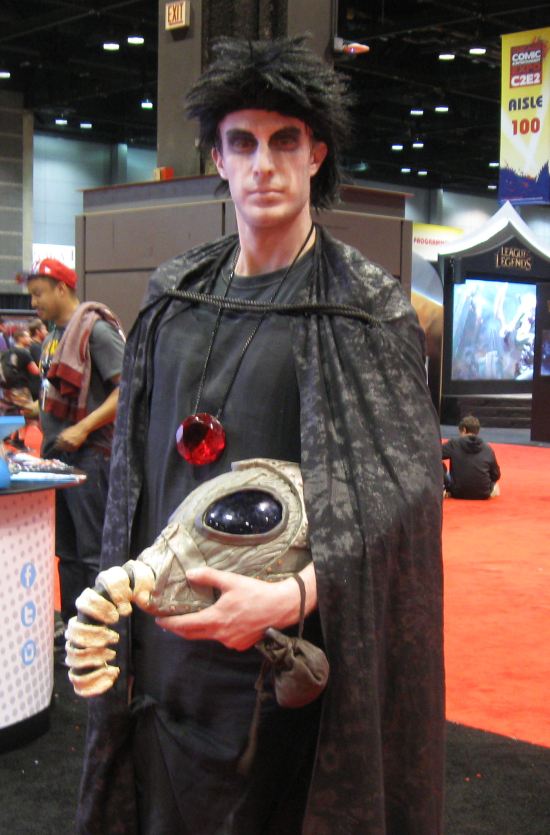 The star of Neil Gaiman’s Sandman walked among us in the waking world, and he even brought the ruby, the helmet, and the pouch of sand. Unique accessories make the man.

Our local chapter of the 501st Legion ensures that no convention passes through town without Stormtroopers on duty, but Jedi have been a dwindling breed. (We’ll see an impact from The Force Awakens on the future cosplay scene, I’m sure.) The fine robes of Luminara Unduli’s padawan are a rare yet welcome choice for Star Wars representation.

As seen on the old Batman TV show! Yes, this Joker variant really was from an episode. If you think the Clown Prince of Crime looks odd with a surfboard, you should’ve seen Adam West trying to hang ten.

Indy Pop Con had the best possible setup for fans who like taking pics of cosplayers: the long path to the stage wound through the audience like a series of connected runways, giving this fabulously dressed Japanese pop personality the perfect opportunity to strike well-timed poses up close instead of through pixelated zooming.

8. FrankenBerry and a 17-foot dragon

Two of this year’s largest costumes met at C2E2 and practically crowded away their opponents. We also caught FrankenBerry making encore appearances at Indy Pop Con and Starbase Indy, working the convention circuit and putting that slacker Count Chocula to shame.

Not a convention photo! Every year for Free Comic Book Day in May, Indianapolis’ own Downtown Comics North has several cosplayers on hand to dazzle and/or wrangle the crowd while everyone waits their turn for freebies. Hawkeye’s suit here uses Jeremy Renner’s template, but adds those little touches like the hair and the sunglasses that remind me more of the comics than Renner’s just-okay rendition.

Meet key figures from two fields woefully underrepresented at cons: history and advertising! My wife the history buff recognized MacArthur before I did, but I recognized Rosie before she did. Funny how that worked out.

Rather than populate the entire list with Final Fantasy characters, which was pretty tempting, I limited myself to the one that surprised me the most. It’s like ye olde FFVII emerged from my TV in all its glorious polygonal awkwardness.

Prince meets pulverizer in this super-musical mash-up, whose Gen Con stage presentation naturally included a few reworked lyrics from the song. I still owe him an apology for delaying him several extra seconds while I struggled with clicking the button and laughing myself silly at the same time.

Jessie! James!
Team Rocket, blast off at the speed of light!
Surrender now, or prepare to fight!
And me, ASH! That’s…wait, that’s not right.

…those priceless expressions win the photo. 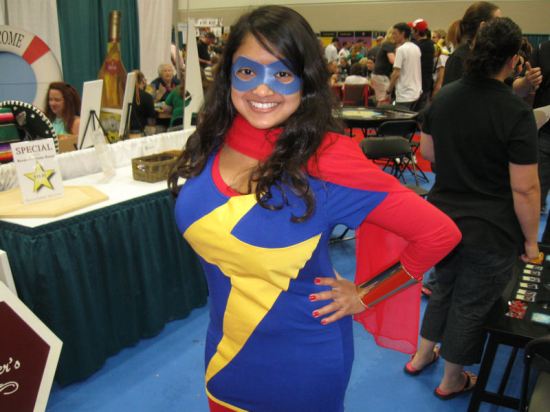 2014 brought us the redoubtable Kamala Khan, Marvel’s newest sensation and star of one of the year’s best series. I didn’t expect to meet her in person this soon, and yet there she was. 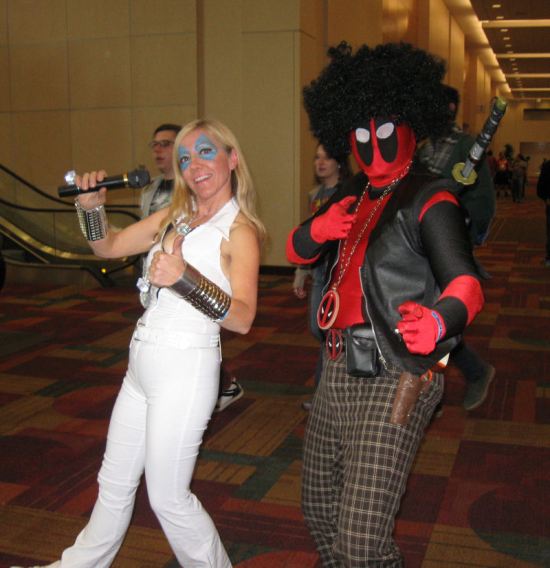 You probably know Deadpool. You’ve probably seen other Deadpool cosplay variants. You may not know Dazzler, who was Marvel’s attempt at cashing in on the 1970s disco craze. It might’ve worked if her first appearance hadn’t been in 1980, pretty much when disco was dead and in the hands of its pallbearers. Here, Dazzler and Disco Deadpool brought the moves, the swagger, the fascinatin’ rhythm, and their own groovy boom box full of jams, and they got down.

For the casually curious or the cosplay aficionado, assembled below are links to all of MCC’s cosplay entries for 2014, comprising seven conventions and one special event. Enjoy!

…and for those of you who follow current events in the world of comics and/or conventions and are wondering if this entry was at all inspired by the big, lamentable Pat Broderick ruckus…well, yes. Yes, this is an intentional show of support for the side we’ve chosen. My wife and I wrote to excess about all of this previously, the last time this conversation happened, and at the moment we’re out of new things to say. The short version for newcomers: if you’re an artist who’s struggling to turn a profit at comics conventions, targeting sartorially exuberant fans as your scapegoat will not solve your most crippling issues.