This weekend the inaugural Indy PopCon will paint our fair downtown red with a healthy mix of comics, gaming, actors, LARPing, and various other manifestations of pop and geek culture in general. My wife and I will be attending Saturday only, partly as a budgetary measure (by which I mean, the longer I’m there, the less money we’ll have for vacation in July, or for utilities) and partly because we’re still feeling a bit burnt after last March’s the inaugural Indiana Comic Con went, um, not according to plan.

We’re pleased to report we worried for nothing. Today was one of the smoothest convention experiences we’ve had in ages. All the high-profile guests showed up. We never waited in a line with more than ten people ahead of us. The exhibit hall aisles were spacious and never in danger of fire marshall intervention. The comics dealers had some sweet bargains. And those in charge of the costume contest came up with a brilliant new strategy that allowed the crowd to get much better looks at the contestants. Perhaps everything went well because 100,000 fans didn’t converge on the scene at the same time, but it’s clear that a lot of people put a lot of thought into this shindig.

Over the next entries, we’ll be sharing our photos and anecdotes from the experience. I don’t know how many entries yet because it’s late and I’m exhausted and the power-level indicator on my brain went from green to yellow hours ago. We’ll figure that part out later. Caveats for first-time visitors to Midlife Crisis Crossover:

1. My wife and I are not professional photographers, as is obvious if some pics are viewed through any gadget larger than an amulet. These were taken as best as possible with the intent to share with fellow fans out of a sincere appreciation for the works inspired by the heroes, hobbies, artistic expressions, and/or intellectual properties that brought us geeks together under one vaulted roof for the weekend. We all do what we can with the tools and circumstances at hand.

2. It’s impossible for any human or organization to capture every costume on hand. Although we captured all of this year’s winners to one degree or another, we didn’t catch every costumed entity on the premises.

3. Sincere apologies to anyone we’ll miss due to being absent on Friday and Sunday.

4. Corrections and comments are always welcome, especially when I beg for them with certain shots. You, the Viewers at Home, will have opportunities to step up and name some anime and/or fantasy characters we old fogies didn’t recognize. I like learning new things, especially when I’m trying to write about characters and series that are beyond my particular geek foci.

Part One: winners of the first annual Indy PopCon 2014 Costume Contest. Three hundred submissions were winnowed down to 77 finalists, from which were chosen three amateur winners, three professional winners, and one overall Best of Show winner who’ll have the opportunity to represent as the Face of Indy PopCon 2015.

Just to show you I wasn’t kidding above: here’s my favorite of the winners — second place, amateur division. Her Japanese name landed on my ears as “Kohaku Kirin”. If you recognize the character and/or source anime, I’d love to hear from you in the comments below. Feel free to plug your site while you’re here, even.

— UPDATED 6/1/2013: we have identity! The correct name is Kohakuren from the game Kamidori Alchemy Meister. Check the Comments section below for explanation from the cosplayer herself, along with a link to her official page!

(Admittedly, there’s some red-eye that should’ve been edited, but it amplifies the character’s otherworldly nature and it goes with the outfit.)

The most unusual aspect of the Costume Contest: instead of hiding the contestants in the back room and simply shuffling them across the faraway stage, the showrunners set up a system whereby they each followed a preset path all around the seating sections (in the back, along the sides, near all us chumps who didn’t pay for VIP frint-row privileges), paused at each checkpoint for fifteen seconds to three minutes (depending on the speed of the line in front of them), and then moved forward until they passed all checkpoints and faced the judges and the entire crowd onstage. We applaud this creative approach.

Anyway, on with the photos. The Best of Show winner: Smaug! A gender-bent Smaug at that, for those who insist on such modifiers.

Yeah, caught her blinking at the wrong moment. For reference, here’s the detail on the back of her costume as well. The announcer, entertainer Johnny Dellarocca, didn’t provide us with details about characters, works, or the designer’s specific materials and techniques. Regardless, she suitably impressed the five judges — four professional cosplayers plus actor Keahu Kahuanui from MTV’s Teen Wolf. We’re cool with their decision. 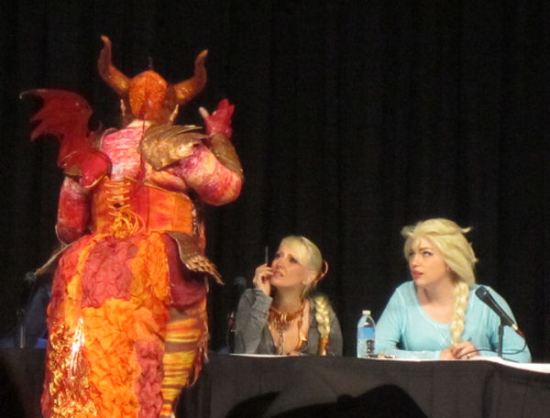 As for the others: third place, amateur division, was a pair of brothers. Behold: Mario from Super Mario Sunshine! His working Turbo Nozzle squirts water. 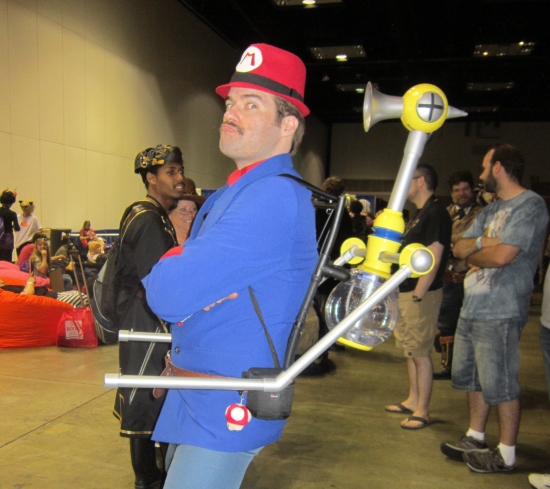 Mario shared the trophy with Luigi, wielding the Poltergust from Luigi’s Mansion. Not in this pic, mind you.

First place, amateur division: the Hound from Game of Thrones. Between him and Smaug, it was a good year for pointy-toothed evildoers.

Third place, professional division: the Witch-King of Angmar from Lord of the Rings, whom we met earlier in the exhibit hall.

First place, professional division: Big Sister from Bioshock 2. This costume required a tremendous level of commitment because the helmet narrowed her field of vision to practically a pinpoint and rendered her effectively deaf. A family member (mom? sis?) had to serve as her guide through the crowd and as her interpreter when the judges had questions for her.

And these were just a fraction of the fine talents on display today. To be continued!

Links to the other installments in this very special Midlife Crisis Crossover event are enclosed below. Thanks for visiting!

* Part Two: the Big-Budget Blockbuster Costumes
* Part Three: Costumes from Comics
* Part Four: the Costumes of the Doctor
* Part Five: Gaming and Anime Costumes!
* Part Six: Last Call for Costumes
* Part Seven: the Sylvester McCoy Hour
* Part Eight: What We Did and Who We Met