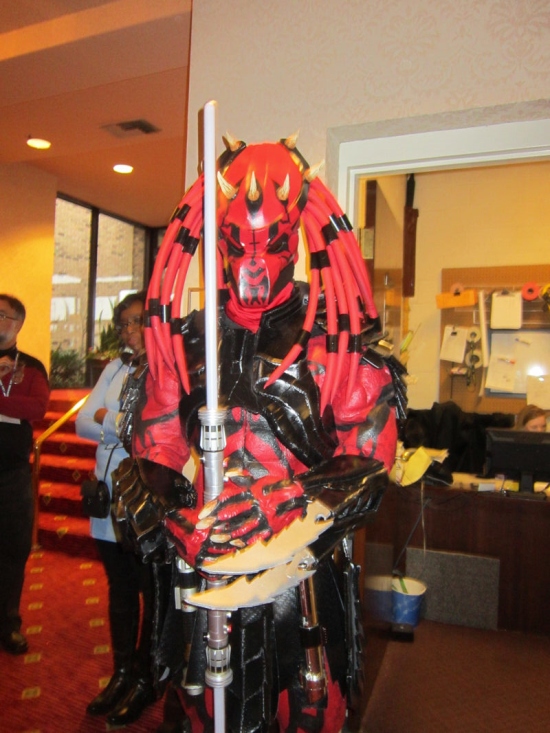 On this weekend in 1988, the inaugural Starbase Indy introduced Indianapolis to the amazing world of Star Trek conventions, though it later expanded its dominion into other sci-fi TV shows. Setting aside several years skipped during turbulent times, SBI is one of the most persistent fan-run geek conventions in Indianapolis. It’s a fraction the size of Gen Con, Wizard World, and our other regular cons, but we’ve attended SBI more times than we have any other con. The smaller scale allows for shorter lines and less suffocating crowds, while still attracting talented guests from shows and works we know rather well (and some we don’t). For local geeks such as my wife and myself, it’s a regular highlight of our average Thanksgiving weekend, more fun and with far fewer confirmed fatalities than Black Friday.

2014 marks SBI’s nineteenth iteration, and a more diversified guest list not only from Star Trek, but also from the worlds of Stargate and Battlestar Galactica. Before we cover the guest list, though: mandatory costume photos!

Master Chief and Ghost Rider. Halo and Hell, so to speak.

Stars of the upcoming reboot The Ghost and Mr. Chief.

Possibly a Mandalorian with shoulder cannons taken from the corpse of a defeated Predator.

A Klingon, a Cardassian, and an Orion walk into a con…

…and killed the stupid jester before he could think of a punchline. The End.

Who’s the good cop and who’s the bad cop? The answer will surprise you!

…and that’s just about all the usable cosplay pics we took. We were only on the premises Friday long enough to grab our registration packets and attend the opening ceremonies. We were around for six hours on Saturday, but foot traffic was slow the first couple hours. Business seemed to boom later in the day, when we saw many, many fans in Starfleet uniforms from various series and even the movies. In 2014 we attended six other conventions, and I feel confident enough to guess for the record that Starbase Indy attracted more Trek-uniform cosplayers than those other six cons combined. That’s encouraging to see for an IP that’s been around nearly fifty years, but it’s tough to decide which ones ought to be photographed.

In between photos and actor Q&As, we found a few other activities at our disposal. The dealers’ room was its usual size, but had a few new vendors I don’t recall seeing before. We picked up some sustenance to take home — Japanese snacks for my son, Trek-themed doggie treats for our Lucky, and one Blu-ray and a DVD set for me. Autographs for my wife would come later.

Maybe the shows would’ve lasted even longer if they’d called it Surfgate.

Kids and crafty adults had the chance to build their own Tribbles and compete for prizes. The participants treated the rest of us to a Tribble parade around the show floor, led by Five Year Mission guitarist Patrick O’Connor.

For attendees who grow tired, hungry, thirsty, or cranky, the Dana Dougan Con Suite offers free refreshments, seats for resting a spell, meals at certain times throughout the day, and a stack of puzzles for the truly restless. During a morning lull when nothing on the schedule piqued our interests, my wife and I wiled away 20-30 minutes collaborating on this veritable masterpiece, which everyone has to like because it says “MARVEL” on it.

Since we’re on the subject of random inanimate objects, please enjoy this feisty B.A. Baracus action figure, who stood guard over one autograph table while its owner was busy elsewhere. Take heed of his words of wisdom, FOOL.

Mr. T had the time of his life, and he’s never felt like this before…