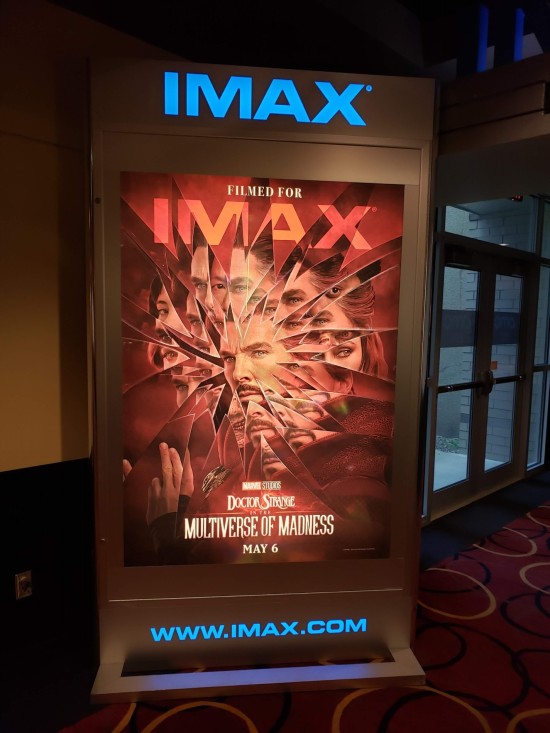 We don’t always pay extra for Marvel movie upgrades, but this time…eh, why not.

A coworker of mine was invited to see Doctor Strange in the Multiverse of Madness on opening weekend despite the fact that she’d never watched a single Marvel product in her life. While I chuckled for a few minutes and mentally judged the invitee for his selfish chutzpah, another coworker generally on the same pop-culture page as me graciously tried to recap both the first Doctor Strange and Spider-Man: No Way Home in hopes that it might give her the slightest help before being dragged into the 28th film in the Marvel Cinematic Universe. It’s kind to show someone how to dog-paddle at least a little before they’re shoved into the deep end of the pool by some dude eagerly looking forward to giving her swimming lessons while she’s drowning. Oh, the gleeful countdown he probably kept in his head for days until that heroic moment when he could point at Benedict Cumberbatch onscreen and proudly, loudly whisper to her, “That’s Doctor Strange!”

Meanwhile, I’m unhelpfully daydreaming how this exchange might’ve been twice as entertaining, but only half as helpful, if at all helpful, if coworker #2 had delivered the recap in the style of Ant-Man’s pal Luis. I am arguably an enabler of the problem here.

END_OF_DOCUMENT_TOKEN_TO_BE_REPLACED 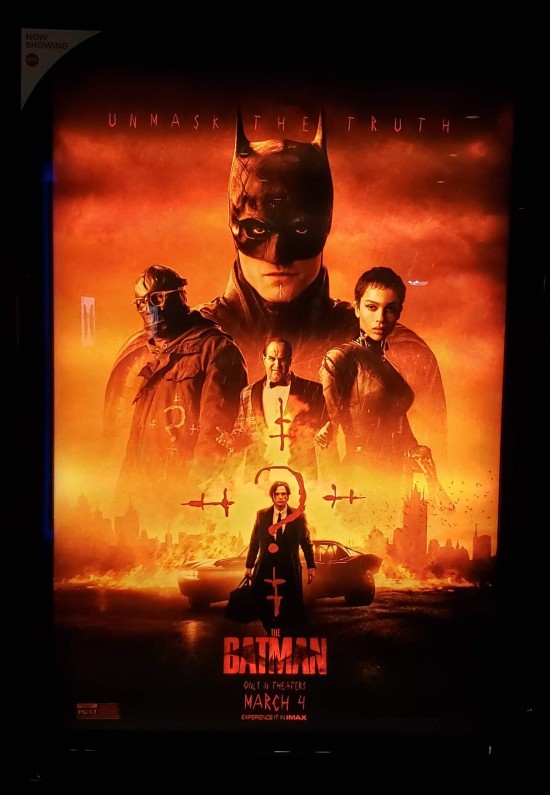 Poster for the box office smash I Am Vengeance (Orange).

It’s been two months since the last new superhero film hit theaters, and six months since the last new DC Comics film. Between Oscar season and unwanted studio castoffs, it’s been such a drought for viewers who’ll only leave the comfort of their homes for comic-book films. At last The Batman is here to save them. Not that I’m complaining too loudly about this cinematic rescuer, as it’s one of the Dark Knight’s best films in over a decade, maybe longer.

END_OF_DOCUMENT_TOKEN_TO_BE_REPLACED 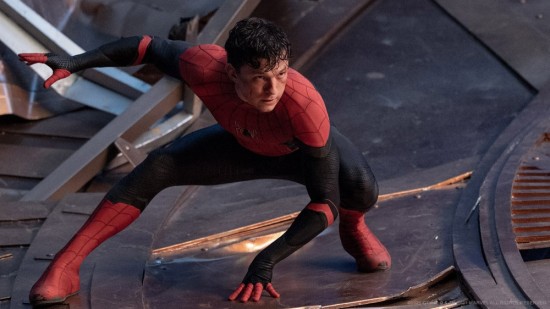 It wouldn’t be a true Spidey film if Peter didn’t unmask for the final battle.

Here’s the Too Long, Won’t Read version: despite some wonderful interplay among the main cast and the special guests at the heart of the film (and one beautifully meta performance in particular), Spider-Man: No Way Home is my least favorite Marvel Cinematic Universe film since Thor: The Dark World. I’m in the minority on this, but no other 2021 film has aggravated me as much as this box-office leviathan did.

Hope that helps? You’re now free to go. Thanks for stopping by. I do understand. I just need to get the following 5000 words out of my system. Imagine it’s Martin Scorsese’s rapid voice so it’ll move faster.

Still here? Cool, but fair warning: it’s been a long time since I front-loaded a movie entry with a courtesy spoiler alert. There’s no way I can adequately express my reactions without moving beyond the trailer-approved plot points and into its numerous surprises, some of which were foretold on various geek clickbait sites and some of which I predicted from the trailers. Really, the courtesy spoiler alert is for real, anything goes. You might find plenty of reasons for irritation with me, but by venturing beyond the courtesy spoiler alert guard post you hereby forfeit the right to count “AAAHH! SPOILERS!” among them.

Once again, for those just joining us: courtesy spoiler alert. Thank you.

END_OF_DOCUMENT_TOKEN_TO_BE_REPLACED 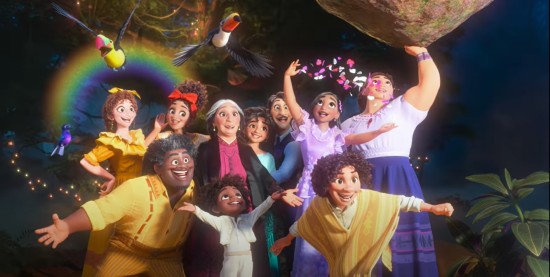 Not many family photos could double as a cover for their own superhero comic.

Once upon a time, new Disney and Pixar animated films were an automatic “see in theaters” category for our family. (Well, generally speaking. Maybe someday I’ll get around to The Good Dinosaur.) Works from other animation studios were not so guaranteed and were judged on a case-by-case basis. Our last animated theatrical experience was Pixar’s Onward, which was back in March 2020 and just-okay. For non-Disney fare (not counting shorts) I’d have to go clear back to the third How to Train Your Dragon in 2019, which was likewise just-okay.

Then along came a pandemic that interrupted our traditions and our rhythms. Some studios kept releasing new cartoons anyway, albeit on a protracted schedule. We ignored all of them, even after getting our shots, because of inertia. I recently caught up with a few 2021 releases on streaming services, but they haven’t been a top priority. (Maybe someday I’ll get around to Raya and the Last Dragon.) Amidst this current holiday season my son and I noticed the oversight and revived our tradition at last with an outing for Disney’s Encanto — apropos of the occasion, a film about family, tradition, and ruination that we think comes from without when in fact the disruption is coming from inside the house.

END_OF_DOCUMENT_TOKEN_TO_BE_REPLACED

“Kneel before your new god, the great and powerful d6!”

Among the tenets of staunch dogma handed down by elder comic book fans is: Jack “King” Kirby was a saint and every page he breathed upon was perfection incarnate. To find fault in anything Kirby ever did is to sound like an edgelord poser and betray Comics. Kirby indisputably drew legendary comics and was one of the most significant co-inventors of one of our greatest American corporate mythologies, but his heyday largely ended a few years before my time. His pages could be wondrous panoplies of dynamic, majestic, blockbuster imagery, all the more mind-blowing if you can see the original, full-size art in person.

Then there were the other components, from the peculiar scripting in his post-1970 Stan-Lee-less bombastic productions to his predilection for pun-filled character names that could sound like their own MAD Magazine parodies. Multiple short samples of his mid-’70s Eternals, arguably a rehash of his DC “Fourth World” work with new nametags, left me cold. Later revivals by the likes of Walt Simonson and Neil Gaiman — yes, that Neil Gaiman — likewise did nothing for me. I didn’t even finish reading Gaiman’s version. I tried. Alas, I’m not proud to be a longtime heretic barred from the Eternal Orthodox Church of King Kirby the Konsummate Kreator.

END_OF_DOCUMENT_TOKEN_TO_BE_REPLACED

Usually whenever an entry dawdles in my head unwritten for such a ludicrous time span, I don’t preface its procrastinated release with hyperbole to the effect of “It’s an entry five months in the making!” as if I’ve been toiling away on it day and night, tinkering with every last clause and syllable with a mental toolkit until I achieved self-expressive perfection. Sometimes that is my writing process in my mind, till I unveil the end results and then spot three typos and six flat punchlines. That isn’t the excuse here.

END_OF_DOCUMENT_TOKEN_TO_BE_REPLACED 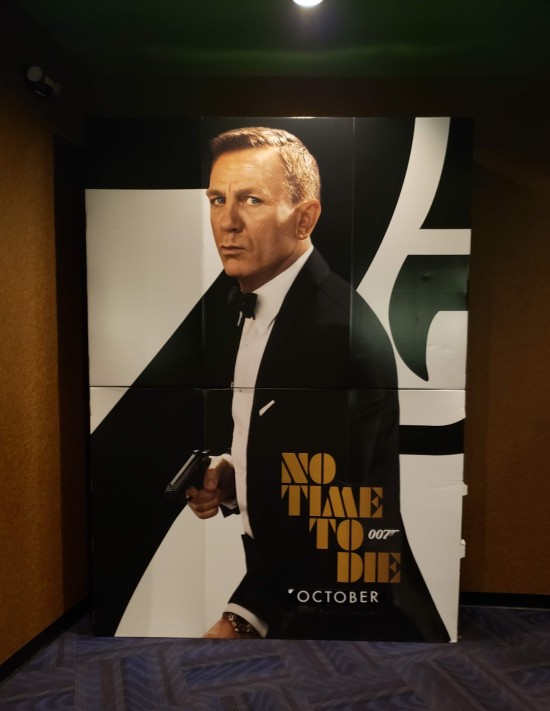 The Weekend Guy! Now in theaters!

The pandemic isn’t over, but the long waits for the films it delayed are ending, one by one. Seventeen years after completion and on the anniversary of its fiftieth trailer, Daniel Craig bids farewell to those lovely James Bond paychecks (though not the residuals) as his fifth and final outing No Time to Die is now permitted in American theaters. Exhibitors are next looking forward to the day they can stop showing the same trailers over and over and over for the last major COVID holdout remaining, The King’s Man. This interminable era has not been a fruitful one for British action spies or Ralph Fiennes.

END_OF_DOCUMENT_TOKEN_TO_BE_REPLACED 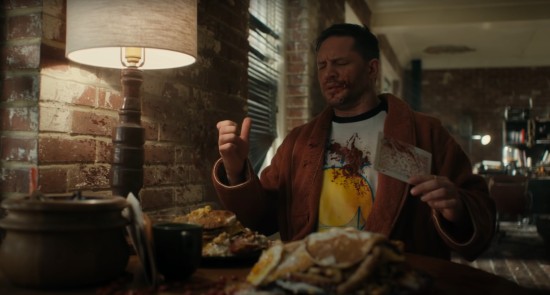 A lot of Tom Hardy fans were looking forward to the new film where he plays a thickly accented schlub possessed of too much power who can’t deal with its consequences and, after leaving too much death in his wake, hits some major obstacles and faces the possibility of living out the rest of his life in powerless mediocrity. That was 2020, and we all agreed never to speak of Capone again. One year later Venom: Let There Be Carnage reminds us why Hardy rules, sometimes despite his surroundings.

END_OF_DOCUMENT_TOKEN_TO_BE_REPLACED

Unquestionably the bloodiest film I’ve ever seen on an IMAX screen, or likely ever will see on one.

Sure, I could’ve been a better blogger and rushed to type my thoughts after being flabbergasted (at IMAX size, no less) by James Gunn’s The Suicide Squad while it was still cool on opening weekend and before everyone decided it was “over” because it didn’t make $400 million at the box office, as if the HBO Max day-and-date release was never a mitigating factor. What else is there to say about a film so nakedly audacious about its primary objectives, so cocky about its body count in all the trailers and interviews, and so thorough in exceeding its dark-humored, extreme expectations? Besides adding that, yes, I too said “wow” and “YUCK” more times than I could count?

END_OF_DOCUMENT_TOKEN_TO_BE_REPLACED 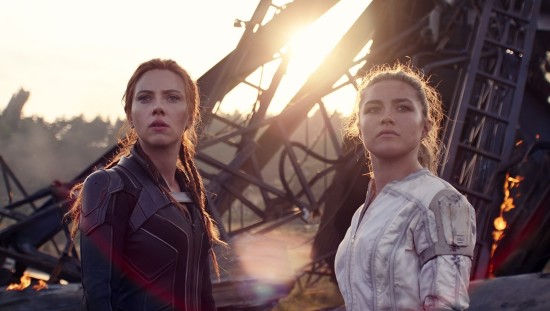 Never, ever mess with war Widows.

Nearly a decade in the making and fourteen months in the releasing, the next chapter in the Marvel Cinematic Universe is here at long last, two years after Spider-Man: Far From Home capped off Phase III in theaters. Fans had to content themselves with Marvel’s new above-average TV fare on Disney+ (or, I guess, some comics) until the world was ready for Black Widow…or at least a lot of the world. Calling them “most of the world” might be an overstatement considering the pandemic has not yet been called off in numerous countries and states. Alternatively, Disney+ subscribers who can’t wait for the home video release in October can cough up thirty bucks and slightly expand that virtual library of above-average TV fare.