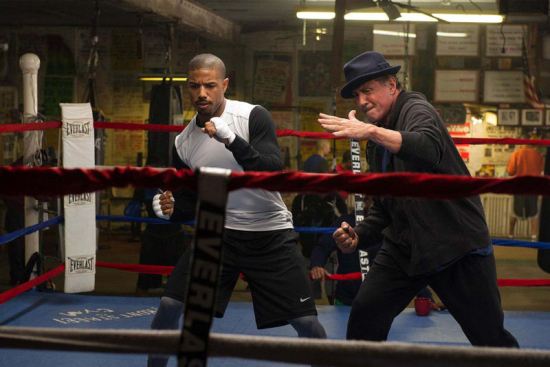 You wanna climb to the top, be ready to do the footwork.

It was probably unfair of me to assume Creed would be one of my favorite films of 2015 before I walked into the theater. Previously in the tragic Fruitvale Station, director Ryan Coogler and star Michael B. Jordan together made my favorite film of 2013. A year earlier, Jordan costarred in Chronicle, a left-field surprise that became my no-contest favorite of 2012. Prior to that, he was in season one of The Wire and thereby granted a lifetime pass for any future catastrophes beyond his control.

On the other hand, I’d only seen three of the six Rocky films — the first one as part of a successful ’90s mission to watch every Best Picture Oscar winner ever; Rocky III at the drive-in, where a furious, pre-laughingstock Mr. T frightened 10-year-old me almost to tears; and the shamelessly jingoistic yet totally engrossing Rocky IV, the only time in my life I’ve ever seen dudes in a theater jumping out of their seats and cheering and fist-pumping at all-American awesomeness overload. Yes, really. I’ve never felt the urge to keep up with the Italian Stallion since then, or to backtrack for the second one.

So in fairness, I had to allow that Creed could’ve gone either way.

END_OF_DOCUMENT_TOKEN_TO_BE_REPLACED

In less than ninety minutes, first-time director Ryan Coogler’s straightforward yet piercing Fruitvale Station introduces you to your new best friend, lets you hang out with him for a while, shows him at his best and worst, and then punches you in the chest while forcing you to watch helplessly as his life is taken right in front of you.