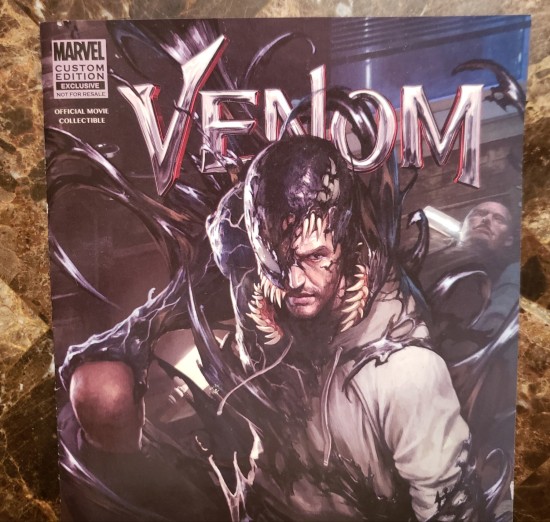 For attending on opening weekend, our local theater gave us a free comic! It’s an adaptation of several random scenes, at least two of which differ from the finished film. Spoilers for anyone who peeks inside before the movie starts.

The character of Venom may not mean quite so much to you if you haven’t been a Marvel Comics collector within the past thirty years, or if you saw Spider-Man 3 and hold a grudge against Topher Grace and Sam Raimi to this day. When first introduced on the printed page, Venom was a team-up of two of Spider-Man’s enemies: Eddie Brock, a bitter workplace rival of Peter Parker’s who got fired and blamed him for it; and Spidey’s former black costume, which was actually an immoral liquid alien parasite that Mr. Fantastic had to help him escape. Venom was the perfect anti-Spider-Man — he all the same powers, the spiffy black design, all of Peter’s memories which the alien had absorbed, and the ability to sneak-attack Spidey without setting off his Spider-Sense. I was 16 at the time and thought Venom was a great idea for a nemesis…one among many nemeses, mind you.

Unfortunately in the ’90s, whenever fans liked any one character a lot, Marvel editors and/or executives would then decree that character must appear in as many comics as possible. Characters such as Wolverine, the Punisher, and Ghost Rider were each given two or three series to their name and/or dropped into other heroes’ titles as special guest stars, constantly and gratuitously. Sometimes it worked and sales spiked with every appearance, until the mid-’90s when their sins finally caught up with them and they knocked off the guest-star oversaturation for a while.

Among those Fan Favorites du Jour in the ’90s was Venom. One problem: he was a most heinous villain with a body count. Homicidal maniacs can be protagonists, but that’s a tough premise to weave into four to six comics per month. Marvel therefore tried reinventing him as an antihero and hoping the other Marvel heroes would forgive and forget, and not try to arrest or kill him four to six time per month. I never loved Venom that much, especially after he began spawning imitative spin-offs like Carnage, Riot, Toxin, Hybrid, Scream, and several more my son could name but I can’t because I never cared. Unless that was all of them. I wouldn’t know. I quit reading the various Spider-titles shortly before all those Venomettes hit the stage and spread the Venom plague.

I’ve run across Venom at random times since then (loved Rick Remender’s version starring Flash Thompson; had no strong feelings about Ultimate Venom) but don’t go out of my way for him. So why did I bother giving a Venom movie any attention? Because I was curious to see if Tom Hardy could sift gold from dross, because I really liked director Ruben Fleischer’s horror-comedy Zombieland, and because my son has been a Venom fan since he was a kid. The occasional father/son outing is a good thing, and we had fun trying to sort out this mess together afterward.

END_OF_DOCUMENT_TOKEN_TO_BE_REPLACED

Probably the closest we’ll ever get to a Bane solo movie.

Before we begin our usual movie discussion format, I present to you a historic milestone here on Midlife Crisis Crossover: our first guest movie reviewer! Reprinted here in its entirety is the full summation of Christopher Nolan’s latest Best Picture nominee Dunkirk as presented to me by my wife Anne, a lifelong World War II student/expert who can deliver literally hours’ worth of speeches on numerous aspects of it without using a single note card. It’s extremely rare for Anne to write or co-write anything here on MCC because she thinks of this site as my thing and prefers to read my creative takes on our experiences. She’s contributed to maybe three or four past entries, tops, but now we can add our Dunkirk entry to her official MCC bibliography.

Take it away, Anne:

“THEY TOOK THE MIRACLE AT DUNKIRK AND MADE IT BORING!“

…ladies and gentlemen, a round of applause for Anne, won’t you?

END_OF_DOCUMENT_TOKEN_TO_BE_REPLACED

With a week to go till the Academy Awards, I’ve seen all eight Best Picture nominees as part of my annual Oscar Quest. I’ve only written about five of them so far and have some catch-up to do. Usually the AMPAS voters love at least one film I’d rather not see, but I’m relieved to report the 2015 lineup gave me the best Oscar Quest I’ve had in over a decade. Early on, I’d gotten the impression that if any nominee would annoy me more than the rest, it would be Alejandro González Iñárritu’s next film stunt The Revenant. I decided to see it anyway and form my own opinions, whether justified or flawed.

END_OF_DOCUMENT_TOKEN_TO_BE_REPLACED 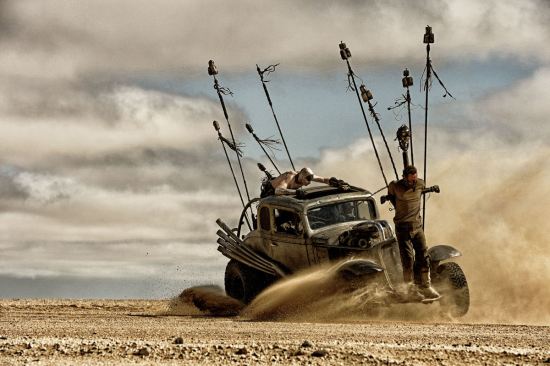 I FINALLY SAW “MAD MAX FURY ROAD”! BECAUSE PEOPLE WOULDN’T SHUT UP ABOUT IT! I SAW IT IN 3-D BECAUSE THAT WAS THE NEXT SHOWING! I THINK THE GLASSES MADE THE EXPLOSIONS LOUDER! AND THEN IT TOOK ME FOUR HOURS TO WIND DOWN! DON’T EVEN ASK ME HOW MANY STUNTS I PULLED ON THE DRIVE HOME! AT LEAST ONE! DON’T TELL MY WIFE!