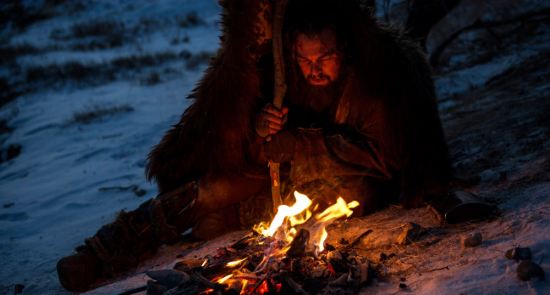 With a week to go till the Academy Awards, I’ve seen all eight Best Picture nominees as part of my annual Oscar Quest. I’ve only written about five of them so far and have some catch-up to do. Usually the AMPAS voters love at least one film I’d rather not see, but I’m relieved to report the 2015 lineup gave me the best Oscar Quest I’ve had in over a decade. Early on, I’d gotten the impression that if any nominee would annoy me more than the rest, it would be Alejandro González Iñárritu’s next film stunt The Revenant. I decided to see it anyway and form my own opinions, whether justified or flawed.

Short version for the unfamiliar: 75-time Oscar-loser Leonardo DiCaprio plays a character somewhat based on real-life fur trapper Hugh Glass, whose company had a rough time contending with competition from Frenchmen and Native Americans vying for a piece of the pelt trade. After a brutal standoff with a protective mama grizzly leaves Glass a mangled wreck, his associates leave him for dead and move along. His chief hater is Fitzgerald (future multiple Oscar winner Tom Hardy), whose immoral pragmatism also leads him to eliminate another inconvenient coworker that stands between him and his payday. Glass miraculously survives his near-transformation into casserole, makes painstaking use of wilderness resources to aid his slow recuperation, and dreams of getting revenge on Fitzgerald in between fugue states inspired by his late Native American wife and their son, which the real Glass lacked.

Hey, look, it’s that one actor!: DiCaprio’s boss is Domhnall Gleeson, the busiest lucky charm in 2015 showbiz. See also Ex Machina, Brooklyn, and Star Wars: The Force Awakens, each nominated in assorted Oscar categories. Gleeson is the fur company’s supervisor, whose later explosive scenes prove why he’s in charge and make me wonder how things might’ve gone if he and DiCaprio had switched roles.

Will Poulter, a.k.a. annoying cousin Eustace from the Narnia series, is a fellow furrier, virtually powerless in the face of Hardy’s juggernaut, convincingly torn between his marching orders and Doing the Right Things.

Meaning or EXPLOSIONS? Most of the film is an excuse for Iñárritu to re-team with his Oscar-winning Birdman cinematographer Emmanuel Lubezki for another series of daunting tracking shots through strange terrains. This time instead of a claustrophobic Manhattan backstage, their playground is the vast American wilderness with all its forests, water bodies, mountains, killer weather conditions, and frightening special-effects animals, both real and rendered. I wish more scenes were bathed in sunlight than cloaked in darkness, but that’s just a personal preference. If I’m meant to marvel at nature, I want to see it without its flaws masked or buried by post-production color timing.

Other possible lessons to learn:

1. Man is a resilient beast when he’s angry
2. Be nice to Native Americans, both the ones on your side and the ones sick of your kind and their sins
3. 19th-century life was super-hard, you guys
4. Nature is mean, but it’s also full of treasures if you know where to find them
5. Fur trapping used to be a nasty, cutthroat biz that made Mad Men look like a Pixar family cookout
6. That icky scene in The Empire Strikes Back where a wounded Luke used a dead tauntaun as a sleeping bag had some basis in reality

Nitpicking? Sensitive viewers may blanch at DiCaprio’s mauling that leaves him with deep Passion of the Christ carving wounds. Animal lovers won’t want to see what happens to a horse DiCaprio acquires later in the film and should probably hide their eyes for the next several minutes after the duo leaps off a cliff together. The rape scene cited in the MPAA rating lasts about five seconds, has no nudity, happens mostly behind an obstructive tree, and ends with good swiftly triumphing over evil without prurient lingering. For what that’s worth.

Minor movie peeve on its way to Cliché Town: a scene in which we watch someone slowly etch a unique symbol on the front of their canteen broadcasts loud and clear that this canteen will become a plot point later, that the filmmakers don’t trust the audience’s observational skills, and that they would’ve had the character just write “IMPORTANT CANTEEN” on it if that didn’t seem obnoxious. I can understand, say, the contrivance of the blood finger-painted on Finn’s helmet in The Force Awakens so we can tell him apart from his hundred copycat coworkers, but The Revenant doesn’t have that many canteens in it.

On a foundational level: stripped of all the tricky camera work and ostensible hardships endured on location every time the stars left their trailers, the plot structure is a basic revenge flick. Bad guy hurts good guy and loved one; good guy gets better; good guy gets revenge. Death Wish with a smaller body count, or X-Men Origins: Wolverine keeping the mutant healing factor but omitting codenames.

Tom Hardy: this time, not a laughable sidekick.

So what’s to like? If we pretend to concede the mistaken belief that Leo is entitled to a minimum of one (1) Oscar in his lifetime, I wouldn’t dispute the results if his performance as Glass were the one to do it for him. Our Hero is suitably hard to watch as a man undergoing multiple excruciating forms of agony for indeterminate but presumably extended periods of time (weeks? Months? No one ever mentions a date or looks at a calendar) while summoning up the moxie to strike back. He doesn’t talk much, but performances shouldn’t be graded on word count.

For me, though, the film’s true MVPs are the eyes of Tom Hardy. As the malevolent Fitzgerald, who wants his paycheck no matter how many people he has to mow down to get it, Hardy’s gaze burns holes through the camera lens with barely checked fury despite sharing a head with one of the scariest haircuts outside a Javier Bardem film. What’s even more unsettling to me is that the raspy, Southern frontiersman’s voice he chose for the role makes him sound exactly — and I mean exactly — like a specific person in our family. All Fitzgerald needed was a speech about how Indiana sucks and taxes are stupid, and I would’ve accused Hardy of stalking him and stealing his soul.

To me The Revenant was more intriguing to watch for its complicated moviemaking experiments than for its man-vs.-nature-vs.-man conflict triangle. There’s a certain curiosity to watching Iñárritu and friends treating cinema like a strange gadget with a thousand functions, testing each of them, trying different things, and then standing back and seeing what happens. That frightening how-did-they-do-that bear fight, the tracking-shot marathon, and the final harrowing showdown stand most apart from other films, so I imagine a few technical Oscars might be in order. Calling it “Best Picture of the Year” seems a bit much, though. If you’re a fan of flicks where tough guys duke it out to see who’s the toughest of all, this one’s inordinately better crafted than such macho dust-ups tend to be.

How about those end credits? No, there’s no scene after The Revenant‘s end credits, though I found it odd that they insisted Lukas Haas was hidden somewhere in this film, possibly as the star of a “Where’s Wilderness Waldo?” mini-game. While we waited them out, my son and I spent those otherwise unremarkable minutes discussing the twelve silent letters contained in the name “Domhnall”.