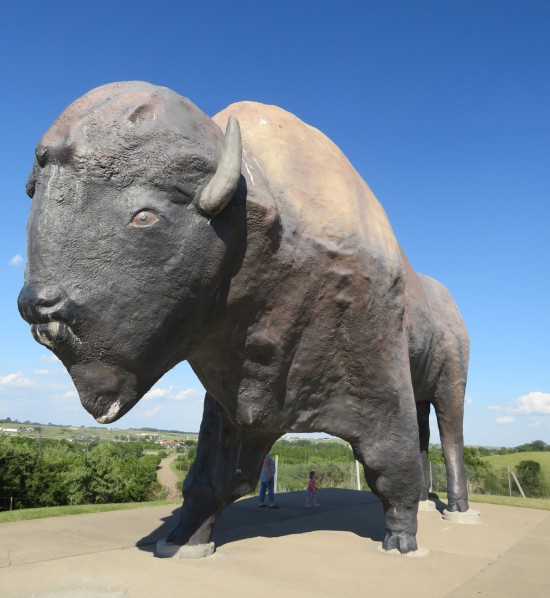 If all real buffaloes had been this size, the history of the American frontier would’ve gone very differently.

One of the all-time greatest songs about road trips is an album track by “Weird Al” Yankovic called “The Biggest Ball of Twine in Minnesota“. It wasn’t one of his classic pop-single parodies, just a wacky 7-minute riff on ’70s lite-country crooners that aptly captured the essence of roadside attractions in all their abnormal Americana glory. Over the past twenty years we’ve seen our share of eccentricity and ingenuity on the run, but in one respect we’ve found the reality comes up a bit short: there are not garish, campy, world-record-setting colossi standing in all fifty states. We’ve seen a lot of “big”, but not much “biggest”.

Clearly we should’ve driven more deeply into North Dakota sooner. A 131-mile stretch of I-94 through the heart of their unassuming state skirts past no less than three such mega-animals in three different towns. Sure, their national park was pretty and a few statues of historical figures were fine, but they shriveled in comparison to the frivolous joy of this towering trio, none of whom have ever been invited to star in their own Syfy Original Film.

END_OF_DOCUMENT_TOKEN_TO_BE_REPLACED

We are but worms at the feet of the statue of Dignity.

The three-hundred-mile stretch of I-90 through southern South Dakota is vast. Really, really vast. Until and unless you reach the Black Hills and the Badlands to the west, the flattened landscape across the central and eastern portions can lose their visual novelty to even the most innocent traveling yokel after about the first five or ten miles. Roadside attractions blessedly break up that monotony here and there — some ironically and some with utmost sincerity. It’s more rewarding when you feel compelled to stop for the sake of art appreciation than out of car-happy desperation.

END_OF_DOCUMENT_TOKEN_TO_BE_REPLACED 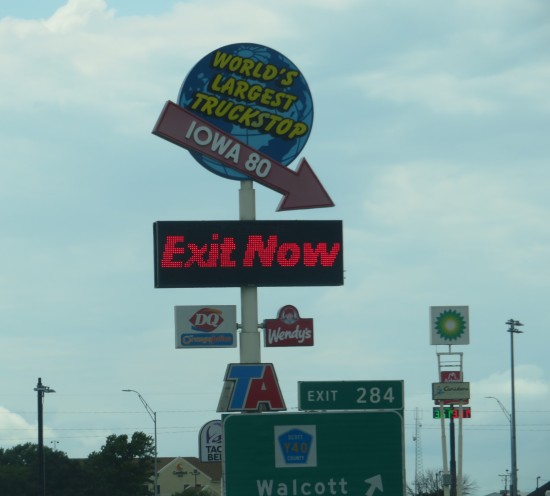 Among the roughly six hundred million Americans who’ll tell you road trips are their specialty right before sending you a link to their blog that you’ll never click on, Anne and I are merely meek, doughy amateurs compared to the real road-tripping professionals. I don’t mean canceled Travel Channel hosts or social media influencers with sports cars or wanted homicidal fugitives. I mean America’s truck drivers. They’ve been to more states than we have, they’ve seen more horrors than we ever will, they’ve brushed off more honking and more middle fingers than I hope I’ll ever have to, though I should probably stop competing with them on that front and maybe moderate some of my driving habits.

I imagine truck drivers scoff at civilians who take too much pride in their weaksauce hundreds-of-mile journeys taken in their puny four-wheeled jalopies. Truck drivers also have bragging rights for the fact that they get paid for all that driving, extremely unlike us pretenders. But they do have one thing in common with us: they love to be spoiled while they’re on the road. To those discerning highway kings and queens, Iowa offers quite the extended roadside intermission.

END_OF_DOCUMENT_TOKEN_TO_BE_REPLACED

A shared dessert of peach crisp at the Neely House in Muncie. Mmmm, sugar.

For the past several years my wife Anne and I have made a tradition of going somewhere — anywhere but home — for each of our birthdays. Last year my birthday trip was among the billions of traditions ruined by the pandemic, all of which paled in significance to the millions of lives lost (and still counting). This year is a different story. Anne and I have each received our pairs of Pfizer shots and reached full efficacy as of April 24th. This past Friday and Saturday the two of us drove out of Indianapolis and found a few places to visit in our eminently imitable road-trip fashion…

…with which we were nearly done and largely satisfied by the time we left the grounds of Minnetrista. Before we left town, we needed food and more art. Muncie offers a cornucopia of both.

END_OF_DOCUMENT_TOKEN_TO_BE_REPLACED

We may not have been allowed to leave the state in search of roadside attractions, but Indiana is no slouch in that department if you do the research and hunt them down like Mulder and Scully tracking aliens, except we do it to admire creativity and imagination rather than save the earth from world domination, even when the attraction’s origin is exactly the size you’d expect invaders from beyond to be.

END_OF_DOCUMENT_TOKEN_TO_BE_REPLACED

At the end of a long day of road tripping, after hours of walking and perusing and appreciating and photographing and learning and gawping and filling your head with new mental notes about memories-to-be and storytelling to come, sometimes all you want to do is return to the car and head straight home without stopping, not even for bathrooms or snacks.

Then you pass one last roadside attraction that catches your eye and won’t let go. It lassos your brain, sweet-talks your sense of exploration, and hollers like a rowdy bartender, “I reckon y’all could spare us just a few minutes ‘fore ya head for the hills, can’t ya?” Next thing you know you’re piling outta the car and takin’ a look-see at what they wanna show ya, if’n you ain’t yella-bellied and if you don’t get up too much gumption to ask why the voice’s southern accent is more cornpone than Rogue’s dialogue in old issues of Uncanny X-Men.

END_OF_DOCUMENT_TOKEN_TO_BE_REPLACED 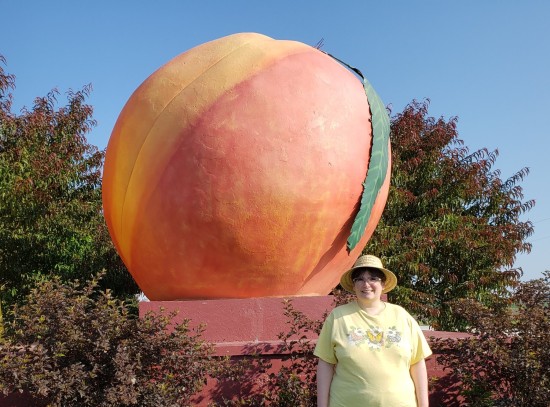 Nothing but respect for my Princess Peach.

When we tell anyone who’ll listen about our annual road-trip tradition, they don’t ask about dignified museums or American history or ordinary nature hikes. They want to know about the kitsch we’ve seen, the outlandish art and eccentric curation and super-sized foods and things beginning with “World’s Largest”. We hadn’t planned any such stops for this vacation, but whenever one happens to stand in our path, far be it from us to veer around like we’re too good for it.

END_OF_DOCUMENT_TOKEN_TO_BE_REPLACED

“High-five to the first tourists of the day! And possibly the month!”

From a narrative standpoint in a tale of Garfield statues, it may be counterintuitive to have a Chapter 2 that contains exactly zero Garfields. Our research phase brought up a limited number of bonus attractions in the same general vicinity, but two in particular immediately stoked our interest upon discovery. It’s not often you’re in a small town that can lay claim to an As Seen On TV artifact, let alone two of them. It’s rarer to find such objects related to a TV show we both really, really liked. And we had to be honest: how likely were we to venture out this far again in the near future? Or the oh-so-distant future, even? Why not catch them while we’re up here anyway?

END_OF_DOCUMENT_TOKEN_TO_BE_REPLACED

It’s a time-honored MCC tradition: every road trip concludes with bonus photos I skipped while compiling all the preceding chapters. However, this finale is a little more special than average.

Effective with this very entry, every single one of our annual road trips is now officially available for perusal and literary analysis on MCC from 1999 to 2017. All the major vacations from MCC’s 2012 inception to the present have been housed here exclusively from the get-go. As of today, all our prior travelogues from 1999 to 2011 have now been reposted and reformatted here for our own personal library to be shared with one and all — our lifelong, immutable road trip canon. Some write-ups were reprinted word-for-word, but in several cases extensive rewrites felt necessary and/or fun.

This curatorial project has been years in the making, and has now reached its final major milestone. It’s kind of a nice feeling.

END_OF_DOCUMENT_TOKEN_TO_BE_REPLACED 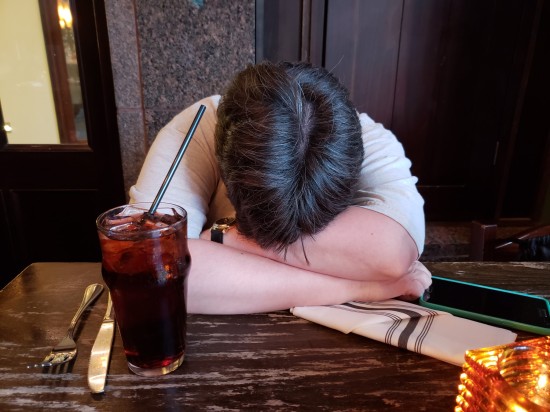 Anne waiting for paint to dry, glaciers to melt, and dinner to arrive at an Irish pub in Philadelphia.

Our 2018 road trip is behind us at last. After seven days and 2,056 miles together on the open road, Anne and I arrived safe at home Friday night, several hours later than expected and ready to retreat into overnight catatonia. Five out of six previous evenings ended much the same way — with a number of new achievements to our credit, new memories to add to our mental slideshows, new regrets to tally up, new aches and pains to nurse, and new letdowns from the unchecked items on our lengthy to-do list. In some ways that’s a typical vacation for the two of us, but what stings most are a few omissions that weren’t our fault.