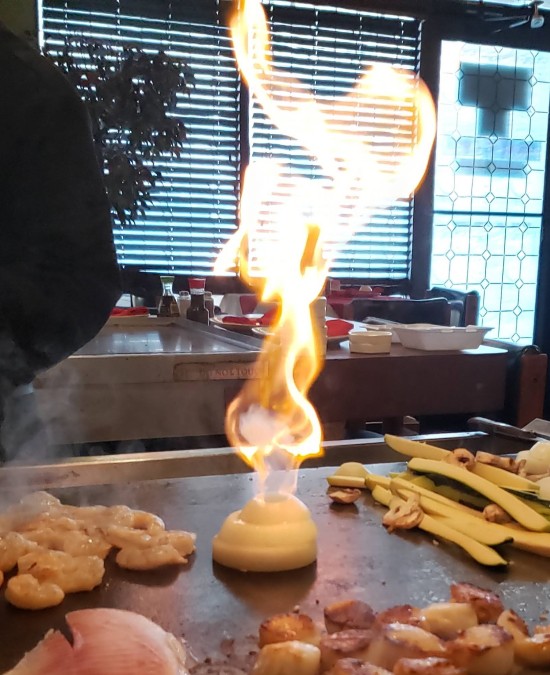 Burn, onions, BURN! Entertain me with your flames before you’re all hacked apart, divided among our plates, then mostly dumped back onto mine because my wife and son hate onions!

For the past several years my wife Anne and I have made a tradition of going somewhere — anywhere but home — for each of our birthdays. One-day road trips and events, such as 2019’s tour of the Art Institute of Chicago, give me the gift of new experiences and distract me from the physical decay at hand.

Previously on Midlife Crisis Crossover: last year my birthday trip was among the billions of traditions ruined by the pandemic, all of which paled in significance to the millions of lives lost (and still counting). We spent the entire weekend amusing ourselves at home so, Lord willing, I might survive to see the next birthday. In that sense TakeOutCon 2020 achieved its stated goals but will not become one of our household traditions. If the pandemic somehow spawns a sequel and a TakeOutCon encore becomes necessary in some future year, I will blame you, humanity.

This year is a different story. Anne and I have each received our pairs of Pfizer shots and reached full efficacy as of April 24th. We are now in the process of conducting field tests, by which I mean we’re experimenting with activities that society once deemed “normal”, which is entirely the point of the COVID-19 vaccines. It feels exceedingly weird as we slowly remind ourselves what old-fashioned outings felt like. If we can enjoy them without having nervous breakdowns, so much the better.

My birthday is Monday, but Mondays aren’t for celebrating. This past Friday and Saturday the two of us drove out of Indianapolis and found a few places to visit in our eminently imitable road-trip fashion. (More on those in forthcoming entries.) On Friday night we took a sort of intermission and went out for an early birthday dinner with my son and my mom in tow. It was our first dinner outside the house as a quartet since possibly Christmas Eve 2019. Between that and my birthday, it’d be cute to say we had two special occasions for the price of one, but the final bill was nearly the price of two special occasions.

I thought it’d be fun to try a teppanyaki-style Japanese restaurant (i.e., like Benihana but not actually them) twenty minutes from home that we’d never been to before. As is all the rage around the country right now, they were short-staffed and posted candid signs to that effect asking for our patience. We shared a table with three other strangers and sat in silence for a good while. We watched noisy birthday celebrations at two other tables. Eventually each respective party felt comfortable enough to mumble amongst themselves. All seven of us remained masked until our drinks, soups and salads arrived. Even then, no one would cross the invisible line between our table halves because in today’s shamefully turbulent social environment it’s impossible to know who’s congenial about their life choices and who’s liable to turn into a cruel rage-monster at the slightest degree of dissent. So we stuck to our camps.

Our assigned chef was pleasant and efficient, appeared to get all our orders correct, and seemed to be smiling under his mask as he plied his wares. When I took out my phone to snap a pic of the obligatory teppanyaki fiery onion volcano trick, his eyes went wide and asked if he could do it again. He’s possibly the first restaurant employee who’s ever asked me for a retake.

The onion volcano was the only real stunt he performed. We’ve been to other similar establishments whose chefs have entertained and done tricks and so forth. I didn’t really require or even expect all that. As a former restaurant manager, sometimes I simply enjoy watching professional cooking in action — partly for nostalgia, partly for the delightful smells.

It was that same food that finally broke down the barrier between our two families, as the other husband leaned over to me and confirmed what all seven of us were thinking: the meal was okay, but we’ve had better. He shared his recommendation for a place down in Greenwood; I mentioned an actual Benihana we’d liked up in Castleton. The weird detente eased up a little once we bonded over that mutual feeling of culinary just-okayness.

As we received our respective bills and they rose to leave after getting their change, the wife formally announced that, in case we were concerned, all three of them had had their shots. I confirmed we had, too. I nearly jumped up and high-fived her. We exchanged one last round of pleasantries, they took their leave, and for some reason another fifteen minutes passed before the waitstaff realized we were still waiting to pay. That delay made us miss Jeopardy! in its entirety, but we knew that was a possibility going in.

The freshly cooked meal itself wasn’t groundbreaking, but it didn’t need to be. We got to spend some awkward family quality time together. I got photos of a cool-looking food-torch that was more fun than setting fire to 49 tiny candles crammed into a single boring cake. And it was far better than sequestering at home with lukewarm takeout.