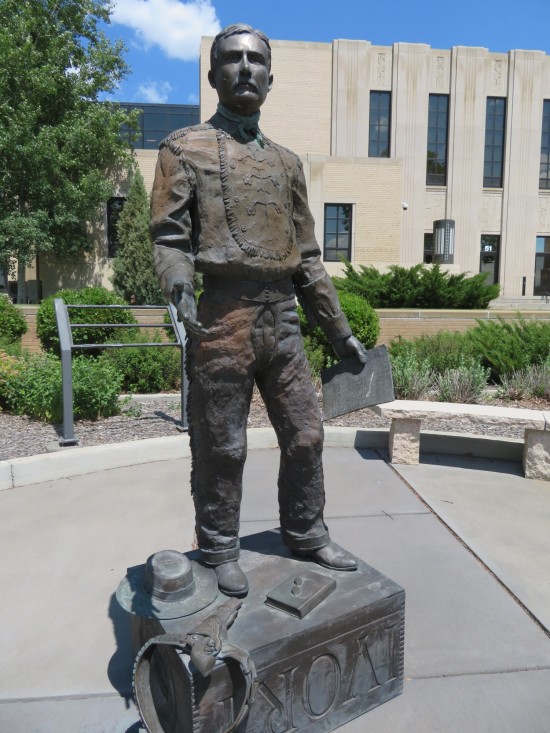 Taken together with other Presidential statues in this series, we see the Young Teddy/Old Teddy gap is nowhere near as wide as the one between Young and Old Elvis.

Tired of endlessly pretty panoramas from the Western U.S.? You say we should get back to some roadside art? Have we got some chapters for you!

We were hundreds of miles from Day Seven’s final destination and couldn’t dawdle at Theodore Roosevelt National Park no matter how lovely its cross-section of Creation looked. We weren’t too quick to jump back on the interstate after leaving — at the same I-94 Exit 21 but on its other side is Medora, a tiny but convenient tourist town named after the wife of the French nobleman who founded it back in 1883. They had a few items of note to us. 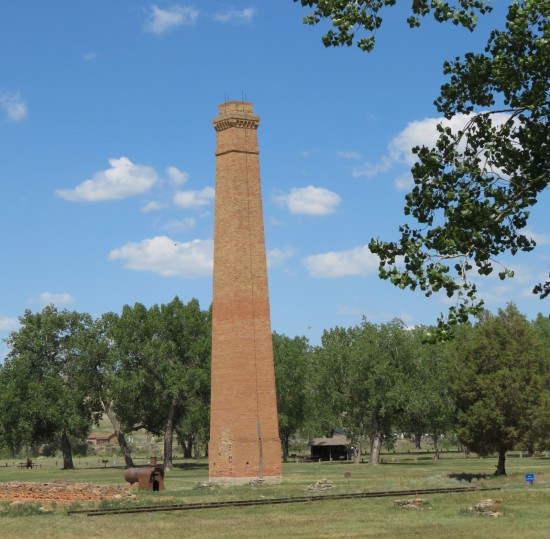 Outside Roosevelt’s namesake is Chimney Park, the nicely cultivated remnants of a meat packing plant that burned down in 1907.

A few streets’ worth of shops with quaint exteriors held what we sought. Anne naturally had a lead on another smashed-penny machine, her favorite vacation souvenir maker, which she tracked down to a stretch called Teddy’s Village, where it stood between Medora Western Wear and the Farmhouse Cafe. Medora also has its own statue of Theodore Roosevelt, who visited in 1903 while on tour through the region. Not every American town can boast that a President once personally paid attention to them. 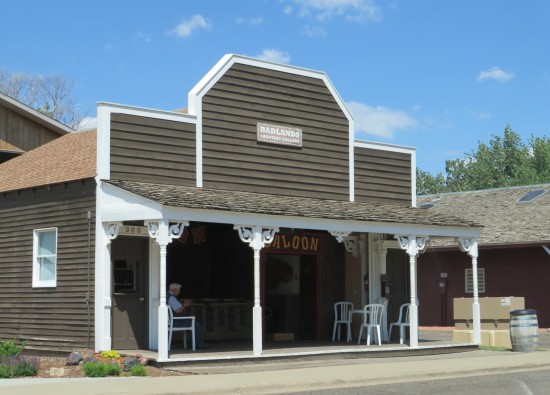 A shooting gallery exemplifies the local aesthetic. We also peeked inside a matching gift shop.

Medora’s Teddy by sculptor John Lopez, dedicated October 27, 2017. On its base is a quote from Roosevelt: “It was here that the romance of my life began.”

Sadly the smashed penny machine was out of order, not the first one to stymie us on this trip. Sources say as of September 2021 it was still busted.

As we rejoined I-94 East, this was our final shot of the Badlands horizon for the year. Anne reminded me I probably should’ve name-dropped the Painted Hills in some previous Badlands chapter, but I have absolutely no idea which mountains and hills were specifically those.

Down the way at Exit 61 was the much larger city of Dickinson, whose population has tripled since 2000 thanks to the North Dakota oil boom, though business had slowed a tad when last reckoned. Dickinson citizens who’ve made their way to the public eye have included actor Kellan Lutz (all five Twilight movies, CBS’ FBI: Most Wanted), Golden Age actress Dorothy Stickney (Anne and I saw her play Gene Hackman’s mom in I Never Sang for My Father), and Mitch Malloy, the current lead singer of ’80s hair-metal heroes Great White.

Our stop was mostly for errands — a cheap lunch and, more importantly, another 24-pack of bottled water, having exhausted our entire starting supply after all that outdoor tourism in the steadily escalating summertime heat. Of somewhat wider interest was their own Teddy Roosevelt statue, the younger one in our lead photo. Dedicated October 28, 2011, in front of the Stark County Courthouse, their life-size version by local sculptor Tom Bollinger commemorates how the Rough Rider looked on July 4, 1886, when he gave his very first public speech in Dickinson.

The Dickinson Dinosaur Museum might also have been cool. but we had too many miles to go. Hard choices had to be made.

Farther east at Exit 159 we jumped off in Bismarck, North Dakota’s very own capital. Among other highlights:

Also, there was the North Dakota State Capitol. We were inconsistent about visiting State Capitol buildings in our early road trips, but we’ve tried to pay a bit more attention to those in recent times, though we prefer the kind with spiffy, shiny domes on them. North Dakota’s version is an Art Deco building block that was built during the Great Depression after its predecessor burned down, and whose construction took two years and used a brief declaration of martial law to push through one of its more controversial phases. As of summer 2021 all interior public tours were suspended on account of pandemic, but the art around the parking lot was free and safe to view.

At 19 stories it’s the tallest building in all of North Dakota. 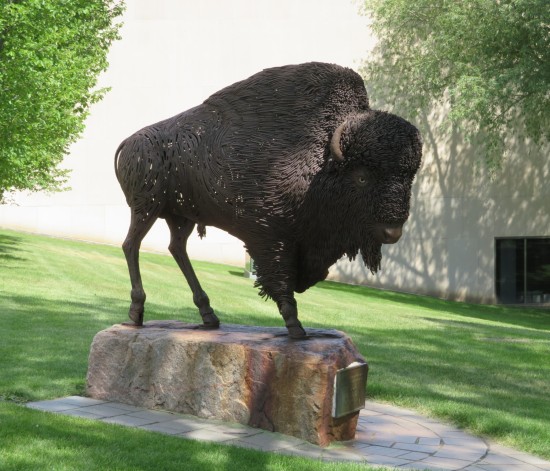 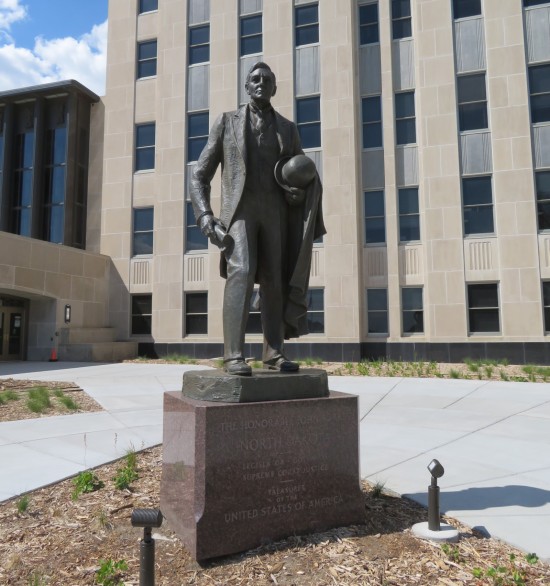 A 12-foot Sacagawea and li’l Pompey by sculptor Leonard Crunelle, dedicated in 1914 over a century before the duo would go on to costar in the long-running Image Comics series Manifest Destiny.

These weren’t all the statues we saw along I-94. They definitely weren’t the largest.