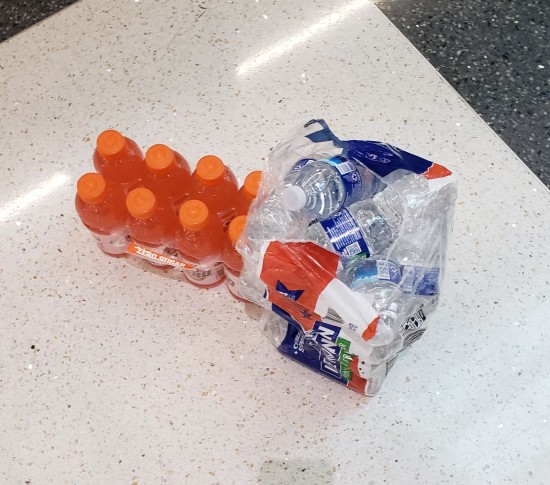 (give or take a few)

Clerk says to the guy, “Aren’t jokes supposed to start in a bar?” Guy says, “It’s cool, I brought my own.”

…okay, so that’s not really how Saturday morning went, but I really did trudge into an airport with that armload of bottles without getting jumped by security. Very kind mercy on their part, keeping any lingering post-9/11 sabotage paranoia on the down-low.

This year’s trip commenced with the three of us and our modest luggage crammed into a silver Jeep Safari SUV. Avis renters are allowed to choose their vehicle size, but never the vehicle itself. We take whatever we’re given, even when it’s not the size we requested, and we roll with it. We appreciated the inadvertently free SiriusXM radio, which should’ve required an upcharge if I’d asked for it, which I didn’t. But the Jeep Safari SUV’s engine took up nearly half its total length, leaving next to no room in the trunk for luggage or in the seats for comfort, what with all the excess luggage stuffed into our personal nooks and crannies because it wouldn’t fit into the trunk. The doorways were so narrow that Anne could barely slide in or out. At one point I banged my ankle against one of my seat’s slider tracks and ended up with a mild limp for the next two weeks that did not make Yellowstone more fun. But, again: we’d planned to roll with it.

We drove through intermittent rains throughout the first 300+ miles. Shortly after the Iowa 80 intermission, the dashboard got fidgety and started flashing a warning in yellow every time I turned on the car: “SERVICE 4WD SYSTEM”. I could cancel the message with a single button-push, but it would return with every new turn of the ignition. That phrase alone doesn’t tell me what it means or whether I should worry. A quick internet search informed me this catchall warning covered a range of possibilities from “Would you kindly change the oil someday” to “DETONATION IMMINENT.”

As a kid I had no dad around to teach me auto repair or secret engine codes. I’ve had a bad history with past vehicles and scary dashboard lights and thousands of dollars in repairs they cumulatively cost me, all of them with GM cars. Back home I drive a 2011 Kia Forte with a dashboard that stays silent until and unless it really, truly needs something from me. It rarely does. It’s not that clingy or ramshackle. But like a colicky baby, this SUV kept raising a fuss and couldn’t explain to me why. It wanted attention, and it wanted some ambiguously more or less now-ish.

As we entered Cedar Rapids, that message was joined by a second warning light. That one was easy to look up: a green ‘A’ in a circle means something’s up with the anti-lock brakes — again, unhelpfully ranging from “brakes are damp, be careful” to “ASSUME CRASH POSITIONS!” Worse, it only came on whenever we were at a complete stop — not while braking, but after having finished braking and sitting completely still. Then it would flicker on. I was rattled. 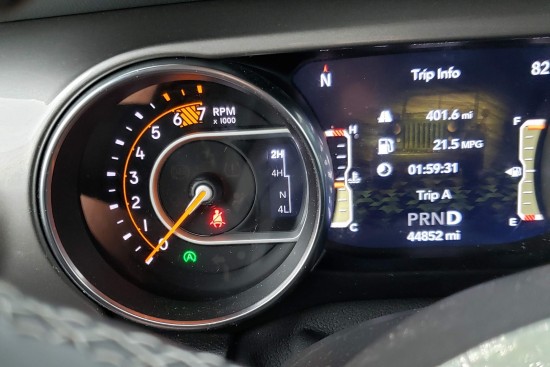 While stopped, I took off my seat belt to snap a pic of the ABS warning at lower left, but I forgot to catch the “SERVICE 4WD SYSTEM” advisory. Mea culpa.

Roadside breakdowns are among the biggest downers in our past vacations. A 2004 stopover in Cleveland when the alternator died in my own car is why we began renting cars for all our road trips ever after. Many of our experiences with the Avis fleet have gone perfectly; others, not so much. In 2006 I managed a leaky tire through Wisconsin and Minnesota (our first time dealing with an ugly Jeep SUV), but in 2013 we had to wait helplessly on a Boston interstate during morning rush hour to swap out a suddenly dead SUV for a Chrysler Town and Country tank. Then there was that time in 2017 when a clerk handed me the keys to a car that had literally just been turned in while we were waiting, only to have it begin overheating before we reached the city limits.

So rental car performance is a sore spot for me. More rain was in the forecast the next day, and we were heading west toward much smaller cities and towns where our automotive rescue options would keep dwindling with each passing state border. With steep mountainside routes ahead in our itinerary, I wasn’t in the mood to risk an awesome-looking Mannix cliff crash. 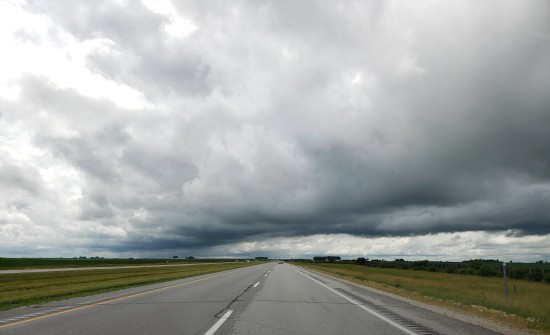 Sneak preview of the storm clouds we faced the next day.

I waited till after we finished dinner — an escapade in itself, to be narrated another time — to call the Avis hotline from our hotel room. Twenty-five minutes on hold yielded nary a single human response. Friday night in two different Cedar Rapids restaurants hadn’t gone well, but customer service issues are not a localized phenomenon here in America at the moment. I hung up, decided to try again in the morning, and slept fitfully.

Breakfast at a mom-‘n’-pop diner across the street went much better and helped a bit. I called Avis again and didn’t have to wait nearly as long. The service rep assured me that red dashboard lights are the really bad ones you have to worry about, and that green and yellow probably aren’t so bad. At no point did I hear auto-mechanic certainty in her voice. She could hear the uncertainty in my own and finally agreed to a car swap. Thankfully Cedar Rapids is large enough to have its own airport, one large enough to have hubs inside for all the major rental companies. We had a deal. 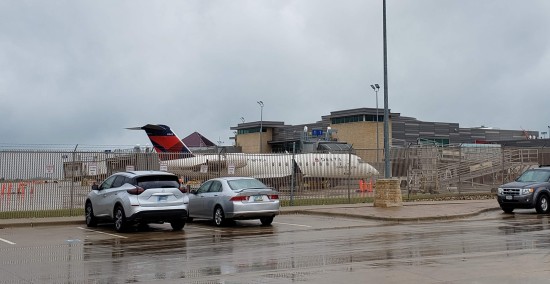 An airport large enough for name-brand flights, not just the lethally thrifty ones.

One catch: per the rental agreement, cars must be returned with a full tank of gas or else they charge you celebrity-chauffeur top-off prices for the shortage. We complied, entered the airport grounds, and found the parking lot for all the rental hubs with ease.

One more problem: we’d taken nearly all our luggage and possessions out of the car and dumped them in our hotel room. At the airport we realized we’d missed our jackets, a few other tiny objects, a 24-pack of bottled water and an 8-pack of Gatorade Zero.

(Pause here to allow a moment for environmental rants from those among you who hate that plastic bottles exist at all and that we enabled their evildoing makers by buying some. Okay to keep going now? Great, thanks.)

We saw no easy workaround. Anne grabbed the lighter stuff. I grabbed all the drinks. We walked the long distance from the space I’d chosen poorly and entered the airport, which was nearly deserted. The Avis counter had one customer ahead of me. I carefully dropped the drinks to rest my arms and waited my turn. Anne ran around the place for a few seconds of sightseeing.

Herky the Hawk, mascot for the University of Iowa Hawkeyes. 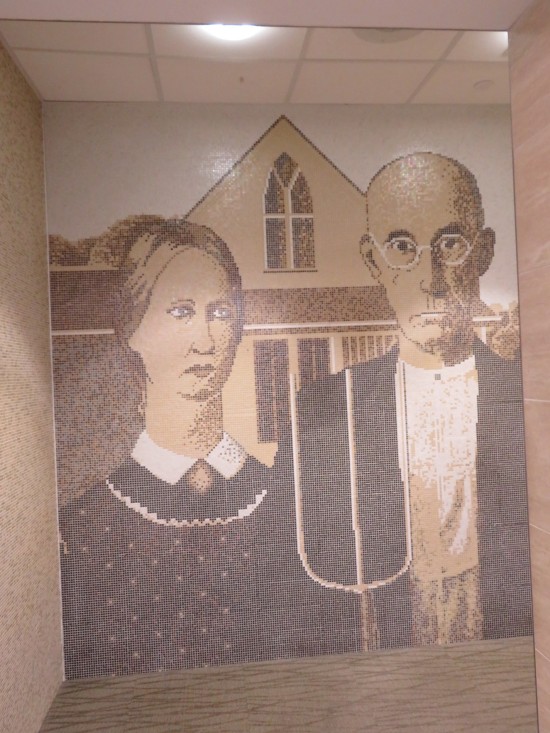 Locals love hometown legend Grant Wood’s American Gothic so much, someone recreated it with bathroom tiles.

I don’t know if she spotted any security guards while she sauntered. Nobody came up and said a word to me about all those liquids I’d just trundled in with, no questions about their potential volatility or my allegiances to any unhinged Iowan fringe groups. We haven’t been inside many airports, but I’d come to expect flinty judgment and snarly consequences. Neither happened. Lucky me. Even luckier, all that water weight hadn’t reignited my old chronic back pain.

Upon my turn, I kicked the drinks forward as I approached the desk and underwent the necessary bookkeeping arrangements. The extremely helpful and efficient clerk told me, “We only have one car to spare, a Nissan Altima. I hope that’s okay?”

“Yeah, that’s tine,” I said in Midwesterner deadpan. Inside my head, momentary astonishment gave way to a fairly loud dance party. Yes, an Altima would do, screamed the voices in my head while jigging to the howls of Blur’s “Song 2”.

We loaded up, headed out, retrieved my son and our possessions from the hotel, and continued into Cedar Rapids proper and beyond. The Altima would remain our chariot for the remainder of this vacation. Only one recurring hiccup of its own: after the odometer rolled past 9000 miles, the dashboard got fidgety and started flashing a warning every time I turned on the car: a gentle maintenance reminder that it was time for an oil change. I knew I could safely ignore that one. 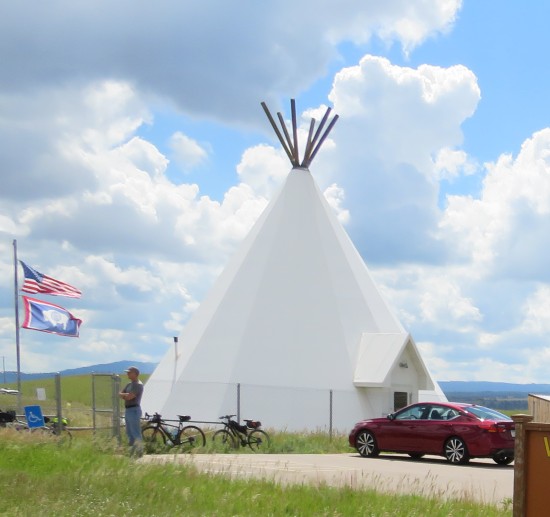 The Altima on Day Four, at an archaeological dig just inside the Wyoming border.

The Altima later that same day, several hours and a few hundred miles farther into Wyoming. On the same tank of gas.

At no point did the Iowa TSA ever hunt me down for the crime of Transporting Liquids Within a Mile of Aircraft, and for that I’ll always be grateful.