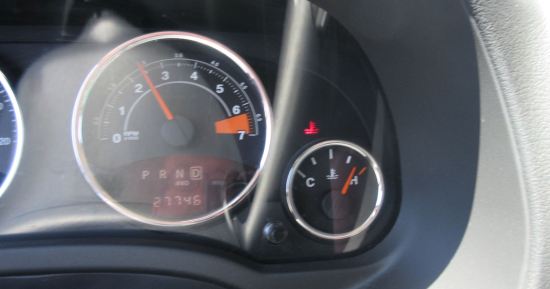 Pro driving tip: red lights on a dashboard are not good. They are not reminders that Christmas is coming.

Every year since 1999 my wife Anne and I have taken a trip to a different part of the United States and visited attractions, wonders, and events we didn’t have back home in Indianapolis. From 1999 to 2003 we did so as best friends; from 2004 to the present, as husband and wife. My son tagged along from 2003 until 2013 when he ventured off to college, and again in 2016 when we returned to New York City by plane, a rare departure from our usual road trip format. This year Anne and I felt the road beckoning to the two of us once more and returned to our usual wingless, wheels-down approach to viewing the American countryside without skipping all the informative and/or imaginative stops between points A and B.

After months of deliberation, for 2017 our ultimate destination of choice was the city of Baltimore, Maryland. You might remember it from such TV shows as Homicide: Life on the Street and The Wire, not exactly the most enticing showcases to lure in prospective tourists. Though folks who know me best know I’m one of those guys who won’t shut up about The Wire, a Baltimore walkabout was Anne’s idea. Setting aside my fandom, as a major history buff she was first to remind skeptics who made worried faces at us for this plan that Maryland was one of the original thirteen American colonies and, urban decay notwithstanding, remains packed with notable history and architecture from ye olde Founding Father times. In the course of our research we were surprised to discover Baltimore also has an entire designated tourist-trap section covered with things to do. And if we just so happened to run across former filming locations without getting shot, happy bonus.

As residents of a sizable metropolis that sometimes appears on “10 Dangerous Cities” lists ourselves, we know what it’s like to dwell someplace that has plenty of worthwhile businesses and activities that are safe to check out as long as you know which ‘hoods aren’t the kindest to casual bystanders. We did our homework, vetted our possibilities, steeled our nerves, asked our friends to stop making those faces, and made it happen. Please be assured no chapters in this very special MCC series will contain our obituaries. We proved to ourselves that a Baltimore getaway is doable and has highlights to offer. As added incentive, we discovered a number of historical stopovers on the way there and back again to enliven our driving experience.

But first we had to escape Indiana. That should not have been a hard part in our journey.

After the Ohio incident of 2004, I’ve been an annual Avis Rent-a-Car customer since 2005. Except for the one time our SUV broke down on a Boston interstate in 2013, and that other time when the clerk on duty had locked the doors for an afternoon nap, my usual Avis location has been rather helpful and responsive to our needs and kept us road-ready and comfortable with their vehicles. This year due to timing issues I made our reservations at a different Avis location nearer to our house. As with fast food or Walmart, the general assumption on the customers’ side and the goal on the companies’ side is that any given corporate chain should operate identically from one store to the next. I hoped that would be the case with Avis.

The nearby location opened at 8 a.m. Months in advance I’d arranged for pickup of something from the “full-size sedan” category at 9. We arrived on time only to be told, “The cars haven’t been delivered yet.” The guy behind the counter gestured toward a white pickup truck outside and said he could offer that to us instead. Perhaps we’re finicky, but we had no use for his idea of having our luggage tossed around an open truck bed over the course of several hundred miles and potentially getting drenched in inclement weather.

A couple minutes into this disappointing renegotiation, another customer — an elderly gentleman who maybe just needed a ride to a church fish-fry or something — happened to show up and return a bright red 2016 Jeep Compass SUV. The gent seemed to have no complaints about it, and it passed the clerk’s rigorous inspection process, which consisted of turning the key and hearing the engine start. The clerk offered the Compass to us instead if we gave him ten minutes to wash it off. A bit put off and anxious to get our week started, we rolled our eyes and consented.

We drove home, we filled its inadequate trunk with baggage, and we hit the road in search of wonder and awe and eventually lunch, not necessarily in that order. We’re the Goldens. This is who we are and what we do.

Forty-odd miles east of home, the dashboard lit up red as the needle on the temperature gauge approached level ‘H’. I know that light and its consequences far too well. The first car I bought at age 18, a used lemon that brought far more troubles into my life than my ex-wife ever did, counted among its earliest failures a leaky coolant tank that brought the car to a halt every time it ran out of coolant and overheated. I’m not a fan of that light.

I pulled over at the very next gas station and wasted $13.90 on a jug of antifreeze to top off the tank, which a quick check revealed was less than half full. That seemed to shut the red light off, and we were back in business, keeping on trucking and searching for beauty and historicity and hopefully creative food. We’re the Goldens. This is who we are and what we do.

A few miles later, the temperature light flashed red again as the needle again was pulled toward that hideous ‘H’. Dead ahead was a rest stop where I pulled over, popped the hood, and found the coolant tank’s cap off. Either I’d forgotten to close it, which I can’t rule out at my increasingly forgetful age, or it had popped itself off. I shut the cap, shut the hood, and got us back up and running again, looking out for adventure and whimsy and preferably lunch first. We’re the Goldens. This is who we are and what we do, and what we do is get really cranky when we’re hungry and hindered.

I pulled over at a travel station outside Knightstown and called the Avis roadside assistance hotline. After one ten-minute conversation with a service rep that ended with accidental disconnection, a second call yielded more unbroken, if disappointing results. Nearly every Avis location in central Indiana closes early on Saturdays. Since the SUV was technically still movable, we would have to bring it in for swapping at the only location that would be open by the time we returned to town: the Avis at the Indianapolis International Airport — outside Indianapolis to the southwest, fifty miles from Knightstown and in the opposite direction away from Baltimore. 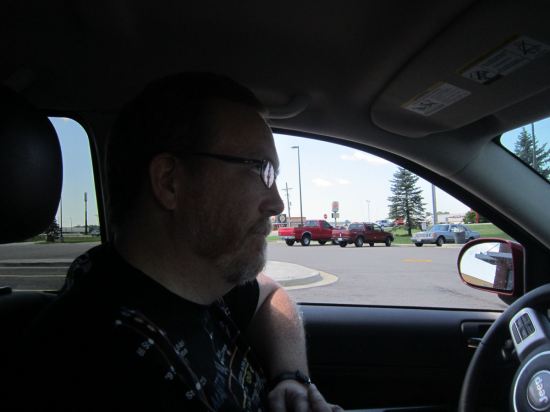 That moment when you’re waiting for a corporation to call you back in the middle of relative nowhere with good news or possibly cash prizes.

We were not happy. I was even less amused when the service rep told me we needed to refill the gas tank before returning it, per the rental agreement. But we couldn’t trust a 600-mile road trip to a possible clunker that might leave us stranded in the middle of the Appalachians. For now, we had to play it their way and hope they’d make concessions later for their vehicle failure.

We drove the fifty miles back to the airport, stopping only to buy $8.55 in wasted gas, while the red light went on and off and on and off and on and off, making sure we stayed edgy and upset the whole way. We dropped off the Compass, and alerted the receiving agent that this was an exchange, not a straight-up return. We were ushered to wait at a booth while struggling to carry all our luggage with us in one go. After a few minutes of standing and straining and shifting around and muttering, another attendant gave us keys to our replacement vehicle, a Toyota RAV4 that pretty much buried the Compass in every way conceivable — comfort, acceleration, maneuverability, space-age gadgetry, and so on. ‘Twas a lovely SUV, but all throughout the process, the attitude of every Avis rep, whether in person or on the phone, was identical: none of them seemed to think anything of that haunting dashboard light. No apologies were offered, no concern was expressed, no concessions were ever offered, up to and including at the point of drop-off the next Saturday. It’s as if we were returning the Compass for nuisance reasons, like the color clashed with our outfits or the word “Jeep” reminded us too much of that creepy critter from the old Popeye cartoons. They accommodated us without taking us seriously.

We weren’t in the mood to argue at length after having already wasted a couple hours on indulging Avis’ own oversights. All we knew is we wanted to go and we wanted our happy road trip to start now. We sped out of the airport, desperate to get away from Avis, and drove back over the exact same fifty miles, pausing only for a quick lunch at an east-side Wendy’s in hopes that we’d stop starving and find our way back from the grouchiness onset for which we had Avis to thank.

Several hours later than we’d hoped, we exited Indiana and returned to the confines of our old arch-rival Ohio.

I hesitate to call this “a good sign”, but it did mean we were really on our way.

We made zero stops in Ohio, as planned, keeping the pedal down for the next 3½ hours. However, thanks to the delay caused by mechanical issues, we reached Zanesville just in time for a thunderstorm system that would dog us on and off for the next hundred miles. At the time we prayed this wouldn’t be an omen of our entire week ahead, but we had no idea what storms were in store for the Midwest over the next several days.

Lucky for us that our vacation wouldn’t be in the Midwest, then.

Bad timing. Surprise storms. Finding silver linings anyway. We’re the Goldens. This is who we are and what we do.