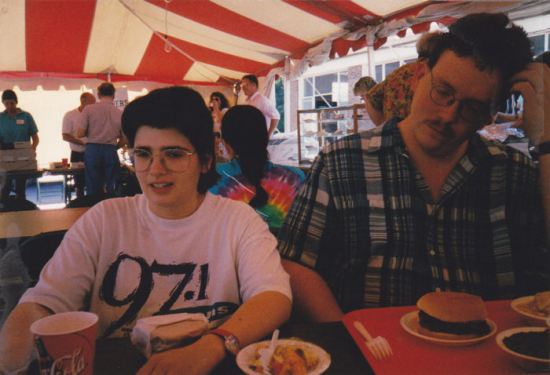 Flashback to 1999: two twentysomething youngsters enjoy a church fish-fry with no clue what their future held in store.

Every year since 1999 Anne and I have taken a road trip to a different part of the United States and seen attractions, wonders, and events we didn’t have back home in Indianapolis. From 1999 to 2003 we did so as best friends; from 2004 to the present, as husband and wife. My son tagged along from 2003 until 2013 when he ventured off to college. From 2004 to 2011 we recounted our experiences online at length for a close circle of friends. From 2012 to the present we’ve presented our annual travelogues here on Midlife Crisis Crossover for You, the Viewers at Home, which I’m grateful includes some of those same friends. (For newcomers to the site, our complete road trip checklist will direct you to hundreds of previous entries covering our explorations, including remastered retellings of our pre-MCC outings in 2001, 2006, and 2011.

Every tradition begins somewhere. As longtime friends and readers might expect, ours began with a convention.

We’ve told the story of our relationship before, though it’s worth noting that in 2017 I will have known this amazing woman for thirty years. In July 1999 we were each in a vastly different place than we are today. I was a two-time college dropout who hated being a McDonald’s manager but had no idea what else to do with life. I’d undergone the agonizing divorce process in 1996 followed by bankruptcy in 1997. Between weekly child support and car payments negotiated at terrible post-bankruptcy rates, disposable income wasn’t plentiful by any means. Thankfully my section-8 apartment was cheap, even after my annual raises eventually added up enough to disqualify me from the income-based discount.

Meanwhile two buildings over in the same complex, my best friend Anne had her own barely furnished apartment, her own divorce behind her, a political science degree that looks keen on paper, and a full-time job at a different McDonald’s, where she rebuffed any thoughts of going into management and thereby did qualify for lower rent based on her hourly wages that were a buck or two below today’s national minimum wage. She also had an overprotective dog named Harrison who loved her unconditionally and regarded me as The Enemy.

Neither of us was truly ready for romance, much to the consternation of virtually everyone we knew, but we hung out together whenever time permitted — watching TV and/or videotapes; going to the movies; shopping for action figures at various toy shops, department stores, and flea markets; inviting me to church with her on Sunday if my work didn’t interfere; and so on. And each year we would attend the Indianapolis Thanksgiving Sci-Fi Celebration at the big Marriott on the other side of town. That was a treat we looked forward to, the chance to hang out with people like us and to meet and get autographs from actors in TV shows we liked. Back in ye olden tymes, autographs were included in the price of admission and it was an awesome time to be a geek in its own way.

November 28, 1998: Nichelle Nichols was one of four classic-Trek superstars to grace Indy with their presence at “Slanted Fedora Presents the Fab Four Tour” according to Anne’s ticket stub.

After the advent of eBay, autographs became a much more convenient get-rich-quick paradigm as it empowered retailers with access to national and international buyers beyond their own neighborhoods. Stars naturally decided they wanted a bigger piece of that pie, and charging twenty or thirty bucks an autograph — harsh to us in those days — became standard practice and the whole thing turned into a major commodity. Cons stopped being cost-effective entertainment after that, but we scraped together what we could to keep attending Slanted Fedora’s shindigs.

Meanwhile behind the scenes, things were falling apart. Their “Sci-Fi Celebration” went on extended hiatus when the showrunner — who’d usurped the time slot from previous fan-run institution Starbase Indy — found himself the subject of a federal fraud investigation and was effectively drummed out of the biz. Beyond that… well, we did have another, smaller comic book show that was held in one of that same Marriott’s ballrooms from time to time, but it wasn’t the same. For the majority of our childhood and our young-adult lives, Indianapolis didn’t have any other sizable geek cons to its name. The great and powerful Gen Con wouldn’t move here from Milwaukee till 2003. Local fans wouldn’t truly bring back Starbase Indy and retake Thanksgiving till 2004. We had to wait till 2014 for the first quote-unquote “comic-con” to reserve significant space in our Indiana Convention Center.

Except for those hobby-related forays, and the frequent trips to Ohio’s Kings Island amusement park that were more or less routine for every Hoosier, Anne and I were homebodies of equally sedentary stature. Driving around town to find things to do was no big deal, but we didn’t venture much outside the immediate counties. One exception came in the spring of 1997 when we got up enough gumption to drive a whole hour northwest to a much smaller Trek con in Lafayette just for the opportunity to meet Garrett Wang from Star Trek: Voyager, in honor of Trek’s 30th anniversary. So we added that to our scorecard. 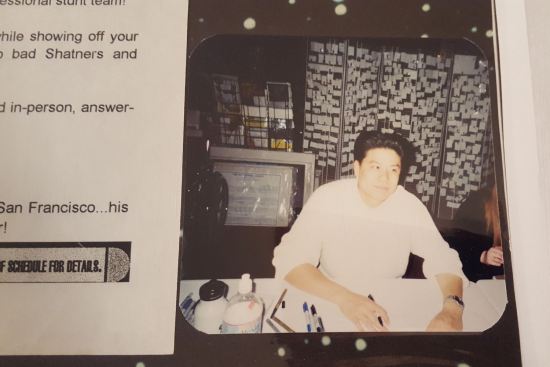 By the time it was our turn to meet Ensign Harry Kim he seemed tired and done with everything. His mounting dissatisfaction has been mounted and preserved for future generations in one of Anne’s scrapbooks.

We each came from families with unimpressive travel records. My mom and grandma couldn’t afford capital-V Vacations and settled for taking me to visit old relatives every year in southern Indiana. My only steps into other states had been a one-time jaunt to Louisville for a ferry ride with my aunt; a 1991 one-day jaunt to Chicago with a friend who did all the driving (sadly, I haven’t seen him since 1994), and, of course, Kings Island. End of list.

Anne was one of five children whose parents had no possible way to pay seven ways anywhere far away, except this one time they stayed overnight in Cincinnati and then hit the famous Cincinnati Zoo and, stop me if you’ve heard this one, Kings Island. Also, her grandmother once took her on a road trip to Maine, so that was a lifetime highlight for her. Bottom line: by the average nuclear family’s standards, we didn’t get out much.

At some point in 1999, one of us began to dream and the other joined in. There were other cities in America, many of them beyond Indiana’s borders but not necessarily out of reach. Some were larger than Indy, and a few of those just so happened to be blessed with their own conventions. San Diego was an impossible dream and remains as much to this day in 2017, but it wasn’t the only con ever.

Enter Wizard World Chicago 1999. It was probably the largest comic con within 500 miles of home. It was advertised heavily in the pages of Wizard Magazine, which had been running the former Chicago Comic Con since 1998 after a good 26-year run with the previous proprietors. I was a monthly Wizard reader even though I knew their coverage, opinions, and sense of decorum were lopsided in countless ways. In their hands it wasn’t just a comic con — they’d finagled great big Star Wars actors onto their guest list. Two months after the release of The Phantom Menace, we’d never met a Star Wars actor before. To us this was a huge deal, especially to Anne, whose Trek fandom is rivaled only by her Star Wars fandom.

We figured if we could handle a 2½-hour excursion southeast to Kings Island (I-465 to I-74 East to I-275 North to I-71 North — the route’s still memorized), then we could handle driving three or four hours northwest to Chicago. 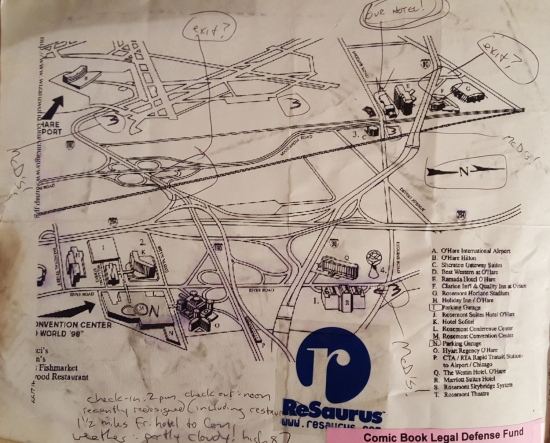 Back in those days before smartphones, we had to find our way from Point A to B using paper maps and the relatively new website called MapQuest from which you could print out directions to take along. The town of Rosemont also posted their own layout online, which was handy for note-taking but iffy for practical navigation.

We were nervous and excited. We packed our crappy 35mm cameras, I packed some comics to be autographed, and we agreed to take along a cooler filled with meats, cheeses, and buns for a responsible, non-extravagant Saturday lunch. We drove up Friday after we both got off work, heading directly to the hotel because we’d only bought $20 Saturday passes for WWC. Paying double for full weekend admission would’ve been pushing our meager budget.

Neither of us remembers the particulars of the drive itself, though I presume the Dan Ryan Expressway was the same nightmare it always has been and we hated every mile of it. But we’d arrived. Thanks to the combined magic of Rand McNally products and 1999 gas prices, we navigated our first trip to Rosemont, Illinois, without dying or accidentally taking a wrong turn into Michigan.

That easily recognizable Rosemont water tower, and the McDonald’s where we’ve eaten quite a few meals over the years despite our history with them. It may be too familiar, but it’s one of the cheaper, conveniently located alternatives.

We stayed at the Best Western up the street from the Rosemont Convention Center, but were unhappy to find they’d screwed up our reservation and put us in a 1-bed closet instead of the 2-bed room I’d called and requested. As the guest with the higher income I was paying for the room, which by Anne’s reckoning meant I should have the bed while she offered to sleep on the floor. I pause here to note for the record that when I say we were best friends, I am not winking at you when I type those words. My chivalrous attempt to flip the arrangement fell on cute, resistant, stubborn ears.

We awoke on Saturday, July 17, 1999, despite the wrong dates listed on WWC’s Wikipedia that I don’t feel like fixing. If you believe in destiny, serendipity, or for some reason numerology, here’s some fun trivia: that day was exactly five years before our wedding date. We had no idea and would’ve scoffed at any well-meaning time travelers who tried to spoil the surprise.

We gathered our things, headed off to the really big show, and stepped into a whole new world. We weren’t at Kings Island anymore.