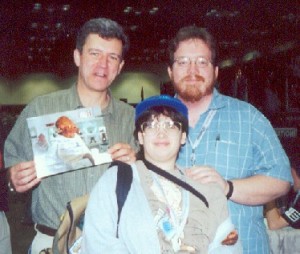 Happy best friends hanging out at Star Wars Celebration II in May 2002, posing with puppeteer Tim Rose, who gave life to Admiral Ackbar in Return of the Jedi. Back then her glasses were as wide and as round as the moon, and so was I.

[The following two-part entry is a 2002 essay written tag-team style with the best friend who would later become my wife, originally composed for friends who’d wanted to know how we met. Original posting dates and authorship are appended to each chapter for reference, especially for those who’ve never read my wife’s writing.

Though these passages are now eleven years old and cry out for rewriting, I’ve decided to present this encore generously intact, albeit with mild elements of special-edition Lucas-izing. I deleted one pejorative, two bits of slander, two beyond-personal items, one misuse of “literally” my conscience wouldn’t abide, and a belabored Bloom County reference that made zero sense after the preceding edits.

I’m revisiting this for a reason. More about that at the end of Part Two.]

Anne and I first met when we both took the same German class when I was in tenth grade. Although she was one grade ahead of me, I’d known of her a bit before then because she had a sister my age whom I’d known since seventh grade. She and I were the two best students in the class, and constantly competed in a good-naturedly vicious way for the top spot. If I remember correctly, though, she had me beat. She’d been a WWII buff for years, and read extensively about Germany in general and Hitler in particular. I still remember the time when the teacher (one Frau Schmitz by name) basically turned the class over to Anne and let her give us a speech about Hitler. Anne proceeded to do so…with no notes, and no real preparation beforehand. As I recall, her extemporaneous speech filled two solid class periods over two days — roughly 100 minutes total — with what she knew about Hitler before Frau Schmitz finally stepped in and resumed teaching. And I have to preface that sentence with “as I recall” because I also recall nodding off for at least a few minutes, so some details are a bit hazy.

Flash forward the fall after I graduated high school. I was a poor college student who decided to get her very first job…at the local McDonald’s.

The day I was orientated, an employee came rushing down the stairs and told the manager I was with that someone had got stabbed in the parking lot.

That employee took one look at me and blurted my name out in surprise.

For the next several years, Randy and I worked at the exact same restaurant. We generally got along well. He was moved into management, while I remained a little chess piece.

Then, I decided to get married…

Um. Anyway. Moving on. Anne and her man got married. We both continued to work at the same McDonald’s, her as a peon, and I as an advanced peon cleverly disguised as a low-level dictator. A year or so later, the wrong girl and her boyfriend were hired at our store, both of them working many closing shifts alongside me. Eventually, they broke up, yadda yadda yadda super-extended TMI yadda yadda, she and I had a son and got married. Anne’s brother (a close friend of mine at the time) even served as my Best Man.

Meanwhile, behind the scenes, Anne’s marriage was falling apart.

Anybody that thinks that someone will change their bad habits once you marry them is terribly foolish and has never once seen a soap opera.

There are some people who are too young to get married and I was one of them.

Working full-time and going to college is tough on any relationship. Couple that with the fact that we had opposite work schedules and you find that we rarely saw each other.

Maybe that’s why we stayed married for so long.

I’m not going to get into the mundane details of everything that was wrong with my marriage, but the bottom line is: Liking Star Wars and Pepperoni Pizza are not sufficient enough commonalities to maintain a good marriage. Especially if they are your only commonalities.

A couple of months after I graduated college, he left.

I was devastated, but learned to move on.

In the meantime, Randy had married the mother of his son.

They had even less in common than I had had with my husband.

Every male has their Young And Stupid phase. It’s the period of their life during which they feel they’re have the most fun, hold the least amount of regard for elders and superiors, act on their most senseless impulses, and create their most vivid memories. Unfortunately, it’s also the one portion of their life they spend the rest of their lives trying to atone for and forget. It can’t be predicted. It can’t be prevented. The male won’t even know it’s happened and passed until a year or two later…if he’s self-aware enough to catch on that quickly.

My Young And Stupid phase began at age twenty-one with the meeting of the afore-mentioned “wrong girl”, and ended a year later, a couple of months after we got married.

We managed to stay married for about a year and a half, until we (more or less) mutually decided to call it quits. As with Anne and her husband, my wife and I had next to nothing in common. At all. I think we only stayed together as long as we did for the sake of our son. But in the end…that wasn’t enough. It was a decision that tore me apart on many different levels. Over of the course of years, it led to a number of unpleasant consequences, including (but not limited to) divorce; bankruptcy; complete disdain for religion; and Indiana’s harsh, labyrinthine child-support program.

But I still remember that one week in June 1996, about a month after we called it quits. We still lived together because she didn’t have her act together enough to make other living arrangements. She’d gotten herself a checking account a few months earlier, and had had it for a whole month before she started bouncing checks left and right. She’d quit her decently-paying day job to go work third shift at a Steak-‘n’-Shake. Then, that one week…she found herself a new man, who pretty much provided her with an escape hatch out of our…well, rather, out of my home.

In the meantime, I was a complete broken-down mess. I had friends who knew what was going on, who wanted to help however they could…but in my mind, none of them could really understand what I was going through. Most of them were younger than me, almost all of them weren’t parents, and absolutely none of them had ever been married. But I had to talk to someone, or I’d explode.

That’s when a name popped into my head literally out of the blue. It was the name of an old friend who worked for the same company I worked for, but who’d worked at a different location for the last several months, and who worked opposite shifts from mine, thus making mutual conversations an unfortunate rarity. But somehow…somehow, I just knew deep down that it was the right name to call.

Before the impulse could fade, I picked up the phone and called an extremely surprised Anne at work.