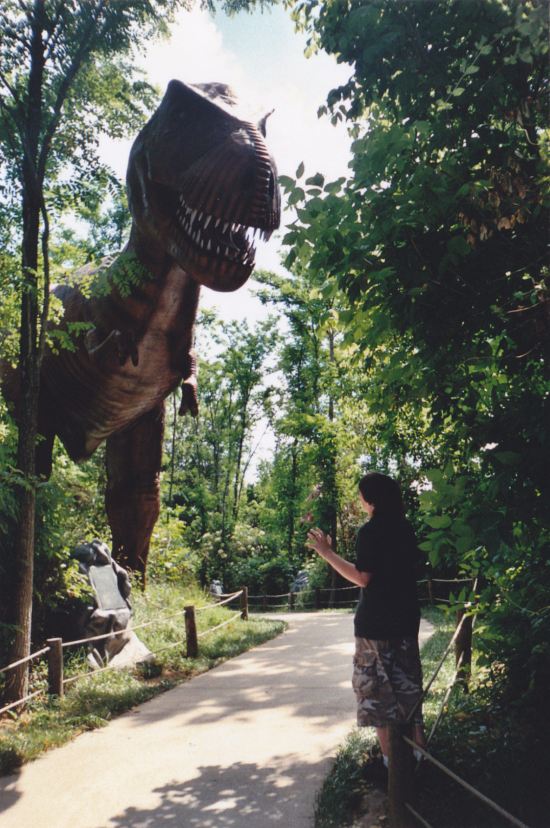 “CALM DOWN, KID! I JUST WANT TO TELL YOU HOW YOU CAN SAVE 15% ON YOUR CAR INSURANCE.”

Every year since 1999 Anne and I have taken a road trip to a different part of the United States and seen attractions, marvels, history, and institutions we didn’t have back home in Indianapolis. From 1999 to 2003 we did so as best friends; from 2004 to the present, as husband and wife. Beginning with 2003’s excursion to Washington DC, we added my son to the roster and tried to accommodate his preferences and childhood accordingly. The next few vacations worked for all of us as a family to varying degrees, but for 2007 we changed up our strategy a bit and designed an itinerary for what would prove our most kid-friendly outing ever. Granted, he was now twelve years old and less kid-like than he used to be, but the idea was sound in principle.

Today we kick off yet another special MCC miniseries representing the original travelogue from our 2007 drive from Indianapolis to Orlando, Florida. Some hindsight editing will be included along the way as part of the “special edition” processing. Enjoy!

It seemed a shame to leave our new home and doggie behind so soon after acquiring them, but the road beckoned once again. The night before takeoff I’d picked up our third annual rental car for the occasion, once again to avoid repeating the 2004 Ohio disaster. The first two times, we’d rented an SUV just for fun and space. This year I was determined to cut convenient corners where possible to minimize expenditures in the wake of our recent mortgage-sized purchase. Our assigned vehicle, then, was a modest 2007 Chevy Impala. The car was still roomier and more technologically advanced than either of our own cars. Gas mileage calculator! Dashboard tire pressure gauge! steering-wheel radio controls! CD player! To us this was the Car of the Future. Unfortunately it was nowhere near as comfy as our previous vacation vehicles. I missed the SUVs’ ample leg room.

The early morning hours were spent driving the same stretch of I-65 we’d taken in 2005 to head to Texas, though this was the first time we noticed a sign for a restaurant called Dizzy Whizz, whose billboard touted it as the “Home of the WhizzBurger”. There, I think, is a sandwich name that wasn’t focus-grouped nearly hard enough. I can only imagine the woe betided to the foolhardy man who would dare eat a Whizzburger and a White Castle slider in the same sitting.

Other than gas, our first stop of the day in Cave City, Kentucky, home of famous Mammoth Cave. We could’ve gone for the obvious, the deep dive into natural wonder. We opted instead for the opposite: the plastic fantastic Dinosaur World! 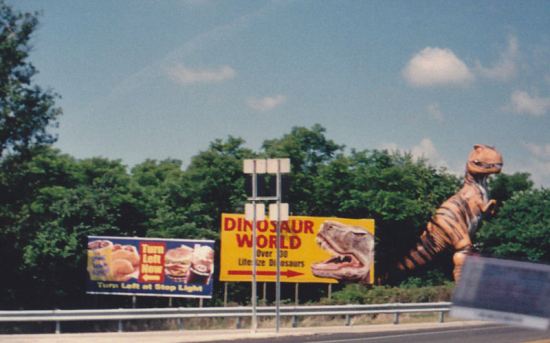 Gotta appreciate a roadside attraction that sets up a great big freebie right there by the road.

We had passed it in 2005 on our way to Texas and made a mental note to stop another time as my at-the-time 10-year old son demanded it. Now, nearly 13, it wasn’t nearly as appealing to him. It has some nice, peaceful walking paths, but its intended primary draw are the dozens of sculptures and recreations of real dinosaurs. Here, the world “real” is subjective depending on your worldview — judging by these amusing displays, either neon hides and googly-eyes were the best that natural selection could do, or the Lord created them in the image of a Sergio Aragonés gag strip.

Sad Triceratops is sad you won’t stay and be his best friend. 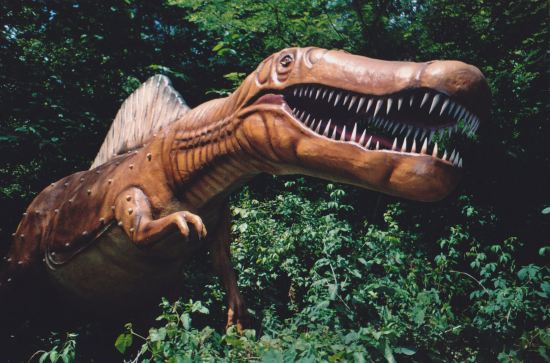 The dimetrodon is still bitter that the spinosaurus got to be the Big Bad in a movie before he did. He can be fierce, too. This is his angry face!

Brontosaurus, apatosaurus, and diplodocus ride off into the sunset, laughing because no one’s noticed that they swapped name tags years ago. 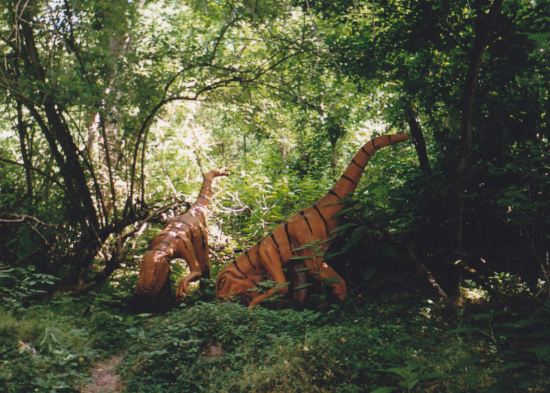 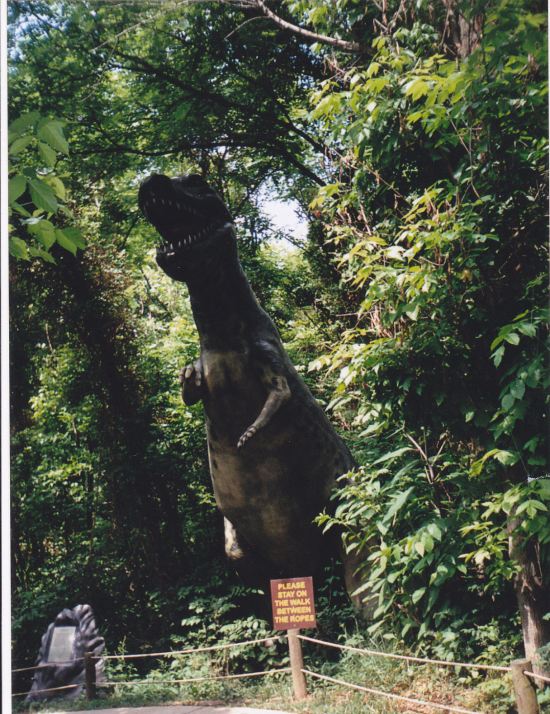 An accurate depiction of how some dinosaurs were terrible at ambushing.

Leperaptors in search of a healing Messiah. 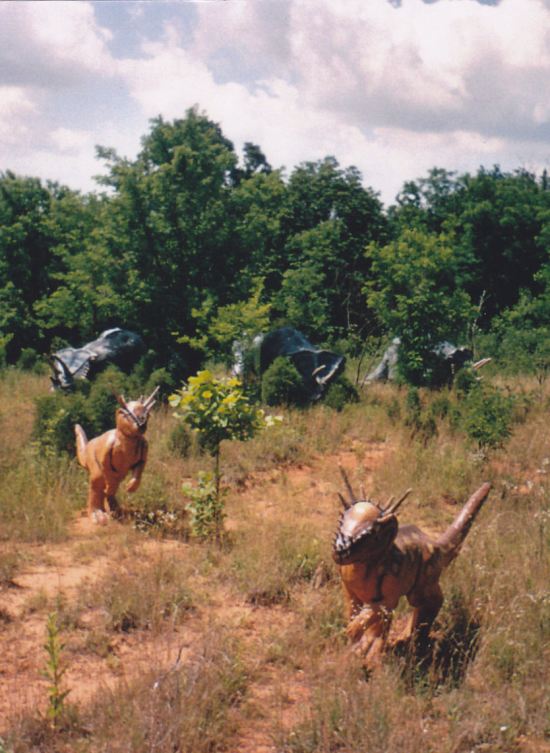 Reminder why we’re here: my son could pronounce “pachycephalosaurus” before he started kindergarten.

This lurking horned T-Rex pops in for a brief cameo foreshadowing his next appearance in Dinosaur World 2: Cretaceous Boogaloo.

Real fossils were also on display in a spartan mini-warehouse sequestered from the cartoon simulacra. A movie shack played a DVD of the BBC miniseries Walking with Dinosaurs with state-of-the-art 1990s visual effects. Copies of said DVD were on sale in the gift shop, which specialized in dinosaur memorabilia, remaindered dinosaur educational materials, and cheap dinosaur toys that were probably donations from the local K-Mart clearance racks. 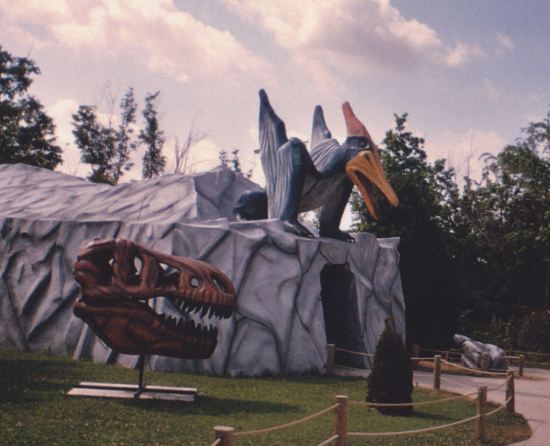 Before entering the hall of learning, first you must defeat these guardians. Especially keep your eye on that shifty-looking bush.

In case you brought a kid to Dinosaur World without explaining why they should care about the whole “dinosaur” concept, this handy series of displays picked up where your spotty parenting left off. 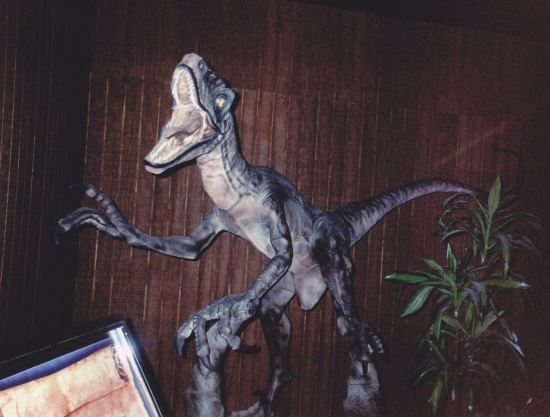 Indoor velociraptor insists he’s scary even though he’s not out basking in the sun with his peers. Maybe he has a prehistoric skin condition.

And of course there’s a dino-themed playground, which is easy to commandeer if you arrive early in the day before children show up. 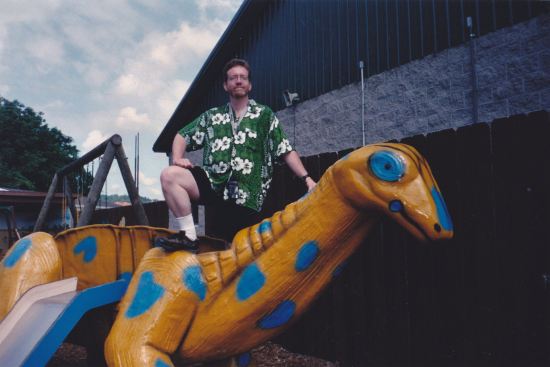 I hereby claim this wacky dino-slide in the name of the great state of Indiana. Let the new taxation begin forthwith. 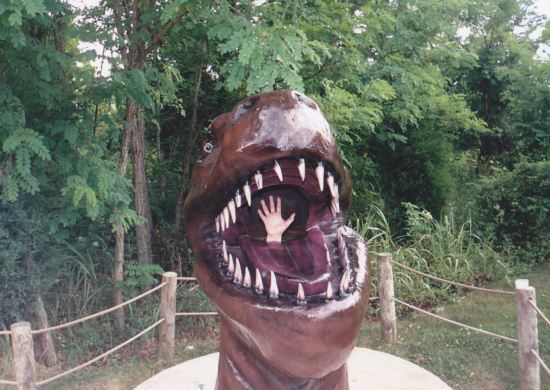 Ever wonder what it would be like watching your child devoured by a Jurassic Park fugitive? Yep, there’s a dramatization area for that.

Before leaving town, we stopped briefly at the site of another former roadside attraction, the Golgotha Golf Course. Formerly a miniature golf course with evangelical-themed obstacles — apropos of the crucifixion, it’s located atop a steep hill — it shut down years ago, but you can park near the entrance and decide for yourself whether or not to trespass beyond the chain and sneak a peek into the rumored abandoned decor. I wavered half a second, but chickened out when I saw a police car drive by a few stories below. This was no time to get embroiled in an I Love Lucy episode come to life.

As an alternative act of rebellion, we figured out where we could park and pose with one of their roadside dinos. For a few brief moments, we too were sideshow shills.