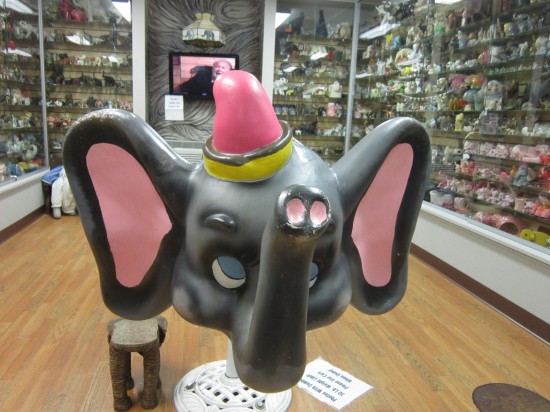 Dumbo may be among the more high-profile pachyderms, but he’s not the only one out there pounding the pavement for peanuts.

We left the Gettysburg Battlefield area after a late lunch and were heading northwest when, barely a mile down the road, we pulled over for our next diversion. In a complete change of pace from solemn reminders of our bloodied American history, we perused a unique little establishment, a seller of myriad sugary snacks that boasts an assortment of over twelve thousand elephants. Because they can.

Ms. Penny Candy is merely the herald of many, many elephants waiting in your near future.

Mister Ed’s Elephant Museum and Candy Emporium began in 1975 as an ordinary general store. As time passed, founder and former grocery manager Ed Gotwalt tweaked his merchandise offerings, shifted his focus, and decided there should be lots and lots and lots and lots of elephants. Thus was one man’s dream born and brought to fruition. Mister Ed and his wife retired years ago, but passed on the legacy to their granddaughter and her husband, who together keep the elephantine dream alive.

Hence: elephants. You can’t possibly miss the place as you’re driving down the highway, what with all the elephants on the lawn.

The animatronic Miss Ellie Funt is among the louder specimens welcoming you to Mister Ed’s peculiar front yard. 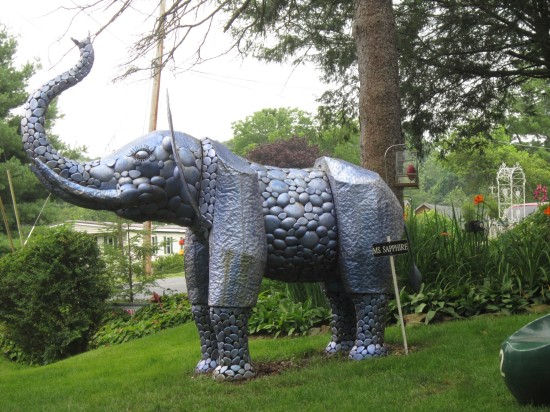 Ms. Sapphire understands if you can’t help staring at her cobblestones. 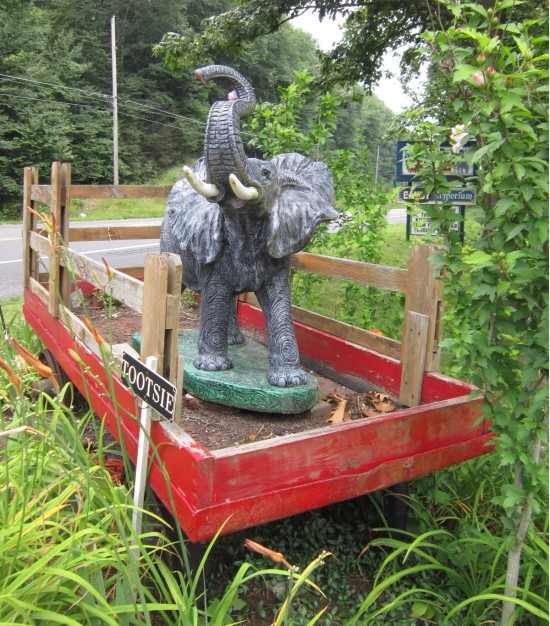 Not sure if this wagon is Tootsie’s favorite place to be or it’s how you punish a bad pygmy elephant instead of telling them to go stand in the corner.

Elephants do love their garden parties, as you do. 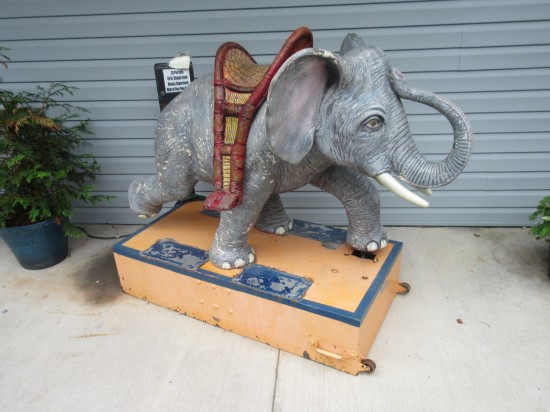 We have no idea if this elephant ride worked. It’s not quite our size or speed. 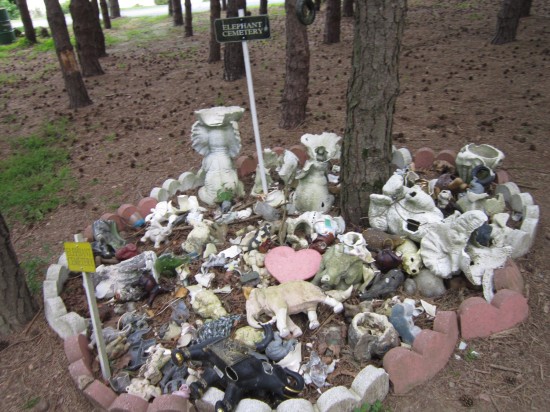 Mister Ed did it! He located the legendary elephant graveyard! It’s no Atlantis, but you’d think he would deserve some press for this major find.

The outdoor elephants aren’t alone. All around the premises are additional non-elephant statues, decorations, knickknacks, lost objects, junk nailed to trees, stuff that isn’t quite trash but may not aspire to art. Around the house, in the backyard, and all through the adjacent copse are eye-catching bits of randomness, glued to walls or tossed in bushes, floating somewhere in the vast gray area between the realm of kitsch and the sin of littering.

I didn’t have the nerve to ask this Norwegian ghost knight about the story behind the saddle that may or may not be atop an invisible steed.

Stairway to Nowhere delivers nothing less than what it advertises.

Until some other entrepreneur has the audacity to open a competing giraffe museum, these wayward loiterers have nowhere else to go. 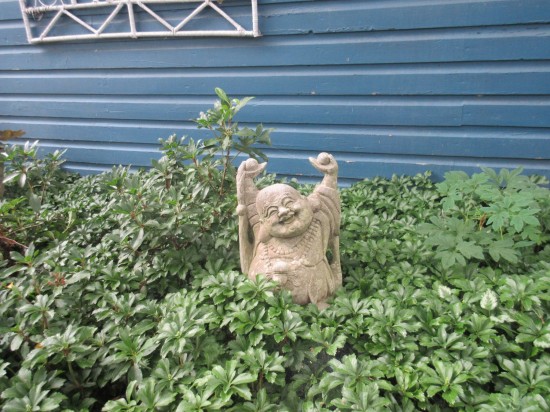 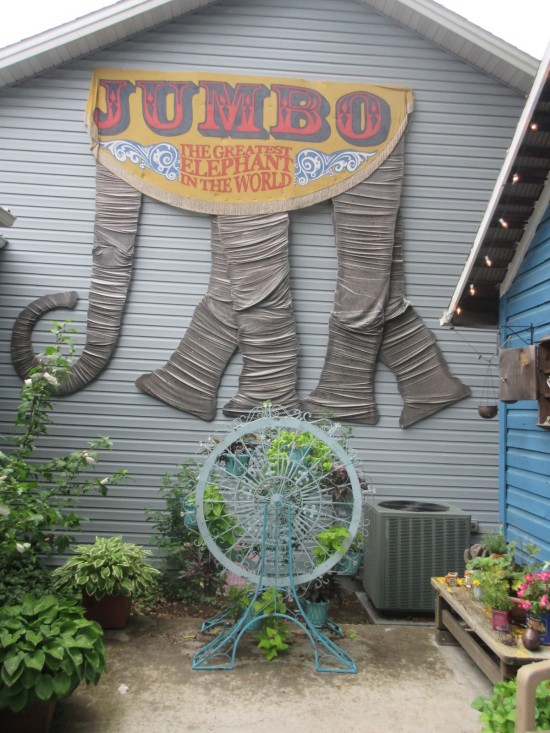 The backyard contains an overflow of oddities as well as the works of a skilled gardener. 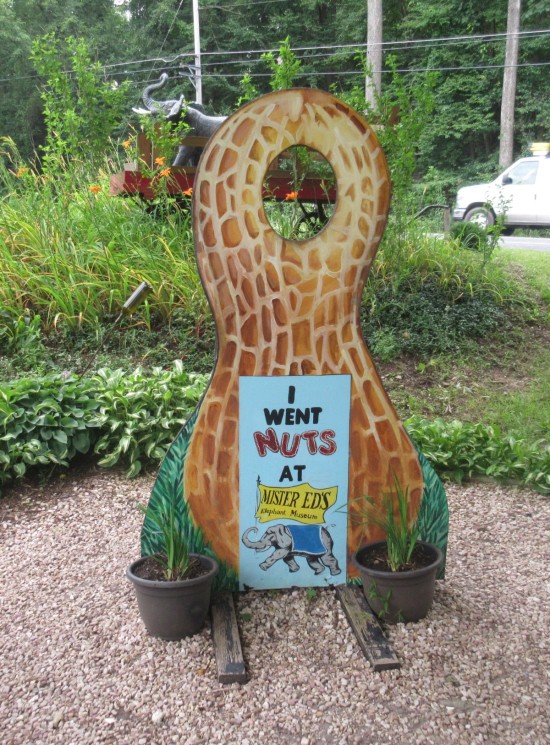 Inside Mister Ed’s is the heart of the dream — his thundering herd, his non-traveling super-circus, his vast collection of elephants of all shapes, sizes, nationalities, media, and occupations.

The “Elephant on the Shelf” never caught on as a fad anywhere except at Mister Ed’s, though it sure beats at least one other Christmas fad I can think of.

Of course Ganesh is there to bless his legions.

Not all the elephants are behind glass, but that doesn’t mean it’s cool to touch them. 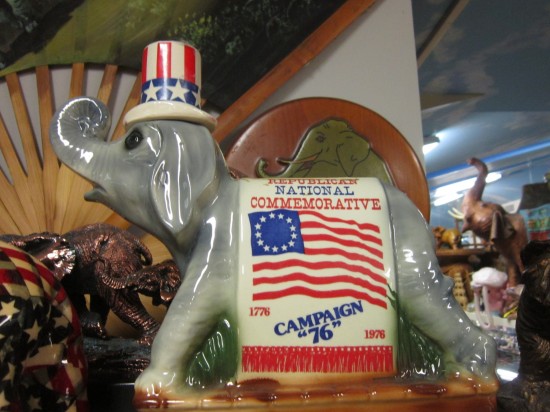 Elephants may be known for their memories, but sometimes they can be shortsighted, like in 1976 when they were so sure it would be Gerald Ford’s time to shine.

Every collection has its first. For Mister Ed it was this mere trinket, a wedding gift whose giver knew not what they would beget.

A 2010 fire was one of the museum’s worst days ever. Over 2000 elephant casualties were a cruel blow, but the generosity of numerous fans and donors worldwide helped Mister Ed rebuild and come back stronger than ever, elephant-wise. This wicker wonder was among the original survivors.

There’s more to Mister Ed’s than elephants, though that’s a proud accomplishment in itself. Mister Ed’s quirky institution has afforded him the opportunity to travel and meet high-profile folks throughout the course of his career. A wall of photographs captures Mister Ed’s momentous encounters with the likes of Whoopi Goldberg, Robin Williams, Kathleen Turner, Mad Men‘s Kevin Rahm, Curtis “Booger” Armstrong, and — of note to longtime MCC followers — former Bunheads star Sutton Foster. For that alone, Mister Ed has earned my heartfelt envy.

For local kids and passing motorists, Mister Ed’s also carries over 700 varieties of candy, including many old-fashioned brands you can’t find at Walmart or your favorite gas station. Marvel at the extra-large exhibit pieces as you walk around, but don’t forget to stock up on supplies for the rest of your road trip.

Pez dispensers! Attentive MCC readers might remember them from such previous stops as the American Visionary Art Museum and Geppi’s Entertainment Museum! 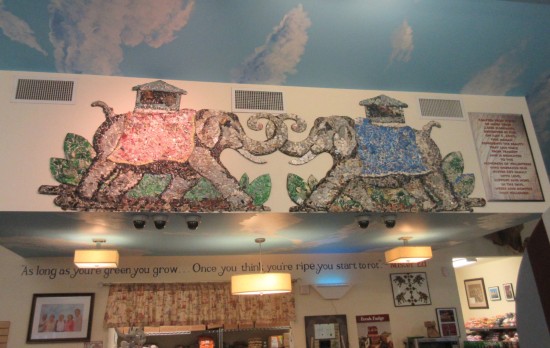 Elephant mural above the counter where helpful staff carve up fresh fudge and other delights.

Who knew that our chance encounter with Santa Claus would actually be shared here on MCC just in time for Christmas? Clearly Santa was thinking three steps ahead.

Their big centerpiece, a dynamic diorama in which one heroic elephant takes on its natural predator, a bunch of candy-hating snakes.

I wish I could say we bought a trash bag full of candies to take with us, but the truth is we had no cooler with us and no safe way to transport so much perishable product. We still had leftovers from Vaccaro’s in Baltimore that thankfully hadn’t melted inside our luggage and trunk yet. We refused to leave empty-handed, but we had to keep it modest. Choosing from their extensive selection of flavored fudges, I picked up some root beer fudge, while Anne went experimental with some watermelon fudge. Because watermelon fudge, like a herd of 12,000 elephants, isn’t something you see everyday.