A grimdark timeline in which the only survivor of X-Men: Apocalypse was Cyclops.

Everyone loves crossovers! Who doesn’t get excited every time two to 10,000 pop culture characters of varying degrees of familiarity get stuffed into the same frames or panels and generate mechanical synergy for the amusement of fans and the enrichment of corporations? As a young teen collector of both Marvel and DC Comics I was bedazzled by the one-two punch of Secret Wars and Crisis on Infinite Earths, each of which tossed piles of IPs into dogpiles and let them take turns teaming up and punching each other into oblivion. This brilliant concept in apocalyptic storytelling wowed me at the time, but began losing steam over the decades as all the other annual Marvel and DC crossover events kept (and keep) producing diminishing returns for increasingly transparent financial cravings. Meanwhile in other media, we had the innovative novelty of Who Framed Roger Rabbit? and mash-ups like Kingdom Hearts, Soul Calibur, and Super Smash Bros. We had obscurities like Cartoon All-Stars to the Rescue, while the previous generation arguably had their own predecessor in It’s a Mad, Mad, Mad, Mad World.

Despite the amount of behind-the-scenes wrangling involved, the method is simple: pick lots of famous faces that each have had tons of stories and years of character development dedicated to them, cultivated by their creators and successors with some combination of time and care; strip away everything from them but their outer shell and a one-line descriptor of their most superficial traits; throw everyone into an arbitrary arena; make them fight and fight and fight; then, profit. Hurray! It’s a crossover!

To those who love crossovers and other spectacles a la Battle of the Network Stars, by all means keep loving what you love. After a couple decades or more of them, they’re not an automatic draw for me.

And don’t get me started on the crossover’s close cousin, the whole “Easter egg” fetish that’s become a mandatory element of every geek-related product ever, to the point that viewers spend so much time expecting recognizable tokens and high-fiving each other for spotting them that they become the point of purchase and the only reason to pay attention. Some works are so oversaturated with Easter eggs, they’re less like a narrative and more like an extended Highlight for Children “Hidden Pictures” puzzle.

That brings us to Steven Spielberg’s Ready Player One, adapting the novel by Ernest Cline that I couldn’t bring myself to touch after reading a lacerating review of its nostalgic self-indulgence that gave me more than enough signifiers to tell me it was Not My Thing. As if that weren’t enough, someone on Twitter (I wish I could remember who or in which recent month) shared numerous excerpts from the novel that confirmed it’s entirelty about the hero name-checking, listing, and pumping himself up with his never-ending stream of collector callback consciousness. Unless someone wants to pay me to bypass my gut reaction, count me among the viewers who saw the movie but didn’t and won’t read the book.

Frankly, I only saw the movie because I knew friends or family would ask me about it. In their defense and to my surprise, I’ll give them this: Ready Player One was a lot less anathematic to me than The Big Bang Theory.

END_OF_DOCUMENT_TOKEN_TO_BE_REPLACED

Previously on Midlife Crisis Crossover: we saw Rogue One: A Star Wars Story, the #1 movie in America! The previous entry was the requisite MCC review-not-review, but light on key developments and movements for the benefit of those fans hoping to see the movie with as few surprises spoiled as possible. The internet doesn’t seem to be trying as hard to ruin Rogue One as it did with The Force Awakens, but a few hyper, well-intentioned fans jumped the gun a little on the assumption that every “real” Star Wars fan would’ve attended a showing within twelve hours of release.

We had thoughts, some of which I remembered to write down before they faded. Here’s a COURTESY SPOILER WARNING in case you somehow overlooked the title.

END_OF_DOCUMENT_TOKEN_TO_BE_REPLACED

Of all twenty-six pilots in this series, I had more mixed emotions about The Flash in advance than I did any of the rest. When I began collecting comics at age six, Barry Allen was one of the first heroes to teach me about truth, justice, and sequential numbering in long-running comics. I still have issues #270-350, along with the first 200+ issues of Wally West’s subsequent series (including the weirdly numbered Zero Hour and DC One Million crossovers). The first time he came to TV in 1990, I’d taped nearly every episode on VHS years before DVD was a thing, and when it became a thing and the show was eventually granted its release, finally getting to see the legendarily preempted Captain Cold episode was, pardon the expression, pretty cool. Until several years ago, I was a longtime fan of the Flash legacy.

I entered with trepidation into his new vehicle produced by The CW, purveyors of the frequently aggravating Smallville, which left me with so many negative emotions that to this day I still haven’t convinced myself to try a single episode of Arrow because I assumed the results would be similar or worse. (I haven’t forgotten Birds of Prey, either. Yikes.) Knowing that The Flash was a direct spinoff from a show I’m not watching didn’t encourage me, nor did the announcement that both shows are already planning their first crossover (ugh). Insert obligatory reference here to other problems with translating DC heroes to other media, especially movies.

But it’s on the list. So I gave it a try. And I was happy to be surprised. (Fair warning to anyone who hasn’t seen it yet: one paragraph in this entry covers the specific subject of Easter eggs. If you’re a fan of those and plan to savor them as a surprise someday, consider this your courtesy spoiler warning.)

END_OF_DOCUMENT_TOKEN_TO_BE_REPLACED 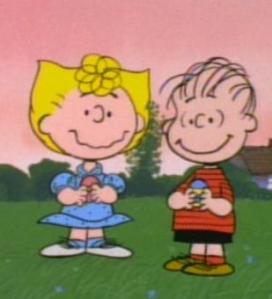 Sally and Linus, humbly accepting food from a dog.

When I was a kid growing up in a household where God and church were never discussed, Easter meant next to nothing.

I was brought up to observe the standard annual rites. We bought a Paas egg-coloring kit at the grocery that came with all the paraphernalia you needed for starters: color-coded aspirin to toss in cups of water and turn it Crayola-colored and undrinkable; a wire hook to rescue submerged eggs from their watery prisons after a dozen tries; non-stick stickers, most of which would later be thrown away still attached to their original release paper; a wax crayon for drawing gunky, invisible shapes on the eggshell for no one to see and the dye to soak through anyway; decorative paper collars to use as Easter egg stands, as if the results would be museum-worthy; and the box that contained it all, designed with the punch-out holes to transform into an egg-drying rack that would collapse under the weight of three or more eggs.

END_OF_DOCUMENT_TOKEN_TO_BE_REPLACED

In this day and age where moviegoers can wait until the home-video release before watching a movie multiple times, how often are we willing to devote extra time and money to encore presentations of a theatrical release? The case agreeing to my second showing of Wreck-It Ralph tonight consisted of two winning bullet points:

1. My son and I really, really liked it the first time we saw it. This is the first year for new Pixar and Disney Animated releases in which we liked the Disney film better.

I had hoped to catch more details and Easter eggs this time around. Regretfully, I am old and the film’s background characters are spry. We managed to see a few items we missed the first time around: the other three Pac-Man ghosts; a mounted ostrich from Joust; the resemblance of the TurboTime cabinet design to that of Rally-X; and graffiti on a wall reading “Aerith Lives”. That list is too short. I’d also hoped to catch additional Easter eggs and overlooked scenes more to my liking, including but not limited to:

* The monsters from Rampage standing on a street corner outside the Niceland apartments, just staring and drooling.

* A traffic jam outside the terminal whose gridlocked commuters include the Moon Patrol rover, the OutRun Ferrari, an Armor Attack polygonal tank, an ExciteBike, and Nathan Drake in a Jeep. All sport the same license plate: “RIP G4”.

* A Grand Theft Auto thug being arrested by Mappy.

* A terminal convenience shop run by a Moogle and selling movies on DVD with titles such as Citizen Liu Kang, Disney’s Knights of the Old Republic, Wolfenstein 3D in 3D, and Galaga vs. Gyruss.

* A sidekick barbershop quartet with Clank, Daxter, Sparx, and Luigi.

* Pac-Man throwing a fit at Felix’s party because all the snacks are fruits, and for decades he’s been dying to have just one lousy steak.

* An inter-game prison populated with Leisure-Suit Larry, PaRappa the Rapper, and E.T. the Extra-Terrestrial.

* A political-activist poster advocating a unilateral ban on all Minesweeper mines.

…but I guess that’s what cutting room floors are for. Those, and the dreams of over-the-hill gamers who can imagine a film with three times the budget and none of the legal hassles.

Important things first: Wreck-It Ralph is the best non-Pixar Disney film in years, proof positive that both divisions are up to the task of delivering solid results when the right talents are lined up and the marketing department is kept in check. The end credits confirm Ralph was wrangled by four different writers, two of which are omitted by IMDB — Jim Reardon and director Rich Moore, both veterans of the glory days of The Simpsons. (Of the other two, one, Phil Johnston, was responsible for last year’s indie Midwest comedy Cedar Rapids.) From where I sat, I couldn’t see the seams.

Academy Award nominee John C. Reilly is an unloved palooka who chafes in his day job as the villain of Fix-It Felix, Jr., one of several old-school cabinet games at Litwak’s Family Fun Center (elderly owner voiced by Ed O’Neill). Ralph’s major beef isn’t necessarily that he hates his job, but that he hates how shabbily he’s treated because he does it so convincingly. Even when Litwak’s is closed and all gaming characters are allowed to go home for the night, Ralph’s coworkers — the titular hero Felix (30 Rock‘s Jack McBrayer) and the townspeople he saves every day — relax and party in their high-rise apartment building while poor Ralph is forced to live and sleep outside on a mound of loose bricks. Perversely, in their neighborhood Ralph is the 1% and the well-to-do are the 99%. The manufacturer clearly didn’t program these civilians to recognize the sight of homelessness.