Bloggers love writing prompts. Toss them a random topic, see what they can do with it, cross your fingers and wish them the best on their mental exercise. I don’t mind them myself, sometimes. If there’s a subject on which I have even the most tangential thought, in many cases I can find something creative and/or catchy to do with it, provided there’s no vital scheduling needs involved.

Speaking of which: I have a commitment to fulfill and a project I said I’d finish.

END_OF_DOCUMENT_TOKEN_TO_BE_REPLACED

I haven’t forgotten about this very special project, but I had a certain viewing/posting order in mind that would’ve put some thematic coupling to these entries. That plan was derailed when two of the pilots on the master list were not available for viewing On Demand, my primary source of after-airing catch-up. I’m in the process of making special arrangements to see those two without resorting to pirating or (ugh) buying them on iTunes. That leaves me with two pilots I’ve watched in the past month that share absolutely nothing in common except that I haven’t covered them yet. Maybe this works if we all agree to pretend Jane the Virgin and Mike Tyson are mismatched buddy-cops who have to get along for the sake of their jobs, and that there are high stakes and…I don’t even know how to finish this sentence in any remotely entertaining manner. The two series are like comparing apples and Edsels. I give.

END_OF_DOCUMENT_TOKEN_TO_BE_REPLACED 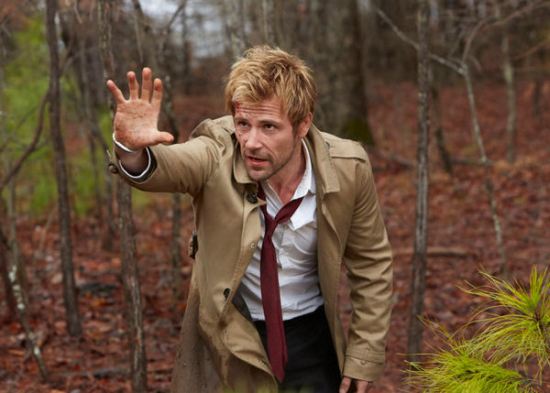 It’s time for more comic book TV! Longtime readers know John Constantine from his first appearance as an obnoxious Swamp Thing ally and/or as the star of his own mature-readers DC/Vertigo series that ran for 25 years before it was canceled and replaced by a more mainstream version ready-made for super-hero crossovers. Too many movie viewers first knew him as the focus of just another failed Keanu Reeves vehicle, whose high point was Tilda Swinton as a creepy angel. The new John in NBC’s Constantine is basically Dr. Strange on zero hours’ sleep wearing Harvey Bullock’s clothes. Regardless, the cunning yet selfish antihero has been handled by so many great writers over the decades, shown in so many states of mind operating in so many peculiar ways, that this pilot had no chance of pleasing all the people all of the time.

END_OF_DOCUMENT_TOKEN_TO_BE_REPLACED

A long time ago in a galaxy far, far away…the Keystone Kops were alive and well and still wearing useless helmets.

Star Wars Rebels is the first of two animated pilots on the project list, and one of the very few that my wife and I had planned to try anyway. She’s a longtime dedicated Star Wars fan with an Expanded Universe emphasis, as are some of my oldest internet cohorts. Together we watched nearly every episode of Star Wars: The Clone Wars until its abrupt cancellation. We number among the many thousands of fans waiting impatiently and vainly for closure on the life of former Jedi Padawan Ahsoka Tano. Regardless, we’d look and feel weirder if we didn’t give the new show a try.

Far as I can tell, nearly everyone who’ll love any media product with the words “Star Wars” on it has given the show an A for existing. So far to me, it’s Firefly for kids. There’s some good and some less-good in that.

END_OF_DOCUMENT_TOKEN_TO_BE_REPLACED

Of all twenty-six pilots in this series, I had more mixed emotions about The Flash in advance than I did any of the rest. When I began collecting comics at age six, Barry Allen was one of the first heroes to teach me about truth, justice, and sequential numbering in long-running comics. I still have issues #270-350, along with the first 200+ issues of Wally West’s subsequent series (including the weirdly numbered Zero Hour and DC One Million crossovers). The first time he came to TV in 1990, I’d taped nearly every episode on VHS years before DVD was a thing, and when it became a thing and the show was eventually granted its release, finally getting to see the legendarily preempted Captain Cold episode was, pardon the expression, pretty cool. Until several years ago, I was a longtime fan of the Flash legacy.

I entered with trepidation into his new vehicle produced by The CW, purveyors of the frequently aggravating Smallville, which left me with so many negative emotions that to this day I still haven’t convinced myself to try a single episode of Arrow because I assumed the results would be similar or worse. (I haven’t forgotten Birds of Prey, either. Yikes.) Knowing that The Flash was a direct spinoff from a show I’m not watching didn’t encourage me, nor did the announcement that both shows are already planning their first crossover (ugh). Insert obligatory reference here to other problems with translating DC heroes to other media, especially movies.

But it’s on the list. So I gave it a try. And I was happy to be surprised. (Fair warning to anyone who hasn’t seen it yet: one paragraph in this entry covers the specific subject of Easter eggs. If you’re a fan of those and plan to savor them as a surprise someday, consider this your courtesy spoiler warning.)

END_OF_DOCUMENT_TOKEN_TO_BE_REPLACED

Don’t look at me for a caption. They got this covered.

In this corner, a onetime almost-movie star who has his own Food Network show! In that corner: a former SNL writer with some standup comedy experience! These two sitcoms have almost nothing in common, not even their ratings. I watched the pilots for both a while back and procrastinated doing anything with my notes…until now.

END_OF_DOCUMENT_TOKEN_TO_BE_REPLACED

Like Loading...
October 9, 2014 By Randall A. Golden in Meta, TV/DVD Tags: Alfred Enoch, David Tennant, entertainment, Gracepoint, How to Get Away with Murder, pilot, reviews, Stalker, television, Viola Davis 7 Comments

Our Heroes prepped for their roles by attending a seminar on “Surviving an American Remake of a European Series” and then reading viewer complaints about The Killing.

I’m combining three entries in one for simple bookkeeping reasons. See, some MCC entries get Likes from fellow WordPress users. Some MCC entries see an uptick in site traffic. Some rare MCC specimens are blessed enough to garner both. Up to this point most of the MCC 2014 Pilot Binge entries have been earning neither. Even spammerbot accounts are looking at them and thinking, “This no good! We go spam other bloggers! You call when you go back to posting photos! THEN we link you to counterfeit Louboutins long time!”

I refuse to quit the project because that’s the kind of mule-headed fool I am, even if means more TV viewing discomfort. A few pilots may still merit individual entries in the future, but I’ve received the message loud and clear that not every impression I have is worth 700-1,000 words. It doesn’t help that my tastes are sometimes confounding and governed by peculiar guidelines. Regardless, we’ll see what we can do with this silent input and go from there.

And now, a few words on three pilots about MURDER.

END_OF_DOCUMENT_TOKEN_TO_BE_REPLACED

In case the title Bad Judge was a little too shorthand and didn’t prepare you, the pilot is quick to give you everything you need to know to form your own snap judgment and recuse your TV from the rest of the proceedings. I assume it owes some gratitude and royalties to either Bad Teacher or Bad Santa, but I really wouldn’t know and intend to stay ignorant of all such likenesses.

Before I continue, I suppose I could add a courtesy spoiler alert for anyone who’s saving this mistrial on their DVR for a rainy, thundering, frog-pouring kind of day. The element of surprise certainly didn’t help me out.

END_OF_DOCUMENT_TOKEN_TO_BE_REPLACED

“So, while we’re trapped on this boat and there’s nowhere you can hide, and no other ABC show you can run to…wanna make out in front of the crew?”

END_OF_DOCUMENT_TOKEN_TO_BE_REPLACED

I’d never seen a single episode of any previous NCIS products, but I was bound to encounter one sooner or later. In the fine tradition of Law & Order: Trial by Jury and CSI: New York and Here’s Lucy, NCIS: New Orleans is the third in the dynasty and presumably goes through the same motions as its predecessors, except with differently likeable actors and, I’m guessing based on location, a whole lot more local color, by which I mean the kind of Southern accents Hollywood flat-out dislikes. In most movies and TV shows, anyone with a Southern accent is evil, stupid, both, or Academy Award Winners Reese Witherspoon and Matthew McConaughey. Our NCIS:NO Heroes are appreciably none of the above, though I confess Louisiana is one of several states my wife and I haven’t road-tripped to yet, so I have no idea if there’s a single authentic Cajun, Creole, French-American, or Mardi Gras partygoer in the entire bunch.