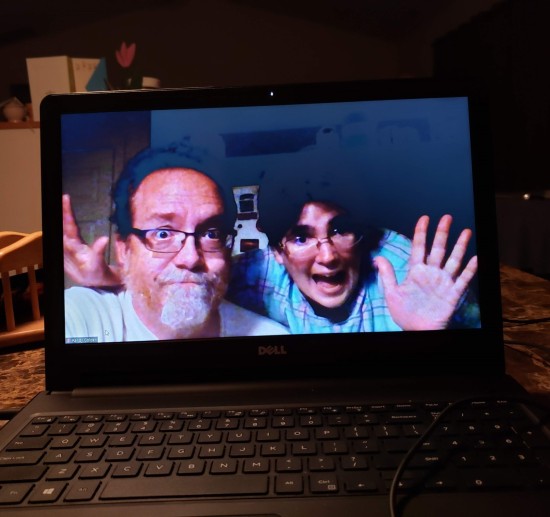 October 4th: Anne and me testing Zoom while waiting for her siblings to log on for our weekly group chat.

Welcome to the ninth annual Midlife Crisis Crossover year-in-review. This virtual cubicle was slapped together on April 28, 2012, as a place where I could entertain myself by making essay-shaped things out of whatever words and pictures I had at hand, as opposed to surfing social media and hoping all those wandering strangers might make for sufficiently provocative brain engagement. Often it’s been a fulfilling platform to share galleries, memories, Grandpa Simpson-style rambling jags, and peculiar opinions that might otherwise either languish unwritten in my head or collect endless rejection emails from every professional website ever. At other times it’s been less satisfying, but I keep whiling away at one of my most time-consuming hobbies anyway. When my head is in the right space, I still enjoy the process in and of itself. Often I still enjoy the results. On rarer occasions, I’m also privileged and honored to enjoy any and every external response received from outside my own head.

July 20th: the remnants of a local house that caught fire. The family was unharmed, but one pet went missing after its escape.

Do I need to belabor it? Do I have to belabor it? As if every internet writer who can string together more words than photos in a row hasn’t already cranked out their own regretful thinkpieces about The Year That Tried to Murder Us All, watching Netflix’s perfunctory seriocomic Death to 2020 retrospective hammered home the message that for much of 2020, the only topic a lot of folks had to write about was the self-contained disaster zone that was 2020 itself, myself included. Our usually lively convention schedule was burned to the ground. My excessive reviews of every film I see in theaters effectively went on hiatus due to fearing for my life. Our annual road trip still happened, but on an understandably smaller and quainter scale. It’s hard to stand out from a crowd when life has mashed us down into a grey morass whose cries blend into one indistinguishable dull roar.

Or as Buffy Summers more eloquently put it in the episode “Earshot”: “My life happens on occasion to suck beyond the telling of it. Sometimes more than I can handle. And it’s not just mine. Every single person down there is ignoring your pain because they’re too busy with their own. The beautiful ones. The popular ones. The guys that pick on you. Everyone. If you could hear what they were feeling. The loneliness. The confusion. It looks quiet down there. It’s not. It’s deafening.”

MCC had its own little successes from a perspective of downscaled expectations. In 2020 I posted 141 new entries, less than usual as part of a conscious effort to adjust supply closer to demand. Since I have no books to sell and no claim to media personality, a site whose primary focus is “whatever preoccupies this one dude at any given time” will remain a tiny boutique. And yet, traffic was up 11.0% over 2019, our first verifiable increase since 2017. Maybe I should do nothing interesting more often.

As is the annual tradition, my inner stats junkie compels me to share the annual MCC charts and countdowns, plus a selection of random 2020 photos never before shared here until today. Enjoy!

May 26th: A friend bought himself a life-size Baby Yoda. Because he could.

2020 POSTS WITH THE MOST OVERALL CUMULATIVE HITS:

A blog that bounces back and forth between entertainment reviews and personal travelogues is doomed to divide the audience in half — not necessarily equal halves — and take turns alienating both. The travelogues are a personal pleasure, but the reviews drive more long-term traffic, especially if I watch anything that had scenes after the end credits. I understand there’s an app for that now but couldn’t tell you what it’s called because I’ve never looked into it. Anne and I do all our own credits-watching, and I’m always happy to share the results.

But the year’s runaway hit was The Crown, a juggernaut that kept MCC’s dashboard hopping for months. The fervor eased up after season 4 dropped and faded out of public consciousness, but the weeks leading up to its premiere saw a frenzy of viewers looking up the grade-A Netflix series and happening upon my mildly ignorant springtime listicle. None of them left replies or actually shared the entry with anyone, but at least they showed up.

Streaming media turned into an ongoing 2020 highlight because it was nearly the only thing any of us could do with ourselves. My sneak preview of NBC/Universal’s new Peacock service — a sort-of boon granted freely to all us old-fashioned Comcast subscribers — drew eyes merely because I was the first user to figure out how to turn on its ineptly designed closed-captioning. At long last I benefited from growing up a reasonably adaptable layman.

August 7th: A game of Apples to Apples turns unintentionally saddening at a small gathering. Weeks later, two of those present would later test positive for COVID-19. We dodged a bullet and I have been freaked out about it ever since because if the timing had gone differently…

BACK-CATALOG POSTS WITH THE MOST HITS IN 2020:

Search engine users never watch end credits but suffer from the heartbreak of FOMO. Search engine users also love lists. One day I shall shamelessly compile a 10 Best End-Credits Scenes Ever entry and retire a millionaire. Maybe then I’ll have the clout and confidence to write a book about something.

I’m quiet. Our readers are quiet. It’s an awkward combination. MCC salutes our one (1) 2020 power user out there who graced several entries with his feedback and pro bono proofreading results and assured me that yes, this microphone is turned on. Thank you, Reuven. I mean that.

December 25th: Anne dressed to the nines as we headed out for a bit of driveway Christmas present swapping and brief caroling.

With The Crown season 5 pushed back to 2022, I don’t know what I’m going to do to accidentally harvest clicks in 2021. Anne and I are about to dive in to all six hundred episodes of Star Wars: Rebels, so maybe I can somehow farm moisture from those.

July 7th: A pair of murals was an outtake from our visit to George Rogers Clark National Historical Park in Vincennes.

MOST “LIKED” POSTS BY OTHER WORDPRESS USERS IN 2020:

Fellow WordPress bloggers hate modern entertainment, but they love travel and they super-love food. Despite its modest scope, our annual road-trip miniseries had its fans…for a while. Same things happens every year, though: once the photo galleries are complete, theirs stats sink like a rock never to resurface. About once or twice a year, a troll will drunkenly fall into the comments section of a years-old chapter and mock me for something I barely recall and can’t be bothered to squabble over. I like to imagine their home life is an infernal abyss and insulting strangers is how they cry for help. But hey, at least they’re commenting.

June 21st: Geese befouling the retention pond along one of our weekend walks around the neighborhood.

It’s not always illuminating to examine my failures as judged by You, The Viewers at Home, but it’s a thing I do anyway. Every 2020 entry received at least two Likes, but for four sad entries, two was the best they could drum up. Even bots and spammers couldn’t be bothered to smash the button and at least feign validating me for these apparent turkeys:

Curiously, all four of those were posted in the first half of the year. After our vacation ended, the WordPress Like supply stabilized and there seemed to be more to go around. Just like ground beef and toilet paper.

These annual countdowns used to include a list of Posts With the Least Overall Cumulative Hits, but I’ve jettisoned that category because I just realized the blog dashboard cuts off year-to-date stats for single entries below a certain threshold. A list of “least trafficked posts that at least met the arbitrary data-keeping threshold” is useless. 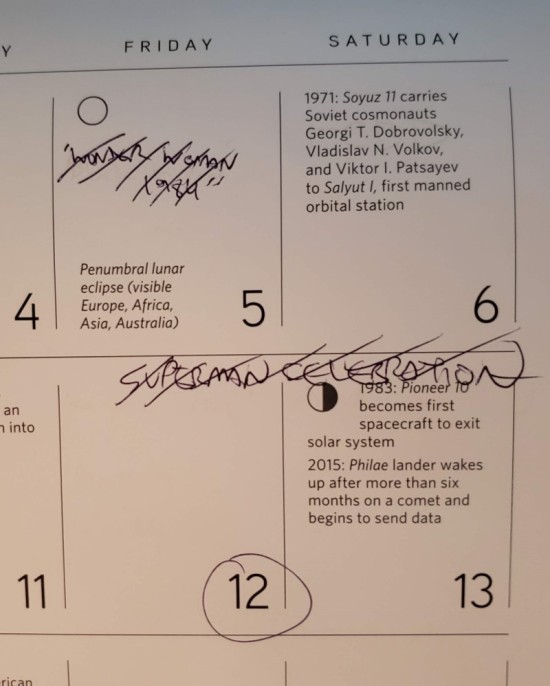 June 1st: Excerpt from our marred 2020 wall calendar for the first two weekends of June.

Up until 2020 we’d been attending so many cons each year that I would list all of them in our year-in-review summaries for fun and reference. It was a nice way to end the entry on a light-hearted note. As it happens, fellow fans and a handful of celebrities caught us at the following events in 2020:

Technically we could have attended C2E2 at the end of February before America began falling apart, but (a) hints of the collapse were already emerging at that point and unnerving us a bit, (b) we were still dealing with the lingering debts from our numerous 2019 experiences, (c) wintertime in Chicago is not our idea of a good time and nobody wants to trudge around a convention center in a heavy coat unless they’re cosplaying Kurt Russell in The Thing, and (d) for our personal tastes and want lists, nobody on the guest list was a temptation. By March the pandemic was in full swing and our wall calendar for the next ten months had lots of ugly cancellation crosshatching penned all over it.

For 2021 we’ve penciled in a number of shows whose runners are fantasizing about their big comebacks. Hopefully we don’t have to deface our 2021 wall calendar, too.

Notice what hardly showed up on any of these charts: my numerous entries about the pandemic. Fear and dread crept in far more often than I would’ve liked, sometimes in focused entries and sometimes as a recurring motif — particularly in the road-trip series as we gallivanted through a series of Indiana counties with wanderlust and trepidation in equal measure. I wrote what affected me as honestly as I could, sometimes to the point of depression, but the net scorecards show the journals of our plague year were largely inessential reading. So it goes.

But hey! 2021 is here! We’re not dead yet. We’re not testing positive yet. We’re heavier and wider and nowhere near calm, but we’re still here and still looking for happier experiences, still praying for peaceful and effective solutions to the endless woes, and still hoping to get more than 100 miles away from home someday if it be within the Lord’s will. If we could also start hugging other family members again someday, that’d be awesome.

If you reached the end of this entry 2,600 words later without scrolling, which is cheating: thanks for reading! Here’s hoping your 2021 exceeds expectations, even if you’re not a fan of The Crown. Cheers!

November 27th: the replacement for that same house now under construction after the fire. Lord willing, may 2021 usher in new comfort and possibilities for one and all.