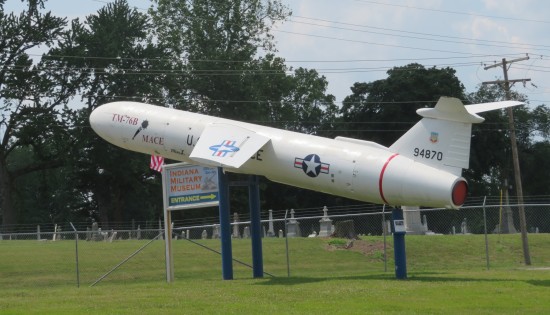 A TM-76B Mace cruise missile, previously stored at Air Force bases in Warner Robins and Orlando, welcomes you to the Indiana Military Museum!

I consider myself generally antiwar, but when faced with collections of giant machines larger than cars, some part of my brain interprets them not as armed conflict tools or purveyors of bloody destruction, but as really cool, super-sized toys. Maybe it’s some primeval boyhood attachment to the Matchbox and Hot Wheels collections I gave away in junior high. Maybe I subconsciously perceive sleek steel mechanisms as an extension of 1980s macho action flicks. Maybe the part of me that loves fast driving yearns for some opportunity to sit behind the controls of any fantastical vehicle that can exceed 100 mph without legal retribution or instant crashing. All I know is it’s fun to look at planes up close.

Longtime MCC readers have seen airplane galleries from past vacation stops such as the National WWII Museum in New Orleans, the National WWII Aviation Museum in Colorado Springs, and the USS Intrepid Museum in Manhattan. But we didn’t have to leave our home state to see more examples of vehicles our nation’s massive defense budget purchased throughout the last century.

After the large salute to George Rogers Clark, our tour of the city of Vincennes continued with the Indiana Military Museum. Incorporated in 1984 and relocated to its current digs in 2013, the museum offers a large and varied display of war memorabilia — weapons, uniforms, gear, vehicles, documents, and other memorabilia. And that’s just on the inside. Even before you reach the doors, the museum grounds are a crowded airfield and motor pool unto themselves.

A Douglas C-47D Skytrain, nicknamed the “Gooney Bird”, similar to one we saw in New Orleans.

Same manufacturer but newer to us: the Douglas A-26 Invader. 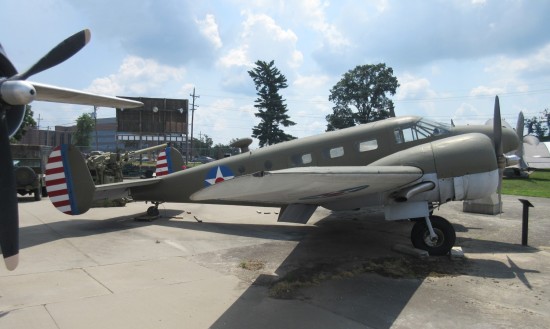 A lighter aircraft, the UC-45J Expeditor have a variety of uses including but not limited to flight training, light cargo, photo recon, and personal transport for field commanders.

For decades, Siły Powietrzne (the Polish Air Force) used the PZL TS-11 Iskra as their main training aircraft. The Indian Air Force had over 400 of their own between 1975 and 2004.

Russia’s own MiG-17F. A related model was used against us in Korea and Vietnam. The Intrepid had one of these, but even more brightly painted.

The Lockheed T-33A model has been used in over twenty different countries. Actor Michael Dorn used to own a T-33. 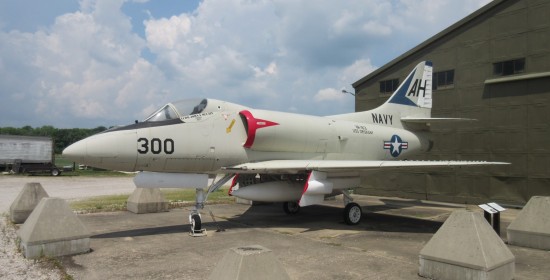 The Douglas A4D Skyhawk was used in conflicts ranging from Vietnam to the Falklands. Lieutenant Commander John McCain flew an A4E in Vietnam. 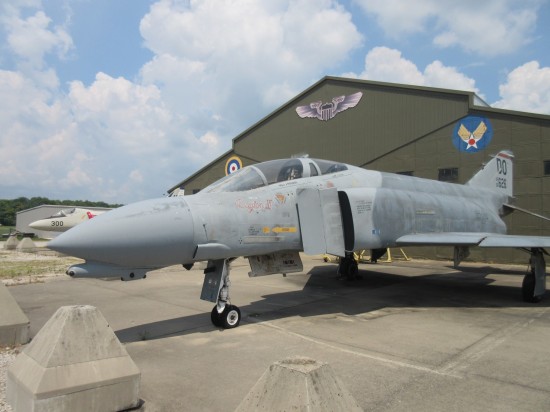 The McDonnell Douglas F-4D Phantom has cousins who were members of the Transformers and the GoBots. In the film Iron Eagle II, Phantoms played the role of Soviet MiGs for some reason.

The museum isn’t just about aircraft. This submarine, once stationed at Pearl Harbor from 1981 to 1997, was one of several vehicles to share the name USS Indianapolis.

Assorted land vehicles lined up to one side.

As of tonight the museum’s sign for the 90mm gun shares dozens of words in common with its Wikipedia page, including entire sentences verbatim. Not the first time we’ve seen that happen with a museum.

Nonlethal military devices outside include a Sperry Carbon Arc Searchlight. After WWII civilian companies acquired many of these for nighttime advertising use. Most likely the Bat-Signal was built by another manufacturer.

Near the front door is a chair honoring America’s POW/MIA soldiers. 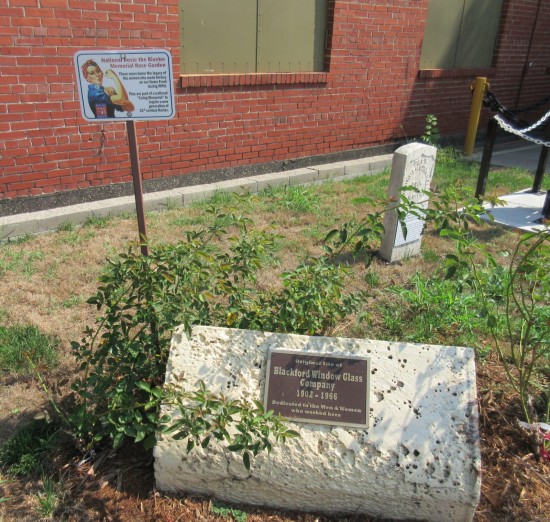 One sign nods to the glass company that used to own this building. The Rosie the Riveter Memorial Rose Garden sign is a sequel to the one we saw in Mitchell, and stands above one less rose than theirs did.

This recreated war bunker in the parking lot is used for special occasions. An ordinary Tuesday morning did not qualify.

In their backyard is a simulated WWI trench. You may remember these from such films as All Quiet on the Western Front, Paths of Glory, War Horse, and last year’s 1917.

And then we donned our masks and peeked inside…