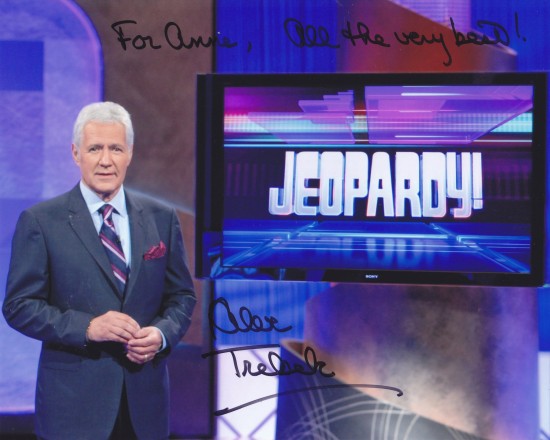 A souvenir from that time Anne wrote him a fan letter in 2013.

I caught the news about the passing of Jeopardy!‘s own Alex Trebek an hour after it hit the mainstream press. An hour after that, I had to be the one to inform my wife. I let her finish her nap first rather that spring a rude awakening upon her. If there’s any emotion that should never be associated with Trebek, it’s rudeness.

Within hours the internet filled up with tributes from past winners and losers alike, from longtime fans, and from anyone who so much as chuckled at SNL’s old “Celebrity Jeopardy!” sketches. Anecdotes, clips, GIFs, memories, and more. The gentle and affirming manner. The love of learning. The patience with every contestant anecdote, no matter how short or pedestrian. The exactitude he aimed for in pronouncing every uncommon name, every foreign phrase, and every affected accent. His indefatigable reading of the silliest Final Jeopardy responses. His disappointment with those who bet small. The way his joy levels cranked up to the max whenever James Holzhauer won another eye-popping dollar amount. How he never complained as Austin Rogers would buzzsaw through his confirmations and demand the next clue. The disastrous football category that went zero for five. That time champion Dhruv Gaur nearly made him cry. The time a contestant won with one (1) dollar. That time he rapped. The guest appearances on Cheers, The Simpsons, The X-Files, Mama’s Family and more.

Yes, Mama’s Family. Even she couldn’t get his temper to flare.

I wish I could write the definitive essay on Life Lessons I Learned from Alex Trebek as a Child, but the truth is I rarely had control of our family TV and didn’t get to turn to it as often as I would’ve liked. Among other random glimpses throughout my formative years, I do recall the one time I taped an episode on VHS, when the salutatorian of my high school class earned a spot in regular competition while he was still in college. Not that we had any relationship to speak of — he was part of a well-to-do clique alongside other students with top-ten GPAs that rarely acknowledged the existence of smart but scruffy clowns like me (farther down the charts at #22). He bombed out at the end of Double Jeopardy and failed to go on to Final Jeopardy. Today he works with an Ivy League school. Meanwhile, I still have the tape.

Even in my intermittent channel-flipping to episodes, as someone who grew up a smart kid but was later hampered by poor choices and other life events, I learned a few things here and there. Not just the facts and figures and trivia and game play techniques, but other lessons observing interactions between adults of above-average intelligence, amiably guided by a gentleman who some have mocked for just being a guy who reads whatever cards or screens are put in front of him. That decades-old joke does him a disservice and shows off a lack of observational skills. Trebek’s eyes would light up a little more — and his chiding of nearly correct answers could cut a little closer to the bone — whenever he had to reveal an answer that eluded everyone else. He may not have been a total jack of all trades, but he was no mere Hollywood empty suit. He took the old Schoolhouse Rocks motto “Knowledge is power!” and delivered it for thirty-five years to millions of homes that agreed with him and wanted to know more.

My childhood deprivation notwithstanding, Anne and I have been following the show for years and had become rather attached to Trebek. We watch it often enough, comment on it online often enough, and bring it up in conversation annoyingly enough that family members reached out to us Sunday night and asked if we’d heard the news. To us the show was — still is! — a great way to jolt our aging brains, learn new trivia, realize what we don’t know, and surprise ourselves with what we forgot we do know. I enjoy those validating moments whenever something I like gets name-checked. (Neil Gaiman! Henry Rollins! The Wire!) I sigh deeply whenever categories represent utter voids in my brain space. (Sports. Opera. Alcohol. Ugh.) And honestly, I may have learned more about history from past Jeopardy! episodes than I ever did in high school. Places we’ve visited on our annual road trips come up in questions so often that sometimes I think the writers are stalking us.

At the heart of it all, Trebek was our guiding light, the guy who invited America to come meet thousands of intelligentsia in all sizes, shapes, colors, and temperaments. For anyone who was ever misunderstood or ostracized just because they read a lot and memorized more than their share of book-learnin’ as a kid, Jeopardy! assured us it’s cool to know all the things, no matter how many funny looks or wisecracks we get from others. Trebek was an equalizer who taught not just through the answers, but through his very conduct. if he wasn’t Mister Rogers’ true neighbor, at the very least they lived in the same ZIP code, and welcomed us in just the same. 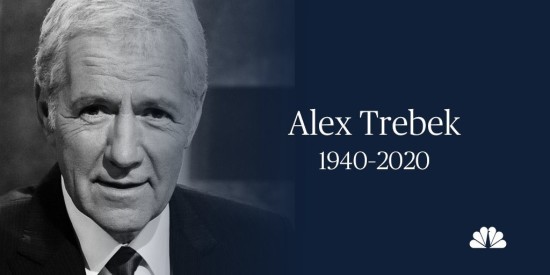