This white guy and his retreating hairline kinda wish we had this young lady’s tonsorial problems.

Each year since 2009 my wife Anne and I have paid a visit to Keystone Art Cinema, the only fully dedicated art-film theater in Indianapolis (for now), to view the big-screen release of the Academy Award nominees for Best Live-Action Short Film and Best Animated Short Film. Results vary each time and aren’t always for all audiences, but we appreciate this opportunity to sample such works and see what the Academy of Motion Picture Arts & Sciences deemed worthy of celebrating, whether we agree with their collective opinions or not.

We’ve already covered the Live-Action half. Next we present the Animated Short Film nominees, ranked from absolute keenest to mostly keen:

* Hair Love: A young black girl blessed with plenty of hair to do with as she pleases tries her best to follow instructions from her favorite YouTube hair-care tutor (voice of Issa Rae), but sometimes it’s not that easy. When all else fails, only one person can help her now: her dad. He means well, but, um, well, there are some complexities only a few talented men among us can handle…or, failing that, men with a righteous motivation and willingness to heed professional advice. The father/daughter dynamics lean toward wacky comedy at first courtesy of a judgmental cat and some very contentious hair, but a few extra twists among the tight family unit brought out the “AWWWWWWWWW!” in our entire audience.

This wondrous project began on Kickstarter, then was acquired by Sony and stuck in front of The Angry Birds Movie 2, of all things. Hopefully the Oscar nom deservedly broadened its audience.

* Sister: Everyone loves a lighthearted recount of childhood squabbling between brother and sister, totally relatable to anyone who grew up with siblings that they loved unconditionally and routinely injured or framed for their own crimes. Done in black-and-white with felt puppets, no less, so they’re extra cute. Then a tonal shift erupts from a potent kind of charge that none of the other four nominees possess, rooted in a bit of Chinese history that no one ever talks about much anymore, all but guaranteeing at least a certain billion folks will never get to see it. An endearing glimpse of one family’s everyday life begets sobering tragedy with an emphasis on “life”. 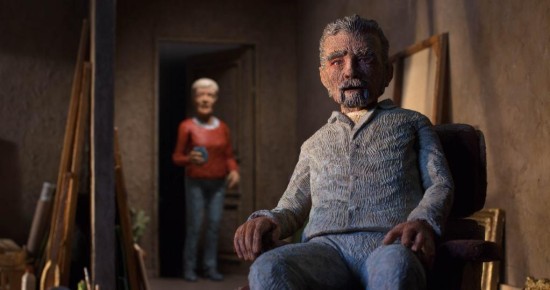 When this man peers into your soul, does he see Cubism or Dadaism?

* Memorable: A case study in dementia from the viewpoint of an elderly artist whose very reality deconstructs into increasingly abstract art. Sometimes he can fake lucidity, but mostly he’s helpless to watch his world transform into mystifying wonders…including his beloved wife. An imaginative, alternative take on the subject that tapped directly into my deep-seated fear of losing the mental faculties that middle age hasn’t already dulled like an old butter knife.

Not exactly in the neighborhood of Garfield and Odie.

* Kitbull: The annual mandatory Pixar nod is part of their SparkShorts program now showing on Disney+, a showcase for employees to create and share their own limited-budget shorts. It’s this year’s lone nominee not focused on human blood relations. The premise is simple: a spunky stray cat living in a pile of trash befriends a neglected pit bull chained up across the sidewalk. Precious moments follow except when we learn the new friend is dog-fighting fodder…and not exactly a champion at it. Nine months have passed since our family dog’s death, watching very good doggos is still not easy for us, and the jarring, disturbing animal abuse (mostly offscreen, but its consequences are not downplayed) was so infuriating that it was hard to settle down and appreciate the tidy uplift at the end.

Another father/daughter dust-up, but this time it’s over feathers, not hair.

* Dcera (“Daughter”): A dead bird on a hospital windowsill evokes separate memories from an ailing father and his visiting adult daughter. To him, it’s a reminder of happier times at the start of a relationship. For her, it’s a symbol of a time when Dad failed to pull off an impossible life-or-death feat. Daria Kashcheeva’s stop-motion Papier-mâché drama — sometimes moving the camera more than the figures — is a bit hard to follow as we switch between two different Memory Lane strolls, but the grim palate and shaky-cam visuals inspired by Lars von Trier, together with its kludged aesthetic, challenges the viewer to find the heart in human imperfection and reconnection. 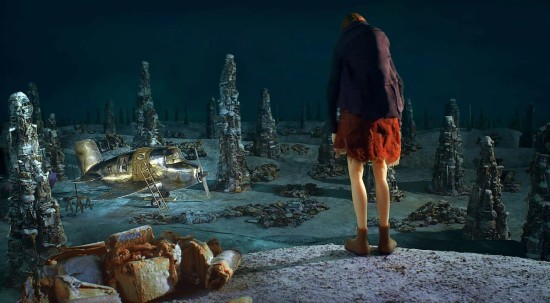 A wish for wings that work.

Each year the theatrical Animated Short Film program also includes “Highly Commendable” bonuses to fill out the runtime to an acceptable length for the ticket price. This year the folks at Shorts.tv provided four extra cartoons, one of which was barely the length of a commercial. At 85 minutes the total Animated Shorts program wasn’t a bad deal for the quality offered. Those bonus offerings, then:

* Henrietta Bulkowski: From Starburns Entertainment, the makers of the Oscar-nominated feature Anomalisa, another Kickstarter’d stop-motion fantasy about love in unlikely places, or at least deep sympathy. Mad Men‘s Christina Hendricks is the voice of Henrietta herself, a hunchbacked woman who’s never been able to stand up straight and gaze upon the sky, whose fondest wish is to pilot a plane. She’s studied for years and might have found a way, but it’s in a restricted area and standing in her way is lone guard Chris Cooper (Little Women, The Muppets), who has an unusual quality of his own. My grandmother developed Henrietta’s condition later in life and suffered unfair consequences as a direct result, so this bittersweet dream-chase struck a nerve in me that hasn’t stopped vibrating yet.

* The Bird and the Whale: Unlikely friendship is struck up between a happy-go-lucky whale and a caged bird left adrift from a shipwreck. 4300 paintings were rendered using the same piece of glass over the course of fourteen months, altered or in some cases erased before proceeding to the next one. Gorgeous to watch, but heartbreaking on more than one level.

The Three Stooges in “Slope Dopes”!

* Hors Piste: French farce about Alpine responders rescuing an injured skier from a snowy mountaintop. Once the skier is secured and fully immobilized inside an insulated stretcher, it’s hearty slapstick all the way downhill with our wacky, clumsy heroes. Old-school Tom and Jerry fans should love it. This one was on the Oscars pre-nomination shortlist, but faced tough competition as shown above.

* Maestro: The French animators previously nominated for the seemingly post-apocalyptic Garden Party return with a two-minute quickie about wildlife opera. That’s it. That’s the short. The end credits are nearly one-fourth of its run time. Digitally insert some cans of beer or Mr. Peanut’s bloated corpse floating on a lily pad and this could’ve been an expensive yet winning Super Bowl spot.