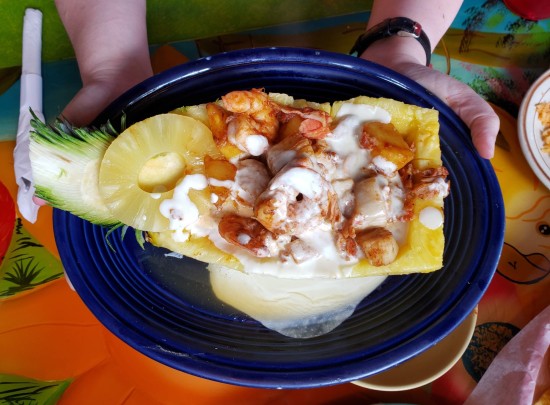 Los Mariscos Tropicales: shrimp, scallops, and crab served in a hollowed pineapple and topped with cheese, salsa, and rice. Anne ate well that day and has so far lived to tell the tale.

It’s a pleasant feeling to enjoy a wonderful meal with a loved one away from the world and its problems. It’s the exact opposite when you’re also silently praying this isn’t your last meal and hoping the daily special isn’t a proverbial bullet with your name on it.

Before our vacation, we hadn’t eaten inside a restaurant for four months. After Indiana went on statewide lockdown, we avoided restaurants altogether for over a month until we began tiptoeing back to them at the end of April for takeout and drive-thru. When the reopening phases were rolled out and restaurants agreed to reduce capacity and enact other safeguards, we still weren’t eager to share airspace with potential infected for prolonged periods. No amount of sizzling steak or decadently stacked chocolate was temptation enough to overlook the risk.

Over time we saw signs that restaurateurs were treating the crisis with utmost gravity. I wasn’t deeply impressed by the flood of email blasts from major corporate chains playing Coronavirus Boilerplate Bingo with the favored, ubiquitous buzzwords — “abundance of caution”, “enhanced cleaning”, “we’re all in this together”, and so on. Such sentiments are often meant sincerely, but words lose their power when everyone chants the exact same ones over and over in the same combinations. We were more assuaged by empirically observable deeds, by care and carefulness in action.

Anne can tell you I was nervous (if she graciously elects to understate it) when vacation time arrived. We couldn’t simply have breakfast at home, go do tourism, then drive directly home for lunch. That wasn’t practical for the travel lengths involved. We could’ve packed sandwiches and eaten by the roadside. We could’ve grabbed drive-thru and eaten while we drove onward. We could’ve fasted until dinnertime. We could’ve simply stayed home in the first place.

We wanted to believe somewhere out there were any number of restaurants taking the situation seriously and doing everything within their power to keep their guests and their employees safe. We wanted to do our part in spreading our budgeted fun-money around to businesses that could really use it, that were willing to welcome us without frightening us. We wanted to rediscover trust in American humankind.

Restaurants were therefore tentatively kept on the road-trip agenda. We reserved the right to flee at any moment if we felt jeopardized. As attentive MCC readers can already surmise, yes, we brought masks.

We were relieved to discover every single employee at every single place we ate on vacation wore a mask. Some wore them more securely than others, but to varying degrees everyone agreed it would be best if we all mutually do our part to minimize our chances of spewing droplets into each other’s orifices. They aren’t a perfect solution, nor did anyone ever claim they were, but they drastically reduce the odds. In this wretched situation they’re the easiest option we have to simulate herd immunity.

(Other than total, uncompromising quarantine, I mean. Much like how abstinence is the best birth control.)

At the Lew Wallace Study and Museum I asked our tour guide her recommendations for local eateries. While we busied ourselves buzzing around their pretty flower gardens, she went back to the welcome center and spent several minutes pulling out a Crawfordsville tourism map, circling prospects, adding notes, and going to the trouble of verifying which ones were actually open. We appreciated her thoroughness and enthusiasm, and on a related side note highly recommend you check out the Study next time you’re in the area. Assuming we’re not on statewide lockdown again by then.

We drove around Crawfordsville for a short while, not too long, and noted a few extra sights…

A 160-foot mural depicting nearby Sugar Creek, painted in 2013 by a dozen artists overseen by local schoolteacher Ann Stanley.

The Montgomery County Courthouse, for the architecture fans out there.

After weighing her options, we ended up a few blocks west of the Study at Little Mexico, a Crawfordsville favorite opened in 1993 by a couple transplanted from Chicago who lived in the area for years before sensing a culinary gap and deciding to fill it. Circa 2009 they had the place remodeled into a bright, fantabulous wonderland of imagery.

Little Mexico on the outside, seemingly unremarkable for a small-town establishment.

Calls for safety and inclusion beyond these doors for all who agreeably abide.

The embossed fresco at our table.

The furniture and decor next to us. The masked waitstaff in the hall were probably deciding whose turn it was to approach.

Other diners sat at tables sufficiently removed from ours. We kept our masks on until it was time to drink, nibble at chips, and eat in earnest. The staff kept their masks on whenever they had to come near us. Once our meals had commenced with gusto, they stayed far away while mouth motions were at maximum intensity. When I asked for extra napkins, our waiter returned, stood as far away as possible while reaching them over to the table corner, stretching like a bear trying not to get caught in a trap. We understood, and did our part to reduce contact points by making no further requests. Dessert was a little enticing, but I wasn’t feeling cocky enough to prolong our exposure.

My nerves were unsettled when we first sat down. I calmed edge-by-edge as time went on. I grew restless when it was clear we were finished and a good fifteen minutes passed before they brought the bill. During that time a large family was seated ten feet away — an acceptable distance according to current standards for the interim normal, but a little voice inside worried, What if one of them gets up? And they look for the bathroom and walk the wrong way and here we are and they’re contaminated and AAAUUGGGH.

Eventually we paid and left without visible incident. My meal was fine, sufficiently spicy and hearty; Anne’s wasn’t spicy, but was even better for its showiness and better variety of non-meat toppings for balance. The chips were what they were.

My lunch: the Burrito Chile Colorado — pork in a red mole sauce.

I tried to stave off those little mounting anxieties as we left town for our next destination. No one wants their death certificate to read “Death by Burrito”. I might expect that in John Scalzi’s obituary, but it’s not one I would’ve predicted for myself.

Spoilers for the rest of this miniseries: as of today we’re now sixteen days past our final vacation activity. So far, no COVID-19 symptoms. Ostensibly that means we made it through the entire vacation and through every stop safely — every museum, every park, and every restaurant. Either everyone was blessedly virus-free, or the masks worked. Or maybe both! Or we’re now secret, asymptomatic plague carriers, which is, in all seriousness, why we’re still following the protocols every day, even at the expense of in-person social interactions and family gatherings.

Much of this week and this miniseries would’ve looked rather different and played out more fearfully without those tentative first steps into Little Mexico.