My lovely wife while she was still smiling.

One major item on our travel agenda was more exercise. Long walks are a staple of nearly all our vacations. They’re our favorite form of exercise. Lord knows we needed them now more than ever. If you compile our past several years’ road-trip photo galleries into a flipbook omnibus, you can see us growing grayer and larger over time. We’ve been trying to get outside for more neighborhood walks, but the surroundings have become routine and repetitive. All we ever see are the same houses and sidewalks over and over again out here in cookie-cutter suburbia, which at times can feel like a Hanna-Barbera background. It’s much more fun to walk around unknown places, see new sights, and change up our terrain. 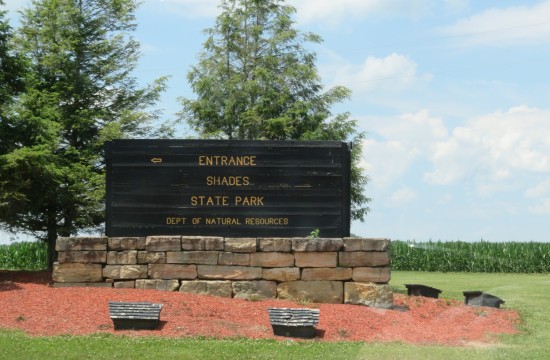 Welcome to Shades State Park, where our motto is “It’s Like Someone Wished You into the Cornfield!”

I’d honestly never heard of Shades State Park till Anne discovered it during her research. It’s been around for decades, but I’ve never heard anyone talk about it. Regarding the name, legend has it:

Originally, the area was known as the “Shades of Death”. There is debate as to why it got that name. Some say it was due to the way the trees cast their shadow on the ground below, making it look like a black forest. Others say it was because of a settler’s death, although sources disagree if the settler in question died due to Indian attacks, or was killed by an angry, axe-wielding wife.

Had we known Shades might be a burial ground of sorts, perhaps we would’ve planned our visit differently.

Me and my five months’ hair growth, and one of the many thousands of flights of wooden stairs.

Shades is some twenty minutes southwest of Crawfordsville. Its proximity to our path was among its selling points. We liked the idea of checking out someplace we’d never been before. We thought to ourselves, hey, why don’t we hang out at a state park where nobody else is likely to be.

Throughout the afternoon we chatted with quite a few other visitors along the trails who’d used the same rationale. Here in the Age of Coronavirus where the great indoors is a health hazard, outdoor activities are suddenly more appealing for lack of competition and harmful side effects. People want to get out of the house and do something. Hoosiers have several state parks at their disposal with cheap entrance fees. It was a nice day, temps in the mid-80s. Someone besides us was bound to notice.

The upswing in foot traffic that day was no one-time anomaly. As of this writing, our state parks-and-rec site advises Shades has been reaching full parking capacity on weekends lately.

Remember when bars and clubs were “in” things? Now Indy’s hottest club is SHADES. This frolicsome forest is in the dead center of the heartland and this place has EVERYTHING! 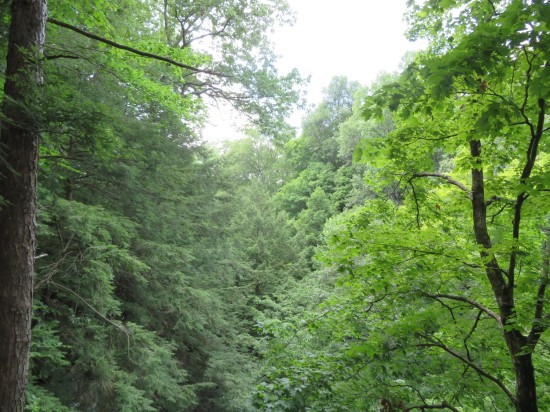 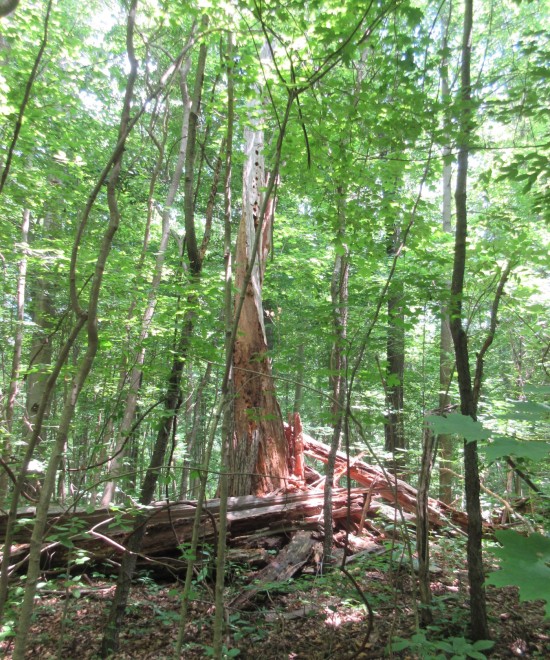 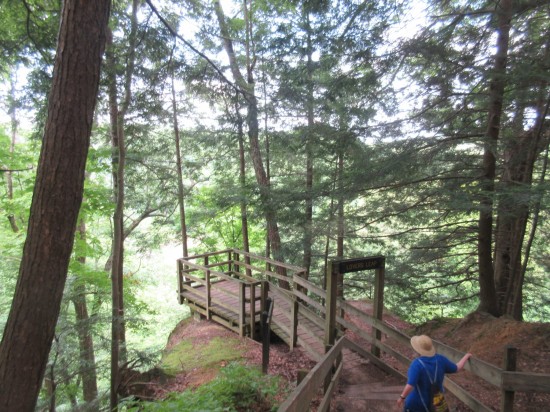 An even creepier cliff next door to Lovers Leap! 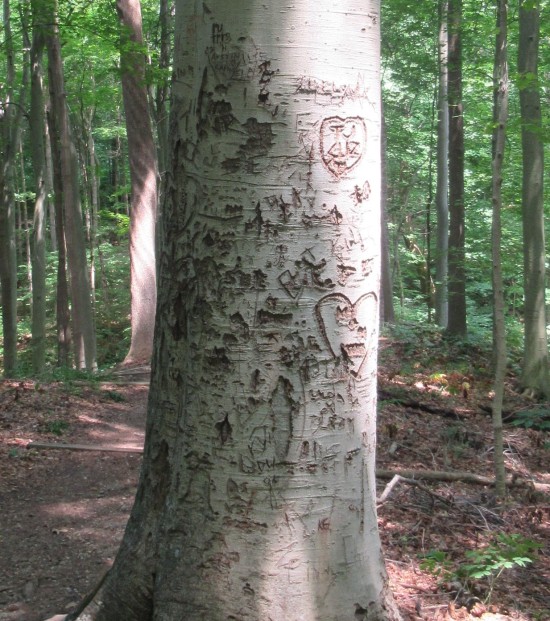 …and then there was Pearl Ravine. That’s that thing where you traipse down a narrow passageway and everything goes sideways and it’s like you’re heading straight for the Pearly Gates.

When we reviewed the park map, I noticed Trail #2 seemed to have more sights marked on it than the other trails. It was labeled “rugged/very rugged” at an estimated length of 1.25 miles. We’ve done rugged trails before. At our favorite Indiana park, Turkey Run (only five miles southwest of Shades), we’re accustomed to traversing their famous Trail 3, which is so rugged it has ladders at one point. We figured if we could handle that classic, how bad could Shades’ Trail #2, whose special features included something called Pearl Ravine?

After descending many, many, many flights of stairs, later that day at the bottom of the hillside Trail #2 took a sharp right turn and began heading up a creek at a steady incline.

The exact point where our day turned a corner and became an uphill battle.

At first it was a benign creek. It kept inclining as we went. The path sometimes narrowed into bottlenecks more awkward to pass through. As swaths of loose rocks began to outnumber solid ground, we had to weigh each step carefully, tentatively, bewaring slippery rocks, imbalanced teeter-totter rocks, and large rocks belying shifty gravel piles underneath. We climbed over and under fallen trees — some thin, some huge.

Anne began to lag behind. That’s not unusual. Once my body remembers what physical exertion feels like, after consecutive minutes of movement I sort of get into an exercising groove and my body picks up speed. When I shift into that mode, her cute tiny legs can’t match my stride unless I occasionally break it for her. The unsteady forest floor made it difficult, required more deliberate step-taking, demanded attention be paid to every foot placement.

The scenery is pretty at first.

No two lengths of it are the same. You want to keep going because you want to see what else there is to see. 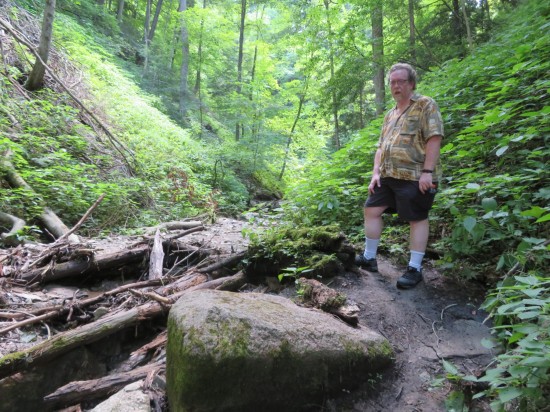 Every so often you pause to catch your breath, to enjoy a moment in God’s creation, and to take photos of big dummies who talk right as you tap the button. 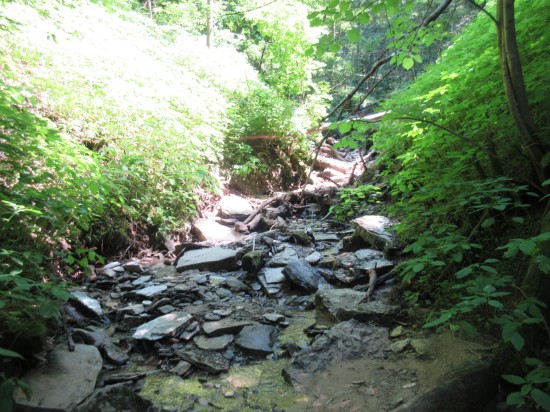 Then you start losing track of minutes and stop noticing new things, and you realize you’ve subtly shifted from peaceable, natural tourism mode to just wanting to get to the end of this endless obstacle course. Your fun activity is now a chore.

Then you realize it isn’t stopping and you’re nowhere near the end and its getting harder, not easier, and heavens to Murgatroid HOW MUCH FARTHER.

After countless minutes of struggling up Pearl Ravine and its uphill rocky creek, Anne’s body duly notified her it could not go on and we had to stop.

Anne crouched and leaned back against a medium-sized white tree lying conveniently next to us. Her legs had been feeling wobbly from the first several blocks of walking, but it got worse. She felt as though she was having trouble catching her breath. During the scary moment and after the fact, she couldn’t recount any other particular symptoms — no chest palpitations, no dizziness or delirium, no dehydration that she could sense, no urge to vomit like that time I had heat exhaustion at a theme park. All she knew is her body stood its ground, told her NO, and put itself in time-out.

We rested for several minutes. A family of four came by from the opposite direction and asked if we were okay. We compared notes and they let us know the rest of the path that lay before us was not short. I have no idea if we’d even reached the halfway point.

It was time to go home, but in that ravine, the trail didn’t intersect with any others that might let us escape partway through. There were no easy shortcuts back to the parking lot. We couldn’t be exactly certain how much farther the path ahead would run, or how much more rugged it could get. If things got worse, we were in a dead zone with no phone signals — a common drawback in Indiana’s state parks.

Thus we chose to turn around and retreat the way we came. At least we knew what to expect, the proverbial option of going with the devil you know. We took it extremely slowly. I let Anne set the pace. We stopped any and every time she felt like it. The downhill version of the creek was slightly less taxing, but not a relief.

Then there were the stairs. Those many, many, many flights of stairs standing between us and the car. 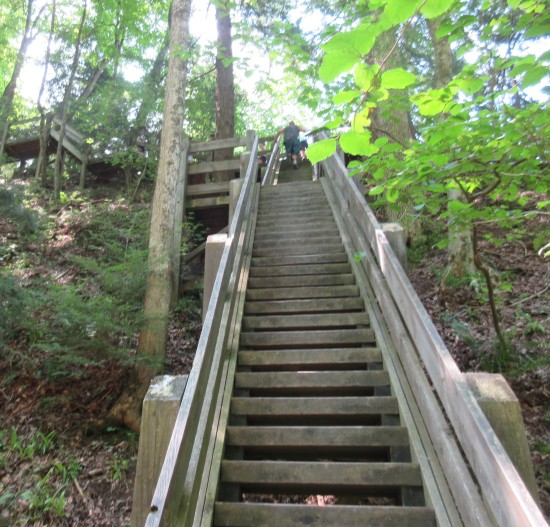 This was “eye of the tiger” time but in extreme slow motion. Anne climbed up a flight, then rested. Climbed up one more flight, then rested. Repeated the process till there were no more flights to conquer. I gave her my Gatorade, which should’ve had more electrolytes than her bottled water. I was relatively fine, all things considered. When I overexert myself, my mind can block out pain to a certain level and won’t notify my nervous system till I wake up the next morning, can’t do much more than hobble and moan, and regret everything.

We caught up with the family of four whenever they stopped to gawk at nature. Then they would catch up and pass us. Then they stopped again. And so on, back and forth. We hung out with them on one of their smoke breaks. Fear of COVID-19 might or might not have crossed everyone’s mind, but the strongest shared sentiment in our confab was “Wow, this trail is destroying us.”

A patient eternity later, we ran out of stairs and reached level ground. Anne sat down at the first open bench we found. I walked the rest of the way to the car at the next lot up the road, then drove back to pick her up.

And that’s how we ended the first day of our vacation. It’s also the story of why we stayed home the next two days to recuperate.

We hate admitting that we’re getting old, but we’re thinking it might be time for us to retire from “rugged” trails. Hopefully we can enjoy natural sightseeing just the same on the state-park equivalent of bunny slopes.