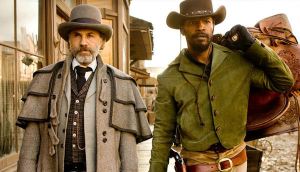 I hadn’t originally planned to see Quentin Tarantino’s Django Unchained. Unlike many of my longtime Internet peers, his films aren’t an automatic draw for me. Though Reservoir Dogs has been a qualified favorite of mine since college, the rest have been a mixed bag. His previous work, Inglorious Badwerds, was a mature, complex, riveting film about WWII and about the role of film in WWII, but was hampered by Brad Pitt’s Kentucky-fried B-movie brigade who snuck in from the direct-to-video good-ol’-boys revenge flick next door. From the trailers, Django looked to me like a 2-cool-4-school blaxploitation Western. Call it Shaft in Texas or Black Grit. Despite the talented cast involved and the joyous responses from the critical majority, it didn’t really sound like my kind of movie.

Then it was nominated for the Best Picture Oscar. As explained in a previous entry, I’ve watched every Best Picture nominee since 1997, whether I was enthusiastic about them or not. On this technicality alone, I checked Django out.

As with Inglorious, the movie had its engrossing parts. Returning champion Christoph Waltz is magnetic as a German bounty hunter who speaks carefully enunciated English (and some French — once again multilingual), lets money determine his direction, and has little use for slavery. Jamie Foxx is the slave with knowledge he needs to tackle one profitable group of targets, but who comes to mean more to him as they journey through the South together. Meek and oppressed at first, Foxx’s Django becomes an apt pupil of the generous outsider, discovering his innate flair for gunfighting and slowly learning how to play-act the role of a courageous vigilante long before he completes his transformation into one. His rise to power is preposterous at times (he’s apparently the first black man in world history to sport sunglasses), but convincing — and sometimes alarming — as a man who’s lost everything dear to him and means to reacquire the most important part by any means necessary, even if it means letting innocents die.

Their episodic quest is fraught with volatile encounters with well-known guest stars, most of whom popped up in the trailers. Leonardo DiCaprio revels in a rare antagonist role, menacing Our Heroes as a plantation owner with something Our Anti-Heroes want. Don Johnson as another plantation owner plays ably against type as Tarantino’s token Older Comeback Star. Keen eyes may also recognize Dukes of Hazzard‘s Tom Wopat as a marshal; classic Italian actor Franco Nero as a slave owner; Dennis Christopher (Stephen King’s It) as DiCaprio’s sycophantic lawyer; character actor James Remar as a silent but deadly henchman; Jonah Hill as one of many disgruntled KKK lynch-mob planners (in the most hilarious scene); and more more more. It’s a treasure trove of cameos, and I’m willing to bet that some of the people I didn’t recognize are secretly bygone stars of obscure ancient films that Tarantino has watched five times apiece.

Scariest of all to watch is Samuel L. Jackson as DiCaprio’s head slave, a septuagenarian Alfred Pennyworth who keeps the household running smoothly and is more than happy to preserve their subservient, racist way of life through strict and occasionally brutal means. Jackson stares down the audience and all but dares us to look away as he enforces his master’s wishes, even during his master’s moments of weakness. It’s during those scenes involving complicated shades-of-grey race relations that Django is at its most instructive and its most intellectually challenging. In a world where slaves didn’t know any way of life except confinement and coercion, they’re frightened and confused at the mere sight of a black man on a horse. In fact, no one understands that sight, least of all the grungy white folks who insist that’s not How Things Work. If you’re a fan of incredulous slack-jawed staring, Django’s curious freedom elicits plenty of it from everyone.

Once again, though, Tarantino’s indulgent-geek tendencies pervade the proceedings and compromise the impact. I expected a few disturbing scenes of slave torture (and that expectation was distressingly met), but the Grand Guignol gunfights are steeped in gallons of blood, drenching the actors and sets. Bullet wounds aren’t mere pockmarks but fleshly geyser bursts, as if everyone’s blood vessels were filled with tiny time-release grenades. The climactic gunfight turns DiCaprio’s mansion into a virtual abattoir. Granted, some of this quote-unquote “excitement” compensates for several lengthy, watch-checking scenes that consist of characters negotiating terms and signing contracts, but I was more interested in Django’s quest and his partnership with the savvy German than I was in all that splattering.

And then there’s that controversial reliance on the dreaded, copious N-word. I’m not immersed enough in nineteenth-century history to know whether or not its presence is historically accurate or just stylized overkill (cf. Jackie Brown). Either way, one conservative movie site counted over one hundred N-words, compared to a relatively restrained forty F-words. I went on record long ago about my disdain for everyone-else-in-the-world’s addiction to harsh language, but this was a very different level. The N-word became like ubiquitous wallpaper, decorating every scene and blurring together the more it persisted. By the end of the movie I found myself getting used to it…and lamenting that I was getting used to it.

So far Django Unchained isn’t my least favorite Best Picture nominee, nor is it my least favorite Tarantino flick (that dishonor still belongs to Kill Bill Vol. 1), but I hated that the commendable cinematic qualities and the irritating distractions wouldn’t stop punching each other in the face while I was watching.

However, to answer the burning question that MCC is always happy to verify: yes, there is indeed a scene after the end credits. If you haven’t seen the film, a description of the epilogue won’t mean as much to you, but it succinctly encapsulates the movie’s shoulder-angel/shoulder-devil dichotomy. For those who fled the theater prematurely and really want to know without seeing it a second time…

…it’s only a few seconds long, but it’s an apt thematic capper: three slaves sitting in a cage in the middle of a wagon trail. Their door is unlocked and their captors are dead, but they can’t perceive their newfound state of freedom, and they remain stupefied by the events that brought them there. One of them speaks a single sentence, four words long.

The last word spoken in the movie is, of course, the N-word.