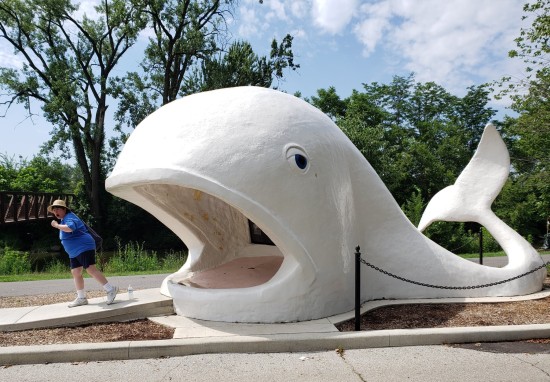 If you enjoyed our previous chapters at Shades State Park, Spring Mill State Park, and George Rogers Clark National Historical Park…well, this one’s for all you fans of walks in parks.

After our tour of planes in Peru, we doubled back southward toward the city of Kokomo. No relation to the Beach Boys song, though I imagine residents got sick of the jokes thirty years ago, Kokomo’s name reputedly comes from Ma-Ko-Ko-Mo, a Miami tribesman whose name meant “black walnut”. Today it’s a big manufacturing town, a frequent generator of innovations in the automobile industry, and a bit of a tornado magnet. Famous faces from Kokomo include Survivor‘s Rupert Boneham; Norman Bridwell, creator of Clifford the Big Red Dog; Cool Hand Luke costar Strother Martin as the guard who utters the famous line; and teenage AIDS activist Ryan White. We’d never been to Kokomo and thought it was time to change that.

We brought a to-do list of small but mighty businesses to check out, but hit a snag. We hadn’t spent enough time at Grissom Air Museum. When we arrived in Kokomo, every place we wanted to see wasn’t open yet. Bummer.

To pass the time and burn more calories — one of our secondary objectives for this vacation — we digressed to Foster Park, a modest place with the standard assortment of what one would expect to find in a city park with a few extra touches, some craftier than others. Exhibit A: Willie the Whale, star of our lead photo. 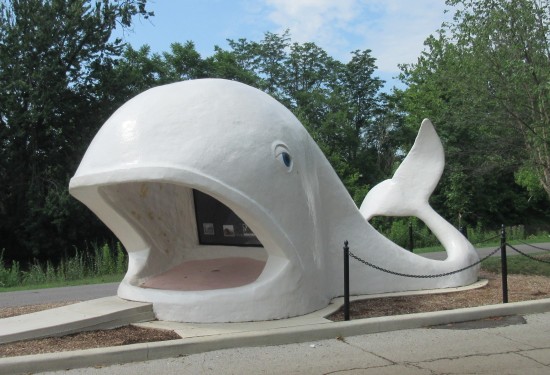 Oh, the stories Willie could tell…

Willie began life as one of the original decorations at the first incarnation of our Indianapolis Zoo when it opened in 1964 out on the east side. The creation of an artist named Richard F. Kishel, Willie once had a working blowhole and an aquarium in his mouth. Those special features eventually faltered, but he stood on display till our zoo Mark I shut down in 1987. I visited the original location once as a kid. I don’t remember Willie, but I remember reading an early-’80s National Geographic book about the new concept of open-range zoos, then went to our zoo and found myself depressed by its oppressive use of archaic tiny cages with concrete floors. 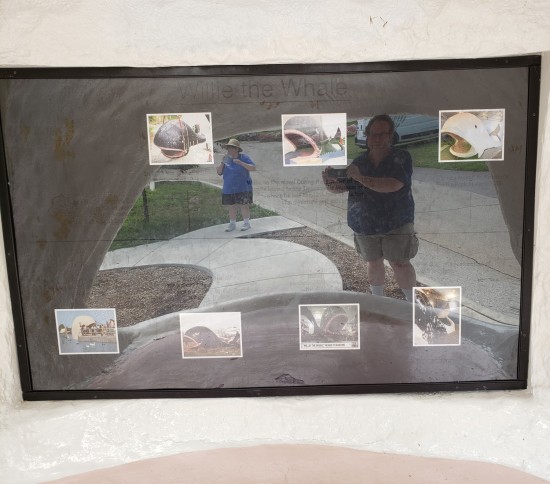 A few photos from the old days are hung inside Willie’s mouth along with faded exposition.

The zoo moved to its present digs and much more generous and humane enclosures in 1988. By then Willie had moved on. Over the next 22 years his environs would change as he changed ownership. His travels would take him to another zoo, a water park, a miniature golf course, and at one point a police impound in Rushville. In May 2019 Willie moved to his new forever home in Foster Park, where children and unaccompanied adults can play on him anytime when there isn’t a pandemic raging. 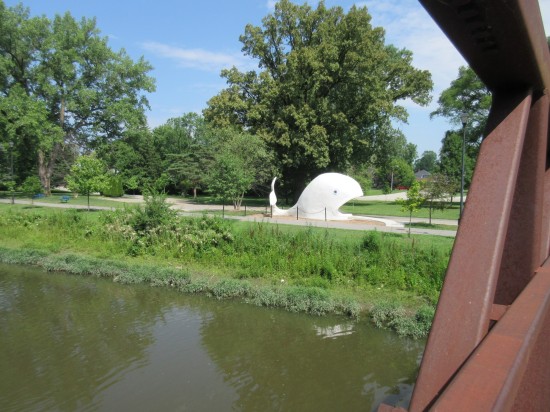 The view of Willie from the bridge over the creek.

Other park amenities include the Kokomo Arts Pavilion performance stage, a playground, a gazebo, tennis courts, basketball courts, a softball diamond, and a skate park added last year. We didn’t traverse the entire perimeter of the park and missed a lot of that. Meanwhile where we did go, life of a sort went on. 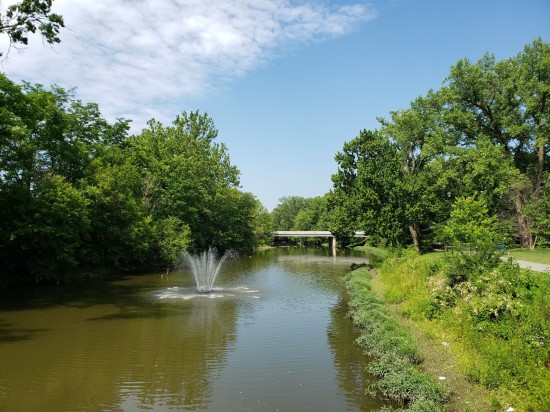 Bordering the park to the south is Wildcat Creek, which runs dozens of miles west to Lafayette. 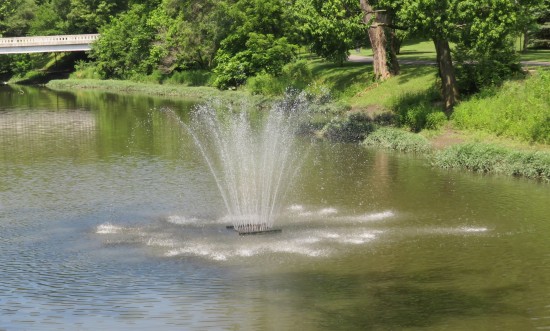 Closeup of that fountain in the middle of the creek,a nice feature for a nice day. 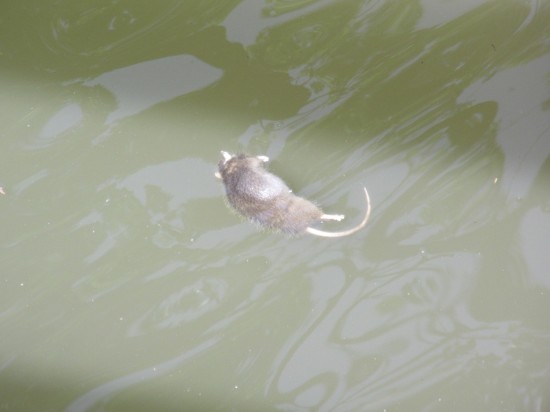 Less nice: a dead possum floating under the bridge. 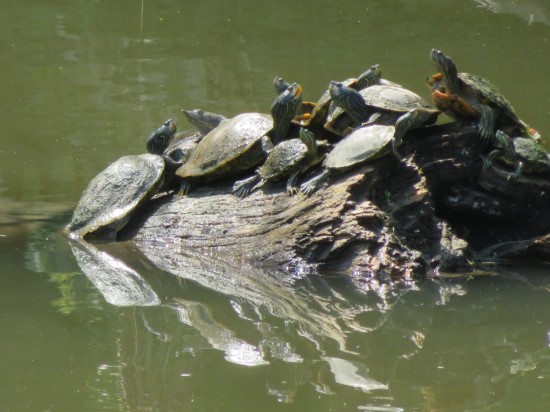 Upriver, a gang of turtles just stared at us like they were daring us to make a move. If they knew what happened to the possum, they weren’t talking. 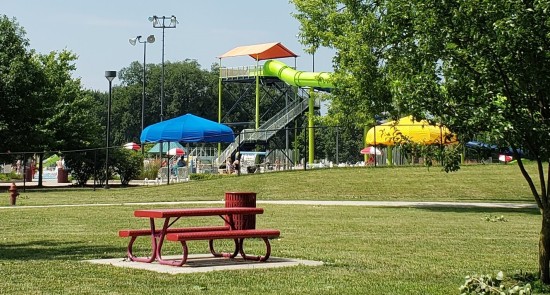 Across the creek and not far away, Kokokmo Beach Family Aquatic Center was open for summertime business and welcoming a handful of swimsuited families despite The Virus. 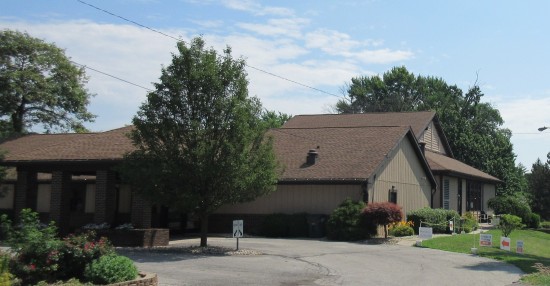 Problems at the water park within the next 14 days? No problem! Foster Park has its own COVID-19 testing site. 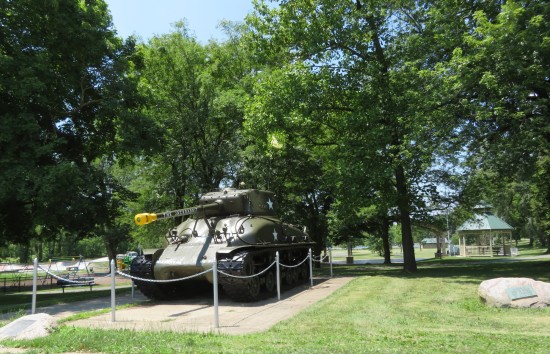 Over on the park’s east border, this M-1 Abrams tank nicknamed Jackrabbit has been parked in Kokomo since 1958 and received a five-figure fundraiser renovation in 2018. 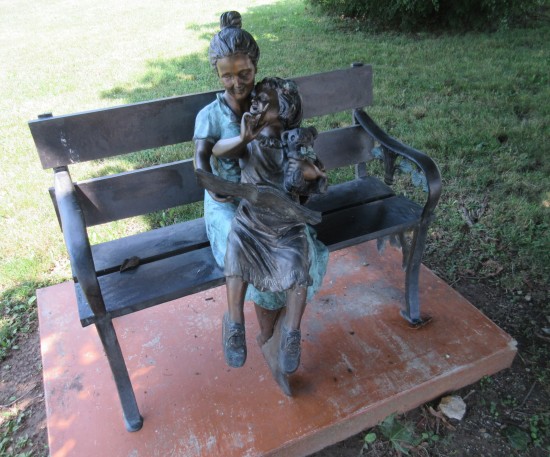 Ending on a more hopeful note: near the Kokomo’s Senior Citizen’s Center, a 2011 “Kokomo Seniors” statue pays tribute to “Knowledge passed from generation to generation to ensure the future.”

…and then we got the heck out of there as more walkers began to arrive for their noontime workouts.