That’s us chasing waterfalls. Why stick to the rivers and the lakes that we’re used to?

We’d come all the way to Mitchell to see the Gus Grissom museum at Spring Mill State Park. It seemed a shame not to enjoy the park itself while we were there. Despite our debilitating incident at Shades State Park, we still had use for more exercise. This time we chose the least rugged trail possible, a gentle lap sketched around Spring Mill Lake. Best of all, nary another human came within a hundred yards of us on our serenely maskless expedition.

Our initial view as we approached from the south along its boat ramp.

A sunnier view toward the east, 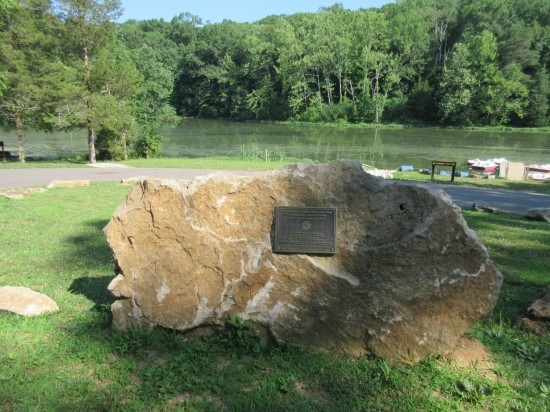 A plaque in a rock noting completion of a restoration project, one of several such statewide done as part of the Indiana Bicentennial. 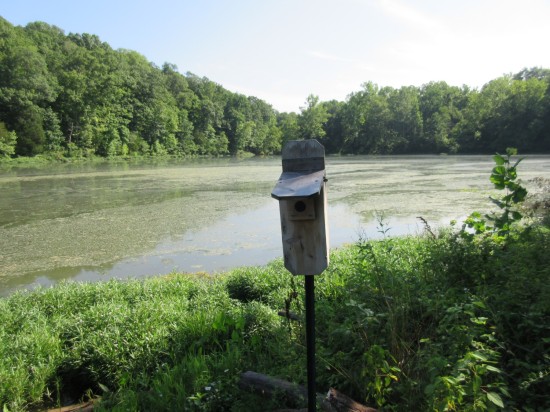 A little birdhouse for the soul.

A few bridges broke up the monotony of the plain dirt path. 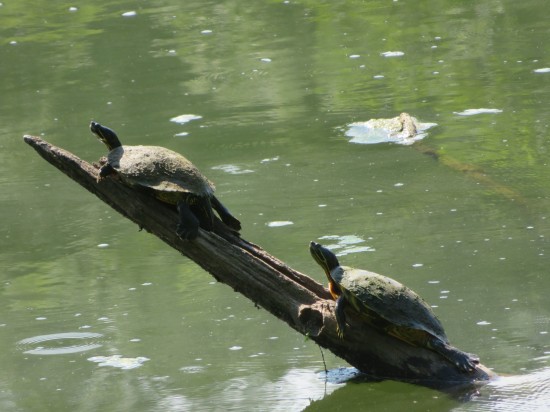 The closest we got to an action scene in this idyllic setting was a pair of turtles climbing a branch over the water.

After these photos, both turtles plopped into the water and paddled gently away. Like I said: action scene. 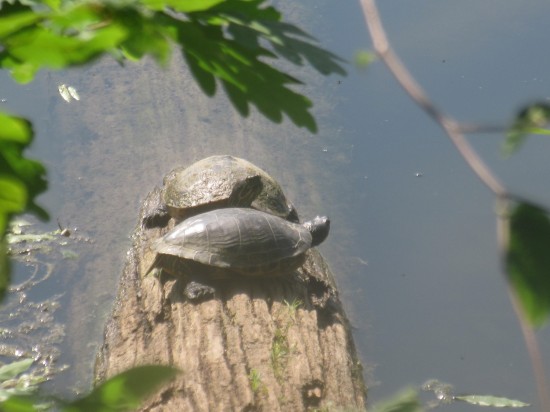 A second pair of turtles. This was far more wildlife than we usually see on our happy nature walks literally anywhere else ever. 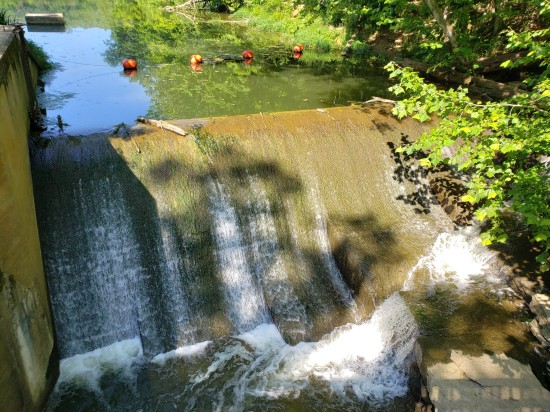 An overflow dam in the northeast corner makes a nice waterfall leading into a creek that diverges from the trail markers. 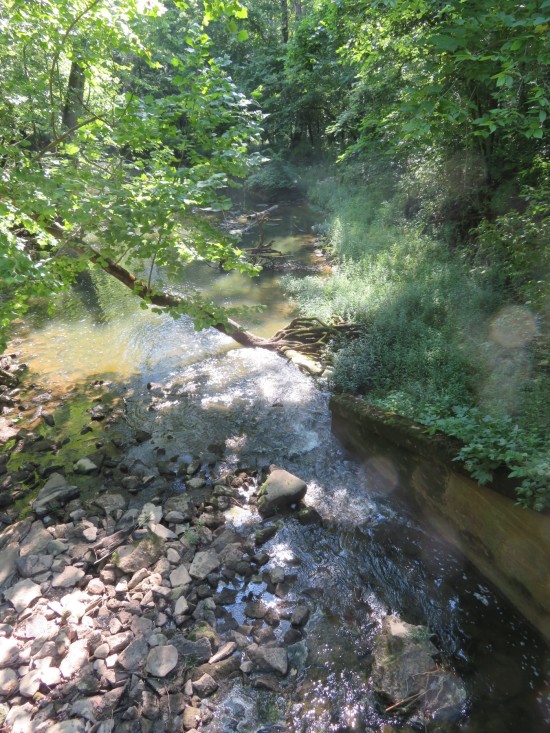 A view of the creek from an overhead bridge, from which we could stare into its vanishing point beyond the treeline.

A lake vantage from the shade, a cooler place to be. 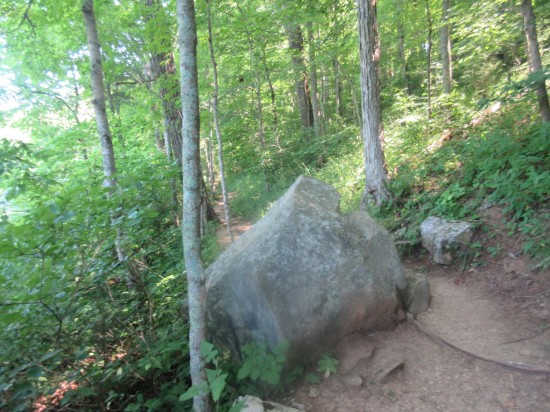 Inexplicable boulder on the trail from nowhere. 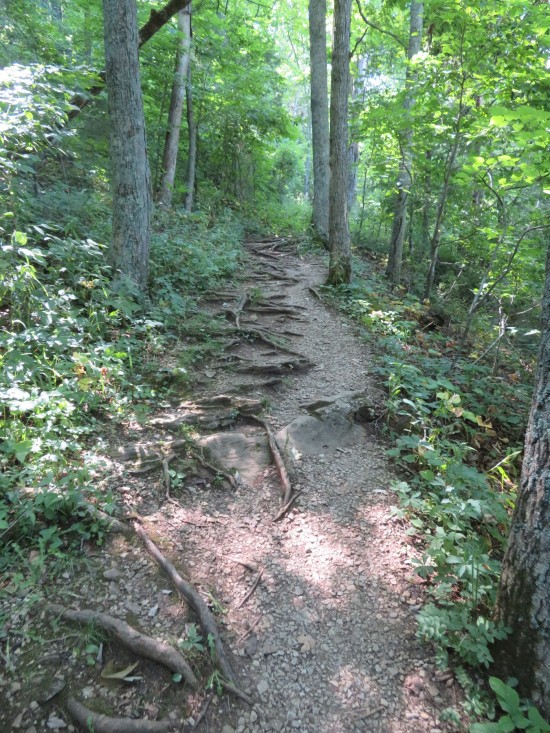 This is about as “rugged” as things got. No worries about heatstroke or dehydration this morning.

Still easier than Shades, and still not as damp. 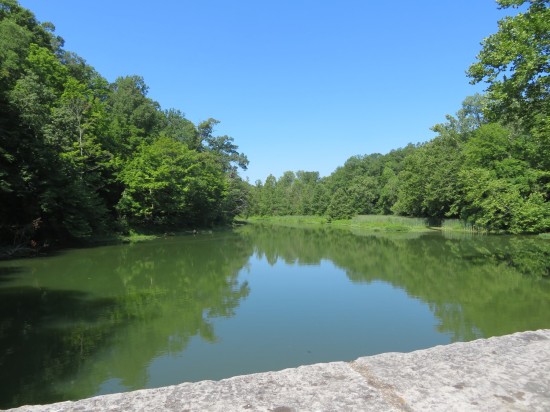 A reflection viewed from the lake’s eastern shore.

After our lap around the lake (and one more wildlife appearance we’ll return to later) we drove to another section of the park where something called a “Wilson Monument” was dotted on the map. We saw no explanation. We had to know if we were missing out on anything cool.

For our last leg we parked at Spring Mill Inn, which apparently does enough business to merit a two-story parking garage.

Coneflowers by the inn, much like what we’d seen at the Lew Wallace Study.

To our chagrin, the trail and its map disagreed on its shape and intersections. At one point we found ourselves creeping down a nearly vertical slope of overgrowth to reach a paved sidewalk that the brochure swore was reachable just right there, and yet was not. Eventually we found the landmark in question: a monument to one Alexander Wilson (1766-1813), dubbed a “Father of Modern Ornithology” by some long, long ago. At some point after his death his crown was passed on to John James Audubon. But the guy who owned this property in 1866 was a Wilson superfan.

Hence this salute to Wilson’s outstanding achievement in the field of 19th-century birding. It was not, as I’d wildly guessed, Woodrow Wilson’s Presidential gravesite. Perhaps that’s for the best.