No disrespect intended to Gus Grissom or those who made Spring Mill State Park possible, but our most fascinating moment on the park grounds was that time we hung out at the beach with a goose.

As we rounded the final section of Spring Mill Lake, Trail #5 merged with the road — well, that’s not quite right. The safety of the dirt path ended as the trail markers continued along the roadside, directing visitors to stroll the pavement where cars could come run us over at any moment. No breakdown lane, no bicycle lane, not even a grassy strip along the roadside — just bridge walls and thick, impassable brush. If we wanted to finish the circuit and return to our car, we had to walk in the street for a few hundred feet. I mean, at least it didn’t count as “rugged” terrain, but I wouldn’t call it safe.

Thankfully it was a slow Monday morning and we only had to tense up while two cars each swerved around us. We rejoined the non-asphalt, no-cars-allowed version of the trail farther up the way and followed it to a dirt beach on the lake’s southern edge. We had already been spoiled by the sight of four turtles and expected no more wildlife.

Lo and behold, Spring Mill offered bonus animals. Unfortunately it was our old arch-nemesis, a flock of filthy Canadian geese.

Not our favorite bird. At all.

This was not a treat. We have Canadian geese back home. They loiter around our retention pond out back. They dine in our grass and weeds. They use our sidewalks as Port-o-Lets. They pilfer veggies from the garden of our next-door neighbor, who sometimes wards them off with firecrackers. They honk in the wee hours of the night and drive Anne up a wall. I sleep through their obnoxious squawking, but I empathize with her indignation. Other than the occasional rumor of a stray coyote, they’re the worst animals that wander our neighborhood. We’re not interested in seeing everyday sights on our vacations, least of all these chubby nuisances that make vultures look good.

We were prepared to snap a single photo, declare ourselves done with them, and walk on. Then we realized one of these things was not like the other.

Standing among the stragglers nearest us was one (1) actual white goose. Well, white-ish, anyway. Close enough. Just standing there, plain as day, the lone white(ish) sheep of their icky black-sheep society.

“WAIT. Not yet. Gimme a minute to freshen up first if you’re gonna Instagram me,” 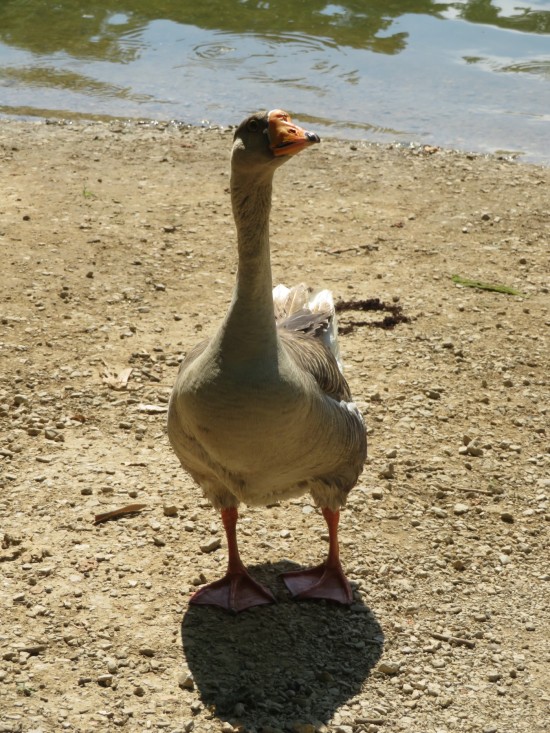 “Okay, ready. So let;s — wait, hold up. Who are you? Are you people even influencers?”

White geese in zoos? Sure. Farms? Probably. Disney cartoons and Babe? Who hasn’t. But as far as we can remember, neither of us had ever seen a white(-ish) goose in the wild before, at least not this closely. They’ve doubtlessly migrated hundreds of feet above us, but they’ve never deigned to descend and approach us. Their nasty cousins, you betcha, but none resembling the traditional storybook type.

We had questions. Why is it putting up with its avian ragamuffin cousins? Is it normal for the two species to mingle? Why just the one? Was it an outcast from another clique? Was it adopted into this flock after its entire downy family was taken out by a pack of shotgun-toting Elmer Fudds? And why wasn’t it scared of us? Why did it just hang out for a few minutes? Was it expecting food? If we don’t have crumbs to offer, will it head-butt me in the groin and snatch my wallet?

As our least threatening party member, Anne approached more closely than I did. She stopped a good six feet away from the goose and took nearly every shot you see here. Her subject stayed put and didn’t panic. I imagine it had as many questions as we did.

Not sure if the goose was scrutinizing Anne for zoological research purposes or trying to hypnotize her. 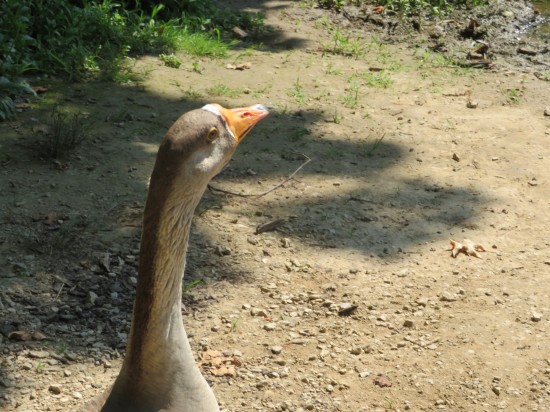 Frustrated with the communication barriers, the goose turned its back on us and retreated to the water. 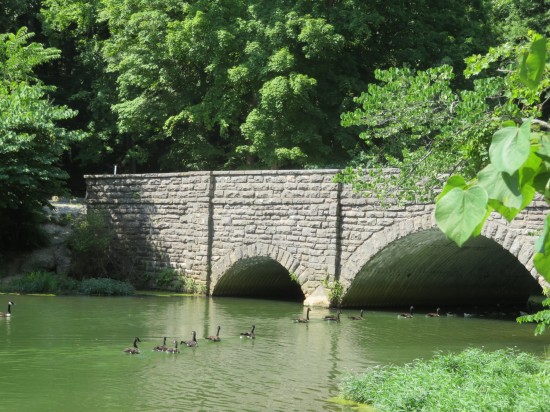 By this time its associates were floating in formation toward the bridge, beneath the street we’d just crossed. Yeah, y’all BETTER run. 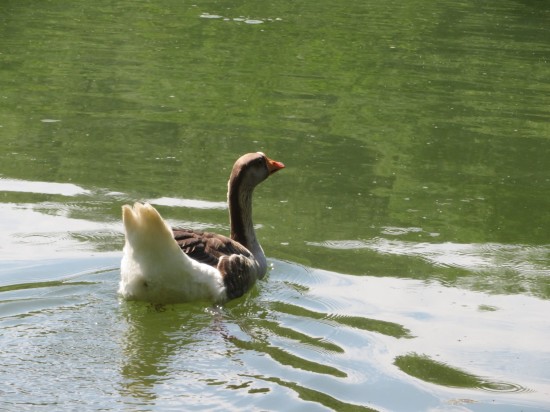 Our observer waddled into the lake and pushed off in the direction of its clan.

It turned and took one look back at us. In that moment we three shared one thought: “What was THAT all about?”

Hopefully we’re not unwitting plague carriers and we didn’t give it The Virus.