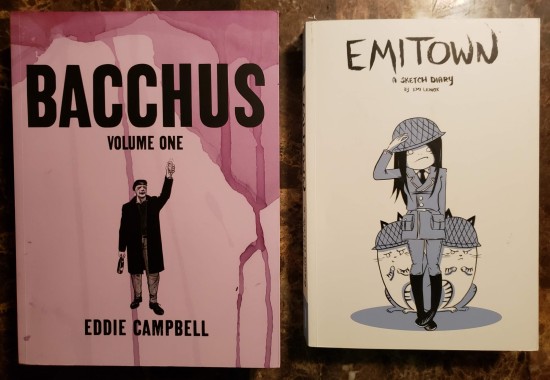 Every year, each and every squarebound work of qualifying length that I’ve read gets a capsule review apiece. I refrain from devoting entries to full-length book reviews because 999 times out of 1000 I’m finishing a given work decades after the rest of the world is already done and moved on from it. As time permits and the finished books pile up, I’ll be charting my full list of books, graphic novels, and trade collections in a staggered, exclusive manner here, for all that’s worth to the outside world. Due to the way I structure my media-consumption time blocks, the list will always feature more graphic novels than works of prose and pure text. Novels and non-pictographic nonfiction will still pop up here and there, albeit in an outnumbered capacity…

And now, we rejoin reading time already in progress, this time with two massive collections:

18. Eddie Campbell, Bacchus (Omnibus Edition) Vol. One. The Kids These Days who are used to creature comforts such as digital downloads and computer coloring might have a hard time wrapping their heads around this, but once upon a time in the late ’80s the industry had waaaaay too many black-and-white comics. Inspired by the lightning-in-a-bottle millionaire success story that was Eastman and Laird’s Teenage Mutant Ninja Turtles, suddenly a glut of folks realized black-‘n’-white printing was cheap and anyone could slap together a “comic” and put it on sale even if they couldn’t write or draw. Most of them were crap that barely rose to the level of a high school art assignment. The preponderance of them were TMNT spoofs and imitations (the list was long and you don’t want to know). Eventually there was too much stuff for any rational consumer to support and the market went bust. The casualties were numerous and largely unmourned. Last I checked, the only companies that have survived to today are Dark Horse Comics, whose high-quality lineup soon earned enough money to afford color and never look back, and Antarctic Press, purveyors of America’s earliest OEL manga not based on existing anime.

A few gold nuggets were buried under all that dross, but were hard to find and even harder to tell apart from the crowded field unless you’d heard about them from someone else. Stuck among them, a tiny British company called Harrier Press fought for shelf space in U.S. comic shops and barely found any here in Indianapolis (and we had many more shops back then). Thanks to glowing fanzine reviews I was clued in to one such title called Deadface, in which an idiosyncratic up-‘n’-comer named Eddie Campbell told tales of the long-lived Greek god Bacchus himself. Though the rest of his Olympian family was dead, the fabled god of wine and debauchery lived to the present — to roam the planet for more drinks, to retell classic Greek myths, and occasionally to interact with the demigods and heroes still kicking around, all of them damaged goods. As a teen who loved comics, Greek mythology, and stories where Everything You Know Is Wrong, I considered Deadface a rare treasure.

Sadly, Harrier drowned in that cursed B&W glut. I never could actually find two consecutive issues of Deadface, not even in the old three-for-$1 back-issue boxes that soon became a staple at every comic shop and flea market, all chockablock with glut overstock that would’ve been worth more money as recycled goods if only paper recycling had been a thing back then. Campbell took Bacchus and his cast elsewhere for intermittent dalliances, each company seemingly smaller than the last, until he was invited to a stabler roof at Dark Horse for an extended stay. His works became slightly easier to find, but by the ’90s my reading attention was split in too many directions, and I let Bacchus slip through the cracks. My fault there. 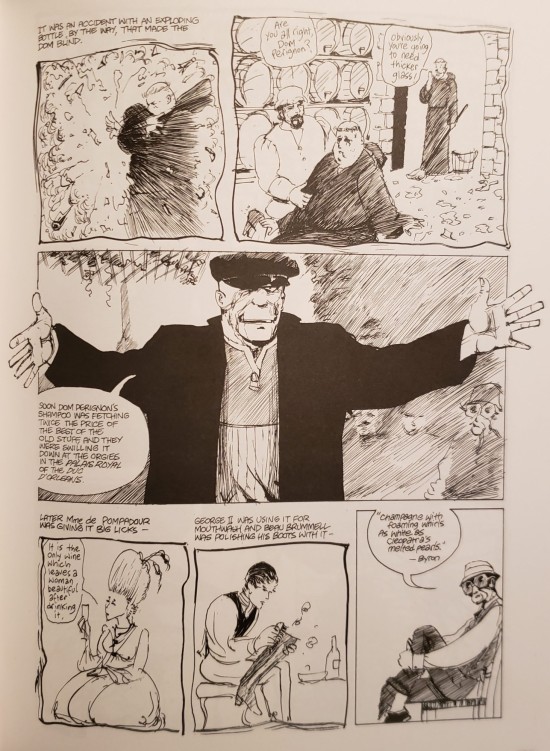 Nowadays he isn’t known chiefly as “Eddie Campbell, creator of Bacchus”, but as the artist who collaborated with legendary writer Alan Moore on his historical-horror graphic novel From Hell, later severely condensed into a just-okay Johnny Depp film. To this day it remains the most heavily self-annotated graphic novel I’ve ever read (a 42-page appendix) and the most assuredly NSFW book in our house. Though From Hell overshadows much of Campbell’s oeuvre (including his semi-autobiographical Alec series, which is differently entertaining), every last bit of Bacchus and his old drinking buddies has been collected into two phone books courtesy of Top Shelf Publishing.

30+ years after the fact, it was a nostalgic and aesthetic treat to read continuous swaths of story, not mismatched puzzle pieces of it. I could glean the gist of the narrative from the snippets I’d scrounged up way back when, but at long last I got the Big Picture of the wandering Bacchus, his formerly dead sidekick Simpson, the antagonist and ex-hero now calling himself Joe Theseus, and, irritating to one and all, the grandson of Argus and god-killer nicknamed the Eyeball Kid. While the action set pieces are very much of their time, I was more enamored of the long sequences in which Bacchus kicks back, sips in repose, and retells lost myths in his inimitably skewed fashion. And in an era where color is deemed mandatory, retreating to Campbell the artist’s vintage B&W scratchiness was like a retro catharsis, a counterbalance to today’s digitized artifices, to inorganic products far removed from the tales of Bacchus’ time.

19. Emi Lenox, Emitown: A Sketch Diary, Vol. 1. Sometimes comics made on computers can be nifty, too! My introduction to the artist was the Image Comics miniseries Plutona, a dark tale written by Jeff Lemire regarding five kids and one dead superhero. Prior to that, Lenox had worked in publishing and had been sustaining her own ongoing webcomic, a page-a-day diary about anything and everything she felt like sharing about life in Portland, comics and other fandoms. It takes commitment and creativity to produce content on that fixed schedule for any real duration. (I did the same for MCC’s first 13 months, but I was only typing, not drawing.) These 405 pages — and the fact that this isn’t the lone volume — prove Lenox has all that in spades. 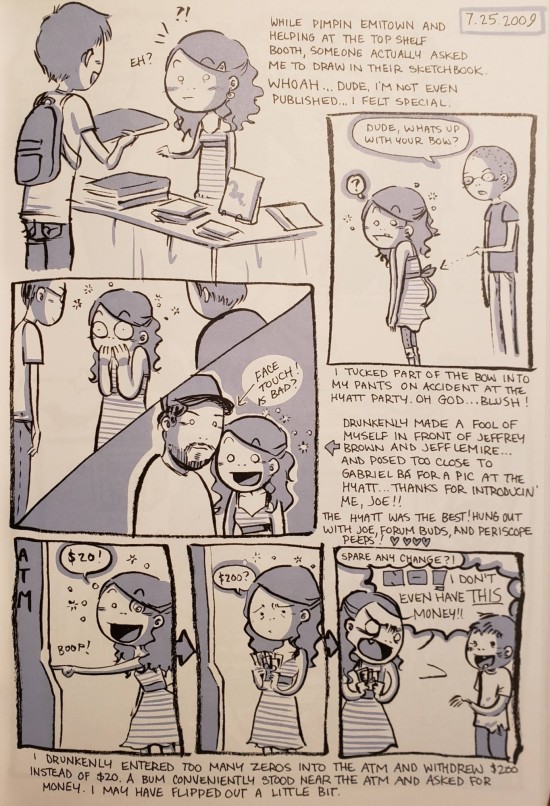 Whereas the first Bacchus tome is strictly black-and-white, Emitown is (mostly) black, white and blue. Sometimes you really don’t need thousands of color options to do arts.

This isn’t my first foray into plowing through a virtual diary, but it’s interesting to see where an artist’s mind goes over time as circumstances change, frilly flights of fancy alternate with more serious moments of emotional honesty, and following someone else’s journey reveals levels and depths that make you want to turn inward and reflect on your own. Lenox’s recurring motifs of alcohol and breakfast burritos are not ones I share (I mean, breakfast burritos are fine, just not in my top ranks), but we’re also allowed inside her days to check out cameos from the comics pros she’s met and her glimmers of success as they occur. She’s frazzled sometimes as she attempts to work her way up from lean days and leaner budgets, but she also exhibits quite the skill for capturing silver linings in a whimsical fashion. Such bursts of cheeriness can be a welcome antidote for the pervasive dread of the current climate.