The view from the Ferris wheel, once upon a time.

This week Hoosiers statewide were shocked to hear the news that Indiana Beach, our longest-lived amusement park, would be closing its gates forever. The news was especially surprising to the citizens of Monticello, IN, who had no idea it was in anything resembling dire straits. Situated along the shores of scenic Lake Shafer, it was a beloved vacation getaway whose TV ads featured a crow mascot proclaiming “There’s more than corn in Indiana!” during an era in which folks from other states wouldn’t shut up with their stupid jokes about Indiana’s ubiquitous corn. 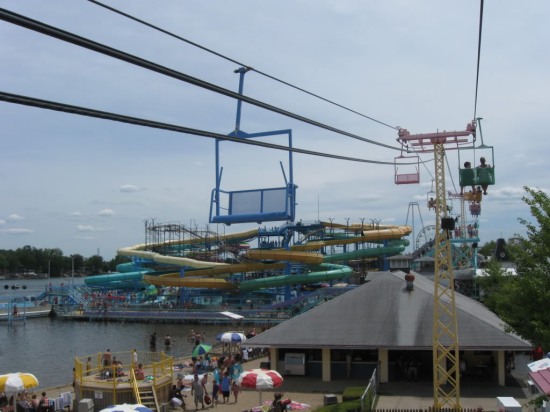 A view of some water rides from their Skyride.

At first Indiana Beach was simply what the name implies. The carnival rides and roller coasters were added slowly over time until they became the area’s biggest selling point. Back in the ’60s and ’70s they were a premier concert venue for national recording stars. Their resorts, campgrounds, and assorted neighboring businesses have been a solid community who welcomed visitors from all over our state and especially neighboring Illinois. Indiana Beach was the kind of longtime institution we appreciated having around, even those of us who didn’t actively patronize it all the time.

Lake Shafer from one of its deceptively simpler angles.

Indiana Beach was family-owned from inception to 2008, when the family sold it to an out-of-state RV company called Morgan Recreation Vacations, a.k.a. Morgan RV LLC. Located in Saratoga Springs, New York, their few remaining online traces are not charitable and they now appear to be defunct. Their parent company Morgan Management LLC has had its own unflattering issues in recent times. The next seven years under Morgan were described as “rough” in the recent Indianapolis Star by interviewee Randy Mitchell, White County’s economic development director. 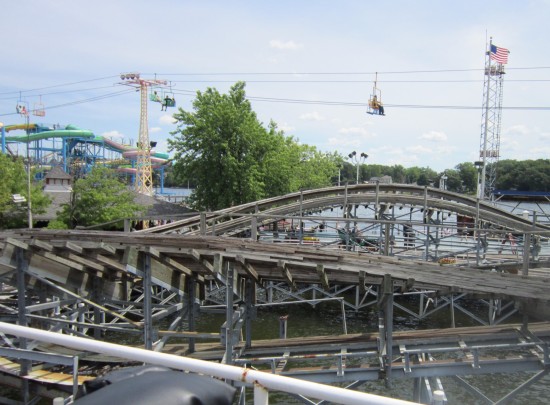 In 2015 Morgan sold Indiana Beach to another out-of-state company, a California firm called Apex Parks Group. Opened for business in 2014, Apex has acquired numerous mom-and-pop theme parks across the country in partnership with private equity firms including but not limited to Edgewater Funds in Chicago and a large DC investment machine called The Carlyle Group, who were name-checked in Michael Moore’s Fahrenheit 9/11. 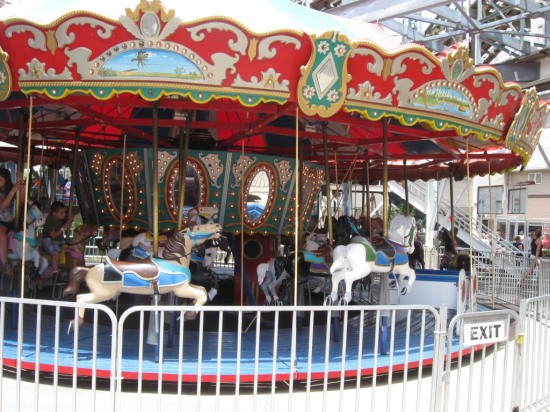 Carousels! Kids love carousels! Pity the poor horses who’ll have to be put down.

Fast-forward to 2020, and the entire community has been blindsided by Apex’s decision to close Indiana Beach. Despite one of Apex’s own VPs giving the impression that the park remained “marginally profitable”, an overriding concern was the costs of upkeep, maintenance, and/or upgrades on all those aging rides. Last year’s controversies, in which one 12-year-old died after riding one of their coasters and a second 12-year-old was allegedly injured not long after the same coaster reopened, probably didn’t help. Bottom line: although the resorts and campgrounds will live on, the theme park will not be reopening and there’s probably no point in attending the job fair they’d scheduled next weekend.

The Wabash Cannonball, a.k.a. the little engine that can’t anymore.

Indiana Beach wasn’t the only victim of the Apex axe, which has felled three other parks this same week, purportedly due to financial concerns. A couple appear to be smaller joints — SpeedZone Dallas, a Texas Go-Kart park that got mild coverage with minimal details; and Texas Arcade Boomers in Houston, whose fond Facebook farewell appears to be the extent of local inquiries on their end. 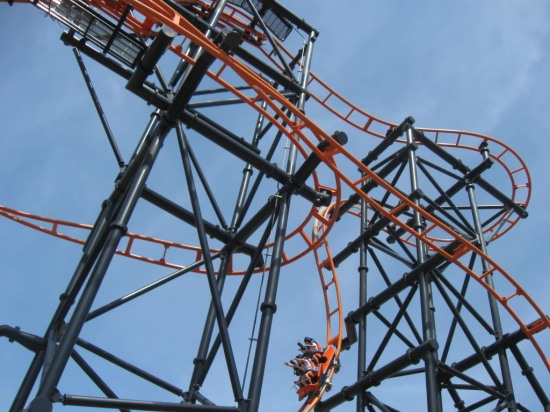 Portions of the Steel Hawg, twisted and knotty, not unlike aspects of this whole situation.

Not every fan of fairs or fun is taking the closures lying down. Out in Grand Island near Buffalo, locals have been upset for years as Martin’s Fantasy Island had been going steadily, sadly downhill since Apex’s acquisition. Frustration has now turned to fury in light of news that Fantasy Island is likewise being chopped. One New York state assemblyman channeled their community’s stunned anger into a challenging response fired off to Apex, implying Fantasy Island’s story may not end quietly. 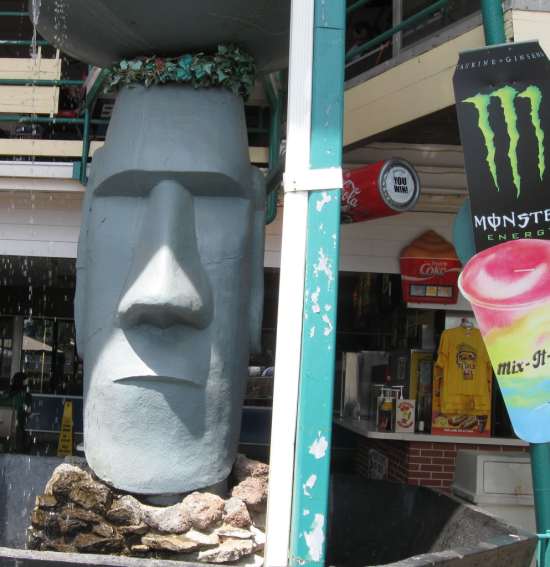 Barring a miraculous intervention — say, a cash lnflux from one of the thirty-seven billionaires currently running for public office — Monticello now faces a future without their signature festival fixtures. New mayor Cathy Gross has been quick to begin talking up new ideas for the space (I like the Riverwalk idea), assuming Apex doesn’t do something tremendously dimwitted with the land, such as sell it to one of those evil hedge funds, like the ones that murdered Sears, Radio Shack, or Toys R Us.

Water slides and coasters, living together in perfect harmony.

As you’d expect, of course there’s a petition to save the Beach. Whether a modern-day Frankie and/or Annette can step forward, galvanize the population, and turn this unfortunate situation into an end-credits dance party remains to be seen. 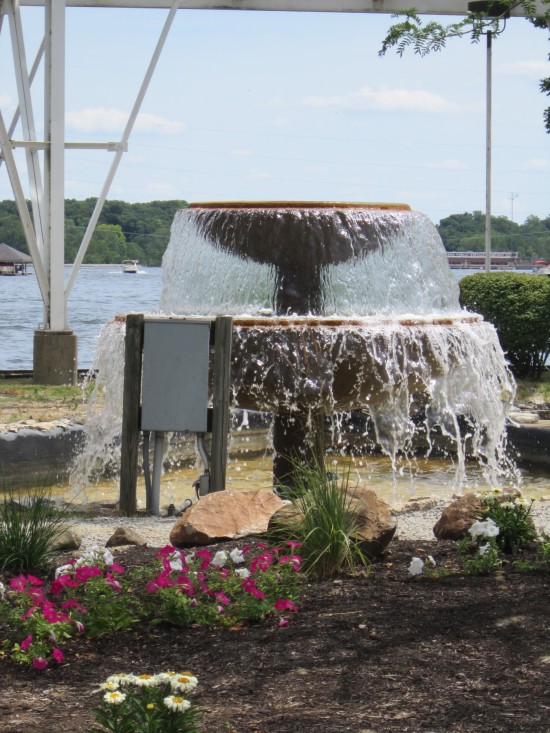 Happy fountain over by the miniature golf course.

I’d love to write a passionate, more personal defense of Indiana Beach. Truth is, I’d only been there twice — once in 2007, from which we somehow have almost no photos in our archives; and again in 2012 for a company picnic. When I was a kid, the amusement park everyone loved most was Kings Island, near Cincinnati on neighboring Ohio. Indiana Beach was cheaper and closer, but Kings Island had famous cartoon characters from the wild world of Hanna-Barbera. That was tough competition. 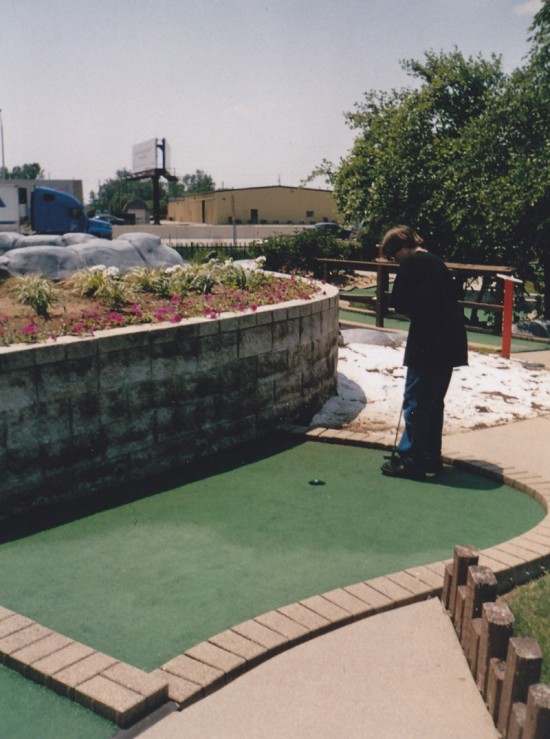 We have four photos remaining from our 2007 visit — two of my son playing miniature golf, two of him playing video games. 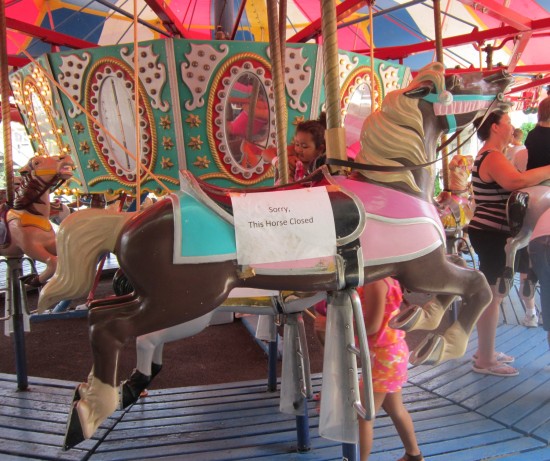 Some carousel horses had to be put out to pasture long ago. 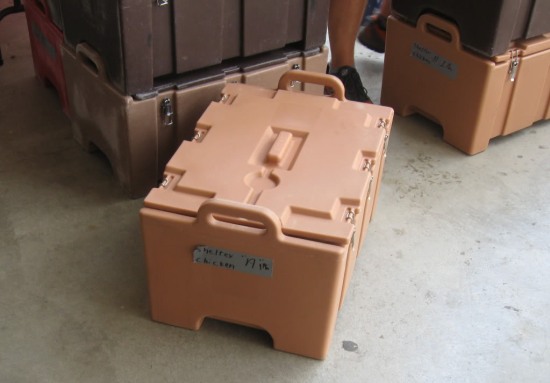 Company picnics have their attractive features. didn’t count the big tubs of “Shelter Chicken” among them.

Upon our 2007 introduction to the Beach, its vibe was not unlike a montage of Coney Island scenes from old movies and shows on celluloid. That doesn’t have to be a bad thing. We know quite a few people who loved it and are severely not happy with this turn of events. Maybe it wasn’t the greatest park of all time, but it was Indiana’s very own park. Whether out-of-state investors were the right hands in which to entrust such nostalgic legacies is, viewed with 20/20 hindsight, a question best answered with a chorus of sad trombones.

Our prayers and thoughts are with folks in Monticello this week, along with our hopes that the beautiful Lake Shafer area outlives this misfortune, outshines the responsible parties, and outlasts the fuss and furor to see better, happier times ahead.

A bridge spanning Lake Shafer, connecting various activities with or without rides. 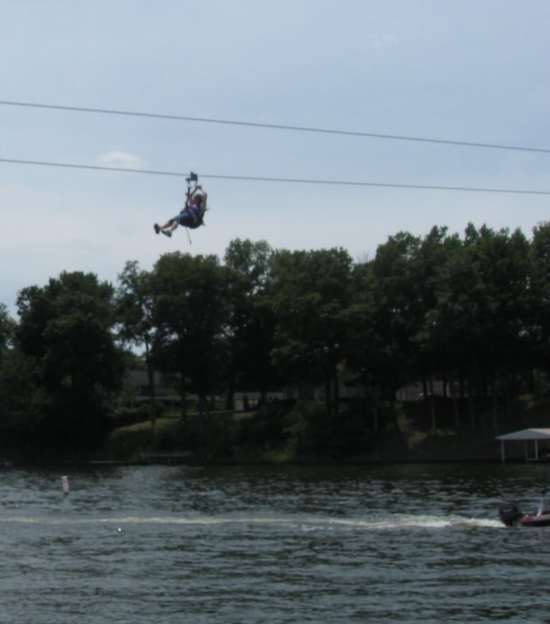 For impatient travelers: a zipline!

An alternative Batman ’66 view of that bridge.

Lakeside recreation as seen from the comfort of the Ferris wheel. 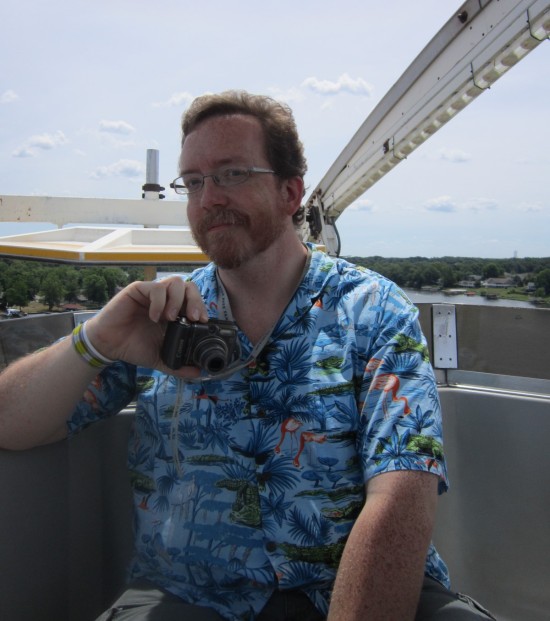 Your humble narrator with his old Canon PowerShot. Photo by my wife Anne, who took over half these photos, many of which we’d never shared online before now. 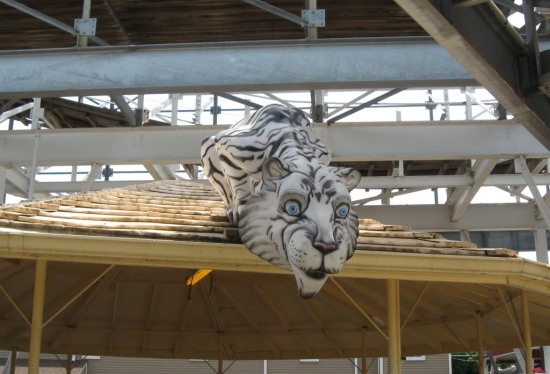 “Please don’t stuff me into a wood chipper or send me to a rundown Six Flags! Noooooooo!”