Eagle-eyed viewers used to our vacation storytelling pattern may or may not have noticed that we’ve been skipping breakfast mentions for most of this series. That ends now as we step back and cover the donut shops that brightened our mornings in three cities, plus a bonus sports donut along the way.

In a masterstroke of coincidence, we just so happened to stay in Erie on the same weekend their newest donut shop opened for business, ten convenient minutes from our hotel. Clearly our visit was meant to be. That’s their handiwork in the lead photo, in fact. 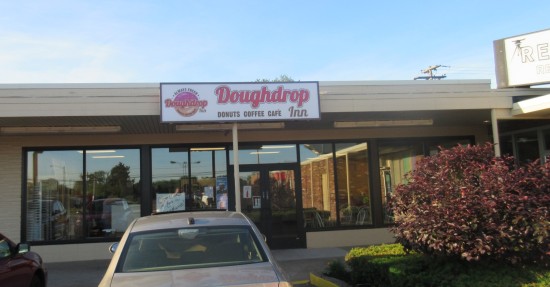 Side streets led us here on a sleepy Sunday morning without trouble. 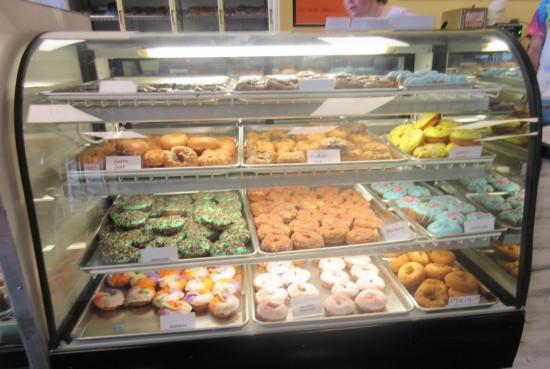 The display case that invites lingering stares and drooling. Every valid donut shop should have one. 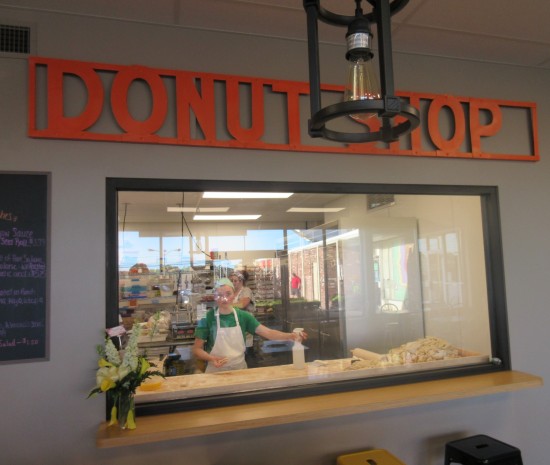 Watch the donut makers as they create new gifts from God. 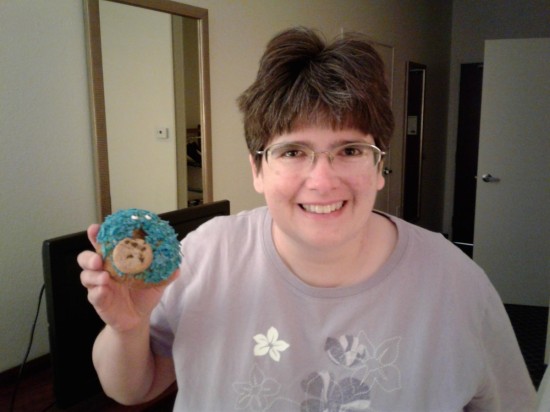 Four months after our visit, news broke of squabbles behind the scenes regarding taxes and partnership gone sour. Someone needs to fix this because those donuts deserve a long and healthy life.

Our lunch provided needed calories and shade after a long summertime walkabout, but was mostly nothing special. Tim Hortons apologists point to the donuts as one of their menu highlights. I ordered one as my dessert because I was hot and my defenses were low. They’re okay if there’re no other donuts within a mile around. In Buffalo’s Canalside area this was in fact the case.

The Sabre Dip salutes the colors of local hockey team the Buffalo Sabres.

The back of their dining room is a mini-museum for Buffalo Memorial Auditorium, the Sabres’ home rink until its demolition in 2009.

True story: in January 2018 Tim Hortons finally ventured into the Indianapolis market and built a store three miles from our house. We tried it once. Two basic breakfast sandwiches took them ten minutes to assemble. Four months later it was dead. Our reaction: dull surprise.

Our wonderful Albany hotel offered free breakfast, but we made other plans anyway. Two blocks from our hotel stood a purveyor of cider donuts, which we learned are a thing in New England. Back home in Indy, cider is what folks drink in October if they’re sick and tired of rampant, conformist pumpkin-mania. Apparently cider can also be used to make snacks. Who knew.

The only catch: braving the morning panhandler gauntlet outside.

Their hipster chalkboard menu, edgy but easy to edit.

Our last breakfast of the trip was tricky to get to during rush hour. We drove east from our hotel, had to pass the shop on the opposite side of the road, go down to the next highway exit, do a 180, head west, and then turn into their lot. It was worth the light effort. Peace, Love and Little Donuts is a chain with locations in eleven states (not Indiana yet) that will celebrate their tenth anniversary as a company in 2019. On last year’s vacation we nearly tried their shop in Morgantown, WV, but I’m glad we could finally check one out. Their wares are tinier than average — hence the name — but offer dozens of varieties. I’m not sure which specific ones we bought — Anne and I kept shouting out random names and boggling as the results added up.

…and that was the last truly awesome food of our 2018 vacation.