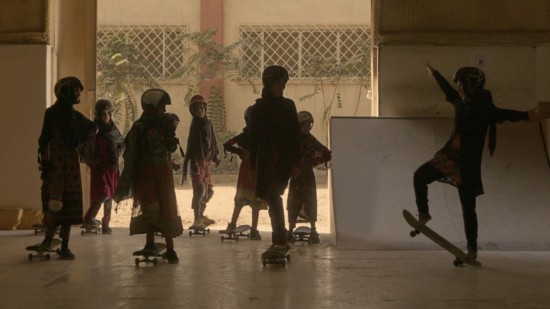 Previously on Midlife Crisis Crossover: the recurring feature that’s more like a newsletter in which I’ve jotted down capsule-sized notes about Stuff I Recently Watched at home. Picking up where the preceding installment left off, in which we covered this year’s Academy Award nominees for Best Documentary Feature but took an intermission before proceeding with these, the currently accessible Best Documentary Short Film nominees:

* Learning To Skateboard In A Warzone (If You’re A Girl) (A&E’s official site): It’s no secret that life for women in Kabul isn’t easy. Patriarchal traditions remain the rule of the land, book-learning is strictly prohibited for females, fashion is for heretics, and some sects won’t even allow them outside the house past a certain age. One radical school aims to change the story, facilitating top-secret education in math and literacy to 8- and 9-year-old girls who’ve been denied those opportunities by Afghanistan’s answer to The MAN. At the end of the day, once all the classroom sessions are done, the kids don helmets atop their hijabs, strap on safety padding over their dresses, and learn how to skateboard in a spacious, mostly wooden indoor skate park. Welcome to the schoolhouse they call Skateistan.

In this year’s most hope-filled and inspiring nominee, courageous instructors proudly defy The Way Things Have Always Been, instill intellectual curiosity, respectfully go through their alphabets and sciences and whatnot, and help a new generation of students to deal with nonsense from entitled dudes while acquiring the quality of bravery in the face of a domineering culture where their everyday scenery includes the never-ending war and intermittent suicide bombings. For those who develop the knack, skateboarding isn’t just a cool-looking hobby — it’s exhilarating empowerment.

* In The Absence (International Documentary Film Festival Amsterdam): The title tells you next to nothing until after the fact, once you realize what was missing from the disaster area. On April 16, 2014, an overloaded South Korean ferry carrying hundreds of passengers out to sea attempted too sharp a turn and capsized over the course of 2½ hours while authorities reacted with all the speed and precision of a bloated bureaucracy that had just chugged metric tons of Nyquil. Footage compiled from recovered cell phones, observing media, and civilian onlookers adds up to a morning-long kaffeeklatsch of inept inaction as agencies notify other agencies, paralyzed officials keep asking for more information, the Coast Guard takes its sweet time arriving, everyone gawks at the dying ship while wait for anyone else to make a single useful decision, and nearly three hundred passengers — most of them high school students on a field trip — stay inside on captain’s orders and collectively drown, all while South Korea’s President reportedly spent the entire day in bed.

The happier “before” scenes are hard to watch knowing the fate that would befall too many of those innocent photographers. It’s all you can do to resist punching the screen as one particular camera captures the cowardly captain and his crew being rescued and not going down with the ship, abandoning the helpless passengers they told to stay put. After the incident gained international attention, heads indeed rolled — the captain and crew went to prison, their Coast Guard was later dismantled, the word “suicide” pops up in an alarming number of “where are they now” follow-ups, and neither the Prime Minister nor the President were immune from political fallout. Avoidable large-scale tragedies are intensely more horrifying when you’re watching in real time as a self-sabotaged government unwittingly collaborates to make them even worse.

* Life Overtakes Me (Netflix): The most subdued nominee examines a peculiar, as-yet-unexplained epidemic: in Sweden, an asylum destination of choice for thousands of refugees from multiple broken countries, medical professionals have documented hundreds of cases in which children of such would-be immigrants, whether due to the psychological stress of their families’ ordeals or due to the shock of adjusting to very different environs, have slowly withdrawn from the waking world and gone catatonic. Termed “resignation syndrome”, it isn’t physiologically contagious, and yet no one knows why Sweden’s case-study count is wildly higher per capita than anywhere else.

Mournful parents recount the stories of their former homelands, some involving torture by oppressive regimes (specific homeland names are carefully omitted), in between scenes of caring for their cute but comatose kids who can’t or won’t respond to simple stimuli. Interspersed throughout are montages of beautiful Swedish wintertime scenery, wildernesses glazed in sparkling frost while nature hibernates underneath, its dormancy eventually to end on Mother Nature’s fixed schedule, while the young afflicted have no such assurances.

* Walk Run Cha-Cha (New York Times via Vimeo): Over four decades ago, Millie and Paul Cao fled Vietnam for America in hopes of starting over and finding a better, less nightmarish existence. Theirs was a life of constant rebuilding — overcoming tremendous challenges, raising kids in a world unlike what they knew, and focusing on the endless responsibilities such goals entail. All these years later…now they’ve decided it’s okay to relax, enjoy time as husband and wife, and become super awesome ballroom dancers.

Based my own anecdotal evidence of observing former elderly coworkers, retirement can be like a source of magical rejuvenation if you reach that finish line…but none of the retirees I’ve known have gone quite this far and transformed into graceful dynamos. In a world where retirement in and of itself feels like an unattainable Dulcinea, the Caos give us middle-aged stumblebums renewed hope for life after 50, love after 60, and maybe even idyllic shared happiness in our golden years.

…and, as previously discussed the fifth nominee is not yet available online through legal means because some corporations apparently hate making easy money outside New York and L.A.