Patchy the Pirate and SpongeBob SquarePants!

The proud annual tradition of the Saturday morning Dragon Con parade is definitely not a thing we can see back home at any of our usual cons. Multiple groups and organizations walk, ride, roll, and gallivant together in a united display of pop culture through downtown Atlanta. Hundreds of participants boast costumes and gear from across the wide spectrum of entertainment. The festivities draw thousands of onlookers every time — not just D*C attendees, but Atlanta citizens as well. Though the many overhead Skybridges running between buildings prohibit the use of giant floats (as we’re used to from our hometown’s own Indianapolis 500 Festival Parade), the spectacle is nonetheless a staggering feat of community and imagination.

Of the nearly 1800 photos Anne and I took over the course of our eight-day trip, roughly 400 of those were from the parade alone. Many of them are not bad. Rather than dump everything into one unwieldy mega-entry, we’ll be sharing them in manageable chunks as quickly as I can manage, given that I’m still exhausted, we have to return to our day jobs far too soon, and we have another con coming up next weekend. (Yes, already.) Not to mention I’ve some other hobbies I’ve been missing. But I’m hoping to get our parade cosplay photos posted ASAP.

A few caveats for any new readers dropping in for a visit:

1. We’re not professional photographers. We do this for fun and fandom, not for a living. We do what we can with the technology, skill sets, and opportunities we have so we can share with others. And not really in a conscious “social media influencer” kind of way. Imperfections are part of our process.

2. I take tremendous pride in accurate character naming wherever possible. A few characters in these entries may be unidentified or poorly identified because I’m old and not proficient with every universe ever. Kindly corrections to my errors and omissions are more than welcome in the comments below. I like learning new stuff. Photo captions will be amended as needed, with credit given were due.

3. With a few exceptions, these will largely be presented in random order. Anyone out there who’s looking for pics of specific parade participants, characters, or universes is free to leave requests in the comments. If we happen to have some, I’ll cheerfully add them into the next chapters. We couldn’t possibly have gotten every single person we saw that day, but we aimed for many. 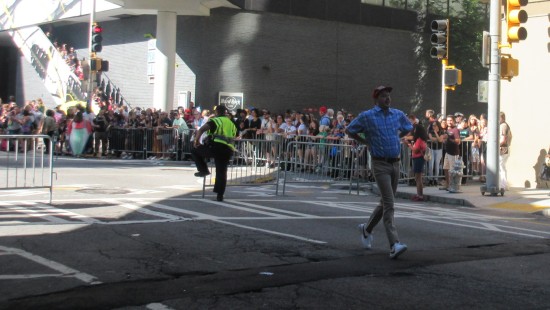 From our position by the Marriott, near the end of the parade route, we saw our first cosplayer at 10:02 when Forrest Gump ran through the final barricades. No one caught up with him for the next several minutes. 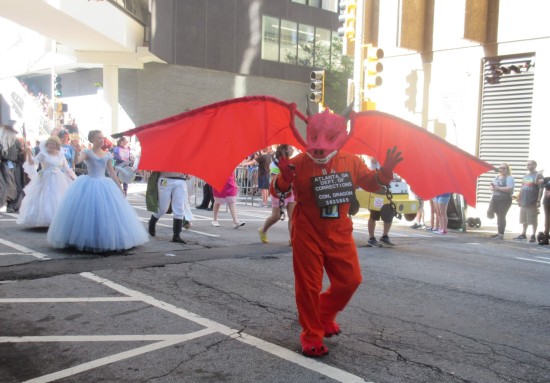 A dragon who is a con. I SEE WHAT THEY DID THERE.

Not a costume, but the parade’s own Grand Marshal Mark Sheppard from TV’s Supernatural, Leverage, Firefly, and more. 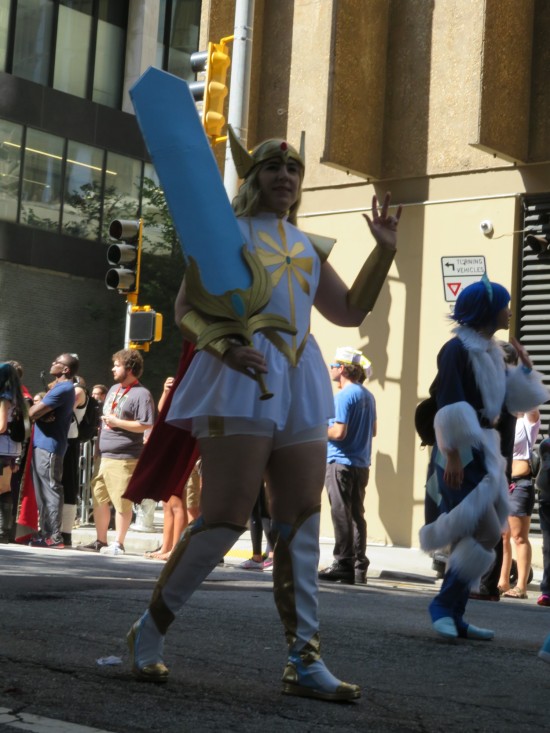 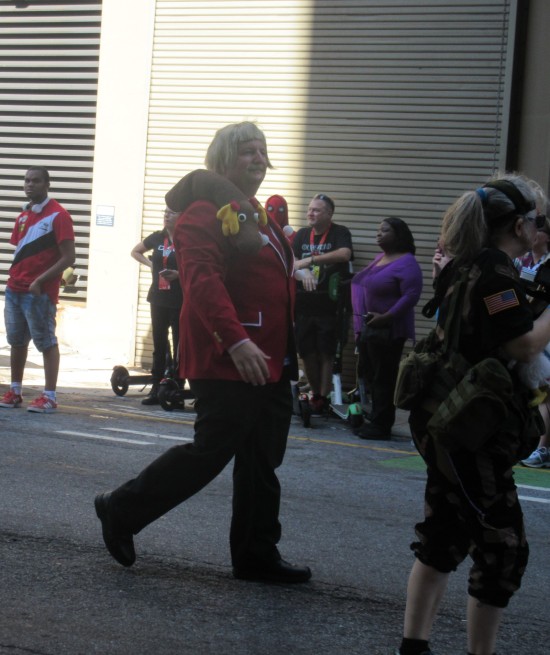 Straight out of my childhood, kiddie host Captain Kangaroo and his puppet pal Mr. Moose. 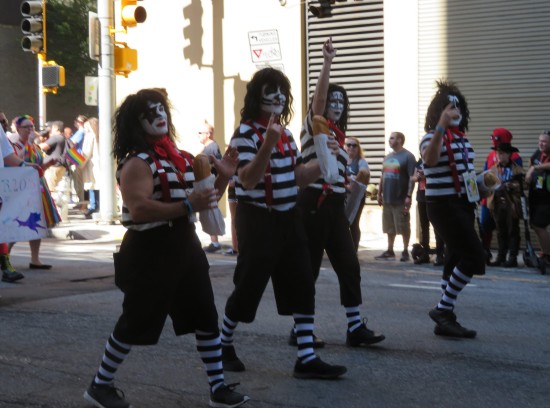 Animal from the Muppets, one of many musicians on hand from Seed and Feed Marching Abominable, a local band that thrives on this sort of event.

Mad-Eye Moody, much happier here than he ever was at Hogwarts.

Professor McGonagall says hi to the kids sitting on the curb in front of us. 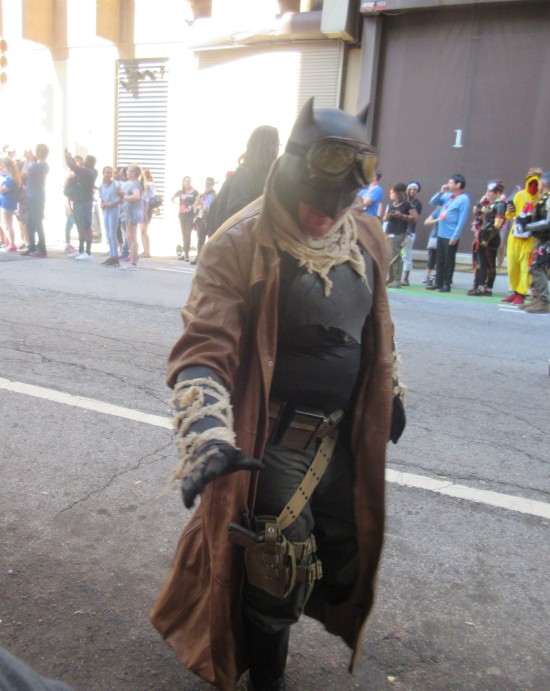 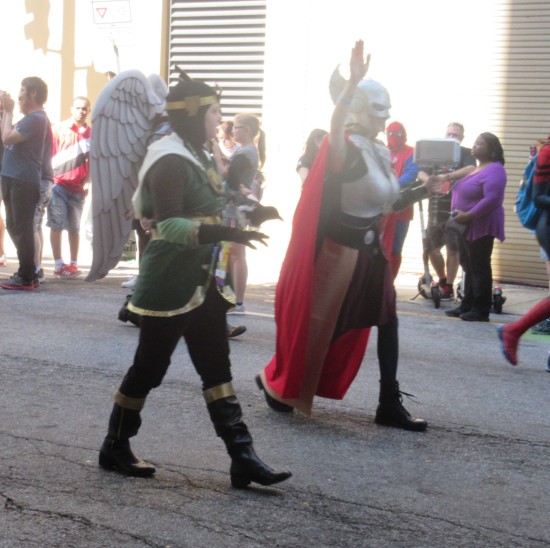 Kid Loki from Marvel’s top-notch Journey Into Mystery and Jane Foster a.k.a. Thor. 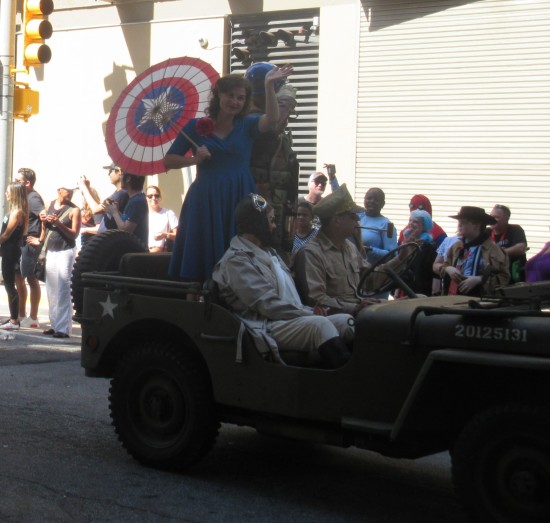 Peggy Carter and the boys from the war front. 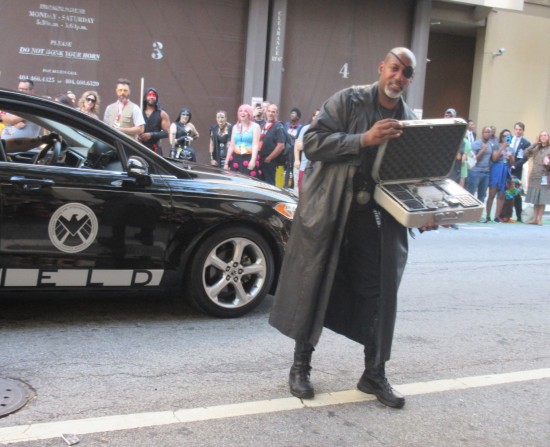 Nick Fury reveals the Tesseract. Usually he’s terrible at sharing intel, but he trusts these parade watchers to keep a secret. 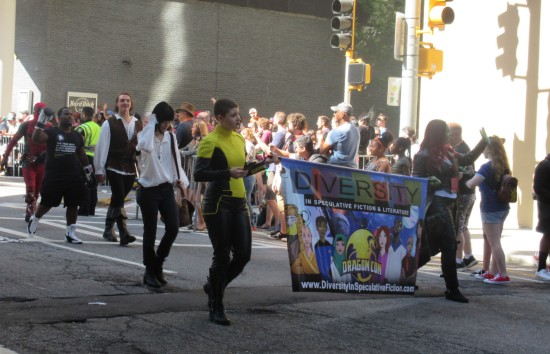 Dune sandworm, giving me flashbacks to my own Dune theatrical viewing experience. D*C’s version is better. 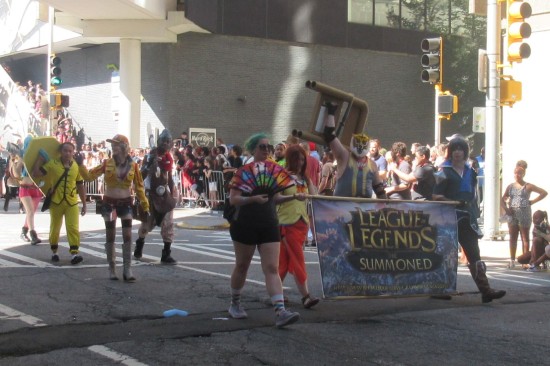 Fans supporting League of Legends, a MOBA game I first learned about after our first encounter with LoL cosplayers at Gen Con 2012. 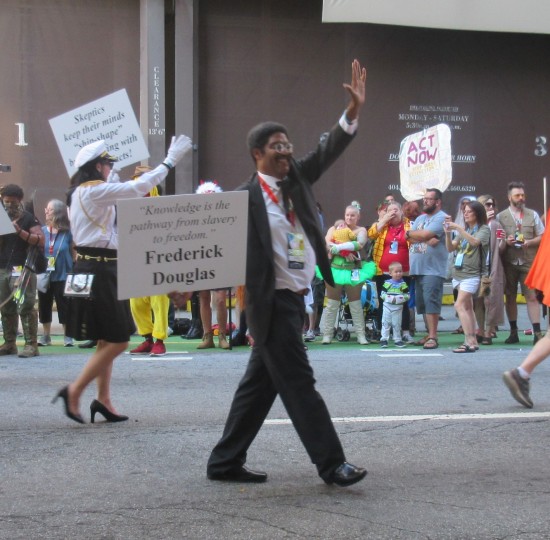 Frederick Douglass, one of several historical cosplayers. MCC readers may recall we visited his gravesite in Rochester, NY, on last year’s road trip. 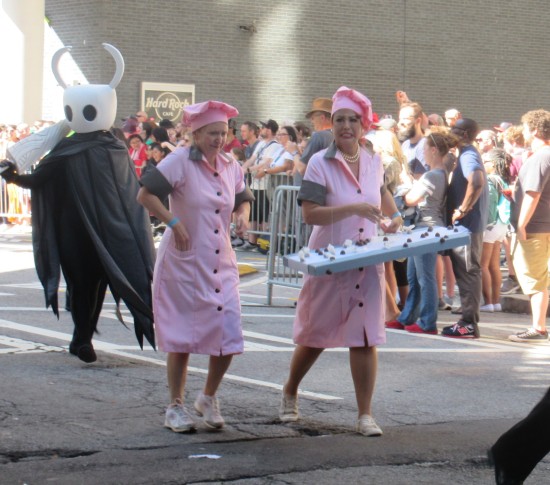 Lucy and Ethel and the vexatious chocolate conveyor from the classic I Love Lucy episode “Job Switching”.