Rocket Raccoon: the Cookie! Northbrook bakery Max and Benny’s had a booth selling cookies shaped like numerous characters and personalities. My wife and I split a cookie shaped like Star-Lord’s head. It was great and I wish we’d bought a few dozen more.

This weekend was that time again: our annual excursion to Rosemont, IL, for Wizard World Chicago. My wife and I took plenty of photos as usual, many of them usable. We’ll be sharing those over the next several entries…

…blah blah blah blah blah. And now it all comes down to this, Part Seven, the not-really-grand finale: non-living objects and items that caught our eyes on the premises. 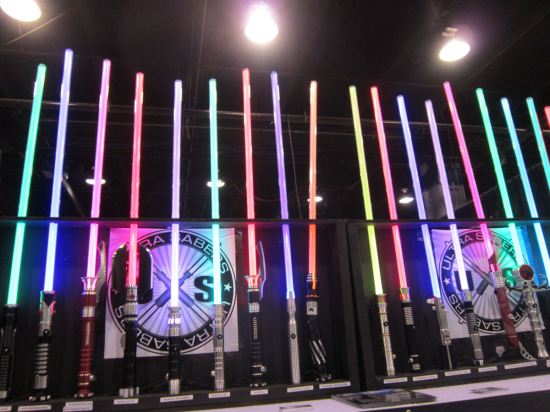 Fez-O-Rama, a west-coast company that sells exactly what you see here, were also at Gen Con the week before. Sure, you could wear a plain red fez like the Eleventh Doctor did a couple of times, or you could work with Fez-O-Rama and find something with style.

If you’d told me twenty years ago that a fez would be in my future, I would’ve called you crazy and asked you to stop joking about impossible futures. Who’s crazy now, young-Me? WHO’S CRAZY NOW. 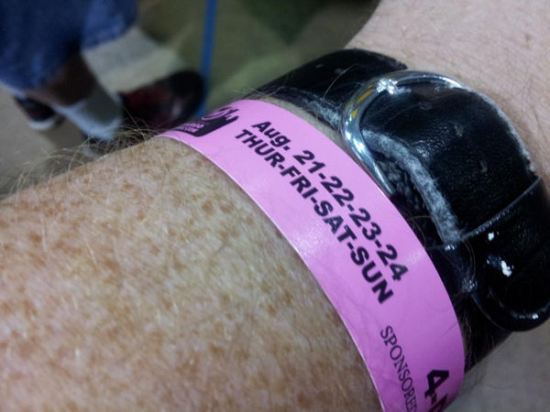 I don’t know what’s cool or uncool in headgear these days (beyond a recent surge in internet snark about fedoras), but a fez is a much better accessory than a plastic four-day admission wristband. If you bought a Wizard World VIP package, you were given a nice badge on a lanyard to wear. The rest of us were cursed to wear one of these disposable manacles for the duration of the weekend, even when we weren’t at the con. These quickly became ugly irritants.

For a few longtime MCC readers: behold the only surviving piece of merchandise from NBC’s now-canceled Revolution: a souvenir San Diego Comic Con 2013 bag! A great carryall for toting around your books and papers on those one-hour, thousand-mile walks.

Stuffed Yoshi is so darn cute. Sometimes it’s the simple merch that amuses us. And sometimes we like photos filled with Easter eggs. Many photos have some.

Chibi-headed Eleventh Doctor! I’m sure you could fit a fez on it.

I suppose you could also plop a fez on the head of this Tenth Doctor standee, but that would make no sense and muss his precious cardboard hair.

The top half of Peppermint Monster’s table/kiosk in Artists Alley. Never have such piercing eyes been so minty fresh. 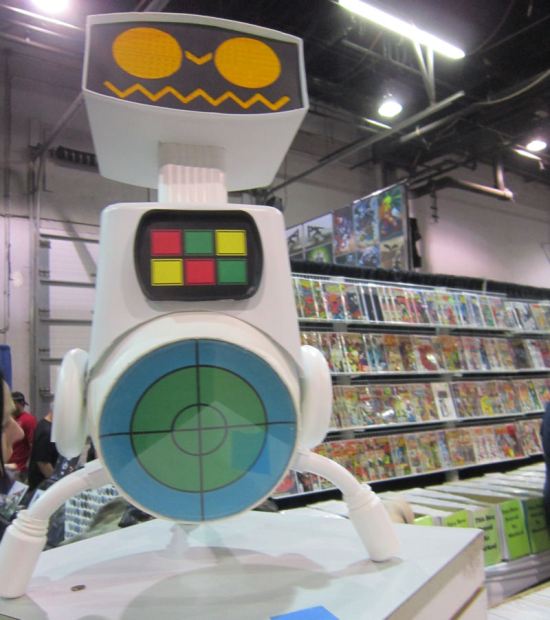 H.E.R.B.I.E. the Robot, costar of the 1980s Fantastic Four Saturday morning cartoon. Kids, ask your parents about those dark times when the Human Torch was considered Too Hot for TV.

Buck Rogers’ old sidekick Twiki had a booth all to itself. No table, nothing to sell, no autographs offered. Just Twiki, a mysterious URL on the wall, and some tape on the floor encouraging photos for some reason. Someone should go visit that URL and let us know if anything happens there.

During the futile minutes we spent in the Evan Peters autograph area, at one point this lady with an evil cat puppet walked up to our quote-unquote “line” and made it do evil cat things. She said things to the young ladies standing in front of us, but I heard none of them. Then she moved on and now we’ll never know what the heck this is.

A common site in the autograph area: whenever something unusually exciting happened, you could tell because it was immediately surrounded by wave upon wave of arms holding cameras and phones aloft. If only we could collect copies of every photo taken at this very moment, we could make a keen flipbook. 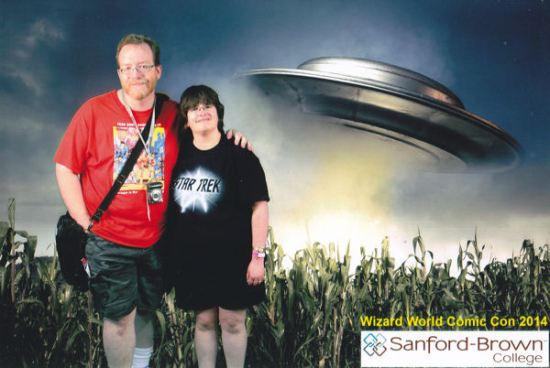 …and there you have it. The End.

Now if you’ll pardon me, I’m gonna go spend the rest of Labor Day weekend sleeping off this unshakeable case of Con Crud that’s been dragging me down all week long. See you next year!