President Jimmy Carter and his wife Rosalynn on the January 1977 cover of Punch shortly before his inauguration. Art by Wally Fawkes, a.k.a. “Trog”.

Sure, you could Google parodies of Grant Wood’s American Gothic and see six million of them online, or you could support the arts by driving hundreds of miles and paying museum admission to see a fraction of them in person. Well, not the original artwork itself, mind you, just old copies of the publications and merchandise that have used some. And one monitor slideshow of countless others, some copied-and-pasted from online and others possibly drawn by local DeviantArt account holders for fun. But that still counts as an art exhibition of sorts, I rationalize.

END_OF_DOCUMENT_TOKEN_TO_BE_REPLACED

Previously on Midlife Crisis Crossover: a flashback to our second annual road trip, attending St. Louis’ second and final Gateway Sci-Fi Con in the year 2000. Actors from Mystery Science Theater 3000 were met, autographs were treasured, panels were enjoyed, and dozens of internet peers showed up to put faces with names. But we didn’t limit ourselves to the convention hotel’s property. None of us were from St. Louis; some of us were eager to explore and see what else the city had to offer.

Fate brought us to a saloon called Trainwreck on the Landing. Other Trainwrecks have existed in the 314 since the 1890s, but we knew nothing about any of them. We figured why not and gave it a whirl.

Hated it. We hated it so much, I wrote a skit about it four days later.

END_OF_DOCUMENT_TOKEN_TO_BE_REPLACED 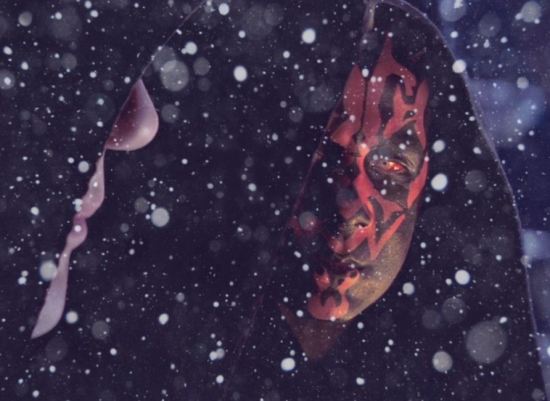 [DIRECTOR’S NOTE: The following Christmas poem, written by Star Wars fans for Star Wars fans, works best if read in the deep, laconic manner of Boris Karloff, James Earl Jones, Keith David, or Epic Voice Guy. As this piece hews more closely to the original book than to the Chuck Jones animated adaptation, we leave it to the individual reader to invent and insert musical numbers at their own discretion.]

Every Jedi down on Coruscant liked Christmas a lot
But the Emperor, who lived just this side of Coruscant, did NOT!
The Emperor hated Christmas! The whole Christmas season!
Now please don’t ask why. He’ll kill you without reason.
It could be that electricity in his eyes was too bright.
It could be, perhaps, that his robe was too tight.
But I think the most likely reason of all
Was that his heart was two sizes too small.
But whatever the reason, his robe or his eyes,
He stood there on Christmas Eve, hating Jedis.

END_OF_DOCUMENT_TOKEN_TO_BE_REPLACED

Saturday my wife and I will be checking out the inaugural Awesome Con Indianapolis down at the Indiana Convention Center. Awesome Con will be our sixth convention this year, but we have high hopes that this experience will find its own positive form of uniqueness. The guest list isn’t too lengthy or overwhelming, and contains quite a few names we’re excited to meet. We presume there’ll be nifty new things to buy, too.

Now it’s Friday night and I’m still not ready. I’ve had a busy week (not all of it was my fault) and my attention span has been stretched to its limits in myriad directions. I’m really trying to concentrate and prepare for our big, fantabulous day of walking, shopping, walking, meeting, walking, cosplayers, walking, potentially talking to someone, and after that some more walking because my free parking is several blocks away. But I needed to unwind first before I could resume researching.

END_OF_DOCUMENT_TOKEN_TO_BE_REPLACED

Once upon a weekday dreary, one that ended with us bleary,
Still we persevered to complete every forgotten chore
As my wife, who got home first, often has the workload worst
Let out the dog before he’d burst, burst right through the door
“Hold on, already!” she muttered, “First let me at the door —
Then you’ll go, and not before.”

For dog’s sake she flung the entry, when, while standing there as sentry,
Nearby hung a praying mantis about as tall as Tipper Gore
Perhaps a slight distortion make I, but it looked her in the eye
It, with mien of calm and cool, perched right on our outer door —
Perched upon the squeaky hinge that held fast our outer door —
Perched, and sat, and nothing more.

END_OF_DOCUMENT_TOKEN_TO_BE_REPLACED

If only the blackout hadn’t canceled all Presidential debates, “Bass” Monroe could be rocking the podium.

Careful students of their cable TV channel guides, as well as viewers who paid attention to last week’s ending promo, already know that NBC’s Revolution is on vacation this week, preempted by the third 2012 Presidential debate, which is bound to generate higher ratings and almost as much Internet nitpicking. I have no idea why I should allow this skip-week to stop my weekly recap fun. With days to while away until next week brings us episode six (entitled “Sex and Drugs” according to NBC.com), the following is my idea for what this week’s episode might look like if it existed. Please enjoy fake episode 5½, entitled “The Body”.

Scene 1: Open on a knock-down drag-out melee between Our Heroes and a horde of sword-wielding hobos inside a spacious, empty indoor set. Miles takes them down three at a time. A heavily bandaged Nora is reduced to slaying only one at a time. Charlie is struggling with one grimy, 350-pound lout who refuses to let go of her crossbow and is shouting ugly sexist epithets. Aaron is hiding outside behind a bush, watching everyone’s backpacks. Charlie slips and falls backward. Her aggressor raises her crossbow above her head, poised to strike. Five-second “REVOLUTION” title card rolls.

Scene 2: “TWO HOURS EARLIER…” says the caption. In the hour that’s passed since last week’s train job failed, Our Heroes have only walked as far as Dayton, Ohio, some 110 miles east of Noblesville. Nora’s massive stab wound is clearly slowing down their progress. Miles decides they can’t go on like this and she needs a stab-wound specialist. He knows a former friend in Grand Rapids who might be able to help. Charlie is torn between continuing their trek to rescue her brother Danny in Philadelphia, or losing yet another female cast member. Grand Rapids it is, over 300 miles northwest of Dayton.