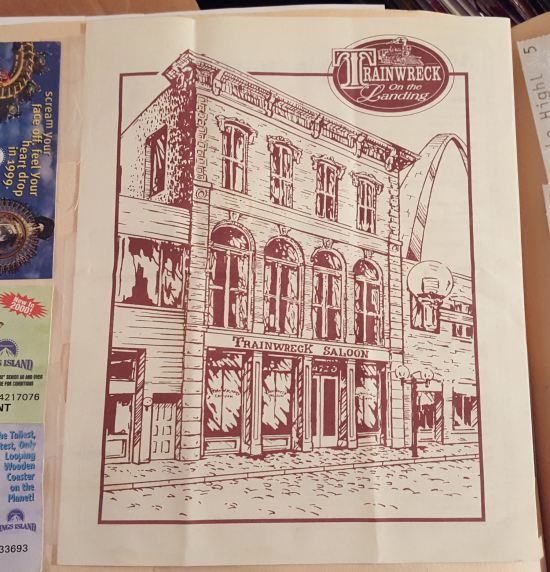 Previously on Midlife Crisis Crossover: a flashback to our second annual road trip, attending St. Louis’ second and final Gateway Sci-Fi Con in the year 2000. Actors from Mystery Science Theater 3000 were met, autographs were treasured, panels were enjoyed, and dozens of internet peers showed up to put faces with names. But we didn’t limit ourselves to the convention hotel’s property. None of us were from St. Louis; some of us were eager to explore and see what else the city had to offer.

Fate brought us to a saloon called Trainwreck on the Landing. Other Trainwrecks have existed in the 314 since the 1890s, but we knew nothing about any of them. We figured why not and gave it a whirl.

Hated it. We hated it so much, I wrote a skit about it four days later.

The following segment was originally presented online July 19, 2000, specifically written for an audience of MST3K fans who knew and appreciated the shenanigans of its two most prominent bad guys, Dr. Clayton Forrester and his henchman TV’s Frank. It was posted on Usenet, a primitive precursor to message boards and Facebook that wasn’t equipped for anyone to use bold or italic tags, had no means for sharing or attaching images or photos or even video, and certainly wouldn’t let anyone use memes to do all their talking and joking for them. The word “meme” wasn’t even a thing yet. Usenet was a pure, simple, lo-fi all-text medium where the only allowable tools in your toolbox were letters, numbers, typewriter symbols, ASCII characters, and whatever style and wit you brought with you. You had to do the best you could with what you had to work with.

Strictly speaking, this piece qualifies as fanfic, but a ridiculous number of elements were based on a true story, by which I mean it was our collective restaurant review. And it’s a weird time capsule of where my writing was at as of 2000. If you’re up for a refresher on the comedy stylings of the Mads, have some YouTube samples here and here and here.

If you recoiled at any sentences in the two preceding paragraphs, I’ll understand if you skip the entire section between the two asterisk fields and I’ll meet you back at the wrap-up for a quick round of “Whatever Happened to…?” Less than 1% of the original post has been edited to meet current MCC standards. For anyone who cares about continuity, this segment is set anytime after MST3K’s season-10 premiere.

DR.F: Greetings, kiddies. Y’know, we’ve had a long, hard road to walk in the last several years. I was transformed into a Kubrickian metaphor…

FRANK: And I’m a Soultaker now! The scourge of young promiscuous teens everywhere! And an honorary Sheen, too.

DR.F.: Cork it, President Killed-Again. Yet, despite the luxuries we enjoy in our current positions — I, for one, in my new form, am up for the lead in “Baby Geniuses 2″…

DR.F: — we’re broke. Or, at least, we *were*, until our latest endeavor bore fruition. Welcome, if you will, to our very own…

DR.F: [to Frank] Put a sock in it, TGI-Fryboy. [to audience] Behold! Two stories of nothing but quasi-rustic, wood-paneled faux-Western decor! The same kind you see in thousands of saloons across the continent, only this is, ah, DIFFERENT!

FRANK: Except this one wall over here. It’s not wood.

FRANK: And I painted it lime green. The whole wall. Top to bottom. [shrugs] Seemed like a good idea at the time. I just had a can of this lime green pant lying around, and so I —

DR.F: [simmers visibly, then straightens up and clears his throat] Ahem. Anyway…behold! All your favorite animals stuffed, mounted, and displayed for your own dinnertime ambience! And not just deer heads, although we’ve got those, too! Marvel at our stuffed beaver, staring at you from a glass case a mere four feet away from your own table!

FRANK: Over on the opposite wall is my own pride and joy — five large-mouthed bass dangling from a chain. A shame I ran their batteries down…

DR.F: Of course, we offer none of these as actual menu items. [walks over to a round table surrounded by seven unsuspecting patrons] Behold! A typical dinner at…Trainwreck on the Landing! [bends over to smirk at the customers] And what sort of appetizer are you enjoying there?

[Dr.F quickly steps between the viewer and Diner #2.]

DR.F: Uhh, here, have some chicken wings. We’re required by law to sell these. Bon appetit.

DINER #3: What kind of soft drinks do you have?

FRANK: Coke, Diet Coke, and Sprite, the minimum number of brands required by state law. Believe you me, we’d carry less if we could.

FRANK: [pops back onscreen, smiling widely] Anyone for refills?

DR.F: Yes, here at Trainwreck on the Landing, we’re dedicated to upholding the many traditions of those bar-n-grills that came before us. For instance: Live bar music!

[A spotlight appears on a Typical Bar Band, loudly desecrating a typical classic rock song, something Seger-y or Wilbury-esque, but with any remaining funk drained out of them. Diners #1, #2, #3, #4 and #6 wince visibly.]

[Several indistinguishable blurs of light move past the table, making race-car noises as they zoom along. The diners can only stare helplessly.]

DR.F: We, of course, feature a wide variety of side dishes!…

[While Dr. F is talking, Diner #1, Diner #3, and Diner #7 each look at each other. They begin shuffling their side dishes back and forth between each other in a flurry of motion. One side dish, identity unconfirmed, stands alone in the middle of the table afterward, wisely untouched.]

DINER #2: There’s more seasoning in these things than actual potatoes!

[Dr. F and Frank look at each other, begin laughing menacingly. Diner #2 suddenly finds his hands entirely covered in “seasoning”, which threatens to consume him whole like a swarm of deadly bees.]

DINER #1: Can I ask some questions about some of these menu items?

DINER #7: Can we get separate checks?

DINER #2: [Having used intense Napkin-Fu to rid himself of the Killer Seasoning] Um, the menu clearly states that my, um, “bison burger” is supposed to be 1/3 of a pound, but look at this. [Holds sandwich up to camera. Meat is approximately the size and shape of a small Vaseline lid.]

DINER #2: My sandwich has more lettuce than meat.

DR.F: [Takes a scrap of paper out of his pocket.] Thanks for coming! Here’s your receipt. Just in case you get any funny ideas, we’ve already added in a GENEROUS tip for ourselves.

FRANK: I’m saving up to buy the new Eve 6 album!

DINER #1: Your menu states that tips will only be added on for groups of eight or more.

FRANK: Ha HA! Your math is useless against us!

DR.F: Look, just give us the money or the band starts on the Foghat catalog!

DINER #1: Is there a manager I can speak to?

FRANK and DR.F: (together) What do you want from us? We’re EVIL! EEEEEEEVIIIL! [Both turn back toward the camera. While Frank and Dr. F speak, the diners empty their pockets out, leaving the precise total of their meals to the very last penny, then run for their lives.]

DR.F: So. Trainwreck on the Landing. Where else can you get the authentic American bar experience AND watch casino riverboats drift by peacefully? Drop in, won’t you?

FRANK: Actually, that one over there is just a plain ol’ boat souped up with some fancy attachments. But you know they got a heck of a band!

DR.F: FRANK! [Shoves Frank out of the way, pushes The Button.]

AND AS THE DINERS:

SPECIAL THANKS TO:
The citizens and merchants of LaClede’s Landing
MSTies everywhere, especially RATMM
The stupid cabbie who honked at me
The authors of the 1st Amendment
The inventor of the cobblestone

The preceding program was based on actual events. No diners were permanently scarred during the making of this episode. The diners were later discovered alive, unharmed, and of normal size several hundred miles away.

The worst part is, this was my first bison burger. I’ve had a few since then, all of them better.

The highlights of the evening: (a) the good company who put up with us; and (b) walking up to the Mississippi itself, though we couldn’t find an access point that would let us near enough to touch it, much to Anne’s consternation.

Other Trainwrecks live on elsewhere in the city today, but this particular Trainwreck was shut down sometime before August 2006. Some additional digging has uncovered other establishments that have used the same space over the years — the Feisty Bulldog (closed August 2008), a nightclub called Throttle (closed sometime before January 2011), and, most recently, Marcel’s Restaurant & Bar (closed by January 2016). A few sources indicate this modest piece of discarded Americana could be yours if you have $650,000 and a better idea in hand.

This on-location flash-forward is brought to you by Google Street View. It’s everywhere you don’t want to be.