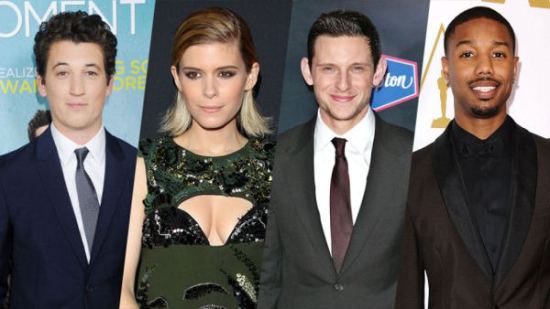 Today the internet exploded once again (it seems to do that a lot) after hearing the news that Fox had completed casting of the primary roles for their Fantastic Four reboot, scheduled to hit theaters June 19, 2015. Unfortunately Fox forgot to ask the fans to approve their choices first and decided to make its own decisions like an independent adult. The internet responded by leaving nasty notes in Fox’s locker and spitting on its cafeteria pizza at lunchtime.

Fans who feel sole ownership of an intellectual property that’s been around for fifty years unanimously agreed everything about the four actors seen above is wrong. Reed Richards absolutely, positively must be middle-aged. Ben Grimm must begin as a muscular guy, because medical science has proven cosmic rays can’t possibly turn a short, thin guy into a giant rock monster. Johnny Storm has to be white, because all siblings in all Creation have identical skin tones. Sure, Jessica Alba wasn’t white in the last two movies either, but This Is Different. Thanks to these complaints, Fantastic Four has already been given a 5% Rotten rating on the Tomatometer sixteen months before release. That’ll show ’em.

END_OF_DOCUMENT_TOKEN_TO_BE_REPLACED

I brake for far fewer movie-news articles than the average geek. I still like movies, but what passes for movie “news” nowadays generally doesn’t merit my time or clicking because the majority doesn’t meet my minimum specifications for “news”. I have no vested interest in following the full life cycle of every production from germination-of-idea to perennial-AMC-airings.

I can think of numerous examples off the top of my head for most steps of the filmmaking process and marketing campaign. To illustrate my apathy, let me walk you through the vantage point of internet news outlets — not official sources such as The Hollywood Reporter, Variety, or Nikki Finke, but the other guys. Pretty much all the other guys.

For the sake of argument, let’s pretend the following examples revolve around a remake of the 1975 police drama Mitchell, which starred Joe Don Baker as Oscar Madison from The Odd Couple, plus a gun, minus friends. Let’s pretend we’re in a near-future dystopia in which Hollywood used up its first 5,000 ideas and the only things standing between us and the bottom of the barrel are Mitchell and The Snorks. And James Cameron already has plans for the Snorks.

END_OF_DOCUMENT_TOKEN_TO_BE_REPLACED

Prove it’s true, you ask? I say, prove that it’s NOT true! Because impeccable internet journalism.

You love him in TV’s Sherlock. You thought he was one of the best things in Star Trek Into Darkness even though he straight-up lied to the press about his character. You were annoyed by his ten-minute role in War Horse despite having no idea who he was at the time. You’re looking forward to his dual roles in Peter Jackson’s overextended Hobbit trilogy. You’re undecided about watching him play Alexander Godunov in The Fifth Estate. You noticed his name in the fine print for August: Osage County and are weighing your options.

Today is now the best day of your week because the internet has collectively decided to buy into the sketchy rumor that Benedict Cumberbatch, England’s second-biggest export of the decade after One Direction, has allegedly been cast to play an unnamed role in JJ Abrams’ still-untitled Trek sequel, Star Wars Episode VII. On a normal news day, your competent aggregator sites and discerning bloggers prefer to wait for official word from the likes of Hollywood Reporter, Variety, Deadline Hollywood Daily, or from TV news a full two months later. Sometimes, though, some headlines are just too awesome for professional composure or baseline fact-checking. Thus, this gossip is popping up everywhere today.

Along those same lines, I’ve decided to announce the nonexistent, completely unfounded, nonetheless tantalizing rumor than Cumberbatch has also signed on to give life to the role of brave Sir Johan in Smurfs 3. Just because I can, and clearly because we geeks now demand that he star in everything ever hereafter.

END_OF_DOCUMENT_TOKEN_TO_BE_REPLACED

Who wants a copy of my audition reel? Show of hands? (photo credit: GabboT via photopin cc)

It is written! Hollywood Reporter and other official sources have confirmed the Bat-hunt is over: Academy Award Winner Ben Affleck will be following in the footsteps of Christian Bale as the new Batman in the still-untitled DC film, allegedly a Man of Steel sequel even though Batman has more box-office clout, sells more comics, and inspires funnier memes.

END_OF_DOCUMENT_TOKEN_TO_BE_REPLACED

Once Upon a Time was originally written off by Internet comics fans as an alt-world version of Bill Willingham’s Fables, but felt no slings or arrows as it became ABC’s highest-rated new drama of the 2011-2012 season. The complex saga of fairy-tale characters trapped in the modern world without their memories was a nonstop roller coaster that leavened linear storytelling with non-linear flashbacks and delved into themes of identity, belief, vengeance, betrayal, and true love. The basic cast of Snow White, Prince Charming, their long-lost adult daughter Emma, her forsaken son Henry, his adopted mother Mayor Evil Queen, and her ally/nemesis/ally/nemesis Rumpelstiltskin were joined each week by a strong, nuanced supporting cast who each had a turn living out their origins and defining their roles in the scary new world of quaint little Storybrooke.

The happy news three weeks ago was that Meghan Ory’s Red Riding Hood (a.k.a. Ruby the world’s greatest detective who’d rather be a waitress) would be upgraded to full-time regular status in season 2. This week Entertainment Weekly brought announcements of two more recurring characters being added to the show, neither of whom I’ve ever watched in anything: Jamie Chung as Mulan and Sarah Bolger as Sleeping Beauty. Those two are in addition to already existing recurring characters Dr. Jiminy Cricket, Ruby’s grandma restaurateur, the Blue Fairy, Amy Acker’s other fairy, the madder-than-mad Mad Hatter, Sidney Glass the queen’s tool, August “Pinocchio” Booth, the tormented Belle, my personal hero Grumpy, the blondish doctor who has yet to reveal his true Disney name, and a handful of other one-shot Disney properties such as Maleficent and Pongo.

I trust the showrunners know what they’re doing and will be adding new characters organically as the flow of the season allows them, rather than cramming them in all at once as if the series were a virtual clown-car of corporate merchandise mascots, all suffocating each other as they vie for our attention and the approval of their Disney overlords. I can only imagine this trend taken to an extreme as we run out of princesses by season 4 and have to start scraping the Disney barrel for too many unnecessary live-action reboots. The possibilities for casting and subplots abound:

* A Hawaiian girl named Lilo with a most exotic pet.

* Chernabog from Fantasia as the season 3 Big Bad, having conquered and assumed control of Fairy Tale Land while Mayor Evil Queen has been in absentia.

* Pocahontas as a lawyer representing for Storybrooke’s minorities and/or environmental causes, switching specialties every other episode for plot needs as TV lawyers are wont to do.

* Bob Newhart and Zsa-Zsa Gabor reprising their roles as Bernard and Bianca, now retired adventurers who bicker sweetly while their rambunctious brood carry on the family business.

* Don Novello resumes as the demolitions expert from Atlantis: the Lost Empire, except now clad in his old Father Guido Sarducci costume.

* Aladdin’s magic carpet as a hybrid sports car, purple with gold trim, and as alive as Herbie the Love Bug.

* While I’m thinking about it, Herbie the Love Bug wouldn’t be unwelcome, either.

* Zach Braff as a small, jaundiced paranoiac who won’t stop ranting about the sky falling.

* Goofy as the world’s worst sports instructor, still making that terrified “YAAAA-HOOIE!” cry that never fails to make me chuckle.

* Robin Williams as a live-action genie. If this never happens, the show and its promises are all LIES.

Of course, a cast this size would require a budget of several million dollars per episode, possibly as much as one-tenth the cost of an episode of George Lucas’ Star Wars dream show. Cuts will need to be made somewhere to accommodate producer mandates. CG effects may be toned down somewhat in favor of placards that advise the viewers at home to “just use your imagination.” More time for extra commercials may be necessary, cutting episode running times down from forty-five minutes per episode to about ten. I also wouldn’t be surprised to see Storybrooke open its very first Subway franchise.

The schedule for next weekend’s San Diego Comic Con includes a Once Upon a Time panel (Saturday the 14th at 11 a.m. — note it on your SDCC calendar app!) that will no doubt shed more light on what’s in store for season two, in addition to giving lucky fans a chance to express their gratitude to the cast in person. Personally, I’m crossing my fingers in hopes of a Grumpy and the Fairy spinoff. I’d claim myself a front-row seat for that, even if it was…for a price.