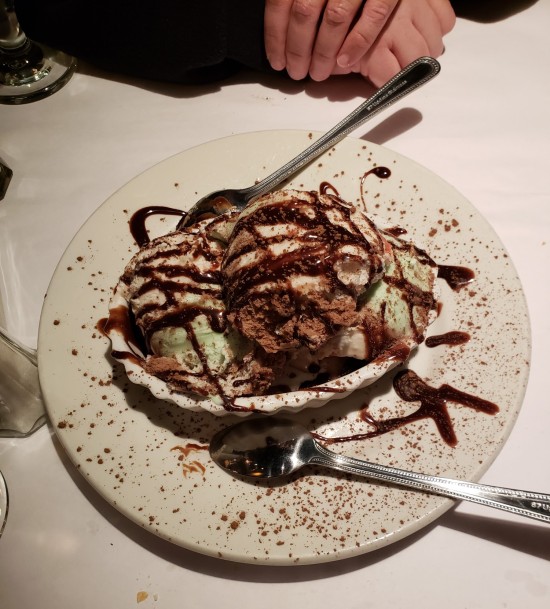 Spumoni! Best dessert of the trip. Chocolate, pistachio, and whatever the other one was.

…some of which include Chicago food samples. Our luck with finding decent meals varied throughout the weekend. Thumbs-up restaurants thankfully outnumbered the more perfunctory stops.

After parking near Navy Pier we headed west toward the Magnificent Mile to revisit an old burger joint beloved by many and technically As Seen On TV, the renowned Billy Goat Tavern. We headed down Illinois Street, which led directly into the spooky Lower Chicago streets where the Tavern hides among a number of girders, shadows, and freight entrances to skyscrapers. 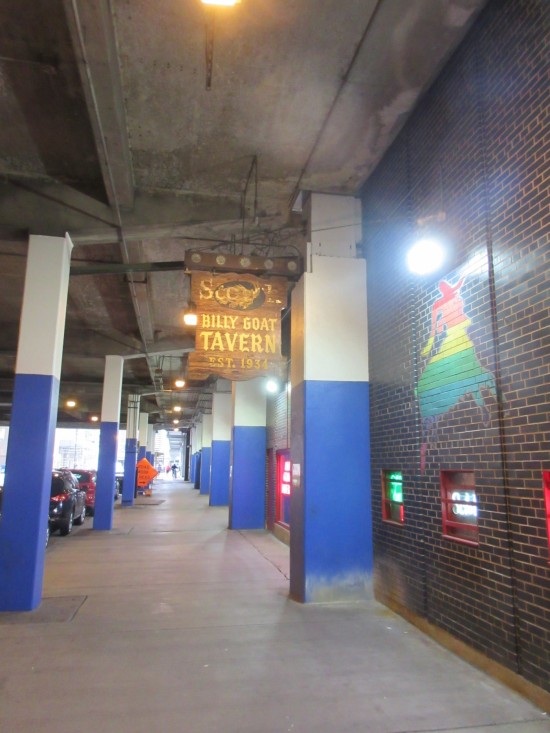 Not all the paths had sidewalks. Thankfully traffic at 11:30 a.m. was light down in the dingy depths. 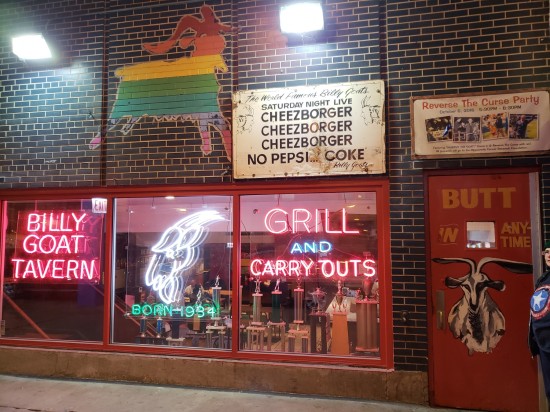 The Billy Goat beacon that cuts right through Stygian blackness and midday hunger with equal utility.

We’ve photographed their burgers before. They haven’t changed. I doubt they ever will or should. They also have brighter locations elsewhere in Chicago for families too meek to seek out the flagship Tavern. 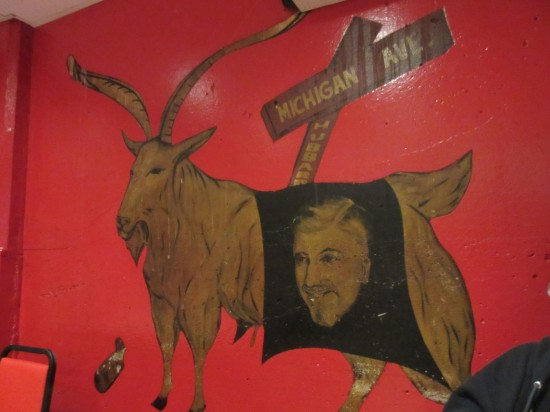 The decor near our table. I presume the head belongs to Mr. William Goatagon Tavernowitz himself. 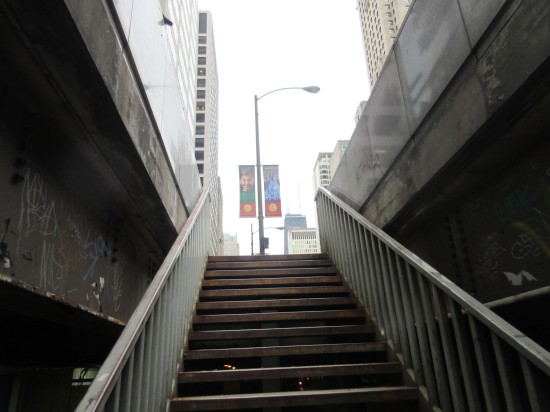 When we finished, we escaped to the upper surface where all the sunlight and high-end shoppers were. 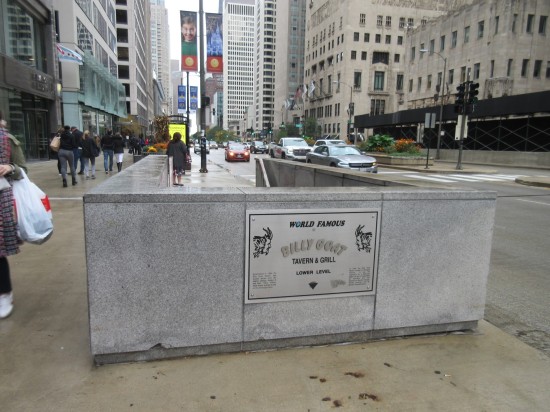 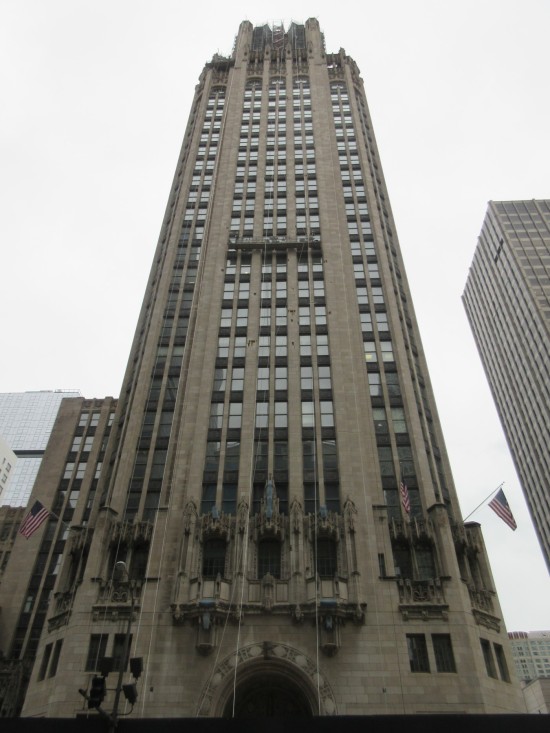 Right across the street from the staircase is Tribune Tower, former home of the Chicago Tribune. Earlier this year their new clickbait overlords at Tronc sold it off and relocated the company down the street to a duller, squarer, beiger building. Plans are now afoot to turn this entire grand monolith into condos.

By the time we concluded Day One of Ace Comic Con Midwest with the Tom Hiddleston photo op, we were starving and vulnerable and needed to get eating over with ASAP.

We walked most of the length of Navy Pier before settling for Big City Chicken. Fried grub had to be better than con food. The pieces were enormous, extremely tasty, and nowhere near as greasy as I expected, but we had to wait 25 minutes and they got our skins backwards. I wanted spicy; Anne very much wanted the opposite. We were fine once we swapped platters and the flames engulfing Anne’s entire head died down.

We ended up with one-and-a-half breasts left over, which I totally forgot in our hotel room cooler when we checked out Sunday. Hopefully the cleaning crew didn’t mind surprise heat.

We wanted large meals to tide us over for as long as possible, in hopes of once again escaping the specter of mediocre con food.

Not far from our Oak Brook hotel was Butterfields Pancake House and Restaurant, a small-ish Illinois company with four locations and exactly the carbs we sought.

Remember: not JUST a pancake house. Because “restaurant” is totally different, you see, because.

We took a few minutes to order. Our meals took roughly half that time for the waitress to practically teleport them to our table. I thought I heard a sonic boom resonating from the kitchen. While Anne enjoyed the first decent Belgian waffle she’s had in a long time, I fell in love with their California Medjool Date Omelette stuffed with dates, bacon, and goat cheese. 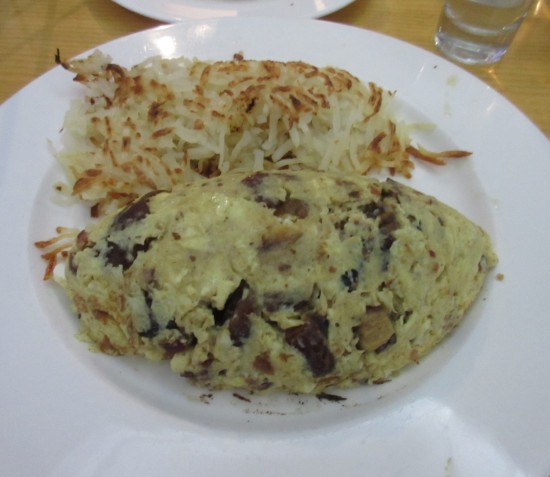 Most omelets don’t score points for presentation, but unlike Tronc, this dish is all about quality content.

We did not escape the specter of mediocre con food.

After the fact we heard whispers of a food court upstairs above Ace, but we saw no visual evidence when we looked up there from the show floor. Rather than backtrack several blocks through Navy Pier and have to go through half-hearted security checks yet again with my stupid awkward comfy steel-toe shoes, we consigned ourselves to the concession stand. Anne’s hot dog was serviceable. My turkey sandwich comprised a 6:1 ratio of bread to meat. The bun might have worked great with, say, a Billy Goat double cheezborger instead of scraps scraped out of an Arby’s meat slicer.

This was still Anne’s birthday weekend. Dinner had to be better.

After what we’d spent on the con we agreed it wouldn’t be five-star, but we weren’t resorting to a mall food court. Through the magic team-up of Google Maps and OpenTable we found ourselves with reservations in Clarendon Hills at an Italian eatery called ZaZa’s. They shared a building with an interior design firm whose multiple signs claimed over half the parking lot out front were reserved for their clients only even though they were closed, leaving ZaZa’s customers to fight over the five remaining spaces. The entire lot was full anyway in defiance of their self-serving signage. We parked at the poorly lit apartment complex next door and walked over without getting mugged or questioned by off-duty interior designers.

Our geek-chic fashions failed to blend in with the upscale diners, but no one denied us entry. 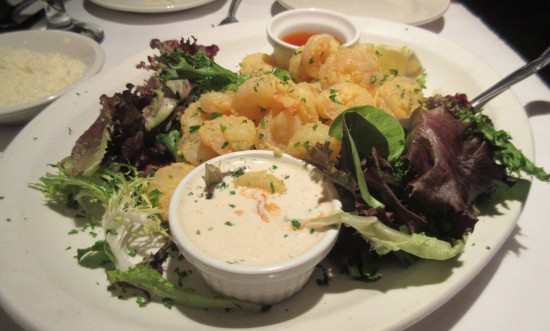 Appetizer: lovely, delicate Rock Island shrimp, served with sweet chili sauce and some other white sauce that paired well with it. 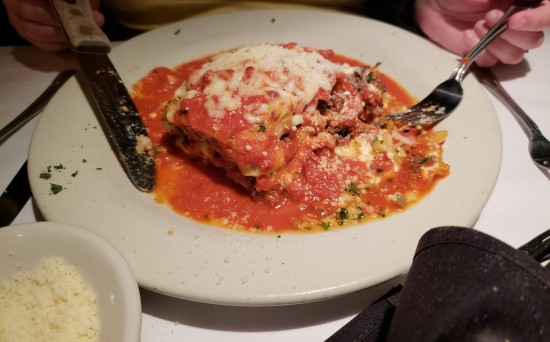 Basic lasagna for the birthday gal. She was happy. 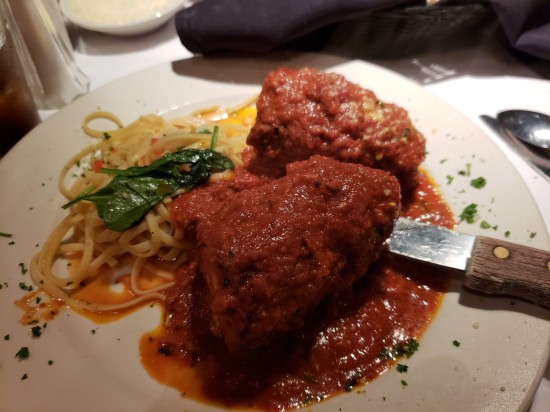 From their seasonal menu I ordered the braciole — meat and meat wrapped together in more meat. Not too much pasta, which was fine. Most tomato sauces bore me, but the Ron Swanson protein special was a tremendous boon to my body’s healing process after two straight days of walking miles and standing hours and agonizing plenty.

…and the spumoni in our lead photo was dessert.

But the best was yet to come.

A Google Maps search for “donuts” nearby yielded six thousand Dunkin franchises and one (1) not-Dunkin shop.

Its location required a mini-quest into the heart of Oakbrook Center, the second largest mall in the Chicago area, across the street from our hotel. We drove over, did half a lap around the mall parking lot because I had no idea where the entrances were, and stopped inside a free, gateless garage that we nearly had all to ourselves. As we got out of the car, a security SUV drove past us without stopping or blinking.

We found to our regret our quarry was on the opposite end of the Center. We took the scenic tour past a series of closed stores. The paths were deserted save one power-walking elderly man, a few straggling donut fans like us, and a handful of girls who picked an odd time for window shopping. 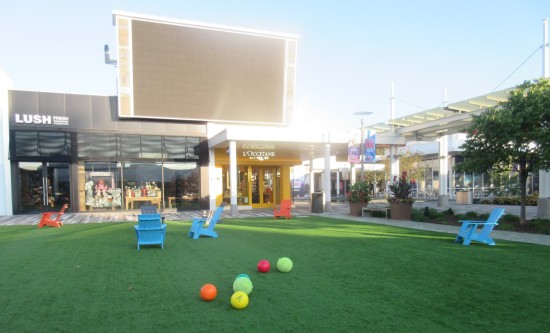 Play area for your tykes while you’re busy selecting your next pair of three-figure shoes. 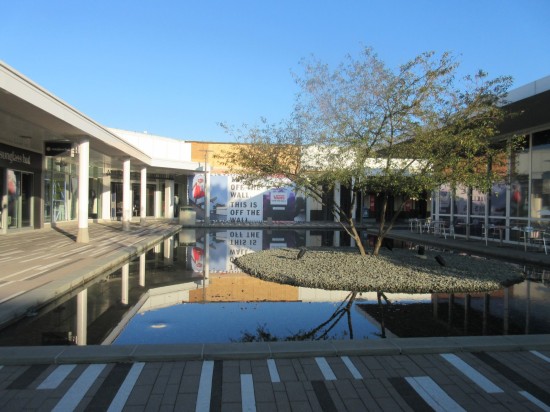 Reflecting pond where you can stop and pose contemplatively in your new-sunglasses selfie. 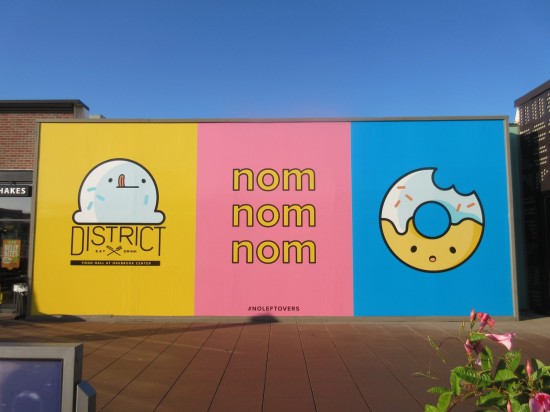 In their second-floor food court was the only business in the entire mall open Sunday mornings: Stan’s Donuts, a California staple that extended its powers through a synergistic wormhole into the Chicago market and now boasts at least ten locations there. They have fewer locations than Dunkin in general, but far, far more pastry varieties. 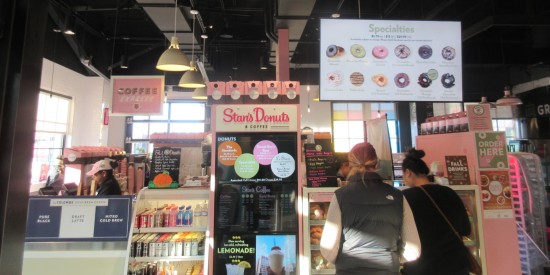 A few aficionados beat us here. 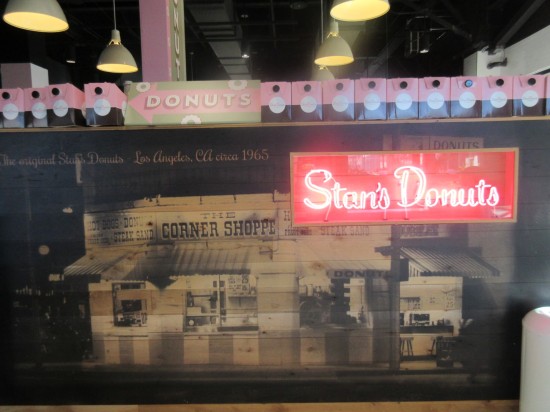 One wall commemorates their history and hometown. 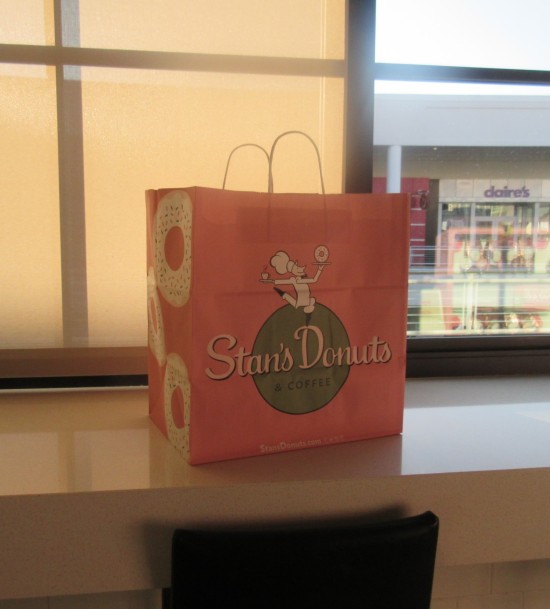 Another customer bought enough to merit their own precious Stan’s shopping bag. 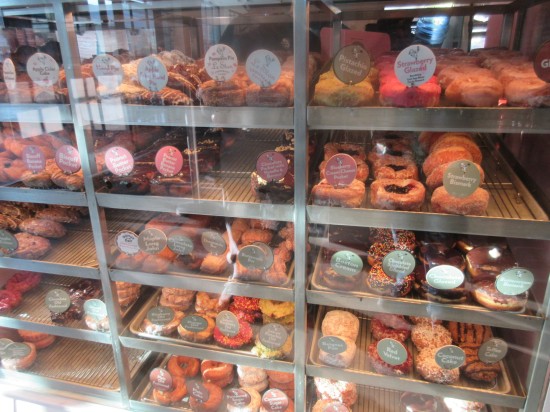 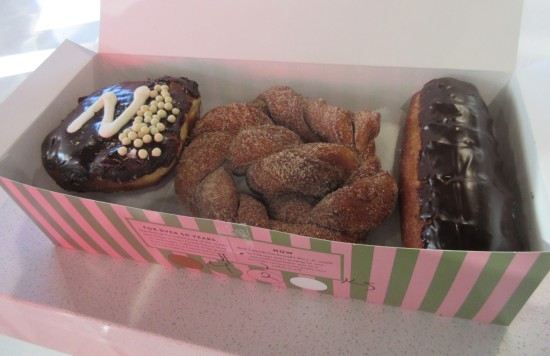 Our stash, top row: chocolate/banana/Nutella donut; cinnamon pretzel donut; and a long john to take home for my son.

Bottom row, not pictured: pistachio donut, toffee cake donut, and a “Le Stan” croissant donut. Not a single misstep or regret in the entire box.

Six artisan donuts, coffee, hot chocolate, and two bottled waters for the road added up to more than Billy Goat and the crappy con food combined. But it was the best possible morning capper to Anne’s birthday weekend.

To compensate for that last extravagance, we grabbed McDonald’s drive-thru back in Indy and took it home. Our return meal went a bit off the rails in a comedy of errors involving some spilled fries, a constantly ravenous dog, a wobbly end table, a crowded corner, and a smashed Disney glass. Simultaneous cleanup and animal control put a crimp in the afternoon. My fries were cold by the time I finished vacuuming the aftermath.

The birthday party was definitely over.

The End. Thanks for reading! Lord willing, see you next Chicago event.