Strip mall pizza. Sometimes it’s a good thing. Sometimes you know you’re settling, and missing out on what you really wanted.

We’re no strangers to disappointment. Not every plan we make goes through without a hitch. Some circumstances are beyond our control. Some are controllable, but can flop anyway. We do what we can with the skills we have, the circumstances at hand, the prayers that are answered, and the Plan B’s when the answer is “no”.

The average travel blogger tends to skip the parts where things went wrong, or the scenery wasn’t worthy of a magazine cover, or the occupants of the vehicle were severely cross with one another. Longtime MCC readers know that’s not quite who we are. It’s one among hundreds of reasons why we’re not in any of the really awesome blogger networking cliques, but we enjoy what we do anyway, both on location during the trip and in reminiscing online after the fact…especially when we can look back on unhappy moments and savor the relief of getting past them.

On Day Four we had a fascinating appointment planned in the late afternoon, but to make it happen, the early afternoon had to be turned into a 2½-hour marathon of sacrifices and tension. Thankfully that, too, would pass.

Once Anne was satisfied with the extent of our FDR experience, we continued south along the east side of the Hudson River. Lunch had to be our next errand. We had a destination already in mind, a mere two miles away: the Culinary Institute of America. 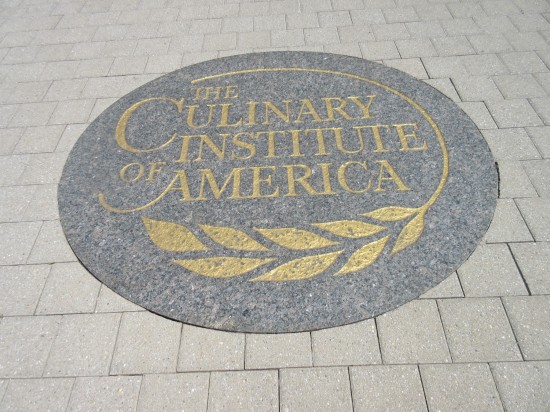 Caution: learning and good eats ahead.

Now boasting four locations worldwide, the CIA (no relation) was the first major cooking college in America. In addition to classes and learning and the usual academic components, their Hyde Park flagship campus has nine different eateries open to the public and, as we understand it, serving grade-A gourmet dishes from their finest students. You might know the works of such CIA alumni as Anthony Bourdain and a Who’s Who of Food Network judges and competing chefs — Scott Conant, Amanda Freitag, Geoffrey Zakarian, Cat Cora, Michael Symon, Rocco DiSpirito, Duff Goldman, and more.

Reservations were strongly recommended but not mandatory. We had no idea what time we’d arrive after going from Albany to Hyde Park via Kinderhook and the dead Presidents in between. We made a judgment call and gambled on showing up unannounced.

We entered campus off the highway, made our way to the small public garage on the southwest side, got out and lucked our way toward the correct building. We found a few of the restaurants with no trouble…except for the part where we’d be looking at a 30-to-60-minute wait. Normally that doesn’t bother us, but we had a 2:30 appointment considerably far away. I did the math. If we ate here, we’d be doomed.

Reluctantly we exited the building, got lost in the garage, found the car, and returned to the highway. Maybe someday we’ll dine and unwind at the Food Network roster’s #1 alma mater, but it wouldn’t be on this vacation. 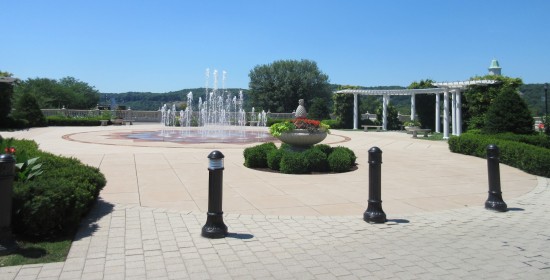 But hey, cool fountains with summertime water in them.

According to my adjusted mental calculations, we didn’t have much more time for restaurant guesswork. We’d have to take whatever relatively speedy options came up next in our path.

Several miles later in the city of Poughkeepsie, we breathed a sigh of relief when we saw a Quiznos sign in a small strip mall on our left. Anne and I are big fans of Quiznos sandwiches, which are ten times better than any Subway in my book. We used to love the one by our old apartment, run by a nice Muslim couple, which sadly closed years ago. The Quiznos in Rosemont, IL, was a favorite stop on our Wizard World Chicago weekends, but it died as well. Still another served us well in Cincinnati a couple years back, but I’ve just now searched and discovered to my sorrow it’s likewise terminated. The location a few miles from our current house was among the first to shut down, but it was terrible and not missed. In fact, in the past two years the only open location we’ve been able to indulge was one in Metropolis, IL, attached to a gas station.

But here they were in upstate New York, ready to save our day. We pulled into the crowded parking lot…only to notice a For Sale sign we couldn’t have seen from the road. Once again a Quiznos had passed on. It was no more. Ceased to be. Expired and gone to meet its maker in Subway Competitor Heaven. A stiff, bereft of life, resting in peace.

We couldn’t keep pulling off the road every two miles for repetitive setbacks. We settled for the restaurant on the other side of the same building: Giacomo’s Pizza. 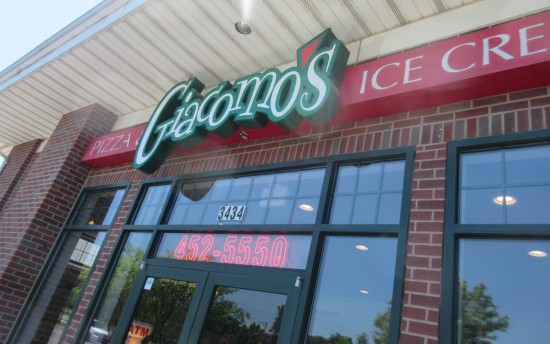 Never heard of it. It would have to do.

The design ethos in their tiny dining area was Prefab Rustic Flourish.

Their M.O. is selling pizza by the large slice. We have chain joints exactly like this back in Indiana — Luca Pizza, Enzo Pizza, and the like, usually nested in our shopping malls. My lunch results were in our lead photo: one spinach calzone and a slice of baked ziti pizza. Anne had…I dunno, pizza or whatever. The calzone was tough but passable, while the ziti grew rubbery in minutes. It wasn’t the Chopped meal we’d both imagined would be the day’s centerpiece.

According to my readjusted mental calculations, I thought we might have time for one more quick stop before the appointment. Anne was interested in getting a full view of the Hudson River, upstate-style. Her vacation research had turned up a potentially awesome vantage point called the Walkway Over the Hudson, a bridge that spans the Hudson and links Poughkeepsie to Highland, NY, on the west bank. Our plan was to find a place to ditch the car for a few minutes, walk partway onto the bridge, marvel at nature’s beauty and God’s Creation, then run back to the car and zoom away. 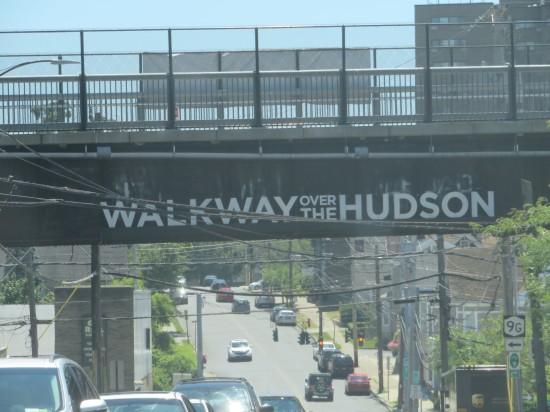 No, this isn’t the Hudson River. But, like, not far now?

Our directions had other ideas. We followed them as best we could to a particular recommended parking lot, some free gravel acreage near no water in sight. We spotted a path leading westward toward water. We headed that-a-way, Anne with her doubts and me with my vain hopes. 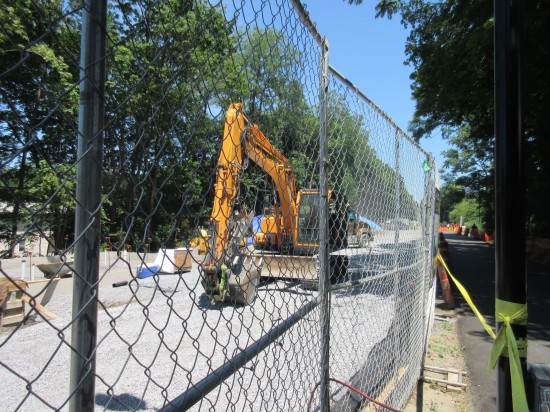 But first we had to pass…the Forbidden Construction Zone. Not hard — the path wended around its left flank. 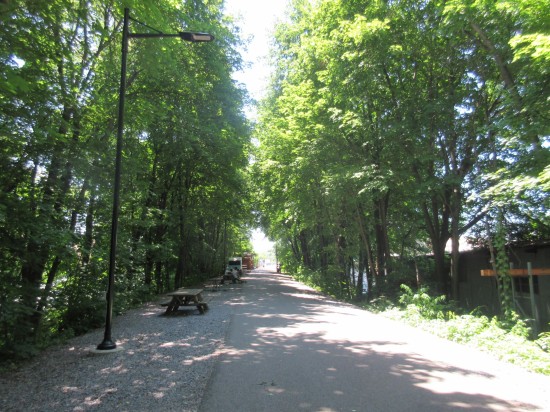 Then we had to cross…the Boring Forest Where People Kept Getting in Our Way.

We survived the gauntlet of the Random Doting Cartoon Roosevelt Heads.

Alas, our mettle would be tested and proved wanting at the Troll-less Paved Bridge Obviously Several Blocks Too Long.

With one more round of mental math, I’d calculated the exact minute at which we would have no choice but to turn around and return to the car in shame and intense disappointment or else miss the appointment. That photo was pretty much it. We glanced over the sides of the bridge for all they were worth, cursed our timing, and retreated. 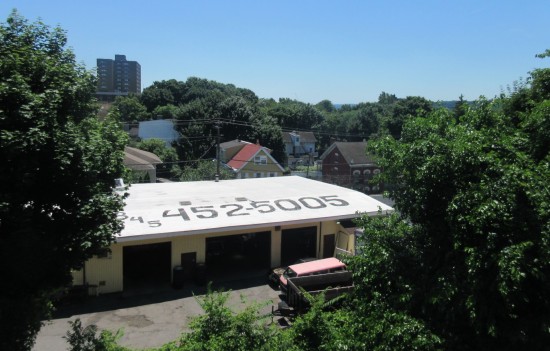 So. Um. Welcome to Poughkeepsie, then.

As we continued ever more southward, we consoled ourselves with what little of the Hudson we could spot while the car was in motion. We knew it wasn’t the same.

My version. Not bad for a guy who’s supposed to be driving.

Anne’s version invites the viewer to imagine the Hudson River being sent to jail for the crime of Avoiding Us on Purpose.

From the Walkway’s alleged official parking lot, we had maybe 70-80 minutes to make a 40-mile, 55-minute drive through the Hudson Highlands to the afternoon’s feature presentation. The proportions of minutes-to-miles were thrown off by all the hills and mountains that made the terrain too interesting, compromised speed limits, and gave other drivers frequent reasons to slow down and further dampen our spirits. We were not happy and losing hope with every curve, every brake light, every minute counted off fruitlessly on the dashboard clock. Fortunately our complete lack of weapons prevented this ride from turning into a bad episode of Snapped.

Even once we got off the highway, it didn’t help that the town of Highlands was a mess of narrow, winding, tangled, non-linear streets indistinguishable from backstreets, like Boston in microcosm. Google Maps didn’t care for Highlands one bit and I didn’t blame it. I can’t recall if I made any wrong turns on the way into town, but our Fear Of Missing Out was escalating to critical mass.

At 2:15 p.m., ready to rend our garments and hair asunder, I suddenly knew everything would be all right. I’d gotten us there after all.

While driving past an aisle of unhelpful tiny shops, I happened to look across the street and finally found the tank we were looking for.

Most people don’t sigh happily when they see a tank. Most people aren’t us.