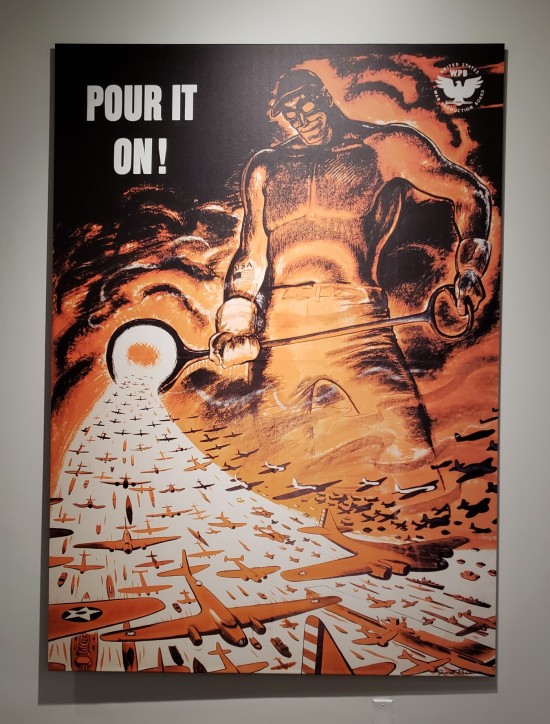 “Pour It On!” by Garrett Price, a clarion call to American factory workers whose products were part of the war effort from the homefront.

Longtime MCC readers know Anne is a lifelong American history aficionado with a deep specialization in World War 2. It comes up in our conversations even after all these years, in her reading matter and library selections, and even in our origin story. From time to time WWII has also come up during our travels. There was the time we spent hours in the massive National WWII Museum in New Orleans, then six months later my tour of the National Museum of WWII Aviation in Colorado Springs, not to mention Anne’s birthday that same year, when we spent the afternoon with concentration camp survivor Eva Mozes Kor, among other occasions.

All told, WWII is kind of Anne’s thing. It was completely understandable that she would be intensely interested in visiting the Franklin D. Roosevelt Library and Museum, in viewing artifacts and reminders drawn from the life of the American President who was in charge throughout most of that. The museum didn’t disappoint. 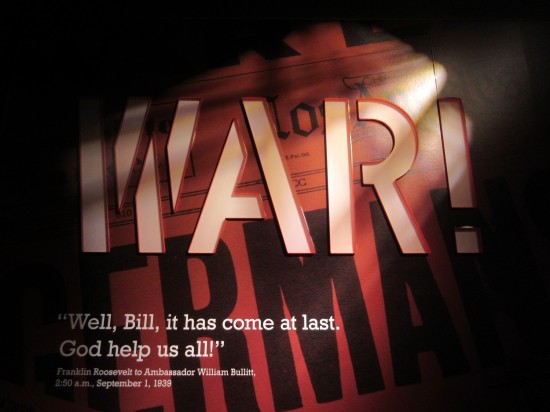 The Museum divided Roosevelt’s life and exhibits into eras. Some transitions were less subtle than others. 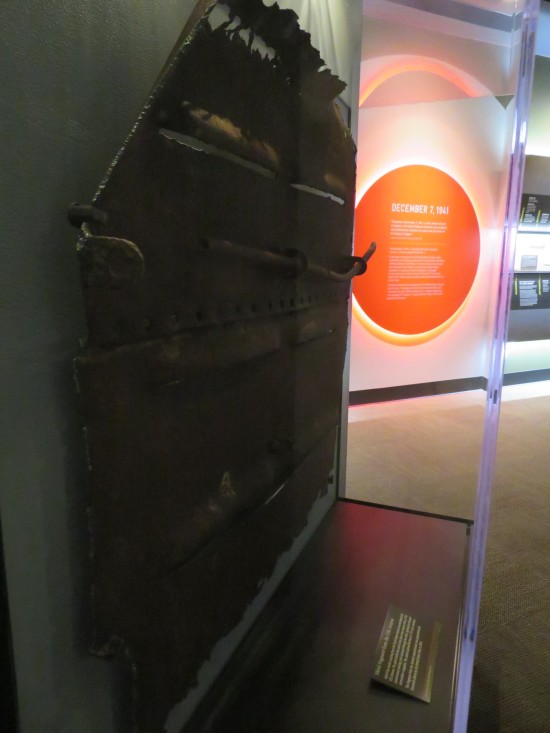 A 2016 gift from the US Navy to the Roosevelt Museum in 2016: a fragment from the USS Arizona, one among many of our ships sunk at Pearl Harbor. 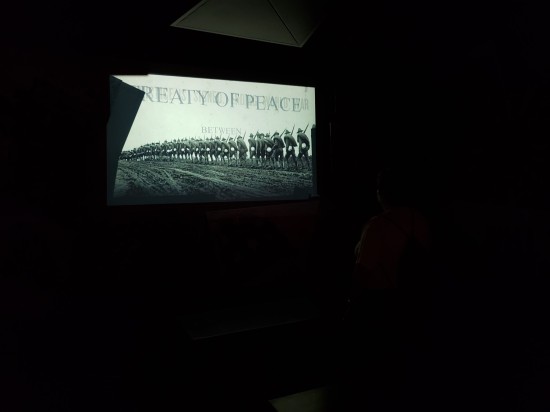 Theater showing Frank Capra’s Prelude to War, the first chapter in his Why We Fight documentary series. 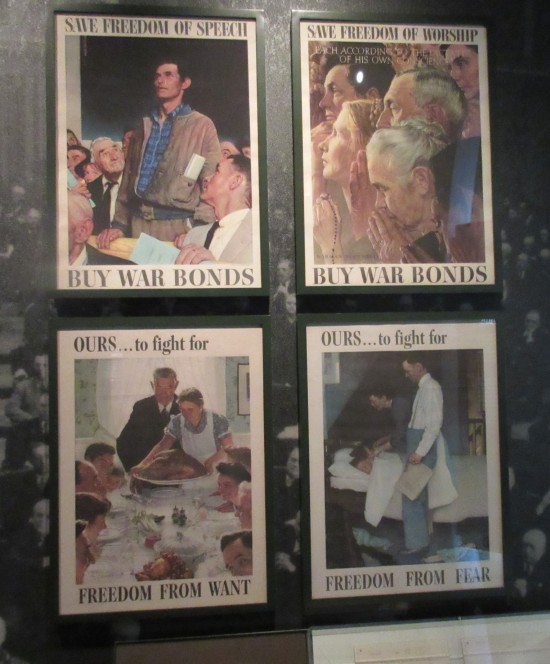 Americans backed the effort where they could. Americana legend Norman Rockwell painted these ads encouraging folks to support the troops by buying war bonds.

Isolationists dogged FDR every time he ran for reelection. Perhaps they underestimated Hitler’s reach. Or they didn’t know about the concentration camps or the millions murdered. Or they did know but they were fine with it because they were heartless monsters. 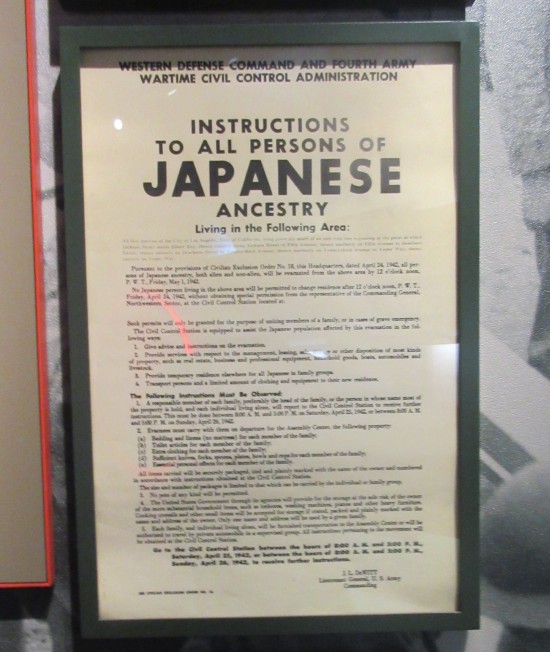 Not that Roosevelt can claim total moral victory in all things. Executive Order 9066, which created the infamous internment camps for Japanese-Americans and other immigrants, ranks among his least beloved, least justifiable moments ever.

In addition to the permanent collections, this year’s assortment included “The Art of War: American Poster Art 1941-1945”, a temporary exhibit of ads and artworks whose target audience was anyone staying behind on the American mainland who wouldn’t be heading overseas to fight the good fight in person. Some examples on display were simple, patriotic rallying cries. Some were ads for war bonds, one option for helping bankroll the war effort in lieu of joining up. Some were fearsome propaganda. Some were paranoid and terrifying. Some haven’t aged well. They aimed to serve a purpose at the time. They weren’t really meant to put the “poster” in “posterity”. But rarely has wartime inspired such an intense effort among citizens to unite one and all as Team America. 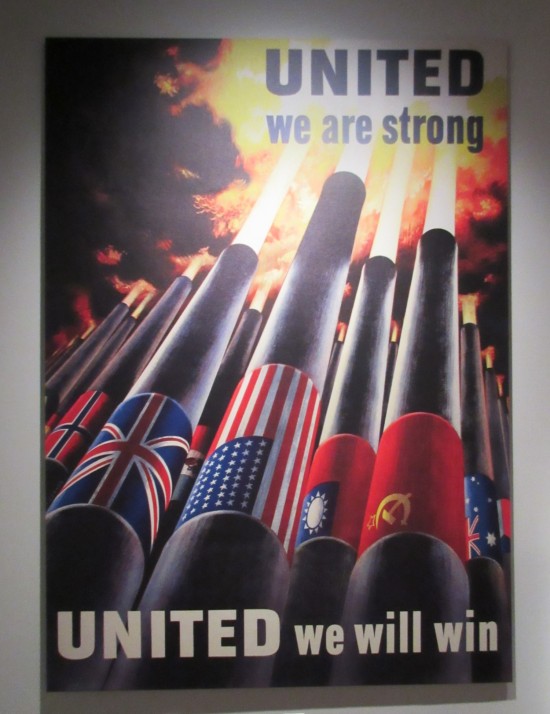 Three cheers for all the Allies in this together – Britain, Australia, Norway, China, Russia…um… 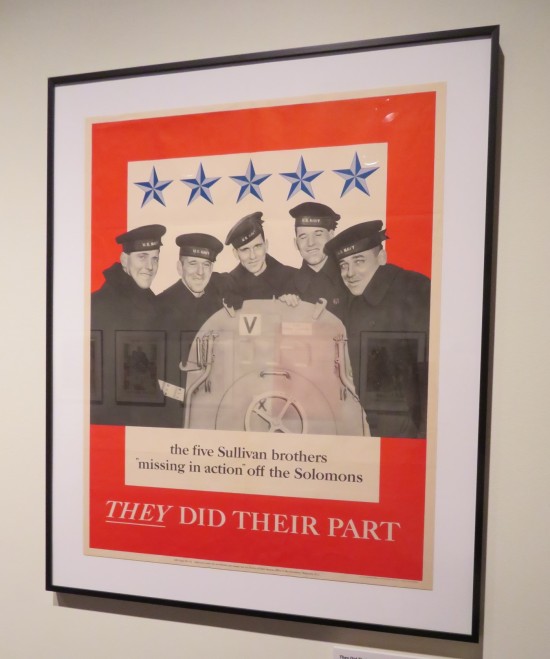 Salute to the late Sullivan brothers, inspiration for the premise of Saving Private Ryan except in tragic real life none of them lived to be Matt Damon. 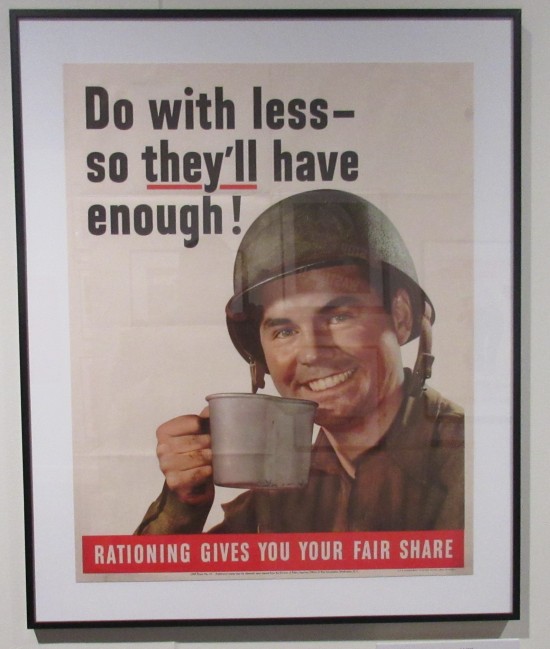 I referenced this one in an overlong caption in our New Orleans travelogue. If you hadn’t seen it before, now you can see what I was talking about three years ago. 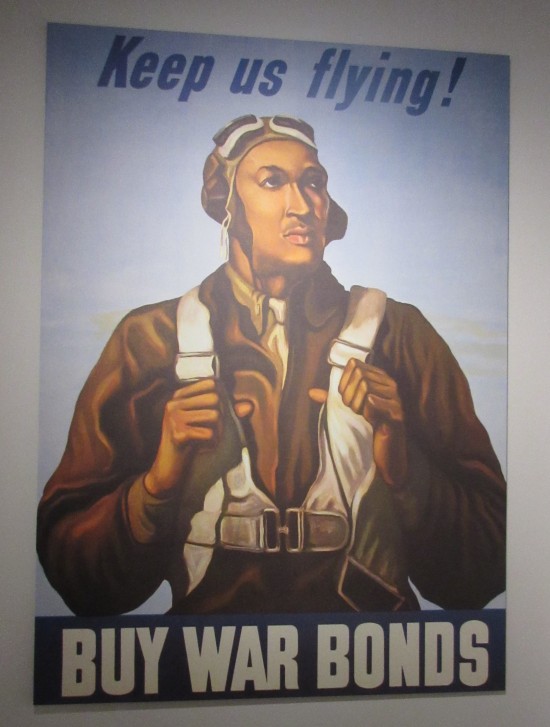 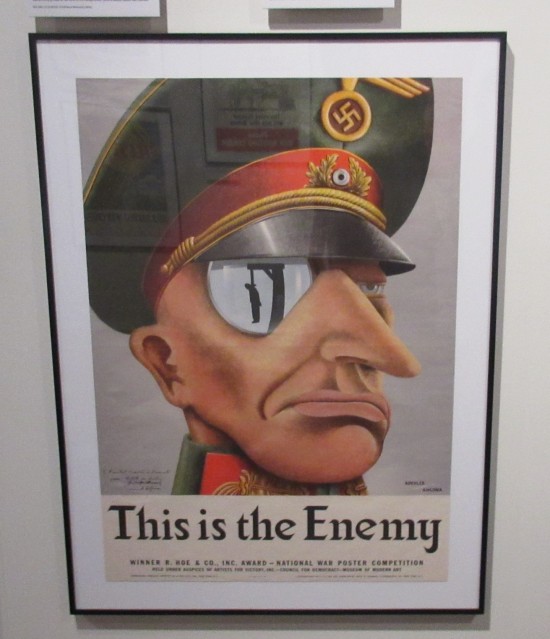 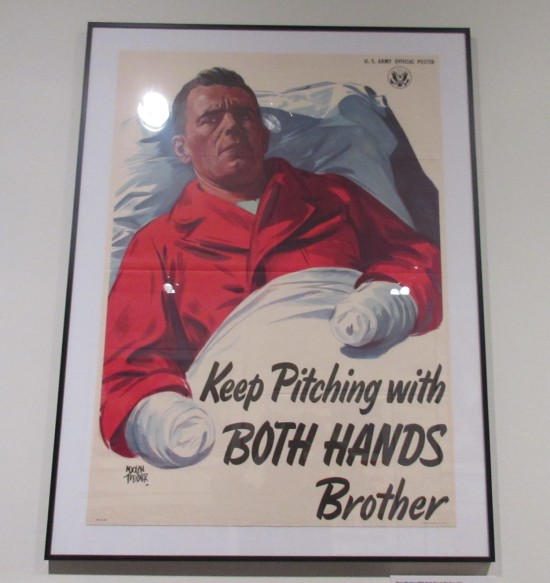 Sobering reminder that Harold Russell from The Best Years of Our Lives wasn’t the only soldier to suffer damage for the cause. 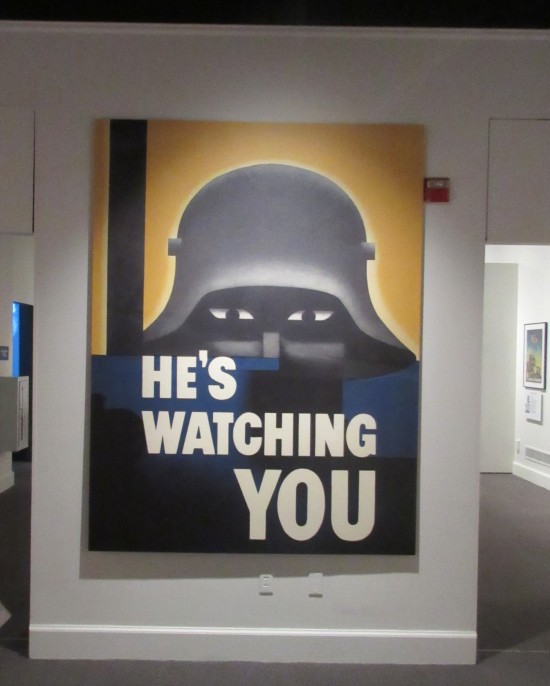 The idea of spies and sleeper agents in our midst was very much at a fever pitch in these tough times, and inspired some unusual choices in self-expression and one-panel cautionary tales. 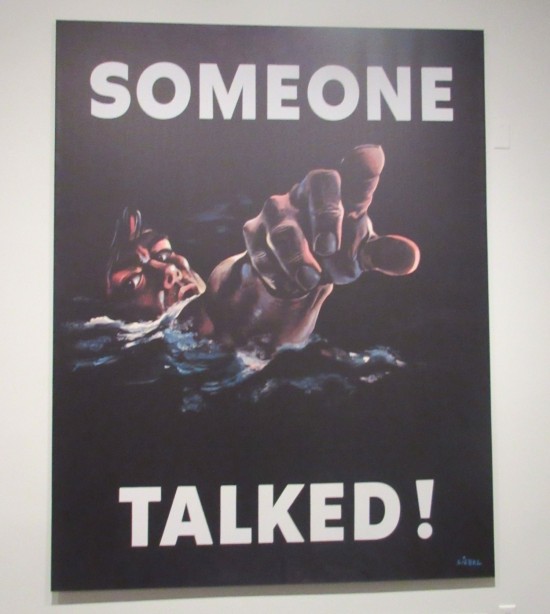 Many of us olds remember the phrase “Loose lips sink ships.” Because in WWII, oversharing could in theory get our troops killed and our watercraft torpedoed. 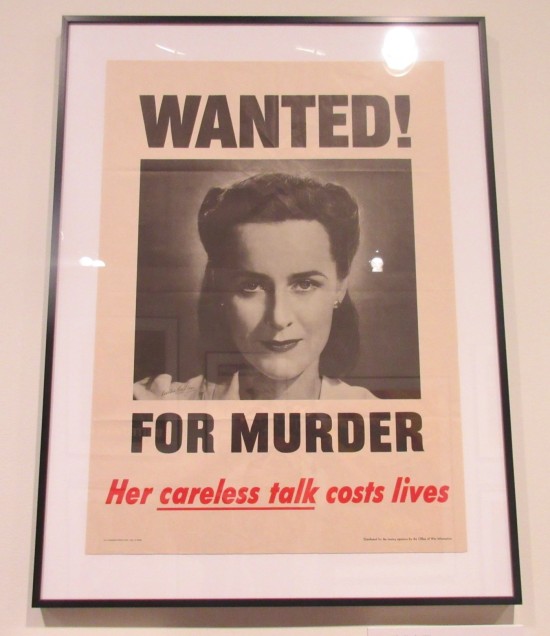 OMG MABEL HOW COULD YOU, YOU STUPID BROAD