A bit of Philadelphia at night. This one was my wallpaper on my work PC for a while.

On the road a curious idea for a side project struck me: take pictures of the views from each of our hotel rooms and see what the resulting montage looks like. It would’ve been a much cooler idea if we’d stayed only at the swankiest accommodations with the most breathtaking views outside — say, next to some giant national monuments or rolling New Zealand hills. We’re not affluent enough to stay anywhere we want, but I made our reservations at different price levels for variety and fun just to see what would happen. One of the hotels definitely didn’t disappoint.

END_OF_DOCUMENT_TOKEN_TO_BE_REPLACED

That time we met a gold rabbit gazing upon the adventure of General George Washingbun at Valley Furge.

Hundreds of miles stood between us and our next hotel, as well as Presidential Gravesite #7 and one major historical site. None of the breakfast options within walking distance from our hotel sounded appealing. Instead, the night before, I scoped out a restaurant in a suburb called King of Prussia, some 35 minutes northwest according to that evening’s search results. That didn’t sound like such a long wait for breakfast and required only a slight detour off our original printed directions.

In the morning, we would encounter our biggest, most stressful challenge of the entire week: escape from Philadelphia.

END_OF_DOCUMENT_TOKEN_TO_BE_REPLACED

Towns with a long and storied history tend to be big on statues and sculptures. Nothing brings great Americans to life more robustly than three-dimensional stone doppelgängers. We concluded Day Five with one last stroll through Center City Philadelphia, surrounded by art on all sides as the sun retreated into the west.

END_OF_DOCUMENT_TOKEN_TO_BE_REPLACED 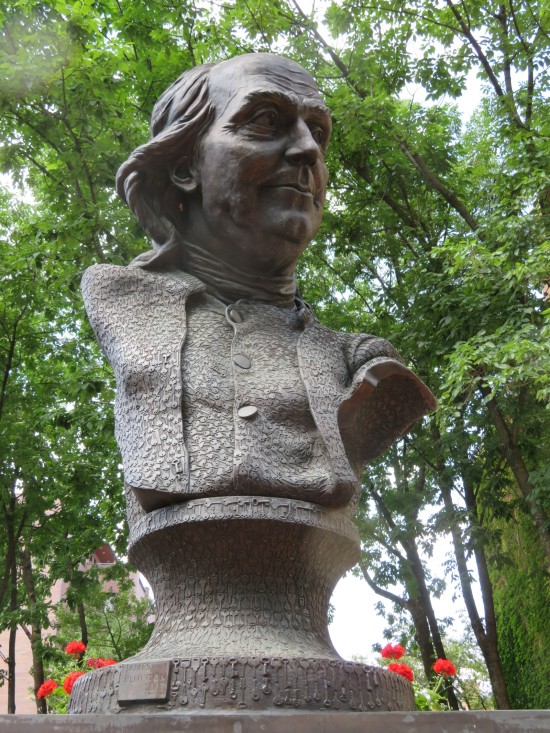 “Keys to Community”, a 2007 work by James Peniston, is a one-ton bronze Benjamin Franklin covered in casts of 1000 kids’ keys, funded by the local fire department and 1.8 million donated pennies.

Yep, we’re still in Philadelphia. While Anne had her own objectives to pursue on our second foray into the City of Brotherly Love — largely centered around American history — my own to-do list was simple: I just wanted to see Philly up close — roam the streets, feel the vibe, see downtown up close, and just plain experience it instead of merely driving through it with the doors locked…or as we’d done on our first go-around in 2010, when we rode a trolley past several highlights without the power to stop and appreciate at will.

So on Day Five we wandered a bit, we shopped a little, we took a plethora of photos. This set is the daytime half.

END_OF_DOCUMENT_TOKEN_TO_BE_REPLACED

Once again we didn’t make it to the official Rocky Balboa statue in front of the Philadelphia Museum of Art. His smaller, more colorful twin would have to do.

Our second time in Philadelphia wasn’t meant to be a total retread of our 2010 visit. Just the same, we couldn’t resist walking past a few of the major highlights. We also couldn’t help walking past them — the parking garage underneath Independence Mall was the most convenient place to leave the car for our first few hours in town, adjacent to several new sights we wanted to see. This year we had slightly more time, somewhat better cameras, and far better maps at our fingertips, given that neither of us owned a mobile phone till 2012.

END_OF_DOCUMENT_TOKEN_TO_BE_REPLACED

That time in December 1775 in Harvard Yard when an insult match between soldiers turned into a snowball fight, which turned into a big brawl that George Washington had to break up. That escalated quickly.

In our long, long drives through 32 states and counting, we’ve seen a version of Jamestown, Civil War battlefields, the National World War II Museum, and memorials honoring the individual casualties from America’s last 105 years’ worth of wars or so. We still have a few official war museums to cross off, which we expect will follow the pattern — lots of artifacts from the era, probably some writing samples, and of course plenty of photos where applicable.

Philadelphia’s Museum of the American Revolution features 18,000 square feet of exhibits covering the trials and tumults of our nation’s infancy, but begins with a severe disadvantage: 240 years ago, no one thought to take photos, or bothered to invent the camera in a timely manner. If a nation rises but no one Instagrammed it, is it still free?

END_OF_DOCUMENT_TOKEN_TO_BE_REPLACED

Historically accurate recreation of actual flag treatment In the 18th century before the invention of the United States Flag Code. For stricter modern audiences, you can just barely seen the extra cloth placed beneath the flag technically keeping it off the floor.

Before Mrs. Pickersgill, and before Mr. Key, there was the trailblazer they followed, the grand dame of Old Glory herself — Betsy Ross.

Well…allegedly. Historians dispute the veracity of some or every aspect of the classic tale of Betsy Ross sewing our first flag at the behest of George Washington Himself. We weren’t at the Betsy Ross House in Philadelphia to examine the evidence and settle the debate once and for all, or to dispel our illusions and tremble at discovering Everything You Know Is Wrong. The truth is, the House just so happened to be along the path we’d chosen to walk down downtown Philly. It was a second-tier option on our to-do list, ranking mostly because we’d read that Betsy Ross’ own grave is on the premises. Ross wasn’t a solid fit into our “Presidential gravesite” theme, but for history’s sake Anne was mildly interested. And I was game.

In the spirit of the House’s presentation, I shall now refuse to type “allegedly” for the remainder of this chapter lest I bore myself out of writing it. Mentally insert if wherever you feel it should fit for your level of comfort and/or dedication to truthiness.

END_OF_DOCUMENT_TOKEN_TO_BE_REPLACED

Obligatory George Washington statue. We lost track of how many times his face appeared in metal on this trip.

The voluminous main floor of the National Constitution Center was interesting and educational in and of itself, but an unusual display awaited us on the second floor in the George H. W. Bush Gallery, a room in which the momentous signing of the U.S. Constitution takes on real-life proportions and surrounds visitors in history and metal.

END_OF_DOCUMENT_TOKEN_TO_BE_REPLACED

Is the American version of democracy a viable system, or is a world where citizens love JFK more than Gerald Ford an utter travesty? YOU make the call!

Among our nineteen official annual road trips, we’ve had a few experiences in which we found ourselves falling short of our goals, not quite exploring our targeted locations to the fullest, and promising ourselves to keep them in mind in case we had time in the future to call do-over. Some of the cities and states we’ve visited are extremely unlikely to see us return, for better or worse. But we like the idea of arranging second chances where possible and merited.

Once upon a time, Philadelphia was supposed to be the center of our 2010 road trip. As I wrote in the present-day commentary for that particular travelogue:

Some of our road trips simply needed more days that what we allotted. We thought we’d learned that lesson on our 2005 drive to San Antonio, when we spent more time in the car than we did on foot in Texas, because their state is like a separate continent compared to home. Our trip to Philadelphia encountered similar issues but for a different reason. We’d found so many interesting sights to see near Philly that we barely left any time for the city itself…

This year we had a few different ideas what to do after leaving New Jersey and entering Pennsylvania. Two contenders rose above the rest: either head southeast for our introductory foray into the first state of Delaware, or go back to Philadelphia. We wouldn’t have time to venture too far into Delaware, but any attractive excuse to step foot inside its border would’ve been nice, if only to cross another state off our bucket lists. After a considerable amount of research on its nearest regions, our hypothetical Delaware to-do list looked like this:

1. Check out their capitol dome
2. Visit the gravesites of the exactly zero Presidents buried there
3. Reenact the “Hi! We’re in…Delaware” scene from Wayne’s World

…and that’s the story of why our next several chapters feature our grand return to Philadelphia. And what better way to dive into the original capital of the United States of America than to visit a giant museum dedicated to the Founding Fathers and some of their most important words that made America work?