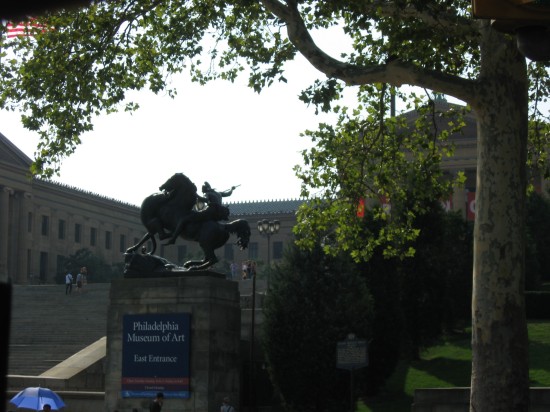 The Philadelphia Museum of Art looked fabulous from a distance on a trolley that wasn’t stopping.

Some of our road trips simply needed more days that what we allotted. We thought we’d learned that lesson on our 2005 drive to San Antonio, when we spent more time in the car than we did on foot in Texas, because their state is like a separate continent compared to home. Our trip to Philadelphia encountered similar issues but for a different reason. We’d found so many interesting sights to see near Philly that we barely left any time for the city itself. We’re considering making up some of that lost time in this summer’s vacation. At the time, though, we did what we could with the moments we had.

As we walked the distance between the Liberty Bell Center and Christ Church Burial Ground, we saw two different versions of a peculiar little guy wedged into the asphalt, followed by a few more throughout the day. Google says his name is either Reflectorman or Stickman, depending on whose Flickr account you’re viewing. No one with any real broadcast power seems to have any solid idea what his deal is. Our family is prepared to offer a $0.00 reward for information leading to his capture, explanation of his origin, or directions to his home planet. 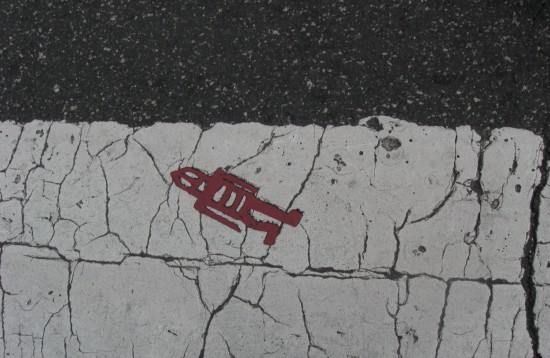 Hiding out on Market Street.

His twin on 5th Street east of the Visitors Center.

Across the street from the cemetery was the fabled U.S. Mint, Philadelphia chapter. In 2003 we saw where our dollar bills are made, at the Bureau of Printing and Engraving in Washington, D.C. Now was our first chance to learn where coins come from, since we’re nowhere near the other U.S. Mints in Denver or San Francisco. Due to bureaucratic tyranny and anti-terrorists-winning jingoism, interior photos were prohibited. All we could do was go inside, look around, buy souvenirs, leave, and cherish our memories for as long as possible until they fade or warp. Hence a complete lack of money shots here.

Naturally there were many standard-issue coins on display, as well as rare coins from decades past. My son enjoyed the collection of historical weights and measuring tools, which he thought looked “all steampunky”. We also saw numerous replicas of Congressional Medals of Honor and other one-time unique coin-shaped tributes minted for such world-famous personalities as Ronald and Nancy Reagan, the Gershwin brothers, Bob Hope, Walt Disney, and Mother Teresa, who could’ve auctioned off her medal and used the winnings to fund a new orphanage.

Visitors can also peer through bay windows overlooking the Mint production facilities. It’s a factory tour with all the trappings as any other — conveyor belts, unlabeled machinery, safety signage, bucketloads of union money. For added ambience, we could also watch a genuine US Mint employee on the clock — a slump-shouldered fifty-year-old man who looked like Giancarlo Esposito, schlepping along in a wife-beater shirt, plaid boxers and white robe, a lit cigarette dangling from his lips. His candid, lifeless antics were so enthralling that we dubbed him Minty the US Mint Clown. Special thanks to the US government for providing citizens with this rare opportunity to view the moneymaking process in all its warty glory.

The Mint was the last Philly attraction within comfy walking distance. We walked one more half-lap around the Visitors Center to board the Phlash and proceeded to trolley our way down the road. Lunchtime was the perfect time to disembark at the Reading Terminal Market, a city market with dozens of restaurants and vendors serving hundreds and hundreds of sardine-packed customers, most of whom I imagine have to leave disappointed because they can’t find space to sit and unwind at the nine available tables.

Due to space and taste considerations, we split up for lunch. My son enjoyed chicken teriyaki at the Tokyo Sushi Bar, whose cashier was a Japanese girl no more than seven years old. Anne disappeared for ages and returned with a “chopped fresh Reuben” (her words) from Hershel’s East Side Deli. I found a place called Beck’s Cajun Cafe, which sold me a creation called a Trainwreck Po’boy, a one-pound sub filled with spicy chopped steak, salami, and Andouille sausage. I nearly exploded and couldn’t finish it. My son nearly exploded from its overpowering smell alone.

Dessert was at Bassett’s Ice Cream, as seen on the Travel Channel special Ice Cream Paradise. Sinful ice cream made on site. 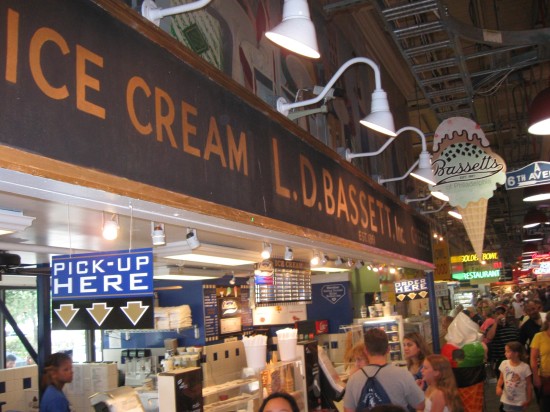 The crowds were so elbow-to-elbow that this was the only shot either of us could move around enough to take.

I wish we’d had time to savor our treats, but we had to split — the bustling crowds and our oversized meals had cost us precious sightseeing time. Fortunately, unlike the bus drivers we’re used to back in Indy, the Phlash driver didn’t mind us bringing our ice cream aboard.

Later in the day, the Phlashes began doubling up and still found themselves near max capacity.

Our excursion to the historic Philadelphia Zoo took up the rest of our afternoon. As soon as we left the zoo, we missed one Phlash by less than a minute, watching the driver glare at us and rebuff our desperate waves. We crouched down next to some malnourished shrubbery and tried to make the most of this extended opportunity to approach heat exhaustion even more daringly. The next Phlash ran several minutes late and was packed wall-to-wall immigrant-style just like Reading Terminal. A few stops later, Anne and my son finally snagged an empty seat, but I had to remain standing for the entire return trip. Standing on a moving bus was fun when I was young — felt like interior city-surfing to me. Dehydration blunted the edge of fun, but I rolled with it. luckily not literally. Oddly, I realized that for some reason, despite the oppressive summertime, I had no signs of sunburn. To this day I’m not sure how that happened.

By this time most Philly attractions were shutting down for the day, and Phlash service only lasted till 6 p.m. I tried not to dwell on everything we would be passing and missing as a result of compromise and time constraints — City Hall, the Rodin Museum, the original “LOVE” sculpture (our Indianapolis Museum of Art had a replica on its lawn for ages), Philly’s own Chinatown, the Please Touch Museum (probably not as perverted as it sounds), their major metropolitan shopping area, and the apparently massive Philadelphia Museum of Art. In the past we’ve posted entire entries of fascinating works and objects that surround some art museums on the outside. This time we didn’t even have time for a free outdoor walkabout, let alone a peek inside.

One installation every visitor can get behind: the famous Rocky Balboa statue. 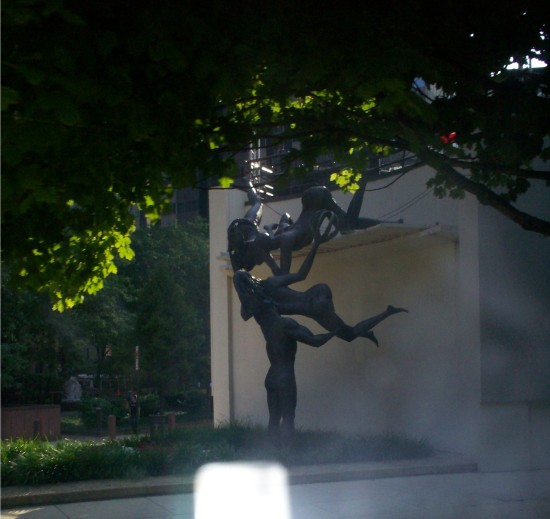 Another nearby sculpture, probably with no IMDb entry.

During all the riding and tilting and wishing for just one drink of water, I came up with the idea of taking a photo at every single stop, thinking that the results might be usable as a mini-photo essay chronicling the return trip. The results were mixed. 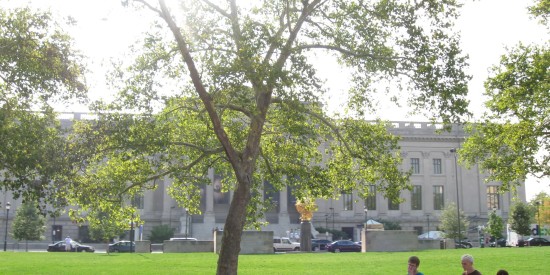 I think this was a different building from the art museum. Maybe. 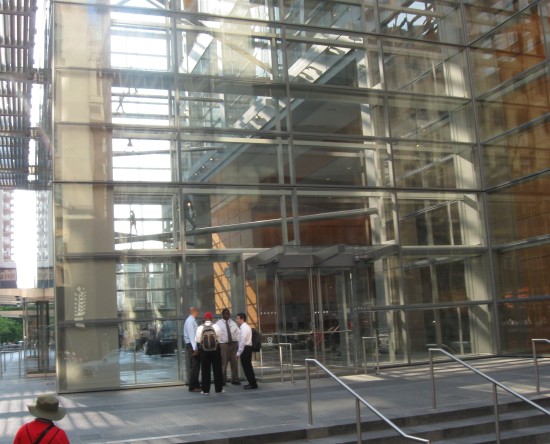 One of the shinier downtown buildings along the Phlash route. 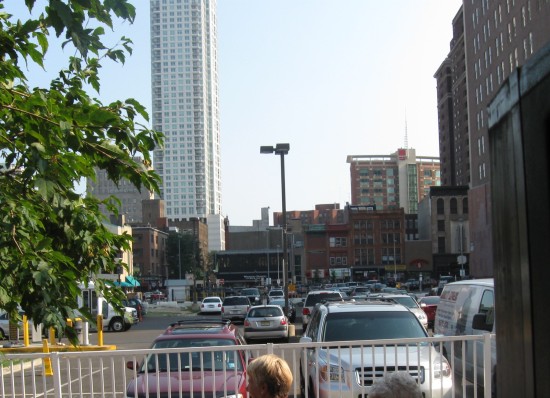 Part of the scenery surrounding our final Phlash stop, for what it was worth.

One last troop of Boy Scouts still wandering the city on orders to keep touring and touring until commanded otherwise.

Eventually we evacuated the Phlash in front of the Independence Hall Visitors Center, returned to the car, and sped away. Our original dinner plan had been Geno’s Steakery, as seen on the Travel Channel special Steak Paradise, but we were beat and it was distant. Instead we returned to our hotel town and settled for dinner across the street, someplace we’d never been called Hoss’s Steak and Sea House. We had a discussion with the manager over the price and conditions of our Buffalo wing appetizer that didn’t need to be anywhere as complicated as it turned out to be, but our androgynous underage server was congenial enough to smooth our ruffled feathers.

That night on TV: wall-to-wall America’s Funniest Home Videos, nothing but repetitive demonstrations of the enervating effects of Murphy’s Law. So many happy people suffering for their mishaps and shortcomings. 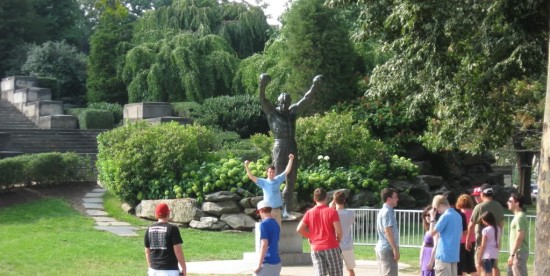 Not quite like this guy, exactly where he wanted to be and loving it.

1. We skipped the Denver Mint when we visited there in 2012, but did tour the similarly themed Federal Reserve Bank of Kansas City in Denver. For more mint-related fun, there was also the time we visited the Old US Mint in New Orleans, which was smaller but had air conditioning and therefore was one of the best places in New Orleans.

2. The briefly referenced Indianapolis Museum of Art was recently renamed “Newfields” by the new minimalists in charge, but I refuse to acknowledge it. They’ve since brought the LOVE replica indoors where it now costs money to view.]