Panamanian golden frogs — critically endangered, rather poisonous, and adorable hanging together from their little leaf shelter.

Before writing this chapter, Anne and I watched the first episode of the BBC’s inspiring, horrifying, utterly gorgeous Planet Earth II on Netflix, and now I’m ashamed of every inadequate animal photo we’ve ever taken. But let’s proceed with another batch of zoo memories anyway.

Day Five in the late afternoon brought us to our annual vacation compromise: another zoo. This time, slight prestige was involved. Billed as “America’s First Zoo”, the Philadelphia Zoo didn’t seem a radical departure from any other that we’ve seen in previous year, except it’s been in continuous business since 1874 and boasts an above-average population of endangered species compared to its competition in other states. Also, scenes from Rocky II were filmed there, including the part where Rocky proposed to Adrian. Visually its most distinctive feature was the balloon we saw from the interstate on our way into town that morning… 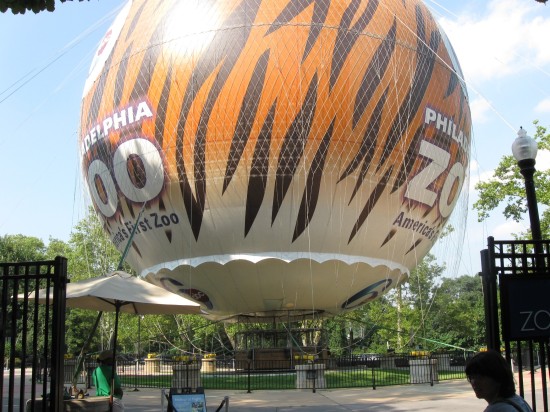 …which might’ve been a fun experiment if we hadn’t been rejected by this sign at the front gate. Their colossal balloon wasn’t taking passengers that day. Slight disappointment.

That meant we had to settle for looking at all creatures great and small. Primary objective: accomplished. 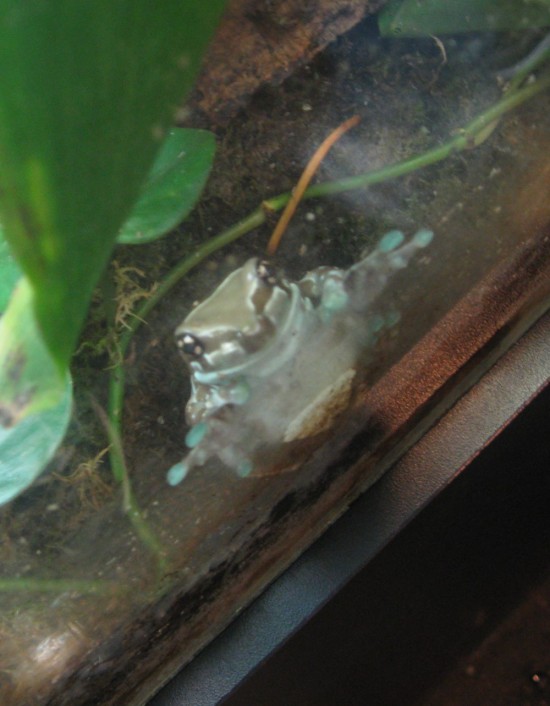 An hourglass tree frog vying for our attention.

Prairie Dogs, familiar friends — and looking as paranoid as ever — from our previous vacation to South Dakota. 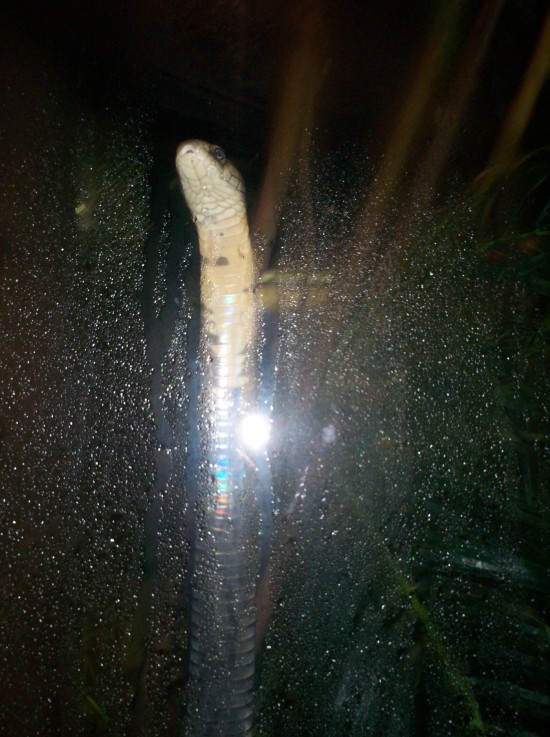 This snake of indeterminate species was likewise wary of our presence, as if we might pose a threat to it. 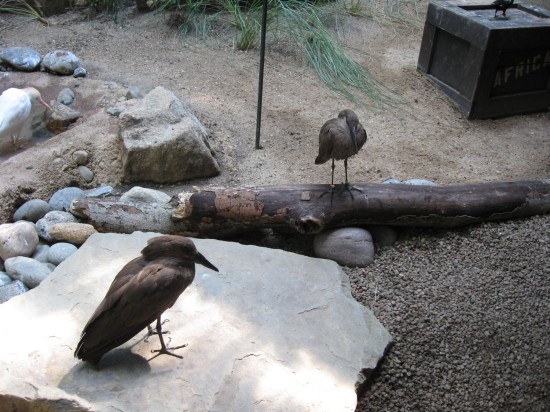 From the Eastern Hemisphere, a pair of hamerkops, which would also be a great name for a German crime drama.

A southern ground hornbill, generally regarded in southern Africa as a major loudmouth. 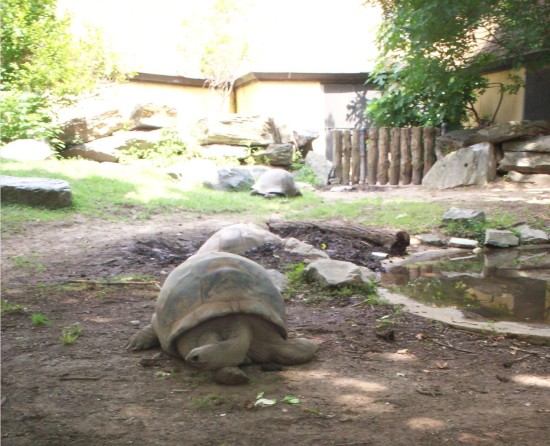 Either Galapagos or Aldabra tortoises, depending on whether or not the nuchal scute is present. No, YOU’RE trying to master herpetology through hasty Googling.

A couple of white-faced saki, one male and one female, both looking as though one said something mean to the other that morning.

Gorilla on the move. 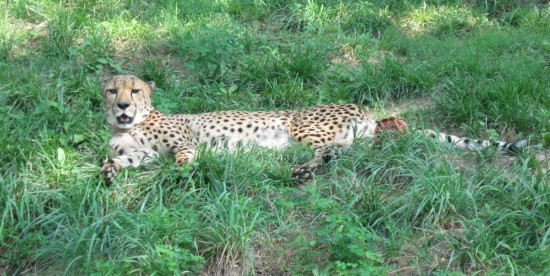 Cheetah with nothing better to do than lay around the pen. 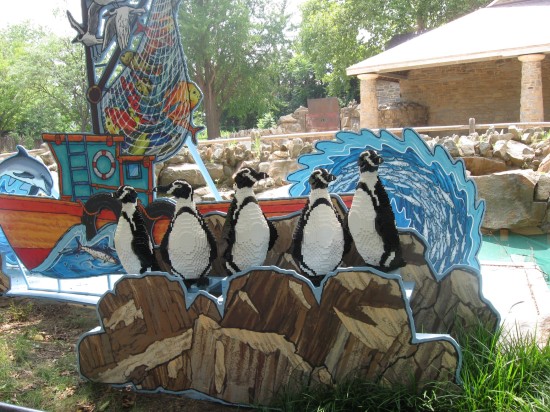 Fake animals also abounded, such as these Lego penguins. 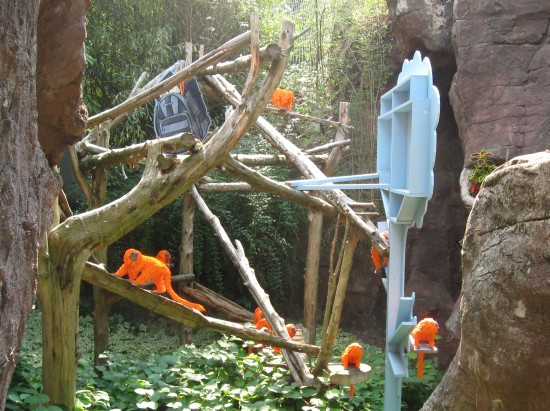 I can safely say we’ve seen Lego Golden Lion Tamarins nowhere in the world except at the Philadelphia Zoo.

If you don’t prefer Lego as an artistic medium, there’s this metal sculpture of a mother lion feeding a warthog to its cubs and nightmares to any underage onlookers. 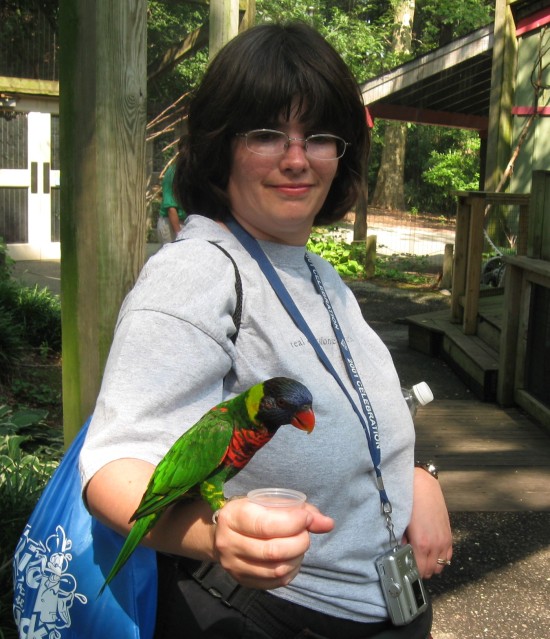 Interactive bird-feeding is always a big hit at your average zoo, and Philly’s was no exception. 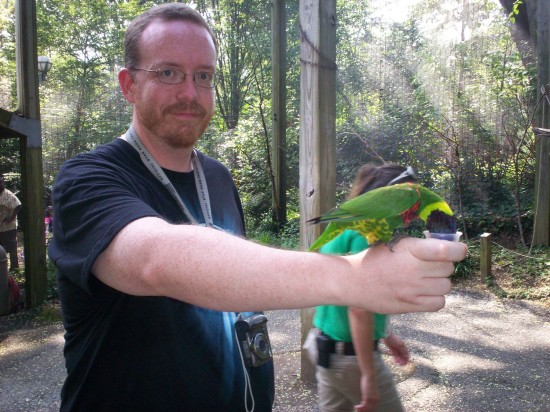 Same, but with this writer instead of his cuter wife.

We look happy in those last two photos, but that attitude was harder to maintain as the afternoon wore on and temperatures refused to drop. Beaten down by the nearly-100-degree heat and let down by numerous offscreen animals that refused to dance for us in said heat, we took our leave half an hour before closing time. We missed one trolley by less than a minute, watching the driver glare at us and rebuff our desperate waves. We crouched down next to some malnourished shrubbery and tried to make the most of this extended opportunity to approach heat exhaustion even more daringly.

[Historical note: some of these animals no longer appear on the zoo’s official site or their Wikipedia page. I’m not sure if that’s because they’ve changed exhibit spaces over the past eight years, or if they’re simply out of season at the moment. Hopefully nothing terrible happened to any of them.]