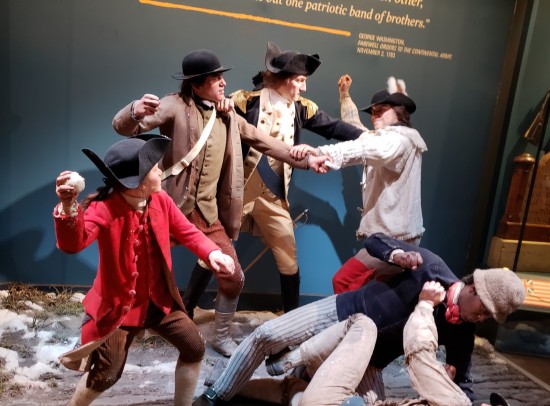 That time in December 1775 in Harvard Yard when an insult match between soldiers turned into a snowball fight, which turned into a big brawl that George Washington had to break up. That escalated quickly.

In our long, long drives through 32 states and counting, we’ve seen a version of Jamestown, Civil War battlefields, the National World War II Museum, and memorials honoring the individual casualties from America’s last 105 years’ worth of wars or so. We still have a few official war museums to cross off, which we expect will follow the pattern — lots of artifacts from the era, probably some writing samples, and of course plenty of photos where applicable.

Philadelphia’s Museum of the American Revolution features 18,000 square feet of exhibits covering the trials and tumults of our nation’s infancy, but begins with a severe disadvantage: 240 years ago, no one thought to take photos, or bothered to invent the camera in a timely manner. If a nation rises but no one Instagrammed it, is it still free? 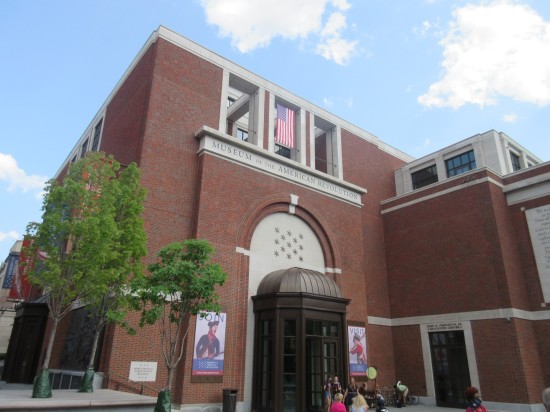 The Museum of the American Revolution doesn’t have the square footage of the National WWII Museum, but it’s not lacking for space. 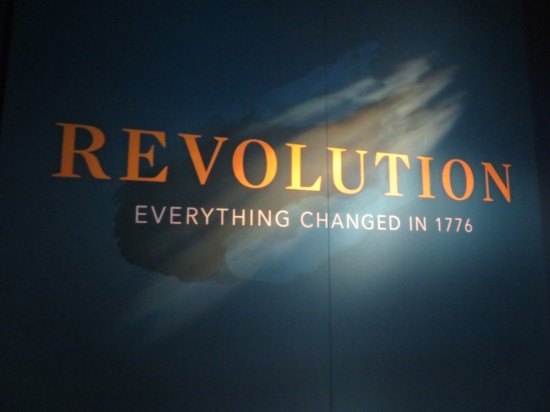 A brief recap wall for any newcomers unfamiliar with that war.

Although many of its exhibits reach back to the 1700s, the museum itself has only been around since April 2017. It’s a relative babe compared to historically pedigreed neighbors such as Independence Hall or Christ Church Burial Ground. Hopefully those other establishments’ keepers are nicer to the MAR than France and Spain were to America when it was still on training wheels. Either way, the museum boasts antiques and relics we’d never seen before, a few of which once knew the touch of some of the Founding Fathers themselves. 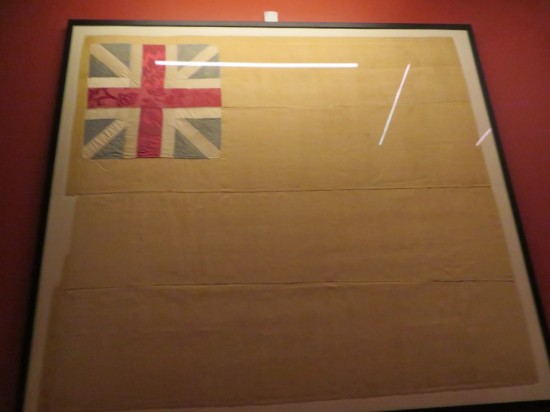 A technically pre-American flag, circa 1775. 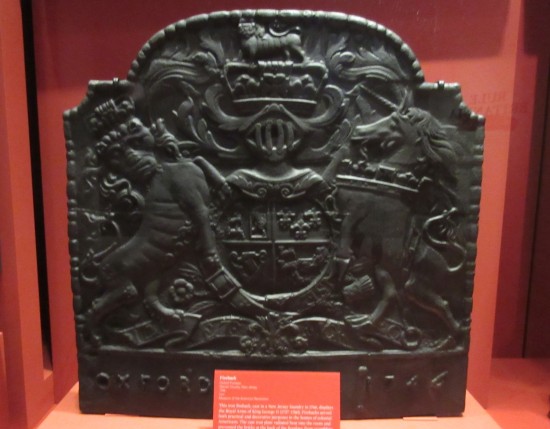 A fireback forged in 1746 in New Jersey, bearing the coat-of-arms of King George II, who ruled England and by extension us through 1760. 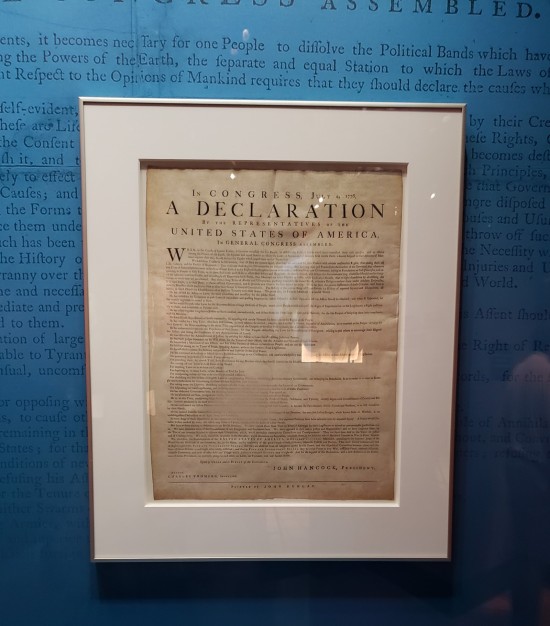 An extremely rare broadside of the Declaration of Independence, printed a few days after the momentous signing.

(That very broadside originally belonged to David Rittenhouse, an astronomer, inventor, philosopher, and at one point Treasurer of Pennsylvania. Fans of NBC’s Timeless may recall one episode featured an evil version of him played by Armin Shimerman.) 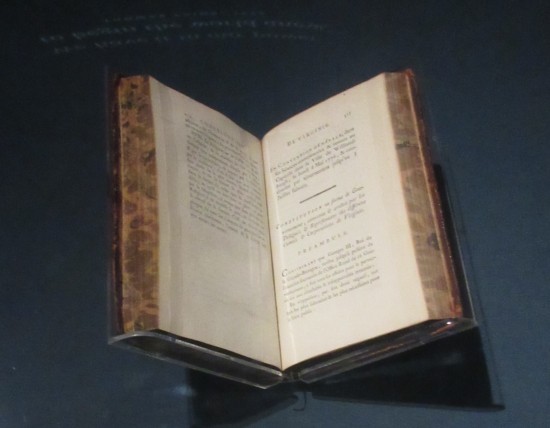 Some of America’s most sacred political documents were translated into French in this 1783 edition. 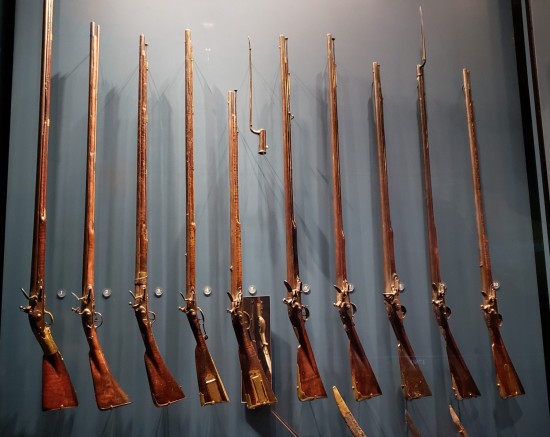 Rifles and muskets used throughout the Revolution. 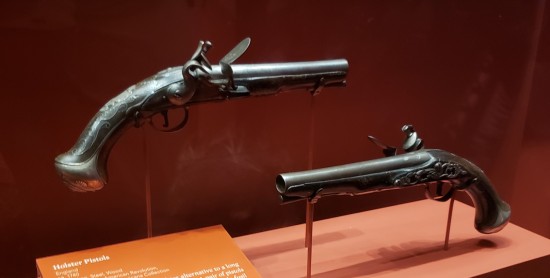 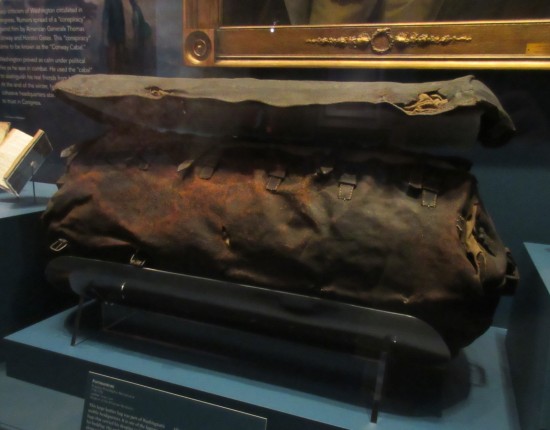 A soldier’s literal portmanteau, which was a thing long before the word took on a second, linguistic fun meaning. 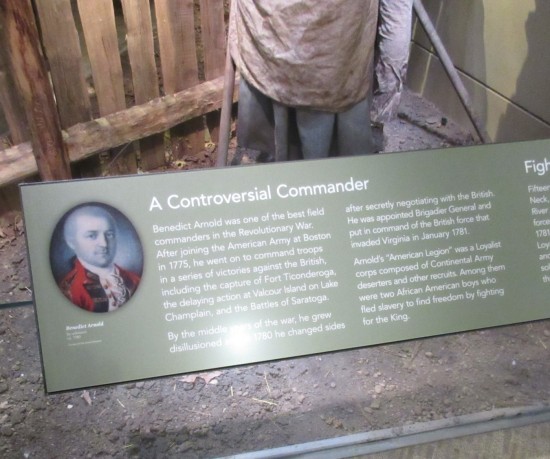 As with Saratoga Battlefield, its monument, and West Point, the considerable contributions of Benedict Arnold before he stabbed us collectively in the back are noted but drastically minimized. Basically he gets this placard near the ground on the far side of an unrelated booth. 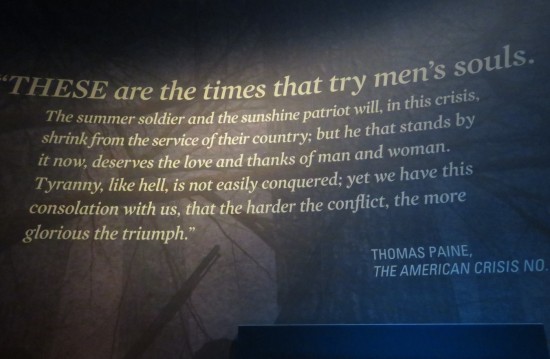 The inspirational words of Thomas Paine.

The museum’s most prized possession is one of the two tents used by General George Washington himself during the war. One does not simply walk into Washington’s tent, or within twenty feet of it. The tent receives its own special presentation at select times throughout the day. Visitors may line up for timed lines, a short presentation, and the dramatic unveiling of the tent behind security glass. It’s old, it’s prestigious, it’s one of those rare accommodations about which one can actually brag, “George Washington Slept Here”.

No photos are allowed during the tent show, but the museum’s gift shop features souvenirs with preprinted professional pics for purchase and memories. 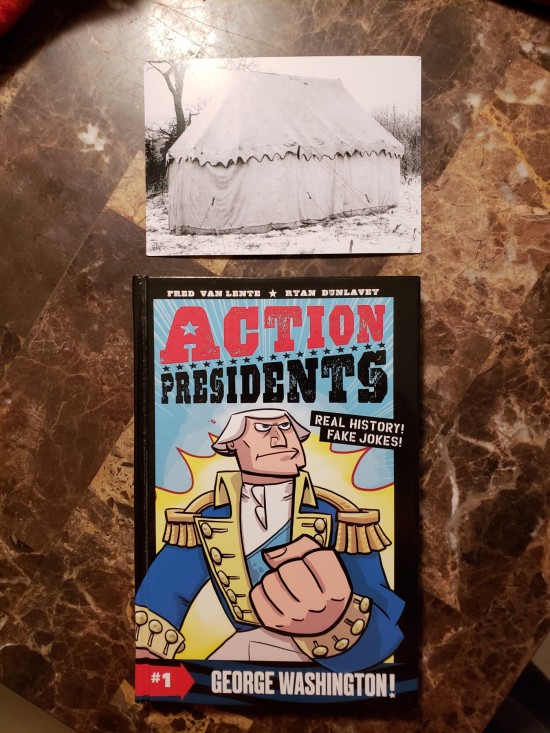 Anne got herself a Washington’s Tent postcard. I went a different direction and picked up the latest nonfiction graphic novel from Fred van Lente and Ryan Dunlavey, creators of other stellar works such as Action Philosophers! and The Comic Book History of Comics.

For lack of 18th-century paparazzi, the Museum’s primary storytelling device is creative statuary, some of which are from the same Brooklyn studio that brought us Signers’ Hall at the Constitution Center. Once again through the hands of StudioEIS, history comes alive and it’s capable of emotive expressions. 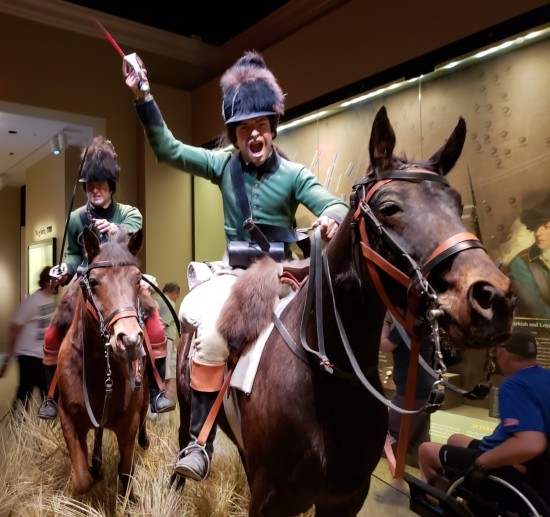 This face, for example. This means WAR. 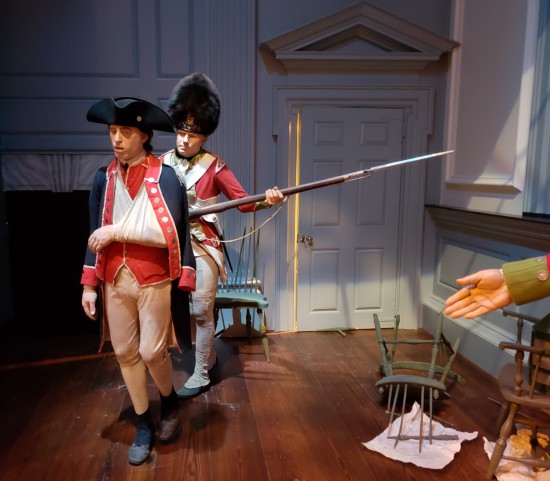 Grim reminder we didn’t win every minute of every skirmish with the Redcoats. 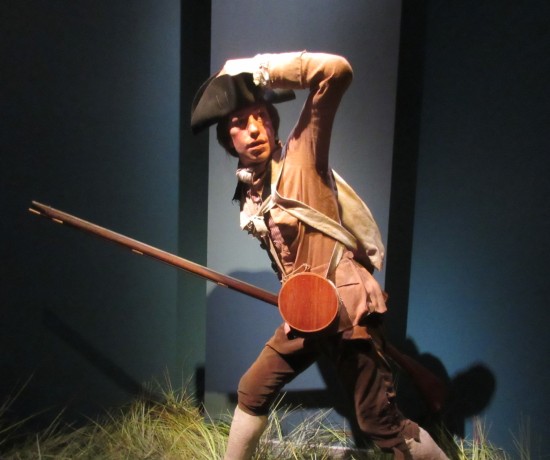 Joseph Plumb Martin was a teenage Continental Army soldier who wrote a meticulous memoir after the war. Anne read it a few weeks ago and strongly recommends it to anyone wanting to hear more in-depth about life during wartime. 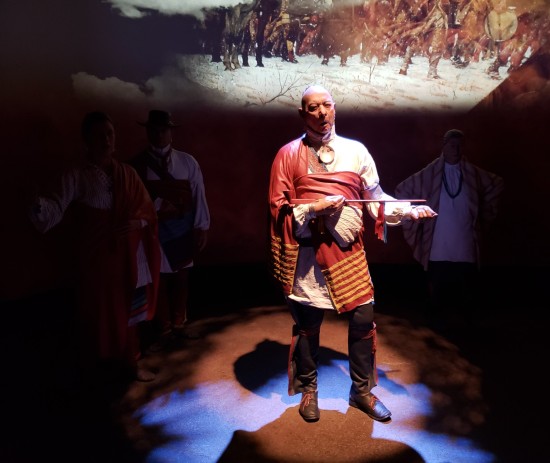 An entire room is devoted to the story of the Oneida Nation and the significant assistance they gave the colonists against the British. 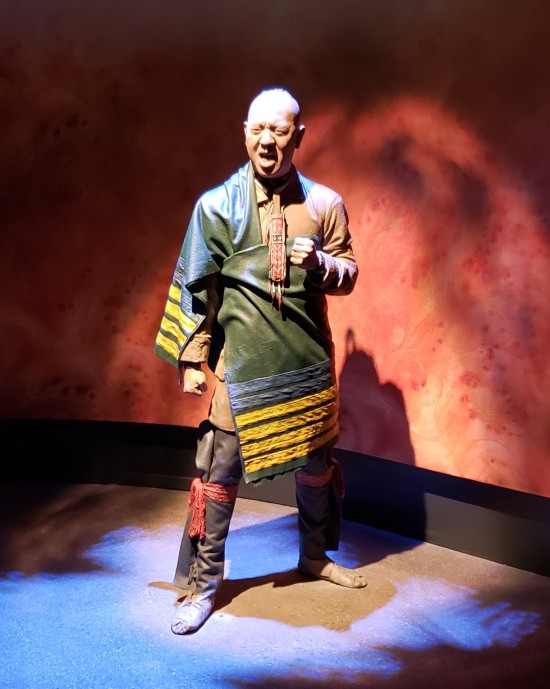 …and by “assistance” I don’t mean Thanksgiving cooking. I mean warriors.

(As thanks for their contributions, future President Washington granted them a latitude of 6 million independent acres. Over the ages, the State of New York curtailed that to *checks notes* uh, thirty-two.) 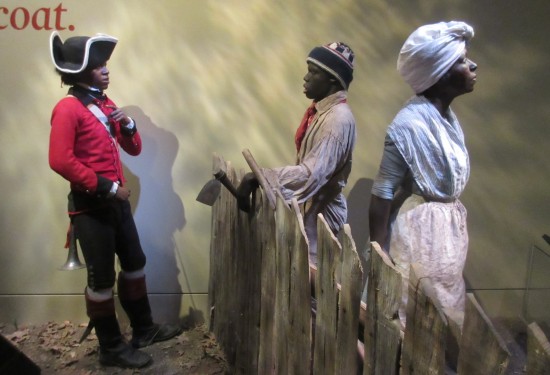 African slaves, already subject to indignities and hardships beyond belief or basic human morality, faced hard choices regarding their roles during the war. Well, those afforded the luxury of choice. 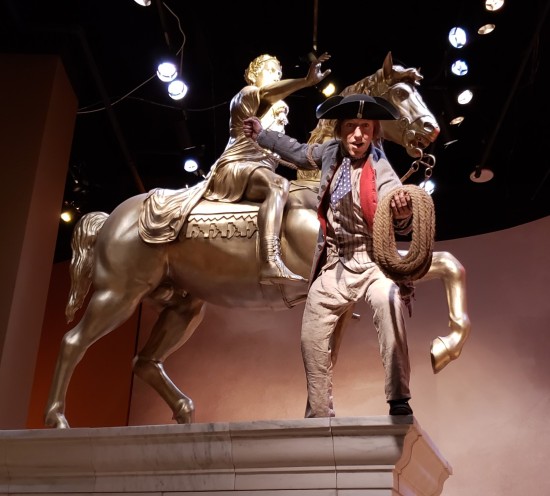 One of the Museum’s favorite scenes: on July 9, 1776, newly declared Americans threw ropes around the bronze King George III statue in NYC’s Bowling Green, toppled it, and melted it down to make weapons and ammo. That’s one way to celebrate independence and kick off a revolution.