The Saratoga Monument marks not just a milestone in American history, but also the northeast corner of our trip route.

The average American battlefield tour is 70% grassy fields and 30% statues and sculptures everywhere. At least, that was my assessment on last year’s drive to Baltimore, which featured stops at two Civil War battlefields in Antietam and Gettysburg. Anne, American history aficionado that she is, was delighted to discover key sites along or near our path honoring the original American Revolution itself.

Two hours farther east of Utica, plus a lunchtime intermission in an unrelated town, brought us to Saratoga National Historic Park. After several speeches and a few altercations with the British Army here and there, in this vicinity in 1777 our Revolutionary War scored its first major victory and took its first steps toward becoming a recognized world power. It was our forefathers’ performance at the second Battle of Saratoga in particular that convinced France and other nations that America meant to be taken seriously in its quest to become a real, live country.

Our first stop was the obligatory Visitors Center, with a few indoor artifacts setting up some of the narrative. We appreciated the offer of a free twenty-minute film prior to starting our trek, but we tend to skip those at historical sites. Anne walks into such places with knowledge, context, and to-do list already firmly in mind, while I try to keep up with the entire paragraphs of exposition she’ll drop for me as needed.

Most of the park is a series of glades with a ten-mile driving path connecting the major exhibits and historical constructs.

Among the American leaders who led our troops to victory, four were key to the main storyline in the struggle against the Big Bad, British General John Burgoyne, who had paid cash for a few of his promotions:

To be fair, it helped that Burgoyne had been expecting backup that never arrived. He was given the send-off of a gentlemanly whipped weasel and shipped back to Britain, where he spent the rest of his days meddling in politics and writing plays no one remembers.

As with the Civil War Battlefields, monuments and statues abound — some name-checking famous personages, some saluting specific regiments, some remembering relative strangers of note to someone, if not necessarily to ruling historians.

Marker for the Unknown Soldiers who perished among the nearly 1500 casualties and losses on both sides. Roughly one-third of those were on our side.

The very spot where Morgan made the reluctant but necessary decision to order a sniper to take out General Simon Fraser, a Redcoat officer he respected but who was on the wrong side of history.

Tribute to Timothy Murphy, son of Irish immigrants and Morgan’s Rifleman ordered to take the killshot on Fraser. Or Frazer. The monuments disagree on the spelling.

Smaller tribute to the “gentle and gallant” Fraser, a proud Scotsman whose biggest postwar claim to fame is an appearance as a supporting character in one of Diana Gabaldon’s Outlander novels. 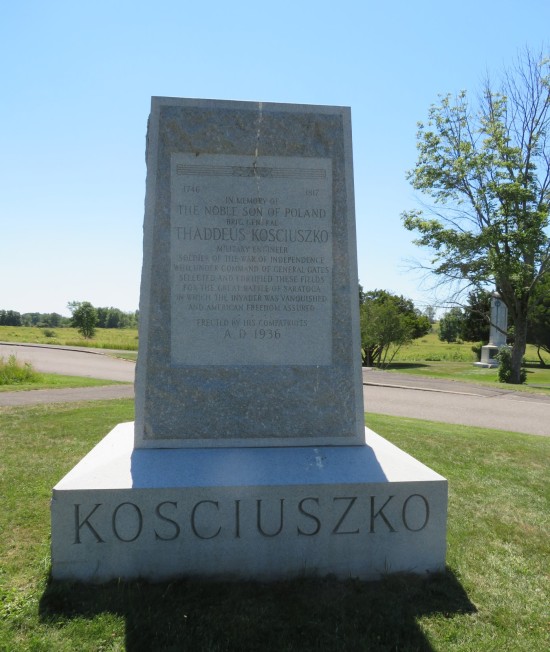 Shout-out to Tadeusz Kościuszko, a Polish engineer who helped fortify the American defenses before the British arrived. After the war he returned to Europe, where freedom-fighter skills would come in handy for him.

Props to Brigadier General Abraham Ten Broeck, Dutch businessman who immigrated, became an assemblyman, led the local militia on our behalf, and then became mayor of Albany, NY. One of his daughters later married one of Schuyler’s sons.

The cool, shady spot where a guy in British middle-management got what was coming to him during the second Battle.

Two more reminders of the Battles of Saratoga are located off the official grounds. A few miles north of the park stands the General Philip Schuyler House, on the plot where his country home once stood until Burgoyne had his men burn it down before the Battles. After the British surrendered to Our Heroes, Schuyler had it rebuilt immediately. 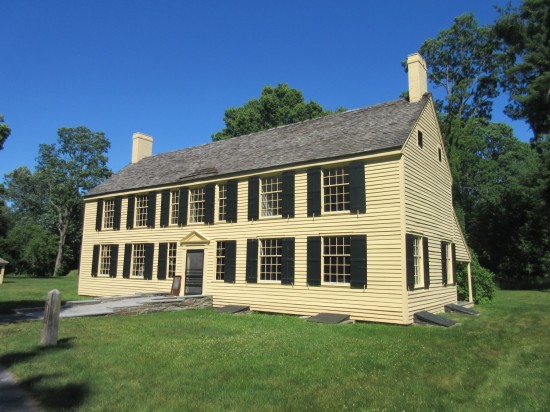 Interior tours are available daily if you arrive earlier than we did.

A few more miles north is the town of Saratoga Springs, where visitors can walk through Victory Woods, last refuge of the British before they finally gave up. 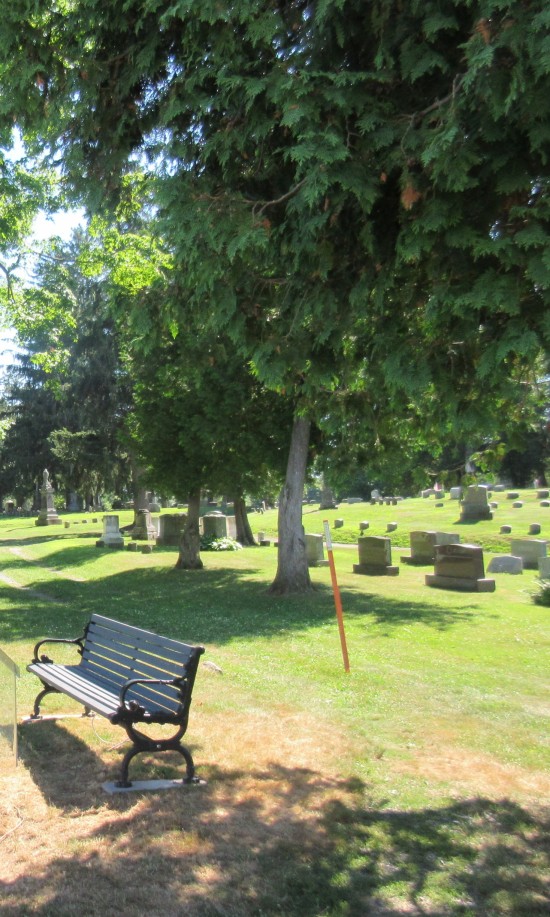 Walk where the losers walked. Muse long and loudly about their unfortunate choices.

Next door to the forest is the subject of our lead photo — the Saratoga Monument, a 155-foot obelisk erected in 1883 to draw attention to where our opponents made their last stand and got trounced. On each of its four sides is an alcove in honor of the four MVPs noted above.

Philip Schuyler, who was acquitted at that court martial and threw himself more into political offices and factory management after the war…which, um, included acquiring more slaves. 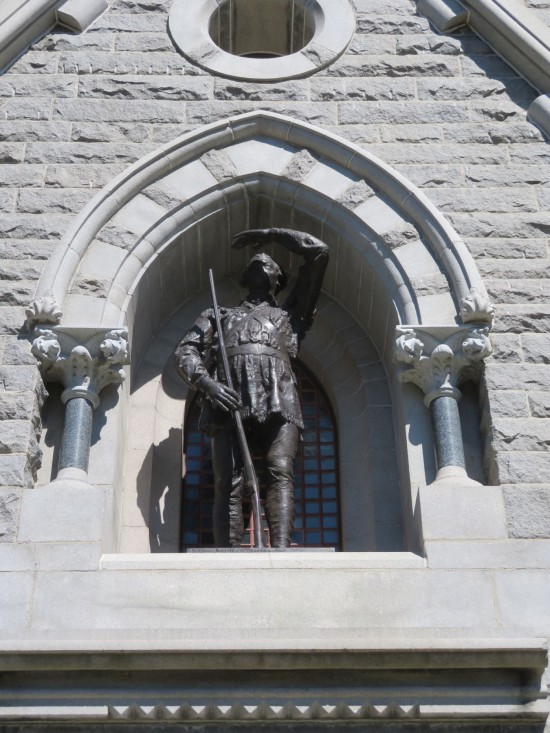 Daniel Morgan, who tried to retire after the war, but they kept pulling him back in. Further adventures including helping quell the Whiskey Rebellion of 1791, an early prototype of Occupy Pittsburgh.

Horatio Gates, whose miserable failure at 1780’s Battle of Camden destroyed his military career. Postwar, he freed his slaves and moved from Virginia to Manhattan to run out the clock. He’s buried under one of the unreadable tombstones at Trinity Church Cemetery, a stop on our 2011 road trip.

Benedict Arnold, who gets a dedicated hole in the wall but not a statue because screw that guy.

Saratoga presented a challenge for historians that’s become more commonplace in 21st-century debates: how do you honor the verifiable, absolutely pivotal good deeds of someone who later committed acts so utterly despicable that it sucks to reflect on them in hindsight?

Without Arnold, Saratoga could’ve gone radically differently, and by extension the course of the American Revolution itself. Then he got angry later and stabbed America collectively in the back by siding with the British once more. But it would be ahistorical and flat-out lying to pretend Arnold contributed nothing to the victory at Saratoga. It would leave a noticeable gap if you simply skip his parts in the retelling. And there’s no option to go back in time and replace Arnold with Christopher Plummer yet.

Hence the creative solution: the hurrah-not-hurrah of Arnold’s empty shelf on the monument. It’s not the only nod to him in the area, either.

Deep in the middle of Saratoga Battlefield is one of its most peculiar memorials, the only one standing inside a fenced enclosure to prevent manhandling. On one side, an inscription addressed to “the most brilliant soldier of the Continental Army” — the 1887 handiwork of benefactor John Watts de Peyster, a historian who served in the Union Army during the Civil War.

His name is mentioned nowhere at all. If you don’t know what you’re looking at, for all you know this could be a self-salute by General Gates.

On the other side, a telltale boot — commemorating the spot during the second Battle where Arnold’s leg was severely damaged by a combination of gunfire and falling horse. It was a grave wound he took on behalf of the nation he was helping to solidify, right before he turned around and wounded her back. 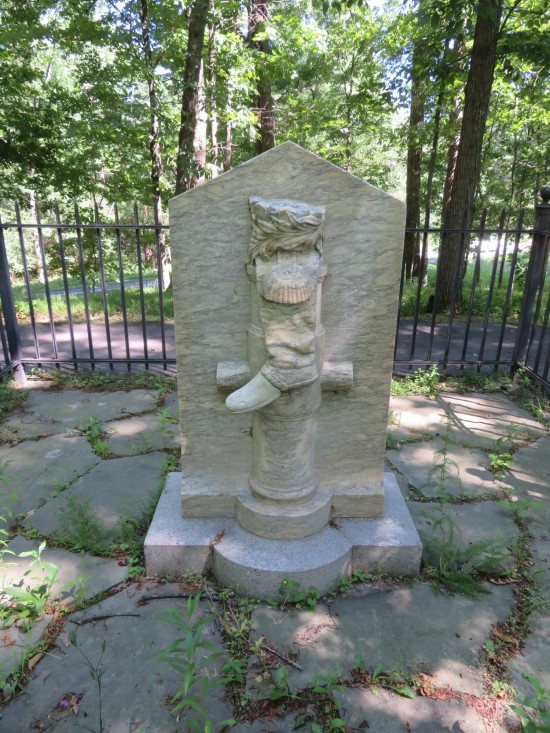 Thus we encountered the harsh truth about Benedict Arnold: before his retreat to the Dark Side, it was at Saratoga that he lost his sole.