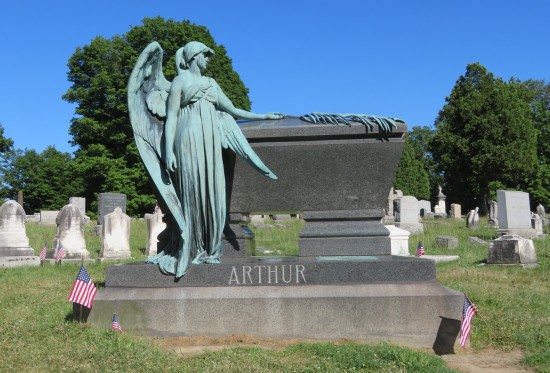 For those a bit mystified that this vacation was supposed to be all about dead Presidents and are getting impatient because our last Presidential burial site was nine chapters ago: fear not! We’re getting there. They weren’t exactly next door to each other, and upstate New York has so many excuses for detours, we couldn’t possibly pass them all by. The nine-President plan was a goal, not a vendetta.

Our next stop was forty minutes due south of Saratoga National Historic Park, part country roads and part interstate. This leg of our trip gave us our last glimpse of the remaining components of the Erie Canal as it headed eastward without out. We’d crossed a few other portions over the past two days, but this was the only time either of us had our cameras ready to catch it.

The Thaddeus Kosciuszko Bridge crosses the Mohawk River, a.k.a. the Erie Canal ’round this particular area. The canal comprises a few different waterways in all. 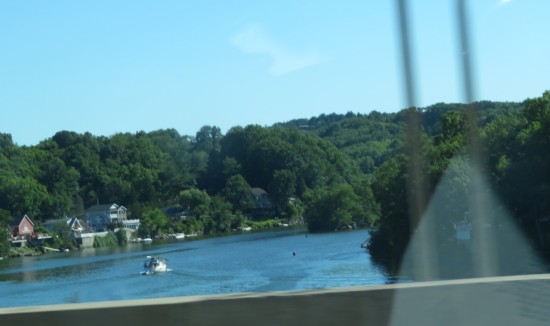 Fleeting glimpse of the Erie/Mohawk. We’ll have much better photos of another famous river in a future chapter, but it won’t be the Erie Canal.

The third President of the United States of America on our itinerary was buried at Albany Rural Cemetery, in the heart of New York’s state capital. We arrived during rush hour and were the only visitors around because who visits graves right before dinnertime? Having the narrow gravel roads all to ourselves was a pleasant convenience. 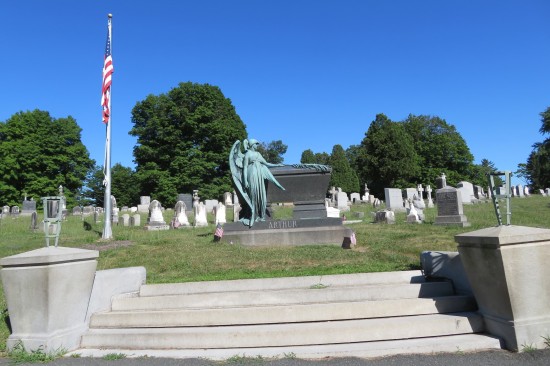 Their map wasn’t the best, but the flagpole was a good, visible homing beacon.

Chester A. Arthur isn’t one of those Presidents with an anthology of memorable anecdotes to his name. As one of the only five Presidents who never actually won a Presidential election, Arthur was the Vice President who got promoted upon the assassination of James Garfield in 1881, mere months after they took office. He’d served a number of previous positions as part of Roscoe Conkling’s corrupt political machine, but spent much of his term extracting himself from their clutches and stymieing their self-serving plans with a number of initiatives. Nearly all of Garfield’s appointed cabinet resigned over the next few years and had to be replaced, with one exception — Secretary of War Robert Todd Lincoln, who knew a thing or two about the tragic side effects of Presidential assassination.

Signing the Chinese Exclusion Act into law, effectively prohibiting Chinese immigration into America for decades, was not a shining moment. Modern citizens may also scoff at the idea of an administration that had to deal with the burden of a budget surplus, which is a thing America once had and found vexing. Arthur died a mere two years after leaving office, not nearly enough time to establish any viable post-White House legacy or enjoy retirement. On the upside, he got a school named after him in Die Hard with a Vengeance, though it was ultimately a red herring.

The official cemetery map points out dozens of names of local legends and late, lamented personalities that doubtlessly meant a lot to nearby voters and residents. To us outsiders only one other name stood out: Major General Philip Schuyler, father-in-law of Alexander Hamilton and a Revolutionary War hero given due credit at our last stop. 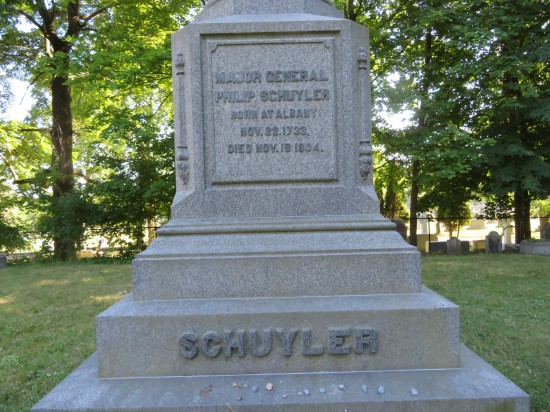 Schuyler passed away at age 70, much older than Arthur had been when his time came.

Schuyler’s monument is also much taller than Arthur’s. It pays to be a hometown hero. Arthur was born in Vermont, but later came to have family ties here.

Arthur’s grave has one feature Schuyler’s lacks: an expensive sculpture. Standing guard at his final resting place is the bronze “Angel of Sorrow” commissioned from Baltimore sculptor Ephraim Keyser. 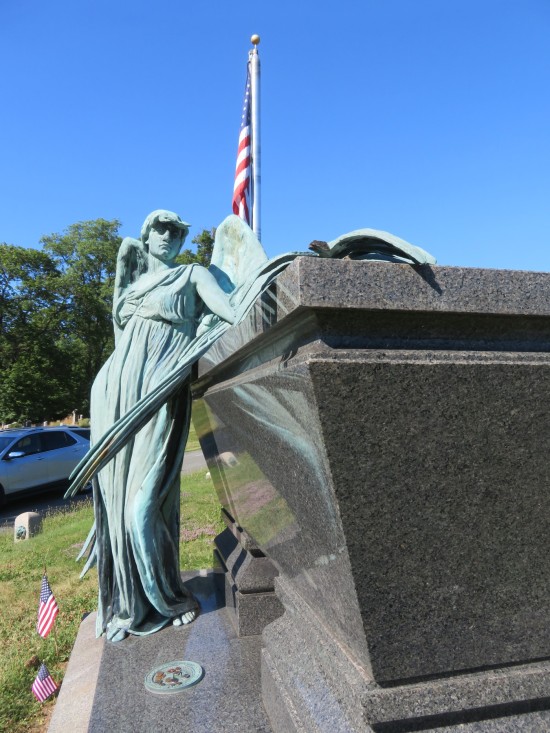 “Angel of Sorrow” was paid for with a collection of friends’ funds totaling $10,000.00, which was his annual salary at some of his old jobs.

The tombstones of several family members stand behind his crypt. Arthur and his wife Ellen had three children, but she passed away ten months before he and Garfield won the 1880 election. His sister Mary Arthur McElroy, an anti-suffragist with a seminary background, served as his de facto First Lady for his entire partial term. She’s also buried in Albany Rural Cemetery but isn’t listed among the official personalities of note. I understand the staff will direct visitors who ask to see her or her husband’s plots.

At left is Ellen; at right is a prepaid stone for their middle child Chester Alan Arthur II; his second wife Rowena, who actually passed away in Colorado Springs and has a second gravestone out there; and his son Chester III from his first marriage. Later taking the name “Gavin” during a life of numerous decidedly non-Presidential adventures, Gavin’s ashes were scattered off the California coast after his death in 1972. 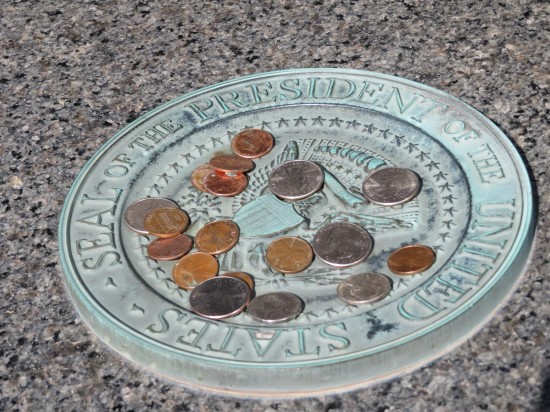 Spare change left on the Presidential seal by visitors who mistook it for either a very shallow wishing well or a “leave a penny/take a penny” dish.